The Japan International Cooperation Agency (JICA) has supported Vietnam in controlling the use and disposal of fluorocarbon gas (F-gas) as part of efforts to help the country advance its implementation of the Paris Agreement.

Since July 2020, JICA has been implementing a “Survey on promoting the climate change framework under the Paris Agreement Rulebook in Vietnam” that contributes to the country’s process to phase down F-gas from 2024.

The latest effort was a workshop held on April 28 to exchange experiences on F-gas management among Vietnam and other countries like Japan, Australia, Singapore, and Malaysia.

Jointly organized by JICA and the Department of Climate Change (DCC) under Vietnam’s Ministry of Natural Resources and Environment (MoNRE), the event address both challenges and solutions in F-gas management in Vietnam by regional speakers.

They agreed that Asian countries need to join hands to take actions on phasing down Hydrofluorocarbons (HFCs) -common F-gases- to meet the targets set out in the Kigali Amendment and contribute to the Paris Agreement.

“Together with the Initiative on Fluorocarbons Life Cycle Management of the Government of Japan, which Vietnam agreed to join in October last year, technical analysis on current management of F-gas in Vietnam by JICA’s Japanese experts will help MoNRE in formulation of specific regulations to control the use and disposal of F-gases,” said Murooka Naomichi, Senior Representative of JICA Vietnam Office.

We also hope that our experiences on using appropriate technologies for recovery and destruction of F-gases are also useful for Vietnamese companies when the Government implement strict measures for F-gas management”, he added.

Dr. Tang The Cuong, general director of DCC, said “Learning from experiences of Japan and other countries will help us to come up with effective HFC control measures and particularly to stimulate the private sector to convert into more environment friendly technologies.”

In addition, Vietnam reconfirmed its commitment in joining the global efforts in combating climate change with the Chapter on Responding to Climate Change in the revised LEP, which was adopted in November 2020 by the National Assembly.

The law sets important rules and principles for Vietnam to strictly control the consumption of F-gases in order to ensure the implementation of the Kigali Amendment to the Montreal Protocol, an international treaty on F-gases, which Vietnam has been a signatory since September 2019.

HFCs are widely used as a refrigerant in household and industrial air conditioners, refrigerators, cleaning precision electronic equipment, spray propellants, urethane used in building materials, etc. HFCs have much higher global warming potential than CO2 and if released, they stay in the atmosphere for decades. 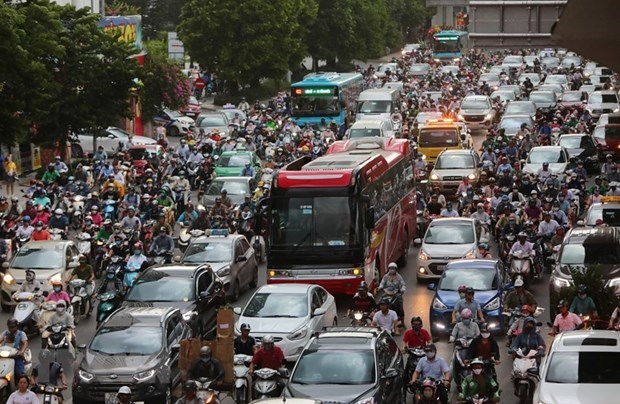 Illustrative image (Photo: VNA)
Hanoi (VNS/VNA) – The Ministry of Natural Resources and Environment (MoNRE) has urged relevant agencies to quickly complete the report on the implementation of the roadmap to apply emission standards to motor vehicles.

In the document sent to agencies, MoNRE asked the ministries of Transport, Industry and Trade, Science and Technology, Finance and Public Security to complete their report before May 31.

The Ministry of Transport is responsible for evaluating the implementation of the roadmap for the application of emission standards for motor vehicles and difficulties in implementation.

The agency is also responsible for proposing the adjustment of the ongoing roadmap of emissions standards, tightening the emission standards, conversion and elimination of means of transport using fossil fuels, or vehicles causing environmental pollution and development of environmentally friendly vehicles.

It will assess the building and implementation of national technical standards on emissions, the capacity of registration establishments and quality assessment of exhaust gases from motorcycles under the pilot programme on motorbike emission control in Hanoi and Ho Chi Minh City.

The Ministry of Industry and Trade will evaluate the capacity of manufacturers, importers and suppliers of fuel used for motor vehicles in accordance with national technical regulations and the roadmap for application of emission standards; report fuel statistics data used for vehicles from 2008 to 2020 as well as difficulties in implementation.

The Ministry of Science and Technology will conduct an assessment on the application of technical standards on emissions and fuel for vehicles.

Meanwhile, the Ministry of Finance will report on the building and issuance of the emissions testing fee for vehicles; financial mechanism to support fuel production and trading enterprises; as well as statistics on the number of motor vehicles imported from 2008.

The Ministry of Public Security will compile the annual registration of vehicles from 2008; the number of recovered and removed vehicles due to expired registrations; proposals and recommendations on the management of motor vehicles; as well as revoke outdated vehicles./.