Son was born in 1962, a native of Hanoi. He has been with the Ministry of Foreign Affairs for more than 30 years and has built up a wide range of experience and expertise in various fields of bilateral and multilateral diplomacy.

He graduated in 1984 from the University of Diplomacy (now the Diplomatic Academy of Vietnam) and obtained a Master’s degree in International Affairs from Columbia University (USA) in 1993.

Son began his diplomatic career in November 1987 as a researcher at the Institute for International Relations, Ministry of Foreign Affairs.

From March 1996, he was designated as the Deputy Head and then the Head of Euro-American Committee, Chief of Office, Institute for International Relations, Ministry of Foreign Affairs.

From March 2000 to July 2003, he was the Minister Counselor at the Embassy of Vietnam to the Republic of Singapore, before returning to the Department for Foreign Policies of the Ministry of Foreign Affairs.

Between September 2008 to November 2009, he acted as the Assistant Minister of Foreign Affairs and the Director General of the Department for Foreign Policies. He was Vietnam’s Chief Negotiator for the Partnership and Comprehensive Cooperation Agreements (PCA) between Vietnam and the EU from November 2008 to June 2012. 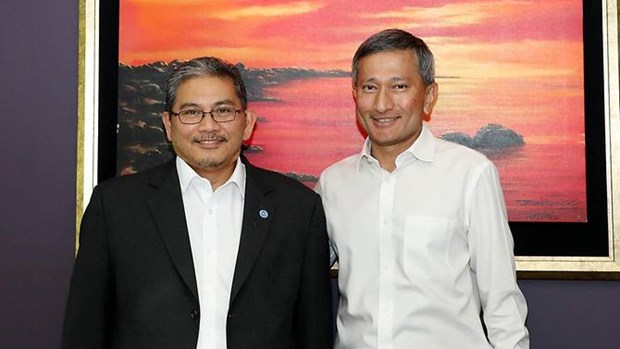 Hanoi (VNA) – Singapore ’s Minister for Foreign Affairs Vivian Balakrishnan will be making an official visit to Brunei, Malaysia and Indonesia from March 22, said the Singaporean Ministry of Foreign Affairs.

The first stopover for Balakrishnan will be Brunei, the ministry said, adding that the visit reaffirms the “close and longstanding special relationship” between the two countries.

The ministry did not elaborate on the purpose of the visit, but last week Indonesia n President Joko Widodo called for a meeting of Southeast Asian leaders to discuss the crisis in Myanmar.

Brunei is the current chair of the Association of South East Asian Nations (ASEAN)./.

Singapore (VNA) – Singapore’s Minister for Foreign Affairs Vivian Balakrishnan on March 22 paid a visit to Brunei to reaffirm the special and unique relationship between the two countries.

Minister Balakrishnan had an audience with Sultan of Brunei Hassanal Bolkiah and was hosted to lunch by his Brunei counterpart, Second Minister of Foreign Affairs Erywan Pehin Yusof, Singapore’s Ministry of Foreign Affairs said in a statement.

They discussed ASEAN’s role in regional cooperation under Brunei’s Chairmanship this year.

Minister Balakrishnan will travel to Malaysia and Indonesia on March 23 – 24. 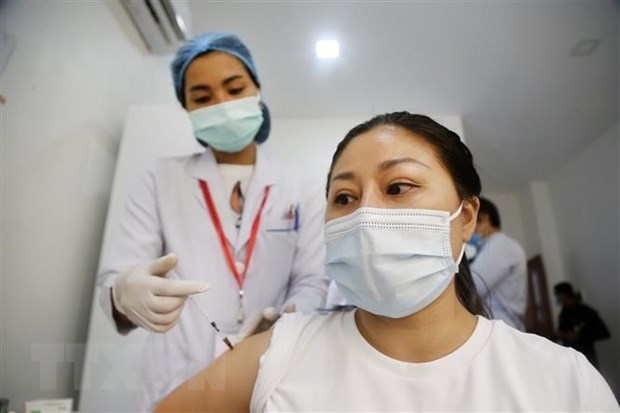 Illustrative image (Photo: Xinhua)
Phnom Penh (VNA) – The Cambodian Ministry of Foreign Affairs and International Cooperation has announced that vaccinations for foreigners living in the country will begin on a voluntary basis.
In a press release issued on March 29, the ministry required embassies and overseas diplomatic agencies to provide a list of their citizens living in the country, including full name, age, passport number, occupation and place of residence.

In a message posted on Facebook on March 29, Cambodian Prime Minister Hun Sen affirmed the goal of vaccinating 1 million people in Cambodia each month, firstly about 500,000 in April.

As scheduled on March 31, Cambodia will receive 700,000 doses of Sinopharm vaccine donated by the Chinese Government.

The country has so far received three types of COVID-19 vaccines, including 600,000 Sinopharm doses from China in February, 324,000 AstraZeneca manufactured by India in March and 1.5 million Sinovac doses on March 26./.

Independence and self-reliance have been the guiding principles for the Ministry of Foreign Affairs (MoFA) since its inception on August 28, 1945 under the direct leadership of State President Ho Chi Minh.

“Independence means we handle all our affairs without any external interventions. The core and main principle in our political, military, economic, and internal and external affairs is self-reliance,” Deputy Prime Minister and Foreign Minister Pham Binh Minh quoted the late President Ho Chi Minh in an article celebrating the 69th anniversary of August Revolution Day and the MoFA’s 69th anniversary.

Therefore, preserving independence and self-reliance has always been a guiding principle for external activities to safeguard the nation’s interests, Minh noted.

By persistently pursuing these principles over the past 69 years, Vietnam has defended its national interests, Minh affirmed, referring to the successes at the 1954 Geneva conference and the 1973 Paris conference.

During the Doi Moi (Renewal) process, Vietnam applied the policy creatively, diversifying her external relations to avoid having to depend on one large country or a group of countries, Minh said.

Vietnam has so far established diplomatic relations with 184 countries and forged economic and investment ties with 230 countries and territories all over the world.

The country has normalised its ties with China and the US, and joined the Association of Southeast Asian Nations (ASEAN) and the World Trade Organisation (WTO). Vietnam is now negotiating the terms of the Trans-Pacific Economic Partnership.

Minh pointed out the challenges the present era of globalisation, integration, and dependence is posing to the mission of firmly defending independence and self-reliance.

Global issues, such as climate change, water security, epidemics, and terrorism, are beyond the control of a single country and could negatively affect the country’s ability to maintain independence and self-reliance, and safeguard national interests, the official wrote.

To overcome these challenges, Vietnam needs to further improve the efficiency of external affairs; deepen relations; and reinforce ties with large countries, powerful centres and influential multi-lateral organisations, he said.

In addition, the country should proactively participate in the current global paradigms of peace, cooperation and development; scientific and technological revolution; and globalisation and international integration.

With the global and regional order evolving, Vietnam should be proactive in regards to external affairs, whilst constantly and incessantly improving the capacity of diplomatic staff, Minh stated.

He expressed his faith in current and future diplomatic staff holding on to the principles of independence and self-reliance to serve national interests.

“Whatever we do, be sure we do it for national interests,” Minh quoted President Ho Chi Minh. 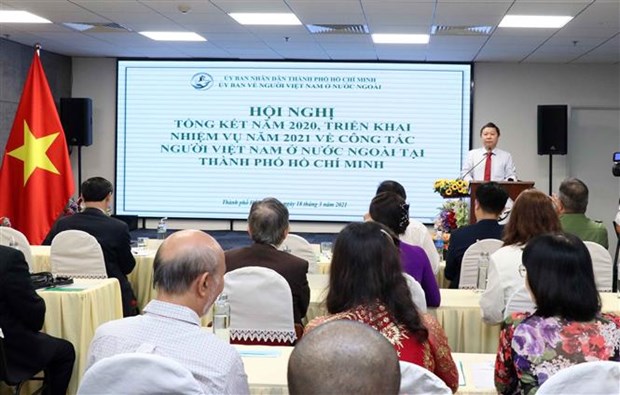 An overview of the conference (Photo: VNA)

HCM City (VNA) – The Ho Chi Minh City Committee for Overseas Vietnamese (OV) Affairs must continue to perform well in implementing State management over OVs in the city, giving advice on caring for poor Vietnamese abroad and connecting city leaders and OVs, and strengthening communications on Party and State policies and laws among the community, a city leader has said.

Addressing a conference to kick-start the committee’s tasks in 2021, Vice Chairman of the HCM City People’s Committee Duong Anh Duc said the committee and the OV community made major contributions in 2020 to the city’s success in implementing the “twin targets” of combating COVID-19 and boosting economic development.

He noted that the city’s gross regional domestic product (GRDP) grew 1.39 percent during the year, while exports hit 43.8 billion USD, up 3.1 percent year-on-year.

It granted licences to 950 foreign-invested projects worth 4.36 billion USD, he noted, adding that remittances last year reached 6.1 billion USD, a 15 percent increase against 2019.

He asked the committee to continue reforming operational content and methods, focusing on the city’s 2021 motto of building urban administration and improving the investment environment, while continuing to give advice to city leaders on the gathering of ideas from OVs regarding digital transformation, digital economy, and other programmes of the city.

Speaking at the event, Ambassador Luong Thanh Nghi hailed the success of the city’s Committee for OV Affairs in 2020 and underlined the potential the OV community holds as well as their aspirations to contribute to national construction, defence, and development.

He said he hopes that the committee will continue to promote its achievements, supporting the Vietnamese community abroard in maintaining traditional cultural activities and strengthening their connectivity to help them make more contributions to the development of the city and the country as a whole in the current period.

In 2021, the committee aims to continue expanding activities for the community, including organising exchanges and get-together programmes as well as other events to gather their ideas on the city’s development.

On the occasion, the city’s committee presented Ministry of Foreign Affairs’ Certificates of Merit to Vo Thanh Chat, Vice Chairman of the HCM City Committee for Overseas Vietnamese Affairs, and a number of collectives and individuals showing outstanding performance in people diplomacy./.