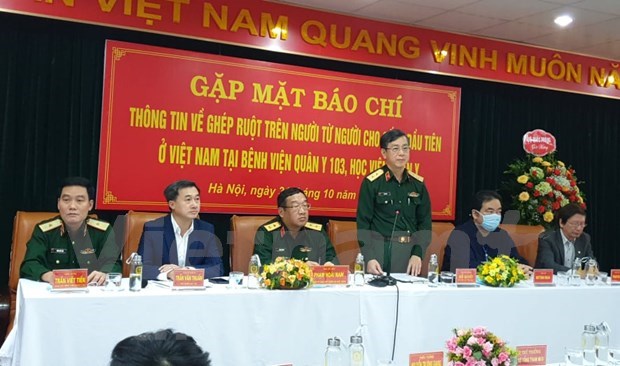 Hanoi (VNA) – The two live donors were in stable conditions after the operations. Meanwhile, the patients were under intensive care and close watch of medical workers, with stable vital indicators. bowel transplants from live donors have been carried out successfully for the first time.

Director of the Military Medical University Prof. Dr. Lieut. Gen. Do Quyet said with this success, Vietnam has made into the list of 22 countries in the world to perform such a complex surgery.

To date, Vietnamese doctors have performed about 1,000 bowel transplants.

Deputy Minister of Health Tran Van Thuan noted that the Military Medical University is one of the leading medical establishments of Vietnam in scientific research and extended his congratulations to the university on its accomplishments.

It is the first Vietnamese medical establishment to successfully perform bowel transplant on human, marking a significant progress in the medical sector.

The first patient was Nguyen Van D., aged 42, who underwent five bowel surgeries at various hospitals due to peritonitis, caused by colon perforation. He had a large part of small intestine removed, leaving the organ spanning only 80 cm in May 2007.

He was admitted to the Hanoi-based Military Hospital 103 under the Military Medical University on May 2 this year because of intestinal failure triggered by short bowel syndrome, type 1 and bowel incontinence.

The patient had been under intravenous feeding, a method of getting nutrition into the body through the veins, to fight against disorders caused by intestinal failure.

The other patient was a 26-year-old man named Lo Van T. In early September this year, he was diagnosed to suffer from peritonitis due to necrosis in his entire small intestine.

He had most of his small intestine removed at a hospital in Than Uyen district of the northwestern mountainous border province of Lai Chau. The organ measured nearly 20 cm in length.

The patient was transferred to the Military Hospital 103 on September 29 owning to fatigue and exhaustion caused by short bowel syndrome, type 3.

He was also under intravenous feeding and later diagnosed with liver disease associated with intestinal failure in the small bowel syndrome.

Upon receiving the two patients, the Military Medical University had consulted experts in the field, determining that both of them had stable indexes for bowel transplant.

The university then sought permission from the Ministry of Health to perform the surgeries at the Military Hospital 103 .

The operations were performed on October 27-28 by doctors of the hospital and their colleagues from Japan’s Tohoku University Hospital.

Lo Van T., 26, got a bowel section from his mother, 47. The first patient, Nguyen Van D., received a healthy bowel from his younger brother, 40.

In 2019, the Military Medical Hospital was assigned by the Ministry of Science and Technology to carry out research on bowel transplant from live donors, and Prof. Dr. Lieut. Gen. Quyet was the head of the research team.

The successful surgery would open up more opportunities for patients who are in need of bowel transplants, Quyet said.

In January, Vietnam conducted the world’s first limb transplant from a live donor. The operation was carried out by doctors of the Central Military Hospital 108 in Hanoi./. 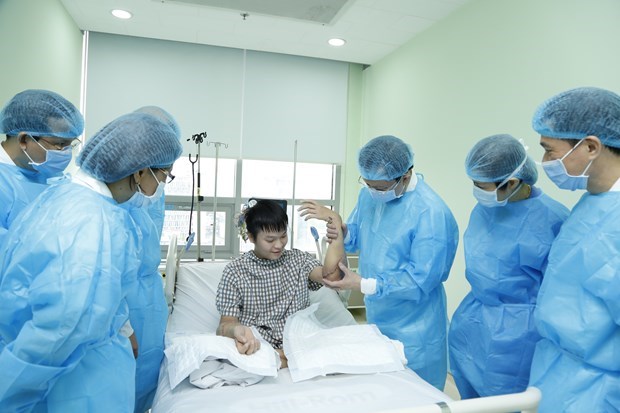 The double forearm transplant for an 18-year-old patient (Photo: VietnamPlus)

This is also the fourth time the hospital has implemented organ procurement and transplant at the same time. The organs, which were taken from a brain-dead donor, were transplanted to six patients. Wishing for normal arms Human organ transplantation is one of the most successful advances in the 20th century worldwide, as dozens of thousands of patients have been saved. 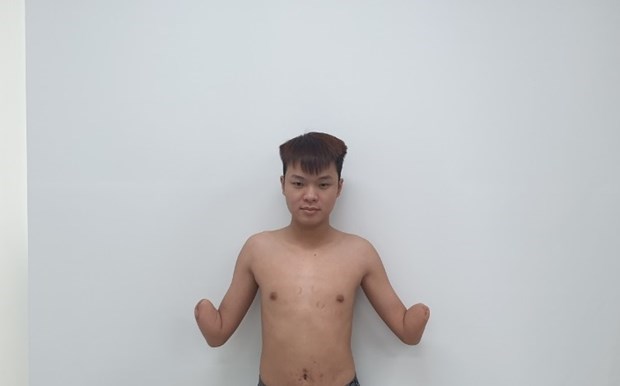 The young man before the surgery, with both his arms amputated (Photo: VietnamPlus)

More than 150 doctors, nurses, pharmacists and technicians join operations The organs, which were taken from a brain-dead donor , were transplanted to six patients on September 16. Military Central Hospital 108 . The hospital, in coordination with the National Coordinating Centre for Human Organ Transplantation , also carried out a heart transplant for a patient with end-stage dilated myocarditis at the Hanoi-based Vietnam-Germany Friendship Hospital. 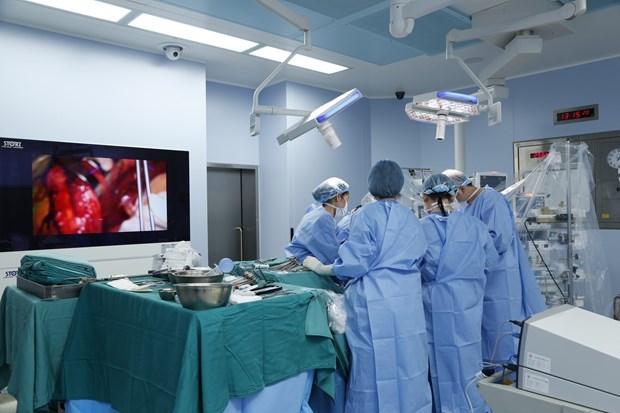 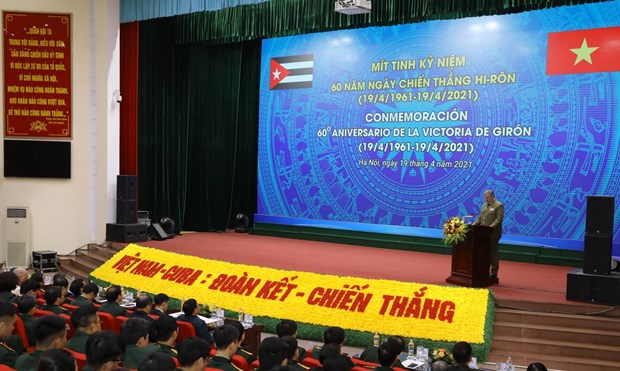 
Hanoi (VNA) – The 60th anniversary of Cuba’s Giron victory was celebrated with a ceremony in Hanoi on April 19 held by the Ministry of National Defence, the Vietnam Union of Friendship Organisations ( VUFO ), and the Vietnam-Cuba Friendship Association.

Addressing the ceremony, Deputy Minister of National Defence Sen. Lt. Gen. Nguyen Tan Cuong emphasised that the Giron victory on April 19, 1961 was a great source of support for national liberation and the struggle against imperialism in Latin America and Third World countries as a whole, helping to firmly safeguard the revolutionary administration and marking a decisive turning point in the Cuban revolution on the path towards socialism.

It was also a triumph of justice that has been increasingly affirmed via the achievements of the Cuban people over the last six decades of national construction and development, he said.

On this occasion, on behalf of the leaders of the Ministry of National Defence, Cuong offered his congratulations on the success of the eighth National Congress of the Communist Party of Cuba, held from April 16 to 19, and voiced his belief that under the leadership of its new Party Central Committee, Cuba will reap more achievements on the path towards socialism.

With regard to bilateral relations, the deputy minister noted that the fraternal solidarity and comprehensive cooperation between the Vietnamese and Cuban Parties, States, armies, and people have long been treasured and nurtured by generations of the two countries’ leaders, becoming a role model in relations in the era.

He thanked Cuba for standing side-by-side with Vietnam during its fight for national liberation as well as its ongoing national development and defence efforts, adding that the timely mutual assistance in fighting COVID-19 is also demonstration of their sentiment for and consistent trust in each other. 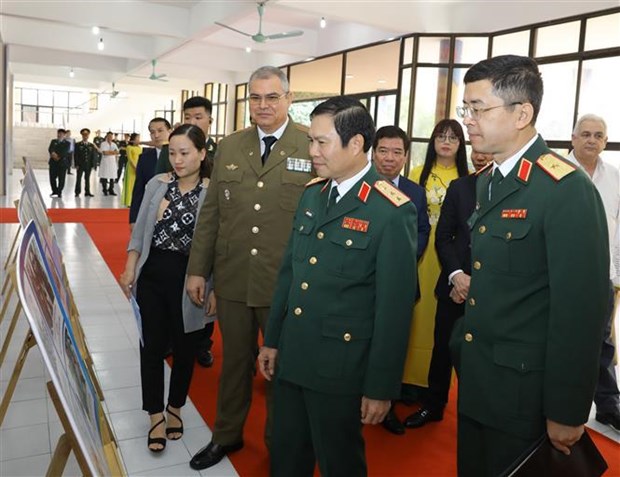 Delegates visit an exhibition at the event (Photo: VNA)

Appreciating the sincere sentiments the Vietnamese Party, State, army, and people have had towards his country over the last 60 years, Col. Juan Miguel Garcia Montano, Military Attaché of Cuba to Vietnam, affirmed that the two countries’ relations have overcome the test of war and numerous ups and downs in history, and promoting these ties is the first and foremost task in both sides’ foreign policies.

He also pledged to make further contributions to cooperation and friendship, including in defence, between the two countries./.