The Group of Seven nations on Sunday pledged to rapidly scale up technologies and policies that accelerate the transition away from unabated coal capacity, including ending new government support for coal power by the end of this year.

The countries, in a communique following their summit in Britain, confirmed pledges to increase climate finance contributions as part of efforts to reduce emissions that contribute to climate change and help a move toward cleaner energy, although climate groups said firm cash promises and other details were missing.

“We stress that international investments in unabated coal must stop now and we commit now to an end to new direct government support for unabated international thermal coal power generation by the end of 2021,” they said.

U.S. President Joe Biden, speaking after the summit, noted a commitment of up to $2 billion “to support developing countries as they transition away from unabated coal-fired power.”

The nations, in their statement, vowed to focus on other technologies, including carbon capture, to help speed up the transition away from coal.

“We will focus on accelerating progress on electrification and batteries, hydrogen, carbon capture, usage and storage, zero emission aviation and shipping, and for those countries that opt to use it, nuclear power,” the communique said.

Vietnam emerges as one of new PPE suppliers globally: IFC

HCMC – Vietnam has emerged as one of the new personal protective equipment (PPE) suppliers globally and its PPE manufacturing capacity surged six-fold last year, according to the International Finance Corporation (IFC), a member of the World Bank Group.

This ramped-up supply was initially driven by textile manufacturers shifting production in response to the health emergency during the Covid-19 pandemic and to mitigate losses caused by canceled orders for garments.

“Some textile manufacturers who started producing PPE products as an immediate response to the pandemic, are now considering the medium to longer-term business opportunity in this area,” said Vu Duc Giang, chairman of the Vietnam Textile and Apparel Association.

“However, local manufacturers have struggled with insufficient input materials, technical skills and sector knowledge and the disparity between local and international standards to access the global market,” he added.

In response, as part of the global PPE advisory program supported by the UK Government, IFC is working with local garment manufacturers through the Vietnam Textile and Apparel Association and national labs through the Directorate for Standards, Metrology and Quality of Vietnam, IFC announced on June 9.

The aim is to improve PPE producers’ operations and reduce costs by removing unnecessary burdens related to PPE standards and conformity assessments.

“The Covid-19 pandemic has tested the resilience of supply chains to the limit, especially in terms of medical supplies, including PPE. The UK believes that the diversification of PPE manufacturing will make the global supply chain more adaptable and prevent future disruption,” said Gareth Ward, British Ambassador to Vietnam.

“I am very pleased that Vietnam has been chosen as a priority country for this UK government-funded program. Vietnamese companies have a lot of potential to succeed globally with a skilled labor force,” he added.

Over the next 18 months, the program will support select manufacturers to scale quality PPE production, access the reliable supply of materials and equipment and achieve PPE international standards and certification to expand exports.

According to Kyle Kelhofer, IFC country manager for Vietnam, Cambodia, and Laos, access to cost-effective and quality PPE products is vital to the national Covid-19 response, helping to contain and manage the spread of the coronavirus.

“Promoting the production of PPE products in compliance with international standards not only helps increase Vietnam’s resilience to the pandemic, but also presents a business case as the PPE global supply chain is diversifying with opportunities for new manufacturers from emerging markets including Vietnam,” he said. 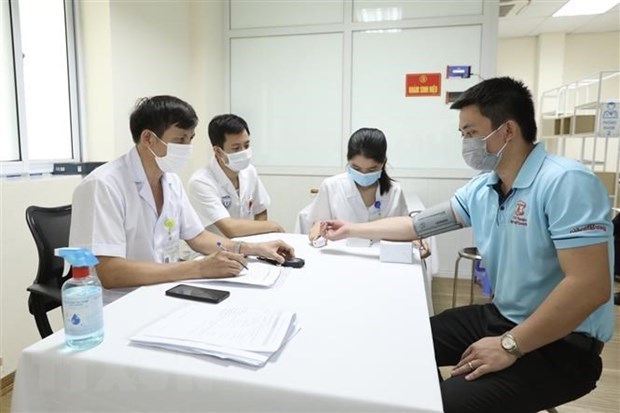 Health screening carried out for volunteers in the third phase of human trials of the homegrown Nano Covax COVID-19 vaccine at the Vietnam Military Medical University. VNA/VNS Photo

HÀ NỘI — There were 194 new COVID-19 cases detected in Việt Nam from Saturday evening to noon on Sunday, bringing the total number of positive patients to 10,435.

Four of the cases announced at noon on Sunday were imported and the rest local transmissions.

As many as 3,827 patients have been given the all-clear so far, while the death toll rose to 59.

A 76- year-old man living in Thuận Thành District, Bắc Ninh Province, was reported to have died of COVID-related complications. The patient died early morning on Sunday at the National Hospital for Tropical Diseases. He is the 59th person to die with COVID-19 in Việt Nam.

On May 8, the man was transferred to Thuận Thành District’s health centre suffering from pneumonia. He was moved into isolation at Gia Bình field hospital.

On May 21, he was transferred to Bắc Ninh Provincial General Hospital and tested positive for SARS-CoV-2 on May 23. The patient was transferred to the National Hospital for Tropical Diseases on June 3 with a diagnosis of septic shock, multi-organ failure, severe ARDS pneumonia caused by SARS-CoV-2, polyarthritis, and gastrointestinal bleeding due to duodenal ulcer.

Twenty provinces affected by the pandemic have now gone 14 days without any new infections. — VNS

The proposal for the approval of the 1/2,000 zoning plan for Rach Chiec National Sports Complex in An Phu ward, Thu Duc city on May 31 from Ho Chi Minh City Department of Planning and Architecture would be vital to saving this project, according to KP Singh, CEO of Vietnam Sports Platform (VSP), the investor of this project.

“Right after the 1/2,000 plan is approved, we will have the 1/500 plan approved and the project will be pushed forward. VPS is now also ready to contribute recommendations for the 1/500 plan of the velodrome. We are committed on processing this project even though it was delayed for years,” Singh told VIR .

Formed in November 2015, the $200 million project is invested by VSP, a joint venture between Japan Photo Promotion Co., Ltd. (30 per cent) and Korea Sports Promotion Organisation (70 per cent).

It is known that VSP is the only investor so far that has proposed a project at the Rach Chiec National Sports complex. Therefore, when officially approved, this project will be an essential factor in attracting other investors to participate in developing the complex.

After long consideration, in 2015, Ho Chi Minh City People’s Committee issued a document to permit VSP in principle to build the velodrome inside Rach Chiec National Sports Complex. The Committee had also assigned local authorities to conduct land clearance and compensation and procedures for this project.

In 2016, VSP was even ordered by the committee to push up its process for preparation to conduct this project. In March 2017, the Ho Chi Minh City Department of Planning and Architecture approved the project planning parameters.

However, soon after, Ho Chi Minh City Department of Planning and Investment (DPI) informed VSP that the selection of investors for this project must be chosen again via an open international bidding process. VSP, once more, had to submit dossiers for the bidding again.

Through the appraisal process, in 2018, the DPI submitted a report to Ho Chi Minh City People’s Committee, confirming that VSP is eligible to participate in the bidding based on its technical and financial capacity. Some other contractors did not meet the set criteria and had to withdraw from the bidding process.

“VSP was confirmed to qualify to participate in the bidding based on its technical and financial capabilities in 2018. Since then, however, there is no significant progress in the approval process. We do hope that when the 1/2,000 planning of the Rach Chiec complex is approved, we will receive the official approval from the city’s committee,” he said.

According to the plan, the velodrome is designed to accommodate over 6,000 seats and will be the first enclosed air-conditioned stadium on such a large scale in Vietnam. Various other Olympic standard sports such as boxing, wrestling, cue sports, fencing, judo, badminton, table tennis, and taekwondo can be conducted in this project.

Meanwhile, the Rach Chiec National Sports complex is expected to serve up to 100,000 people including athletes, spectators, staff, and other related subjects.

With the total investment capital of VND15 trillion ($652.17 million), this project will have 12 key components including a 50,000-seat stadium, a velodrome with motor racing and outdoor football field, a football academy, and many others.

According to Ho Chi Minh City DPI, the complex will be invested VND34 trillion ($1.5 billion), of this around VND8 trillion ($347.83 million) will be reserved for land clearance and compensation and infrastructure development.

Artist Bui Tien Tuan has debuted his nude paintings on silk which experts say are rare in Vietnamese fine arts.

The exhibition in HCM City entitled Nguyệt Sáng Gương Trong (The Mirror of The Moon) displays 58 silk paintings which Tuan painted in the last five years.

The artist drew nude women to explore all aspects and all possibilities of feminine charm.

“I don’t paint a specific female figure,” said Tuan. “I portray beauty. Silk material is soft and supple helping me to express my ideas.”

He features beauty in different postures and in different spaces such as in a bar, in the bedroom, floating on a water surface or drifting into the infinite vacuum of the universe.

The women in Tuan’s paintings are different from most previous depictions of women in silk paintings, according to fine art researcher Ha Vu Trong.

“Tuan’s women step out of his studio and go to the modern world which is a noisy and glittery urban area full of glamour and temptation.

“The exhibition goers can easily see the difference from Tuan’s paintings at the exhibition,” said critic Dang Than.

“Tuan has spent time to practice making his drawing style light as a leaf and silently drifting like a swan.”

Tuan, 50, was born in Hoi An, the central province of Quảag Nam and teaches at the HCM City University of Fine Arts.

He has had many solo and group exhibitions in the UK, France, and South Korea. He won a silver medal at the National Fine Arts Exhibition in 2010 and his paintings are in collections at Vietnam Fine Arts Museum, HCM City Fine Arts Museum and private collections.

He also released a painting book called The Mirror of The Moo at this exhibition. It is the first Vietnamese book with silk nude paintings. The bilingual book is written in English and Vietnamese with words by artist Tran Hau Tuan and other critics.

His first book was Hơi Thở Nhẹ (Light Breath) in 2010. The two books were distributed by Fine Arts Publishing House. 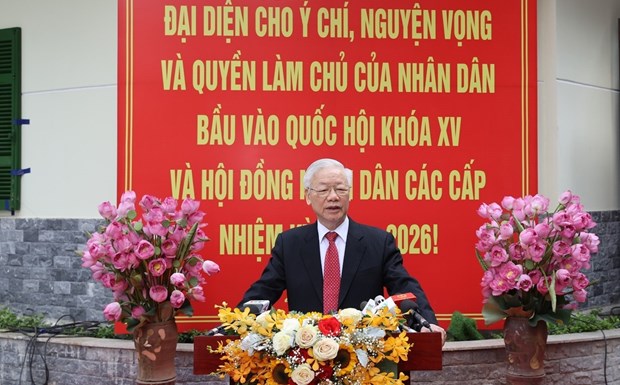 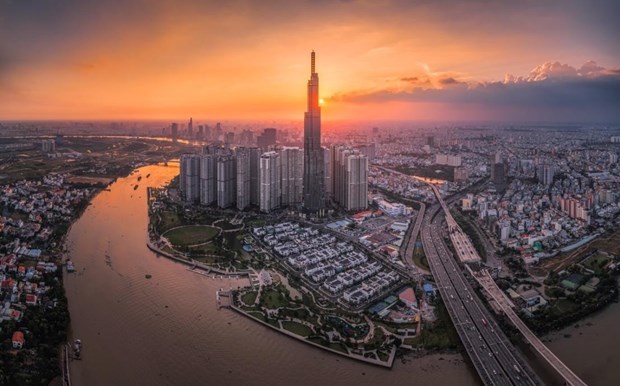