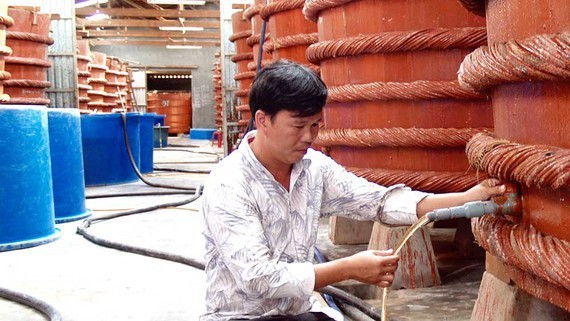 Phu Quoc fish sauce uses anchovy with high protein level as a key ingredient (Photo: SGGP)
Chairwoman of the Phu Quoc Fish Sauce Association Ho Kim Lien said Phu Quoc’s waters are home to a variety of seaweed and plankton that are major feed sources for anchovies – a key ingredient in its fish sauce.
The craft has existed in Phu Quoc for over 200 years ago. Local residents catch fresh anchovies and salt them before fermenting them in giant wooden barrels.
Fermenting them in wooden barrels is a feature of the traditional craft. The older the barrel is, the more durable it becomes and the better the quality of the fish sauce is.
The barrel has a wide mouth and is made from 55 planks of equal size: 2.2 metres long, 20cm wide, and 6cm thick. The diameter of the barrel mouth is about 3.2 metres and that of the bottom is some 2.6 metres. It is also strapped with green rattan.
Lien said the fish sauce is produced based on traditional methods, with the recipe being three parts anchovy and one salt, and the fermentation period lasts from 10 to 15 months. From the first to final layers, the fish sauce is divided into different types based on their protein levels. The final product has an amber colour and a slight aroma.
With support from the French Embassy in Hanoi in 1998, the Ministry of Fisheries along with Kien Giang province prepared an application for geographical indication. On June 1, 2001, Phu Quoc fish sauce was the first product in Vietnam to secure such status.
In July 2013, the EU granted the “Phu Quoc” origin certificate to the Vietnamese fish sauce.
A month later, the Ministry of Industry and Trade handed over the certificate to representatives of the Phu Quoc island district People’s Committee and the Phu Quoc Fish Sauce Association and it has now become an attractive local tourism product.
Phu Quoc city is now home to around 100 fish sauce makers, mostly in Duong Dong and An Thoi wards. Between now and 2025, it will strive to produce 12 million litres of fish sauce each year on average.
According to Lien, a major difficulty for the industry is that some consumers cannot identify genuine Phu Quoc traditional fish sauce, leading to unstable prices. There is currently no planning for a Phu Quoc fish sauce craft village, so it has not yet become a tourist destination.
The Phu Quoc Fish Sauce Association, founded in October 2000 and with 53 members, will pay attention to developing fish sauce quality to continue promoting its trademark, she said.
The craft is also expected to seek UNESCO world intangible cultural heritage status, contributing to improving its brand value and promoting the image of Phu Quoc island city.

A national cultural heritage photo contest and exhibition to raise awareness of heritage conservation within the local community.

The event was co-organized by the Russian Embassy in Vietnam, the Vietnamese Ministry of Culture, Sports and Tourism, and the Eurowindow Holding Corporation.

Speaking at the opening ceremony, the Russian Ambassador to Vietnam Vnukov Konstantin Vasilievich stressed that Vietnam and Russia are working together to promote a comprehensive strategic partnership between the two countries. The two sides have also strengthened cooperation in all fields and further expanded  activities in  culture, education, and people-to-people exchanges.

The ambassador affirmed that Russia has contributed to world artistic heritage in various fields such as literature, music and visual arts. The “Russian melodies” art performance offered an opportunity for Vietnamese to enjoy the Russian folk songs performed by famous singer Natalia Kirillova and the “Stradivalenki” quartet, he added.