Speaking at the meeting, Mr. Nen congratulated HCMC on carrying out extensive disease control methods and prevented the virus from spreading to other areas from Go Vap. 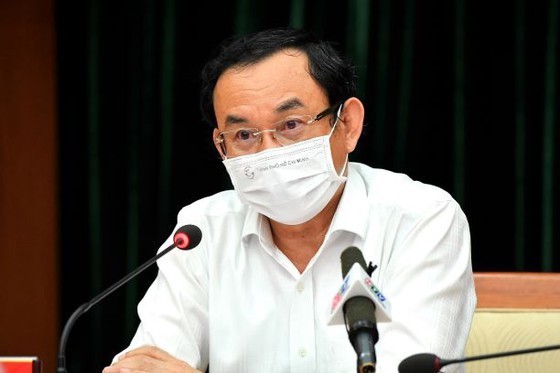 Mr. Nguyen Van Nen at the meeting. (Photo: SGGP)
He also thanked the city’s front line workers and police officers for their cooperation and efficient work. 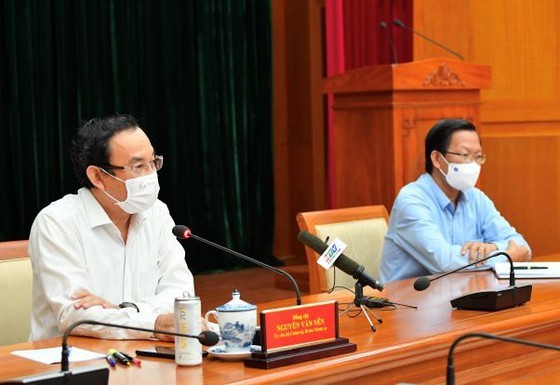 Mr. Nguyen Van Nen and Mr. Phan Van Mai at the meeting. (Photo: SGGP)
However, the fight continues as there is an increasing number of suspected carriers who had to be put into quarantine and the risk of the virus spreading undetected is still high.

Therefore, Mr. Nen proposed that the Standing Deputy Prime Minister and the leader of the HCMC Steering Committee for Covid-19 Prevention and Control consider the best solutions for the city and its people and businesses. The Secretary suggested extending the quarantine period to match the infection cycle of the new variant.

An extended quarantine period will help the city have enough time and resources to work on other important issues, and even more drastic measures can be applied in high-risk areas, he said.
At the meeting, Standing Deputy Secretary Phan Van Mai reiterated a number of key contents in Conclusion No. 07-KL/TW of the Politburo on June 11. 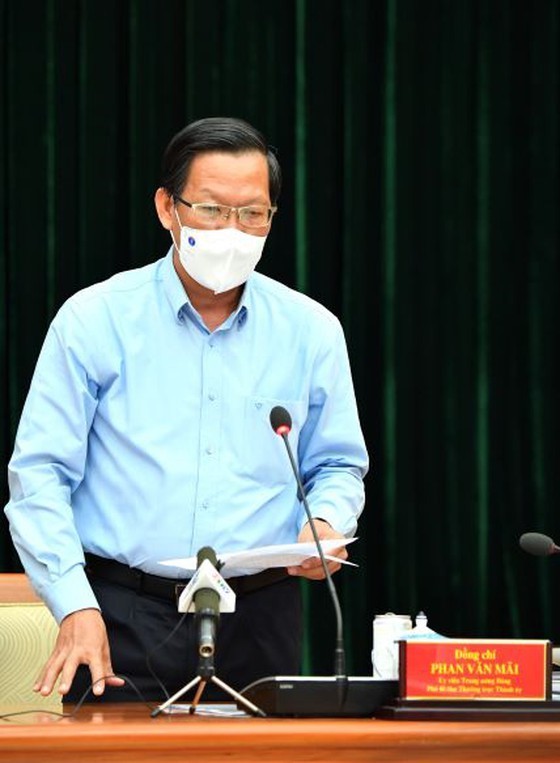 Mr. Phan Van Mai at the meeting. (Photo: SGGP)
Specifically, the Politburo requested municipals to remove administrative roadblocks and gather all resources for the “Covid-19 vaccine fund”, encourage qualified corporates and individuals to purchase and provide vaccines to the public, and develop a vaccination plan with specific roadmaps to achieve herd immunity as soon as possible.
It also suggested that relevant units continue to establish policies to promote the research and development of Covid-19 vaccines in the country, and launch a test use of vaccine passports among international visitors at tourist centers that can control the disease.
At the same time, local administrative bodies should promote and support the sales of produce especially in Covid-hit localities, implement disease control in livestock, and prevent price gouging. They should also come up with plans to teach and carry out relevant exams for rural students as well as to further give financial aid to local workers affected by the pandemic.

Currently, the Chairman of the Hanoi People’s Council is Mr. Nguyen Ngoc Tuan and the Vice Chair is Ms. Phung Thi Hong Ha.

The Hanoi People’s Committee will submit to the Hanoi People’s Council for approval a resolution on adjusting the decentralization of revenue sources, budget expenditures, and revenue distribution among state budgets of districts, towns and wards when piloting the urban government model, and a resolution on a number of specific spending mechanisms in Covid-19 prevention and control.

President Nguyen Xuan Phuc on Sunday sent a letter to US President Joe Biden, asking for COVID-19 vaccine support for Vietnam as the country is facing a devastating fourth wave of infections.

In the letter, the Vietnamese President thanked the US for having committed US$4 billion to the global COVID-19 vaccine sharing initiative COVAX and notified his counterpart that Vietnam has received two shipments of 2.5 million doses of AstraZeneca from the initiative so far.

“COVAX is truly a valuable and timely support that helps Vietnam and many developing countries in the fight against the pandemic amid the global vaccine shortage,” President Phuc wrote.

The Vietnamese President welcomed the US’ decision to send 80 million surplus vaccine doses to assist global efforts, especially as the COVID-19 situation in Southeast Asia and Vietnam is seeing complex developments.

President Phuc said he hoped the US would continue to support Vietnam and other countries in vaccine supplies, and proposed the two sides step up co-operation in research, production and technology transfer for COVID-19 vaccines.

The Vietnamese President said Vietnam always attaches great importance to the comprehensive partnership with the US and believes that in the spirit of friendship, the two sides will continue to foster bilateral ties and bring further benefits to the peoples of the two nations.

Previously, in talks with leaders of many countries including Russia, China, and Japan, Vietnamese leaders have requested they provide support for Vietnam to access COVID-19 vaccines and strengthen ties in researching, producing, and transferring technology for COVID-19 vaccine production.

Vietnam is undergoing a serious COVID-19 outbreak, with more than 4,000 infections since April 27.

Other than 2.5 million doses from COVAX, Vietnam with a population of 97 million has to date received only 400,000 doses from the order of 30 million it has secured with AstraZeneca.

More than 1 million jabs have been administered, and some 28,000 people have been given the full two doses. 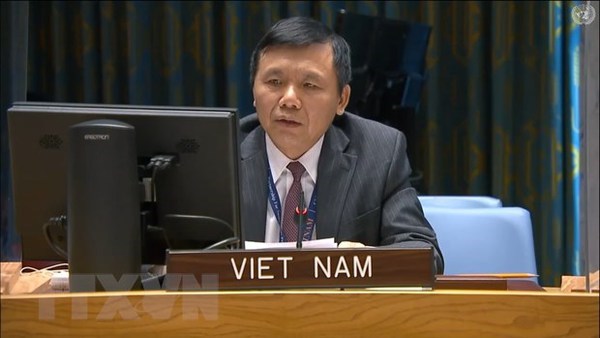 Speaking at the meeting, Wane said that Assimi Goïta was sworn in as President of Mali and appointed the transitional Prime Minister on June 7, and pledged to continue the transitional roadmap, including the election slated for February 2022.

The African Union (AU) and the Economic Community of West African States (ECOWAS) decided the suspension of Mali’s membership from both organisations, he said, stressing that the security situation in Mali still remains complicated with increased community conflicts, especially in central and northern Mali.

The UN Multidimensional Integrated Stabilization Mission in Mali (MINUSMA) is working hard to complete its mission in Mali and support the G5 Sahel joint force amid difficulties in resources, he noted.

Wane called on the UN Security Council to continue supporting Mali in conducting successful transition to overcome the crisis.

Member of the council condemned coup in Mali and the arrest of leaders of the former government, calling on the transitional government to ensure the implementation of the transition process, including the credible, inclusive and transparent elections in February 2022.

They opposed attacks targeting civilians and peacekeepers of MINUSMA, and supported the role of the AU and ECOWAS in supervising the transition in Mali and assessing UN efforts in supporting Mali in implementing the transition, maintaining peace and security and promoting development.

Addressing the event, Ambassador Dang Dinh Quy , Permanent Representative of Vietnam to the UN, expressed concern over the deteriorating security situation in Mali, holding that the coup has caused risks to the transitional process, leading to instability and difficulties to the implementation of the 2015 peace agreement.

He called on all stakeholders to increase efforts in national conciliation, restrain, and settle differences through dialogues and consultations.

Vietnam supports the role of regional organisations, especially the ECOWAS and AU, in assisting the transition in Mali, and welcomes the MINUSMA’s efforts amid challenges and difficulties, Quy said.

The Vietnamese diplomat also called on the international community to continue supporting people in Mali, including the settlement of humanitarian challenges./.

From early morning, thousands of Da Nang residents went to the beaches after a ban that had been imposed to prevent the spread of Covid-19 was lifted.

From 0:00 on June 9, the authorities of Da Nang allow restaurants, shops, and catering businesses to open and serve customers, and permitted swimming again.

According to regulations, bathing activities are permitted from 4:30 to 7:30 in the morning and 4:30 to 6:30 in the afternoon. People are banned from gathering to have fun, play sports, eat, drink, and sell food on the beach.

Right after the ban was removed, Da Nang residents went to the beach early on the morning of June 9 to swim. Despite a drizzling rain, many people flocked to Pham Van Dong and My Khe beaches to swim and walk.

The local authorities assigned employees at beaches to remind people to keep a safe distance, not to gather in crowds, and to wear masks. At Pham Van Dong beach (Son Tra district), people are required to fill out medical declarations, and disinfect their hands before swimming.

Mr. Nguyen Van Anh, a resident in Hai Chau district, said that people were happy to be allowed to go swimming again after being banned for a long time.