In May 1945, Lieutenant Dan Phelan parachuted into Tan Trao base camp and joined Viet Minh forces to prepare all work, including the construction of a small field runway to receive Allied aircraft. After that, on July 16, 1945, the Deer Team organised the first parachute jump to Kim Lung Village, within the Tan Trao war zone (Tuyen Quang Province). The team’s leader, Major Allison Thomas, joined the first mission along with Sergeant William Zielski and Sergeant Henry Prunier. On July 30, 1945, the second parachute completed the whole Deer Team personnel, with Lieutenant Rene Defourneux, Sergeants Lawrence Vogt and Aaron Squires, and first class Private Paul Hoagland in charge of a medic.

Uncle Ho instructed his forces to select staff in the Liberation Army to form with the Deer Team mission a company called “Vietnam-US joint military” unit. The unit was led by Dam Quang Trung, the commander of an army of about 200 men. Major Thomas was considered the Company Chief of Staff. During their stay at Tan Trao battlefield, the Deer Team members focused on training the Vietnamese – American company to use weapons and guerrilla tactics. At the same time, three Dakota C-47 transport planes dropped some weapons.

Up until now, the volumes and types of weapons and equipment provided by the US to the joint company and the Viet Minh resistance forces have not been counted exactly. However, based on the number of weapons that the Vietnam-US company used in the battle to liberate Thai Nguyen on August 20, 1945, there were a machine gun, two 60 mm mortars, four Bazooka anti-tank rocket launchers and eight Brno rifles, 20 Thompson submachine guns, 60 carbines, 20 Colt revolvers, some binoculars and weapons brought in by road with Frankie Tan and Mac Shin (the first two Allied agents accompanying Uncle Ho to the Tan Trao war zone, in which Mac Shin provided the forces with 45 Thomson submachine guns, 30 carbines and 45 automatic pistols). To surmise, the numbers of American weapons supplied to the Viet Minh were probably about, or a little more than, those listed above.

At 14:00 on August 16, 1945, the Liberation Army came from Tan Trao to attack the Japanese in Thai Nguyen Town. The Vietnamese-American company and the Deer Team also participated in this battle. The Vietnam-US company was tasked with besieging and destroying the most difficult target, that was the Japanese barrack in the town. On August 20, 1945, the Japanese army in the station still resisted, forcing the Liberation Army Command sent an ultimatum to the major who was the commander of the Japanese troops there to call for surrender. In order to increase the prestige of the Vietnamese Liberation Army and the Allies forces in that combat, there was an ultimatum in English signed by Major Thomas, sending to the Japanese troops to call for surrender. These two ultimatums were archived at the Vietnam Institute for Military History.

At the Department of Japanese Gendarmerie (stationed at Gauchie House), the Japanese troops leaned on solid fences and stubbornly resisted. The Vietnamese army sent a Bazooka gun team led by Squad leader Sung Hai to burst a wall of the house. The revolution troops used pistols and grenades to destroy the enemy and capture the target. The Liberation Army commanders, including Vo Nguyen Giap and Dam Quang Trung, accompanied by Major Thomas, went to the field to inspect the location captured from the Japanese troops. After that, the Deer Team and the newly formed Fourth Liberation Army Unit marched to Hanoi. On September 9, 1945, Major Thomas and the Deer Team members completed their missions in Hanoi and were ordered to return home.

The presence of the Deer Team in Vietnam was short-lived, about 80 days. In October 1995, after half a decade, they had the opportunity to return to Vietnam at the invitation and arrangement of the Vietnam – US Society, at a time when the two countries had officially normalised diplomatic relations. For members of the Deer Team and intelligence officers like Frankie Tan and Mac Shin, it was a one-time return to Vietnam, because after that, none of them had the chance to come back again.

The days they visited Vietnam were filled with memories of “a time far away”. The Deer Team members showed Vietnamese friends their old souvenirs they still cherished to remember their days at Tan Trao battlefield. Henry Prunier wore the suit sewed in Hanoi before he was ordered to return to his home country, which he kept carefully for many years. At a party held in Hanoi to welcome the delegation, General Vo Nguyen Giap attended. Upon seeing and recognising Henry Prunier, the General took an orange on the plate and made a swinging motion like throwing a grenade so that Henry Prunier could see that the General had not forgotten his military adviser after so many years.

During the visit to Tan Trao war zone, the members of the Deer Team returned to where they lived in the past. When arriving at Tan Trao Banyan, Major Thomas recounted the original plan that the team would travel by road, but because the Japanese troops were scouring so hard, they had to use air route. Due to the bad weather, the pilot could not recognise the signs of the parachute landing on the ground, so the team had to jump with “closed eyes” and Major Thomas’s parachute was caught in Tan Trao Banyan. Afterwards, the Deer Team was given a meal of beef, and when he recalled that memory, Major Thomas laughed and praised “the beef that day was delicious”.

When visiting the town of Thai Nguyen (now Thai Nguyen City, the capital of Thai Nguyen Province) to recall the battle to liberate the town with the Vietnamese-American company, Major Thomas showed a photo of a house. He said the house was home to the liberation army command headquarters during the battle and said he wanted to revisit the house. A quick search was organised, and eventually the organisers found a local senior teacher. He recognised the gate of the house in the picture and took everyone there. It is now the office of Thai Nguyen Power Company but, fortunately, the gate from the French colonial era still exists. Major Thomas said at that time, despite receiving the radio order not to participate in battles against the Japanese with the Viet Minh forces, he decided not to comply with this order.

Looking back at the memories of members of the Deer Team, the initial military advisers of the Vietnamese revolutionary armed forces during their pre-uprising days, as well as their return to Vietnam after 50 years, is to be able to see the mutual understanding between the Vietnamese people and people in other countries, including the Americans. Such relations need to be promoted and cherished so that the two nations can work together towards a common peace and prosperity in the world.

The Ivorians won 3-0 away in Niger with captain Serge Aurier playing a central role with an early goal and two assists in the win. A goalless draw away in neighbouring Mauritania meant Morocco finished top of Group E. Congo kept up second place in Group I when they held already-qualified Senegal to a goalless draw in Brazzaville.

* France were highly fancied to claim their first Six Nations title since 2010 before the championship started yet they ended it physically and mentally drained following a 27-23 loss to Scotland on Friday. Les Bleus, who have been playing some exciting rugby since Fabien Galthie took over last year, lost the plot in the dying minutes which allowed Scotland to record their first win in Paris since 1999.

* Anna Shcherbakova led a Russian sweep of the women’s singles medals at the figure skating world championships on Friday. The 16-year-old, who celebrates her 17th birthday on Sunday, secured her first world title with a 233.17 score after leading Wednesday’s short programme with a personal best of 81.00 points.

* Greece’s Acropolis Rally will return after an eight year absence to replace Chile on the world championship calendar in September, organisers said on Friday. Chile’s round has been cancelled as a result of travel and governmental restrictions triggered by the COVID-19 pandemic.

* McLaren’s Lando Norris was second fastest in second practice for Formula One’s season-opening Bahrain Grand Prix on Friday and almost as quick in playing down his team’s prospects. Red Bull’s Max Verstappen was fastest in both sessions while Mercedes’ seven-times world champion Lewis Hamilton ended the evening third on the timesheets.

* Japan’s government will begin talks soon on potentially halving the number of official travellers to the country for this year’s Olympics to around 30,000 amid the COVID-19 pandemic, Kyodo news agency reported on Friday.

* Aleksandar Mitrovic will head into Saturday’s World Cup qualifier against Portugal determined to become his country’s all-time top scorer as they look to secure a first competitive win over the European champions. Mitrovic, who has endured a goal drought at his Premier League club Fulham, came off the bench to score twice in Serbia’s comeback 3-2 win over Ireland on Wednesday in their opening Group A match.

* Daniel van Tonder won his first European Tour title with a nail-biting playoff victory over Jazz Janewattananond at the Savannah Classic on Friday as overnight leader Justin Harding failed to clinch his second title in a week in Nairobi. Van Tonder carded 64 in the final round with a monster birdie putt from the edge of the 18th green to finish at 21-under overall while Thailand’s Jazz missed his birdie putt to finish level with the South African.

* Italy will host the opening game of the European Championship as planned with a crowd in the stadium, according to the president of the Italian Football Federation Gabriele Gravina. The tournament, which was postponed last year due to the novel coronavirus pandemic, is set to kick off at Rome’s Stadio Olimpico on June 11 when Italy host Turkey.

* Everton’s planning application for a 52,888-capacity stadium at Bramley-Moore Dock in the north of Liverpool has been approved by the government, the Premier League club said on Friday. The Merseyside club have played at Goodison Park since 1892, but with a capacity of only 40,000 the team has struggled to compete with the match-day income of their rivals.

* Belgium must do without seven squad members for their trip to Prague to play the Czech Republic on Saturday in World Cup qualification. The team’s five Bundesliga-based players will not travel for the Group E game because of quarantine restrictions on German residents travelling to the Czech Republic and the squad have been further hampered by injuries to Yannick Carrasco and Thomas Vermaelen, coach Roberto Martinez said on Friday.

* Coach Stephane Moulin said on Friday that he will leave Ligue 1 side Angers at the end of the season after 10 years in charge. Under Moulin, the longest serving coach at any club in Europe’s top five leagues, Angers won promotion from Ligue 2 in 2015 and reached the French Cup final in 2017.

* The 2023 Tour de France will set off from Bilbao, marking the sixth time in 10 editions that the world’s most famous cycling race starts outside France, its organisers said on Friday. The opening two stages will be held in the Basque country, where the Tour also began in 1992, when it rolled out from San Sebastian.

* The BORA-hansgrohe cycling team was excluded from the Belgian E3 Saxo Bank Classic on Friday after one of its riders returned a positive COVID-19 test. In a statement the German team said that British rider Matthew Walls had tested positive.

* Veteran Chris Thompson, who turns 40 next month, produced a masterful and highly emotional performance to win the British Olympic Marathon trials in the unusual surroundings of London’s Kew Gardens on Friday to secure his place in Tokyo.

* Referee chiefs are working on an action plan to improve the Video Assistant Referee (VAR) in the Premier League and any changes to the system will be passed on to match officials ahead of the new season, the Times reported on Friday. 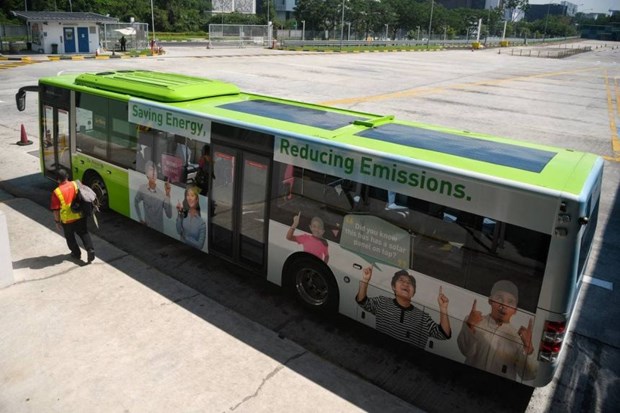 The panels are expected to help Go-Ahead Singapore save 1,400 litres of diesel per bus per year. (Photo: straitstimes.com)