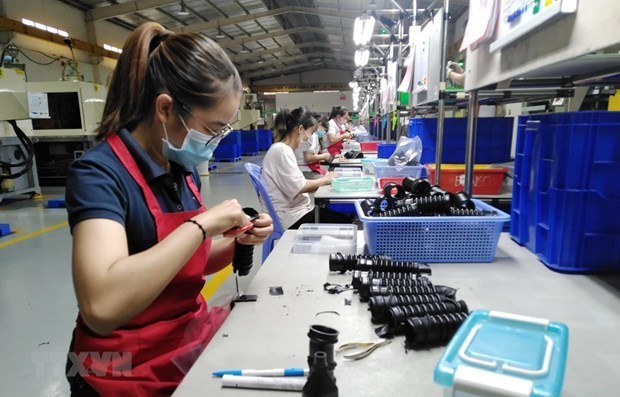 Foreign investors adding capital and expanding production is a positive sign and shows that they have confidence in the local business climate and are posting good earnings, deputy head of the provincial industrial park (IP) authority Le Van Danh said.

Most projects are in supporting industries and use advanced technology, he added. 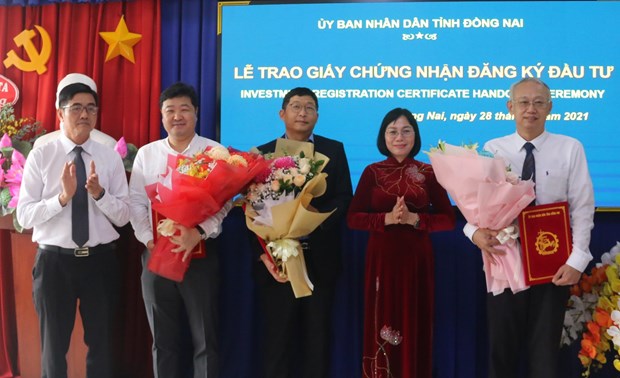 She added that the province gives priority to projects applying high technology and employing skilled workers in supporting industries and is now more selective when it comes small-scale, labour-intensive, and environmentally-unfriendly projects.

According to data from the provincial IP authority, local IPs had attracted close to 670 million USD in 58 FDI projects since the beginning of this year. They include 39 projects receiving additional investment, worth more than 420 million USD.

Dong Nai is currently home to 32 IPs. Nearly 1,400 FDI projects worth a total of 27 billion USD have so far set up camp in the province./.

Meanwhile, 403 million USD was added to 30 existing projects and another 377.6 million USD was used for capital contribution and share purchases in a total 547 transactions.

Among 55 countries and territories investing in the city in the period, Japan took the lead with 494.4 million USD, Singapore came second with 281.6 million USD, and the Republic of Korea was third with 97.7 million USD.

Hua Quoc Hung, head of the management board of industrial and export processing zones of HCM City , said the southern hub’s processing and industrial zones had lured 237 million USD as of late April, surging 26 percent against the same period last year.

The municipal People’s Committee has devised a plan to meet with FDI businesses in an effort to improve investment climate and support the firms, as well as introduce major projects and the city’s investment orientations for the 2021-25./.

Vietnam posted a trade surplus of nearly 1.9 billion USD in the first four months of the year. (Photo: VNA)

Hanoi (VNA) – Vietnam posted a trade surplus of nearly 1.9 billion USD in the first four months of the year, according to the Ministry of Planning and Investment’s Foreign Investment Agency .

Minister of Planning and Investment Nguyen Chi Dung said that the ministry will work to complete mechanisms with a view to improving business climate for foreign investors, and set up preferential mechanisms to attract investment into the fields of high technologies and source technologies./. 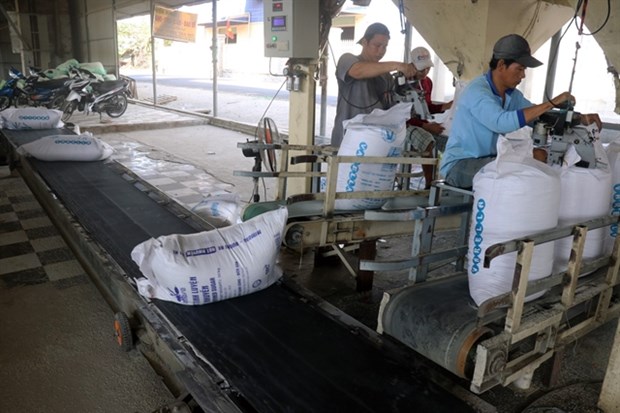 Hanoi (VNS/VNA) – The country’s export turnover increased 22 percent to reach 77.34 billion USD in the first quarter, while the trade surplus was estimated at 2.03 billion USD.

The General Statistics Office (GSO)’s representative said on March 29 that: “Vietnam has recorded a strong recovery of import and export activities.”

GSO said the production expectation in Q2 was more positive with an increase of 27.5 percent in registered capital at 447.8 trillion VND (19.46 billion USD) in Q1. A survey on business trends of enterprises in the manufacturing and processing industries showed enterprises expect their production and business in Q2 to be better than Q1.

In the first quarter, international visitors were estimated at 48,100 arrivals, down 98.7 percent from the same period last year. In March, there are 19,400 arrivals, up 77.3 percent over February and down 95.7 percent from last March, said the GSO.

The office also considered positive signals in mobilising and using capital, saying realised investment capital was estimated at 507.6 trillion VND in Q1, an increase of 6.3 percent over the same period last year. The office said the increase was an important driving force for the mobilisation and use of social investment capital to grow strongly in the coming quarters of the year./. 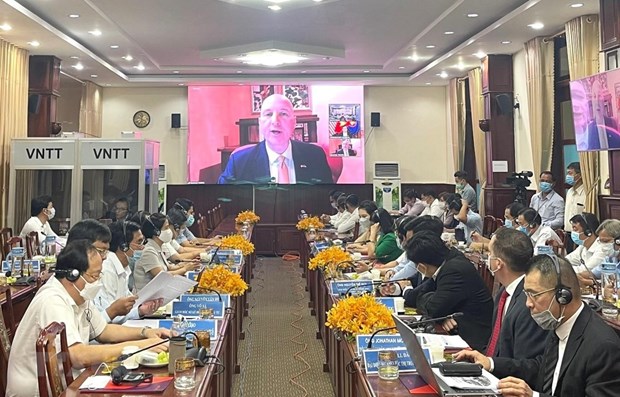 At the conference (Photo: VNA)

Binh Phuoc (VNA) – The Becamex IDC Corporation together with the People’s Committee of southern Binh Phuoc province held an online conference on May 5 with investors from the US.

The conference, therefore, holds significant and practical meaning for Binh Phuoc and the US business community and affirms the province’s determination to expand cooperation and attract investment and the attention from US firms.

Binh Phuoc hopes to bolster cooperation with US investors in the fields of ind us trial engineering, electromechanics, the agricultural processing industry, supporting industries, and high-tech agriculture, among others, he said.

He also pledged that Binh Phuoc will improve its investment climate to ensure transparency, revise policies, and create favourable conditions for businesses operating in the province.

At the conference, Vietnamese Ambassador to the US Ha Kim Ngoc underlined that the US is among Vietnam’s leading trade partners, with bilateral economic and trade cooperation maintaining growth levels despite the adverse impact of COVID-19.

Binh Phuoc is currently home to 13 industrial parks (IPs) covering 4,686 ha. To satisfy economic development demand and attract investment in the 2021-2030 period, the province eyes the expansion of three IPs and the establishment of four others, raising the total area to 10,000 ha.

Prominent among these will be the Becamex – Binh Phuoc Industrial and Urban Complex in Chon Thanh district, which has drawn 49 projects with registered capital of nearly 1 billion USD.

Becamex Binh Phuoc is set to build the 1,000-ha Dong Phu Urban IP in the time to come./. 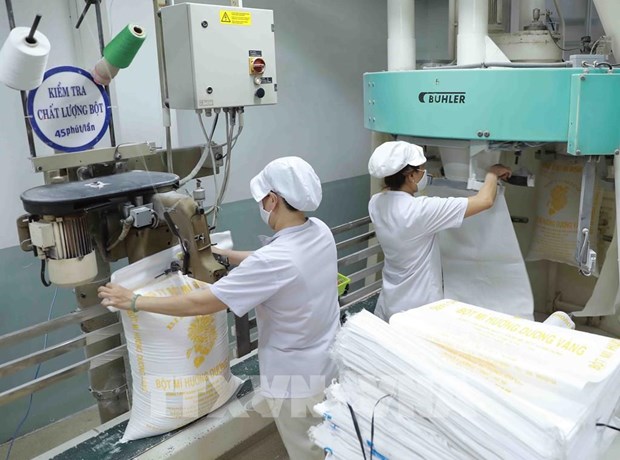 HCM City (VNA) – An online conference was held in Ho Chi Minh City on May 5 to seek measures and strategies to effectively approach and exploit the promising but choosy European market.

Tran Thi Trang, head of the Training Office of the HCM City Center for Trade Promotion and Investment (ITPC) said that Europe is one of the largest trade partners of Vietnam, while Vietnam is the second biggest trade partner of Europe in Southeast Asia.

Despite impacts from the COVID-19 pandemic , trade exchange between the two sides has still been maintained, especially since the EU-Vietnam Free Trade Agreement (EVFTA) took effect, import-export activities have been on the rise and forecast to continue to grow in the future, she said.

Meanwhile, Zachaier, director for supply chain at Source of Asia (SOA), said that Europe is a potential market that is the target of many countries. Vietnam is the one of the important trade partners of Europe with outstanding advantages thanks to the EVFTA. By the end of 2020, four months after the deal took effect, Vietnam’s exports to the EU saw positive signs despite impacts from COVID-19.

Vietnam’s exports to Europe reached 42 billion USD, he noted, adding that the figure has accounted for only 2 percent of the total import value of the EU, showing that there is large room for Vietnamese goods to penetrate into the market.

He said that European consumers are paying greater attention to sustainability, including the origin trace, social responsibility and environmental protection.

In that context, Vietnamese exporters should assess the sustainability of their products and the regulations in the market, thus designing strategies to adjust the supply chain to suit international standards and rules, he suggested.

He said that Vietnamese businesses should focus on building standardised factories, while controlling the supply chain in an effective manner to meet the demands of the European market .

Do Van Huy, Manager of the Shire Oak International project in Vietnam, said that European consumers care a lot about the environment and climate change, and prioritise products produced with green energy.

Dinh Thi Tuyet Nhung, SOA’s international market development team leader, held that the similarity of successful enterprises such as Vinamilk, Viettel and Kova is focusing on their product quality right from the stage of developing the domestic market. Once winning the home market, they started studying and approaching foreign markets, she said./.