A startup in the $0–5 million funding stage pays its CEO $2,000 a month in Indonesia and $4,000 in Singapore, according to a recent report by Southeast Asia-focused venture capital firm Monk’s Hill Ventures and Asia-Pacific jobs site Glints.

But vice presidents engineering in Vietnam startups in the Series B stage earn up to $10,000 a month, same as in Singapore, while the monthly remuneration in Indonesia is $7,100.

Due to an oversupply of fresh graduate junior engineers in markets such as Indonesia and Vietnam, starting salaries can be low; however, they quickly grow with a few years of experience to the $700–1,200 range.

Engineers in Vietnam typically earn higher salaries than those in Indonesia but lower than their Singapore peers, the report says.

The article highlighted President Phuc’s efforts to direct the national economy as it strives toward rapid development, whilst also effectively responding to the COVID-19 pandemic, efforts which have earned plaudits both at home and abroad.

The author of the article also quoted political expert Nguyen Khac Giang of Victoria Wellington University in New Zealand as saying that President Phuc’s experience in maintaining relations with the United States under the administration of Donald Trump will serve him in good stead as he conducts foreign affairs in his role as State Vice President.

Economic outlet Warta Ekonomi said that under the leadership of the former Prime Minister, Vietnamese GDP increased by 1.4 times compared to 2015. In terms of the global competitiveness index, the nation moved up 10 places to 67th out of 141 countries, according to the World Economic Forum.

The new PM spoke of the importance of Government in boosting national construction and development, whilst also maintaining independence, sovereignty, unity, and territorial integrity, the article said.

He also underscored the need to devise an action plan aimed at implementing the resolutions adopted at the 13th National Party Congress.

Most notably, the rice export volume to Thailand skyrocketed by 30 times to 16,250 tonnes from last year’s corresponding period.

The first half of March witnessed rice export orders to the Philippines bounce back, with the nation purchasing 53,620 tonnes of Vietnamese rice worth US$28.84 million, up 53.8% in volume and 51% in value. The Filipino market accounts for 25% of the total Vietnamese rice export volume.

However, statistics show as of April 6, the export price of local 5% broken rice plummeted by US$5 – 10 to below US$500 per tonne, following the downward trend in rice prices globally. Thailand and India lowered their rice prices for export due to the depreciation of their Baht and Rupee currencies against the US dollar.

Pakistan, one of the world’s rice exporters, also offered its 5% broken rice at US$418-422 per tonne, a fall of US$20 compared to the previous week.

This plunge can largely be attributed to the Indonesian Government’s decision not to import rice until at least June 2021, despite agreements already reached with both Thailand and Vietnam, according to the Ministry of Agriculture and Rural Development.

Indonesian farmers have put mounting pressure on their Government to not import rice during the ongoing harvest which is anticipated to generate high yields.

MSMEs have contributed 61.1 percent to the national economic growth and absorbed 97 percent of the total workforce, or some 116.9 million workers, Hartarto noted in a statement.

The minister stated that some MSMEs fell into grave problems owing to the COVID-19 pandemic.

A survey involving 195,099 MSME conducted by the Cooperative, Small and Medium-Scale Enterprises Ministry found that 23.10 percent of the MSME had experienced a decline in their business turnover, 19.5 percent encountered obstacles in distribution, and 19.45 percent faced problems in working capital.

An Asian Development Bank (ADB) survey encountered a similar condition, wherein 30.5 percent of the MSME in Indonesia had recorded a decline in domestic demand and 48.6 percent were temporarily closed.

One of the government’s moves to revive MSME’s economic activity is by providing stimulus in working capital through the micro loans scheme with low interest rate and without additional collateral, he revealed.

In 2020, the government had waived off interest payments and deferred principal installments of KUR for MSMEs affected by the COVID-19 outbreak for a maximum of six months.

In 2021, the government has extended the provision of interest subsidy of three percent, postponement of principal installments and relaxation of KUR provisions by extending its term as well as an increase in the ceiling to 253 trillion Rp.

The government will need the help of all stakeholders, including the public and MSME operators, to ensure that all government policies have been implemented properly. Thus, the MSME could strengthen their businesses and boost the national economy, Hartarto added. 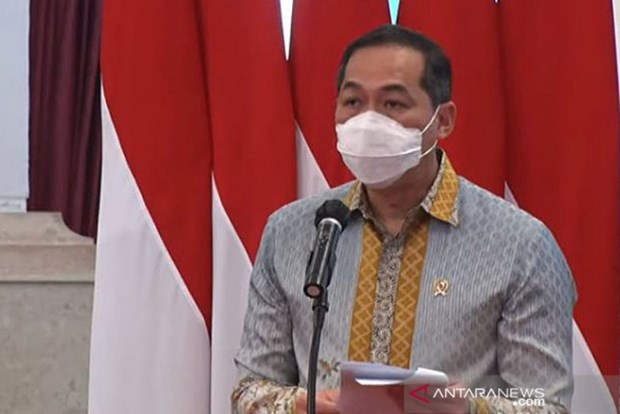 Jakarta (VNA) – Indonesia’s export s are expected to grow by 4 percent this year to support the government’s economic growth target of 5-5.5 percent, according to Indonesian Minister of Trade Muhammad Lutfi.

Lutfi said global agencies, such as the International Monetary Fund (IMF) and the Organization for Economic Co-Operation and Development (OECD), have made corrections to their projections for the world economy and stated that the numbers will improve.

Indonesia is aiming for 5-5.5 percent economic growth this year. To achieve the economic growth target, exports must grow by 4 percent, while import growth cannot be more than 2 percent, household consumption must increase by 5 percent, and investment needs to grow by 13.7 percent, he said.

Although the increase in exports must reach 4 percent, the Trade Ministry is designing a strategy so that exports can grow by 6.3 percent, he added.

The Trade Minister’s optimism is supported by the trend of commodity supercycles, or commodities whose prices have risen rapidly compared to previous years, such as crude oil, LNG, rice, iron ore, and copper.

Some of the world’s major commodity prices recorded a very significant record increase in 2020, which triggered speculation of a commodity supercycle in 2020- 2021 due to economic stimulus in developed countries, the weakening dollar exchange rate, and a drastic increase in demand in China and industrialised countries in Asia, he said.

Exports have made huge contributions to Indonesia’s GDP, helping the nation recover its economy./.

The Foreign Direct Investment (FDI) capital flows over the recent five months of 2020 only decreases compared to the same period last year but rises against the same period of the previous years.

The COVID-19 pandemic has seriously affected foreign investment inflows that witnessed a year-on-year decrease of 17% to US$13.88 billion in the first five months this year, according to the Foreign Investment Agency, under the Ministry of Planning and Investment.

Of the figure, the newly-registered capital and additional capital hit US$7.44 billion and US$3.45 billion, respectively while the capital contribution and share purchase of foreign investors stood at US$3 billion.

The FDI decline in the reviewed period is attributed to the shrinkage in capital contribution and share purchase of foreign investors (US$3 billion in 2020 and US$7.65 billion in 2019).

Meanwhile, the newly-registered and additional volume of US$7.44 billion and US$3.45 billion, respectively, are still higher than the figures recorded last year (US$6.46 billion and US$2.63 billion).

Remarkably, Bac Lieu LNG-fired thermal power plant capitalized at US$4 billion is the biggest FDI project in the Mekong Delta region in the first five months.

With Apple moving parts of its popular AirPods wireless earphones production chain into Viet Nam for the first time this quarter and many U.S. firms actively seeking for opportunities in Viet Nam are among positive signals indicating that the nation has emerged as a spotlight in welcoming the transition of investment in the next period.

Viet Nam’s priorities are stable costs, exchange rates and institutions, according to the SSI Securities Corporation, adding that foreign projects set up in industrial parks in the country were up 32% year-on-year in the first four months of the year to US$9.8 billion.

Many large U.S., Japanese and European companies are gearing up to shift production to Viet Nam among other ASEAN peers like Indonesia, Thailand and Malaysia.

The nation also offers support to businesses, with many incentives for large FDI projects, and has joined a network of free trade agreements in which Indonesia is not a signatory. Recently, the Vietnamese dong has been very stable compared to the Indonesian rupiah.

At the meeting between the Government and businesses on May 9, Prime Minister Nguyen Xuan Phuc clarified five key measures to recover the economy including attracting investment from domestic economic sectors, boosting up exports, enhancing public investment, promoting domestic consumption and attracting FDI.

During the a meeting on May 22, PM Phuc stressed the need to deliberate on concrete measures to optimize the investment flows shifted to Viet Nam, especially from major multinational groups and high-tech firms.

The Government leader ordered a plan to address bottlenecks against investors, with focus laid on such matters like land clearance and human resources.

The Government has made it clear on several occasions that it gives priority to luring high-tech and high added-value projects and urged authorities to take concrete actions to facilitate operations of all economic sectors, particularly the private one.

The COVID-19 pandemic is causing consequences, however, it is expected to bring golden opportunity for the nation to make breakthrough in FDI attraction, he added. VGP