The acquisition follows the establishment of LOGOS Vietnam Logistics Venture last month, which has an initial forecast portfolio of approximately $350 million by gross asset value.

Glenn Hughes, head of Vietnam, said that the company is pleased to have acquired its first development site, having spent the last two years assessing the local market .

He believed the property is well suited to service the growing demand from international and local logistics operators within the greater Hanoi region and is confident that the company can set a new benchmark for the Vietnamese logistics market in terms of high-quality logistics buildings to meet this demand.

Located in VSIP in Bac Ninh province, the site offers immediate access to National Highway 1A and surrounding transport networks, and is 35 minutes from the Hanoi Central Business District and Nopi Bai International Airport, and 1.5 hours from Haiphong seaport.

The site is considered one of the key logistics locations in Hanoi and is strategically positioned for LOGOS’ customers.

Subject to relevant planning approvals, LOGOS proposes to develop the site on both a speculative and build-to-suit basis, delivering up to 80,000 square metres of high specification logistics facilities.

On completion, LOGOS Bac Ninh Logistics Estate will have an estimated end value of circa $70 million.

LOGOS is currently in discussion with a number of existing and new customers regarding this property.

The Vietnamese logistics market continues to experience strong growth driven by global trade wars, decentralisation of supply chains, and the natural evolution of the market.

Vietnam has led a successful response to the COVID-19 pandemic and is well-positioned to rebound for further growth. Occupier demand, driven by e-commerce and third-party logistics operators, remains solid as occupiers are starved of suitable logistics facilities to sustain the growth of their business operations. LOGOS’ Asia-Pacific portfolio comprises of 100 logistics estates across nine countries with assets under management of approximately $9.5 billion.

LOGOS counts some of the world’s largest fund managers as its shareholders, including ARA Asset Management, a leading Asia-Pacific real assets fund manager with a global reach, which took a majority stake in the company in March 2020.

This portfolio will be modern, high-quality logistics facilities across the key markets of greater Ho Chi Minh City, greater Hanoi, and greater Danang.

The new venture is the fourth one closed by Logos this year, with the group raising over $1 billion throughout the region despite the current market disruptions. Through this venture, Logos and its investment partner aim to establish a modern, quality portfolio of logistics facilities to support local and international customers’ growth across Vietnam.

LOGOS’ managing director and co-CEO Trent Iliffe said that the group’s move into Vietnam is an important step in its regional growth strategy driven by customers’ needs.

“We are pleased to be partnering with a leading global institutional investor as part of this move. Being able to establish this new venture in the midst of the COVID-19 pandemic is testament to Vietnam’s exciting growth story, which is driven by the global trade wars, decentralisation of supply chains, and a natural evolution of this market, and LOGOS’ proven track record across Southeast Asia,” said Iliffe.

LOGOS’ Southeast Asia managing director Stephen Hawkins added that after establishing its Southeast Asia business in 2016, the group has undertaken a targeted growth programme across the region from Singapore to Indonesia, Malaysia, and now Vietnam as it looks to support customers’ growth strategies across this fast-developing region.

“Vietnam’s strong underlying market fundamentals and the significant growth in e-commerce makes it an attractive market for investors and customers alike,” said Hawkins.

LOGOS entered the Vietnamese market earlier this year with the appointment of Glenn Hughes, a real estate and infrastructure specialist who has worked in both private and government sector organisations across Southeast Asia, Australia, and the Middle East as head of Vietnam to lead the group’s in-country strategy.

“The long-term potential of the Vietnamese logistics market is supported by strong tailwinds as companies seek to diversify their supply chains across multiple countries and further invest in technology within their facilities to meet the growing demand for e-commerce,” Glenn commented.

LOGOS has identified an attractive pipeline of development sites for this venture and will be progressing with strategic acquisitions over the coming months.

It is planned that LOGOS would be able to deliver a steady pipeline of speculative and built-to-suit logistics facilities for its customers in key logistics locations, being ready for occupation over the next 12 to 18 months.

It counts some of the world’s largest fund managers as its shareholders, including ARA Asset Management, a leading Asia-Pacific real assets fund manager with a global reach, which took a majority stake in the company in March 2020. MIRA Real Estate acted as exclusive financial adviser to LOGOS for the venture.

Travel companies need to develop unique products that are responsible for the local community and eco-friendly to meet the requirements of tourists. 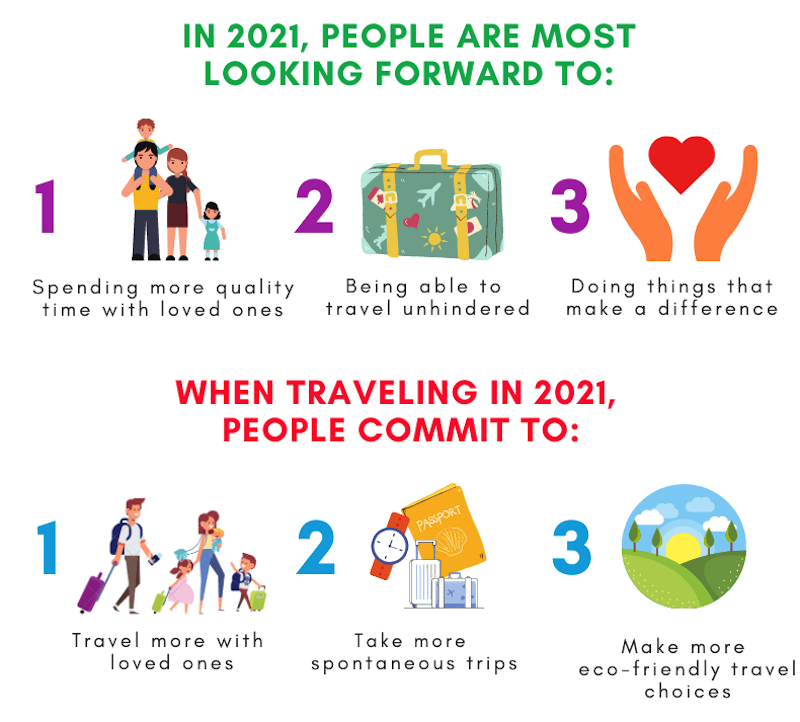 Sustainable tourism has become a trend due to the impacts of the Covid-19 pandemic, Mr. Phung Quang Thang, Vice Chairman of the Vietnam Travel Association said and adding that health problems and risks are primary concerns for Vietnamese travelers.

Therefore, travel companies need to develop unique products that are responsible for the local community and eco-friendly to meet the requirements of tourists, Mr. Thang said.

The survey also revealed that 33% of Vietnamese respondents were interested in spending on traveling more with friends or family and 14% surveyed people are more readily to take spontaneous trips this year.

Regarding what Vietnamese travelers expect in 2021, those aged 18-24 and 35-44 are most looking forward to making a difference this year. Vietnamese aged 25-34 wished to have quality time with their loved ones, while those in age group of 45-54 and 55+ expected to be able to travel unhindered.

“2020 was a year of survival and of making the best of it. Despite all that struggle and hardship, there’s a global desire for travel, connection, meaning and spending time with friends and family. Travel will resume eventually, because, ultimately, the human desire to travel is unstoppable,” said Mr. Tim Hughes, Vice President of Corporate Development, Agoda.

The survey, conducted by Agoda, attracted more than 16,000 people.

LONDON — Alex Ferguson, the most successful manager in Manchester United’s history, underwent emergency surgery on Saturday for a brain haemorrhage, the club said.

“The procedure has gone very well but he needs a period of intensive care to optimise his recovery,” a statement said. “His family request privacy in this matter.”

United captain Michael Carrick tweeted: “Absolutely devastated to hear about Sir Alex being unwell in hospital. All my thoughts and prayers are with him and his family. Be strong boss.”

Ferguson’s son Darren, the manager of Doncaster Rovers, was reported to have missed his team’s match on Saturday for family reasons.

The 76-year-old was United manager from 1986 to 2013, winning the Champions League twice, the Premier League 13 times and five FA Cups.

He was knighted in 1999, the year United achieved a treble by winning those three trophies in one season.

He made his managerial reputation in his native Scotland with Aberdeen, winning three Scottish League titles and the European Cup Winners’ Cup.

After taking Scotland to the 1986 World Cup following the death of Jock Stein, Ferguson joined United in November 1986 after Ron Atkinson was sacked.

It took three and a half years to achieve his first success with them, the FA Cup title in 1990.

From there he was unstoppable, quickly achieving his ambition to “knock Liverpool off their perch” as United became the team of the 90s and beyond.

In 2001 he decided to leave the following year but was persuaded by his family to change his mind and stayed on until 2013.

He remained a regular visitor to Old Trafford and was there last Sunday to make a presentation to old rival Arsene Wenger on the Arsenal manager’s last appearance at the ground before he leaves the London club.

Since Ferguson left, United have struggled to repeat his triumphs and great rivals Manchester City have now won two titles in that time, including this season’s.

City were quick to tweet: “Everyone at Manchester City wishes Sir Alex Ferguson a full and speedy recovery after his surgery”.

Scottish politicians joined in with tributes to a life-long socialist.

Nicola Sturgeon, the First Minister of Scotland, wrote: “My thoughts are with Alex Ferguson and his family – wishing him a full and speedy recovery.”

Ruth Davidson, the Scottish Conservative leader, tweeted: “So many people will be wishing Alex Ferguson well and sending their thoughts to his family tonight.”