Chairman of the municipal People’s Committee Chu Ngoc Anh hosted a reception to the Italian Ambassador to Vietnam Antonio Alessandro on March 24.

At the meeting, the Hanoi mayor showed his delight at positive progress in all aspects of the Vietnam-Italy strategic partnership so far, especially the activities jointly held in 2018 when the two countries celebrated 45th anniversary of diplomatic relations.

There are many events organized by government agencies on both sides, as well as cultural exchanges between the peoples of Vietnam and Italy in recent times. Among them, the event entitled “Italian Square 2018” stood out.

Regarding the upcoming activities of the city, Chu Ngoc Anh said that Hanoi is working closely with related units to well organize SEA Games 31 and Para Games 11, the two major sporting events in the region, by the end of 2021.

In the preparation for these two games, Hanoi has received support from a number of international agencies and foreign countries, including Italy.

Ambassador Antonio Alessandro expressed his gratitude to the city government for creating favorable conditions for the Embassy’s activities to go well in recent years.

Vietnam and Italy have upgraded their tie to strategic partnership since 2013.

Alessandro said he believes that the two sides will continue to cooperate extensively in all fields. At the same time, he welcomes regular dialogues between the two countries in searching for potential cooperation and business exchange in the future.

According to the ambassador, there are quite a few Italian businesses and experts from relevant fields willing to cooperate and support Hanoi in organizing the SEA Games 31 and Para Games 21.

He also mentioned bilateral cooperation in the field of cultural heritage conservation, an area where Italy has a lot of experience.

In addition, many Italian businesses also seek cooperation with Vietnamese partners in the field of urban planning, especially the development of satellite towns in Hanoi’s periphery in the coming time.

Anh said Hanoi strives to become a venue for international cultural and sports events in the next five years. Therefore, the city always welcomes international cooperation in relevant fields to achieve its goal.

Mr. Ngoc Anh also pledged that Hanoi would create the best conditions for Italian enterprises doing business in the capital.

The Ministry of Culture, Sports and Tourism have announced that 10 esports competitions will be included at the upcoming 31st Southeast Asian (SEA) Games.

Most notably, a League of Legends tournament will be played on PC, along with two Wild Rift competitions on mobile, one for men and one for women.

The full list of esports games to be played at the SEA Games 31 includes:

The esports events at the regional competition will be held at the National Convention Center in Hanoi between November 21 and December 2.

The SEA Games is a biennial multi-sport competition which features the participation of the 11 countries of Southeast Asia. They will compete across 40 sports in 526 separate events.

This marks the second time that the country will host the regional games, with the previous occasion coming back in 2003.

The events will be a dress rehearsal in how to prevent the spread of Covid-19 as organizers host an international sports event during a global pandemic.

“At the moment we are currently gauging how many athletes would like to participate in the test events… We will coordinate with the government once we can confirm those numbers,” senior Tokyo 2020 official Yasuo Mori told reporters.

Test events for five competitions, including track and field and the marathon, could involve foreign athletes participating, the organizers said.

Asked what Tokyo 2020 would do with the test events if there were another wave of coronavirus infections, Games Delivery Officer Hidemasa Nakamura said they were “inextricably linked with the domestic and local coronavirus situation.”

Tokyo 2020 is planning 18 test events before the Games begin on July 23. Test events for skateboarding and shooting were this month postponed from April until May because of the pandemic’s impact on scheduling.

The Olympic Torch relay started last week, with bystanders asked to stay masked, stand apart and clap instead of cheer for torchbearers as organizers try to ease public safety concerns.

Tokyo 2020 organizers have banned international spectators from attending the Games. The decision appeared to be received positively by the Japanese public, with 85 percent in favor according to a poll by daily Asahi Shimbun published last week.

The same poll also suggested that people were still wary of holding the event this summer, with 36 percent preferring another postponement, 33 percent an outright cancellation, and 27 percent saying the Olympics should be held as planned.

The Ministry of Culture, Sport and Tourism explained it is a message Vietnam wants to deliver to governments and people in Southeast Asia to exhort them to unite and strengthen the bloc’s position internationally.

Para Games 11 will kick off after its conclusion and be held from December 17 to 23 with 11 sports.

Most of Vietnam’s squads for the games have begun training in camps.

The organizers have begun preparatory works such as setting up and repairing transportation, medical and logistics facilities.

However, some aspects have been delayed due to the Covid-19 pandemic, especially finding sponsors for the events.

A kaleidoscope of cultures, rituals, and cuisine of ethnic minority groups around the country will be highlighted throughout April at the Vietnam National Village for Ethnic Culture and Tourism in Son Tay town on the outskirts of Hanoi. A mountainous market in northern Vietnam


A series of events will be organised in honour of Vietnam Ethnic Group Cultural Day (April 14) and to celebrate the 46th anniversary of the Liberation of South Vietnam and National Reunification Day (April 30).

Folk songs, dance, cuisine, specialties, and traditional customs and rituals of ethnic minorities will be on show.

The highlight will be “Mountainous market – Hoang Su Phi destination”, which features the cultures of ethnic minority groups in the Northwestern and Northeastern regions, such as the Dao, Mong, La Chi, and Thai. An exhibition with the theme “Hoang Su Phi – a magnificent haven” will be held to promote local tourism, while booths from Hoang Su Phi district will sell handicrafts and staples.

Several rituals will be re-enacted at the event, so as to preserve traditional cultures and bring local tourism products closer to visitors. They include the Ban Vuong festival of the Dao people, Co Um Do of the La Chi people, and Tet thanh minh (Ancestors Day) of the Dao people in Hanoi’s Ba Vi district.

On Hung Kings Memorial Day (April 21), the village will host a wide range of activities to introduce traditional cultures and cuisine. 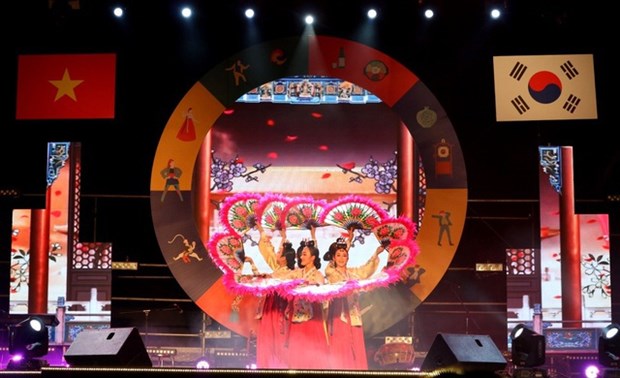 An art performance during the Korean Culture Day in Quang Nam in 2019 (Photo: VNA)

Quang Nam (VNA) – Korean violin artist JMI KO, singers Seok Hun and Hansara, and K-pop dance troupe will perform in Hoi An ancient city of Quang Nam from April 9 to 11 during the Korean Culture Day event, an annual cultural exchange between the Republic of Korea and the central province.

The event will be held at the An Hoi Sculpture Garden , featuring an array of cultural performances, cuisine, and traditional arts of the RoK and Hoi An city.

The UNESCO-recognised world heritage Hoi An ancient town and the International Mask Arts & Culture Organisation and Andong City of the RoK inked an agreement in promoting cultural exchanges, exhibitions and friendship visits from 2017.

It aimed to boost diplomatic ties between the RoK and Vietnam in general, and the central province of Quang Nam in particular.

The RoK is one of the top five sources of foreign visitors to Quang Nam./.