The event was attended by heads of ADSOM+WG of ASEAN member countries, representatives of Defense Ministries of the bloc’s partners (Russia, China, the U.S., Japan, the Republic of Korea, Australia, New Zealand, India) and representatives of the ASEAN Secretariat.

The Vietnamese delegation to the meeting was led by Senior Colonel Pham Manh Thang, Deputy Director of the Department of Foreign Relations under the Vietnamese Ministry of National Defense.

This was the third meeting that Brunei had hosted during the country’s 2021 ASEAN Chairmanship Year.

Speaking at the opening ceremony, Head of Brunei’s ADSOM+ WG highlighted the active participation of ASEAN member countries and the bloc’s partners in the event, affirming that their attendance showed  their support for Brunei as ASEAN Chair in 2021. He expressed belief that the meeting will be a success.

As reported, this ADSOM+WG was held to review the final preparations for the 8th ASEAN Defense Ministers’ Meeting Plus (ADMM+) which is scheduled to take place virtually on June 16.  Delegates discussed and agreed on the agenda and draft joint statement for the upcoming 8th ADMM+.

Bac Giang authorities have successfully found outlets for lychee amid the Covid-19 pandemic. On June 8, the authorities in Bac Giang Province held an online meeting with local and foreign experts to discuss ways to distribute lychee.

Le Anh Duong, chairman of Bac Giang People’s Committee said they had built three plans to distribute the lychee. “We still have contacts with regular customers and close connection with overseas partners,” he said.

Despite difficulties caused by Covid-19, a large number of agricultural products have been exported to Yunnan, China, and the bilateral trade turnover increased by 40%.

Tran Kim Nga, PR manager of MM Mega Market Vietnam, said they had launched a discount programme from June 1 to 16 for the lychee from Bac Giang. The fruit will be displayed at prime locations to celebrate the Doan Ngo Festival or Pest Exterminating Festival. They also held a Bac Giang Lychee Week at MM Mega Market An Phu in HCM City. The events and the lychee will be promoted on social media like Facebook and Zalo.

It is expected that 500-700 tonnes of lychee will be sold along with pineapples, pumpkins and watermelon.

Ambassador Extraordinary and Plenipotentiary of Vietnam to Japan Vu Hong Nam said Japan imported lychee from various countries like China, Mexico and Vietnam. Vietnamese fruit had been well received after it was sold at the Aeon supermarkets.

“Many Japanese customers gave good reviews and they also bought the lychee for their friends and families,” he said.

Statistics from Japan Customs show that in 2020 when the lychee from Vietnam was first imported into Japan, it already took 10% of the market share. It is hoped that the litchi from Vietnam will get more popular this year. 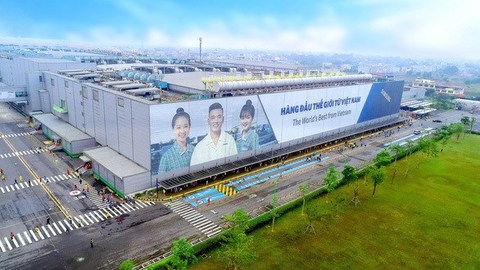 Samsung Electronics Vietnam is seeking support from the Vietnamese Government to enter into a direct power purchase agreement (DPPA) scheme that will enable it to directly purchase renewable energy from producers, heard a recent meeting between its CEO Choi Joo Ho and Minister of Industry and Trade Nguyen Hong Dien.

Under the pilot scheme, independent renewable energy developers with an installed capacity of 30 MW or more are permitted to supply electricity directly to private consumers for industrial manufacturing purposes.

The scheme will be conducted nationwide with a limited total size of up to 1,000 MW.

Three or four other major enterprises also want to join the programme.

The Ministry of Industry and Trade (MoIT) plans to pilot the scheme from 2021 to 2023 at a scale ranging from 400 to 1,000 MW, according to the ministry’s Electricity Regulatory Authority of Vietnam (ERAV).

At the end of the trial period, the ministry will conduct a review and determine if the arrangement can be made permanent in 2024, it said.

The scheme is seen as a win-win mechanism for both power generators and purchasers as it will enhance competition and help FDI firms access clean energy for production.

Once it begins, Electricity of Vietnam (EVN) will no longer be the only power distributor in Viet Nam. — VNS