The information was shared at today’s virtual meeting in Ho Chi Minh City. After hearing reports on  the COVID-19 situation from districts and departments, Nguyen Thanh Phong, chairman of the city People’s Committee decided to continue social distancing in the city until June 30.

The chairman said that the number of untracked COVID-19 cases is rising in the city, with the pandemic spreading since the beginning of May through 4-5 infection cycles so far.

“The new cases will be detected through screening and tracing in the near future. Therefore, the city will maintain social distancing for another two weeks in line with Directive 15,” he added.

At the meeting, Nguyen Van Nen, Secretary of Ho Chi Minh City Party Committee, said that the city is channelling all efforts to fight against the COVID-19 pandemic. However, the number of infected cases and F1 and F2 people in quarantine zones is increasing. Meanwhile, COVID-19 is still spreading silently in the community.

“This poses a challenge for the city to control the pandemic to realise the dual goals of COVID-19 pandemic containment and recovery in the new normal. Thus, the extension of social distancing time will help the city strengthen COVID-19 prevention efforts,” he added.

The novel coronavirus has spread to all districts of Ho Chi Minh City, which is considering an extension of social distancing measures after two weeks of implementation.

Thu Duc, a district-level city, and the other 21 districts have all detected COVID-19 infections as of Monday, with Can Gio District on Sunday logging the first-ever case in the ongoing fourth wave that has raged in Vietnam since late April.

The Ministry of Health confirmed 30 new cases in Ho Chi Minh City on Monday morning, including three in District 5, seven in Go Vap District, 15 in Hoc Mon District, one in Cu Chi District, and four in Binh Tan District.

The ministry announced the city’s biggest-ever daily increase of 95 local cases on Sunday, when 53 fully vaccinated employees at the Ho Chi Minh City Hospital for Tropical Diseases, a major COVID-19 treatment center in southern Vietnam, were diagnosed with the respiratory disease.

Health authorities have basically broken the city’s largest infection chain linked to Revival Ekklesia Mission, a Christian congregation based in Go Vap, with about 450 patients traced to it, said Nguyen Tan Binh, director of the municipal Department of Health.

But other chains have emerged because the virus may have silently spread in the community, Binh added.

The health department recommended on Monday that the city extend the enhanced social distancing measures having put in place since May 31 by two weeks to stall community transmission.

City authorities are set to make the final decision later the same day.

Vietnam has registered 7,424 domestic cases in 39 out of its 63 provinces and cities since the fourth wave erupted on April 27, according to the health ministry’s data.

Bac Giang Province in the north is leading the fourth round’s tally with 4,068 patients, followed by northern Bac Ninh Province with 1,352, Ho Chi Minh City with 819, and Hanoi with 459.

The Southeast Asian nation has reported 10,630 cumulative infections as of Monday morning, including 3,998 recoveries and 59 deaths.

It administered 43,222 AstraZeneca vaccine shots to medical staff and other frontline workers on Sunday, taking the total to 1,498,323 doses since inoculation was rolled out on March 8.

Authorities in Binh Tan District, Ho Chi Minh City have sealed off the entire Ehome 3 apartment complex and will test all residents there for COVID-19 after an infection chain was determined to be related to this location.

The lockdown started at 10:00 am on Sunday and will remain in place until further notice, according to Truong Dinh Nhan, director of the Center for Disease Control of Binh Tan District.

All of about 7,600 residents living in 14 blocks of the apartment complex will also have their samples collected for COVID-19 testing.

The residents have been informed of apps connected with systems of supermarkets and retail stores for online purchases of supplies and necessities, according to To Hoang Giang, chairman of An Lac Ward, where the Ehome 3 apartment complex is located.

“Supplies and necessities will be gathered at the checkpoints and transferred by the ward’s functional forces to each block for residents to pick up,” said Giang.

“We affirm that residents in the apartment buildings will not face undue difficulties during this temporary blockade.”

Previously, the first case of COVID-19 was detected at a flat on the fourth floor of Block A6 at Ehome 3 on May 30. The patient was later numbered 7,409.

On the morning of June 11, the Ho Chi Minh City Center for Disease Control said that through epidemiological investigations, a chain of infections was recorded in relation to the Ehome 3 apartment complex.

The authorities then temporarily sealed off some blocks of the complex to localize the infections.

On Sunday, two more suspected cases, a couple selling agricultural products on the ground floor of Block A9, were discovered at this apartment complex.

Binh Tan District thus decided to temporarily cordon off all 14 blocks of Ehome 3 to carry out a full sampling drive.

Vietnam has been hit utterly hard by a fourth virus wave since April 27, with 7,424 local infections having been recorded in 40 of its 63 provinces and cities ever since, according to the Ministry of Health’s data.

The northern province of Bac Giang is leading this round’s tally with 4,068 patients, followed by northern Bac Ninh Province with 1,352, Ho Chi Minh City with 819, and Hanoi with 459.

Recoveries have reached 3,998 while 59 patients have died, most with critical underlying medical conditions like cancer and chronic renal failure.

Ho Chi Minh City chairman Nguyen Thanh Phong has decided to extend the social distancing period in the metropolis by two weeks as the pandemic situation is still very complicated.

From 0:00 on June 15 to 0:00 on June 29, the city will have to follow social distancing measures under the prime minister’s Directive No. 15, Phong said at a meeting on Monday.

The directive specifies that a gathering or meeting with more than 20 people in one room is prohibited.

Also, a gathering of more than 10 people outside office buildings, schools, and hospitals is not allowed.

People should keep a safe distance of at least two meters in public places, while non-essential businesses and services will remain closed.

All citizens, especially those above 60 years old, must only go outside when necessary.

Travel from virus-hit areas to other localities is restricted.

Over the next week, stricter or loosened social distancing rules will be applied in certain locations depending on the corresponding pandemic situation, chairman Phong stated.

A 15-day social distancing period was previously reinstated in Ho Chi Minh City from May 31.

Regulations under the prime minister’s Directive No. 15 were applied during this period.

However, Go Vap District and Thanh Loc Ward in District 12, which were considered as two major COVID-19 hotbeds in the city, had to follow stricter rules under the PM’s Directive No. 16.

Vietnam has documented 10,730 COVID-19 cases as of Monday afternoon, with 3,998 recoveries and 59 deaths, according to the Ministry of Health’s statistics.

The country has recorded 7,524 local infections in 40 provinces and cities since the beginning of the fourth transmission wave on April 27. 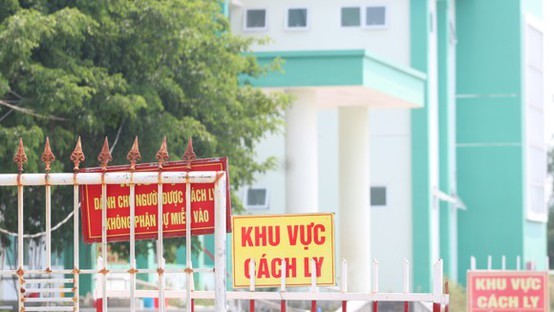 The Center for Disease Control of the southern metropolis said that authorities in Thu Duc City and District 6 have conducted zoning and tracing measures in areas where Covid-19 patients at the Hospital for Tropical Diseases are living.

The Center for Disease Control yesterday night announced to record two more Covid-19-infected patients who are residing at a tenanted house in Hiep Binh Street in Thu Duc City.
Authorities in Ho Chi Minh City’s Binh Tan District have locked down the entire Ehome 3 apartment complex from 10:00 am yesterday and will carry out Covid-19 test on all residents there after a couple are infected by the coronavirus in the apartment complex, said the Center for Disease Control.

Ho Chi Minh City Television (HTV) has acquired the screening rights for the 2021 Copa America in Vietnam from digital firm Next Media.

The Copa America redistribution package allows HTV to air 28 games in the tournament on its HTV7, HTV9, HTV The Thao, and HTV1 channels and the HTVC mobile app.

Copa America, the championship of South American nations, is the oldest football competition of national teams in the world and considered one of the top three international tournaments, next to the Euro and World Cup.

This year’s tourney was initially scheduled to be held in Argentina and Colombia.

However, due to the new outbreaks of COVID-19 in these two countries, the South American Football Confederation (CONMEBOL) eventually changed the location to Brazil.

With the participation of ten CONMEBOL teams, who are divided into two groups, the event commenced on Monday morning (Vietnam time) and will run until July 11.

Group A includes Argentina, Bolivia, Uruguay, Chile, and Paraguay while Brazil, Colombia, Peru, Ecuador, and Venezuela compete in Group B.

The top four of each group will advance to the quarterfinals.