Long Hoa border station in Long Hoa Commune, HCMC’s Can Gio District
The checkpoints are responsible for frontline border control operations at sea, controlling all incoming and outgoing vessel traffic to prevent illegal entry to the mainland for the purpose of guarding against the virus.
Only vessels are allowed to dock at ports to pick up and deliver goods while crew members are banned to leave the ship to enter the city.
In addition, the maritime border unit has also established 24 monitoring teams that will coordinate with ports and international quarantine agencies to stop sailors’ illegal entries to the city. A system of inspection cameras will be available 24 hours a day, 7 days a week at ports.
In Kien Giang Province, the provincial Border Guard Command has increased the number of members of the border force to tighten border control on cross-border routes in Ha Tien town, Giang Thanh District and the island city of Phu Quoc.

HCMC – Two metro trains with three carriages each of HCMC’s first metro line project linking Ben Thanh Market in District 1 with Suoi Tien Theme Park left Japan on May 1 and are expected to arrive in the city on May 10.

The trains were manufactured at Japan’s Kasado factory. After completing customs procedures at a local port, the two trains will be transported to Long Binh Depot in Thu Duc City in the following three to four days, the local media reported.

Four other trains of the metro line will have six carriages each. Of these, two trains will be transported to HCMC next month and the other two in July.

HCMC’s metro line No. 1 will have 17 trains, with the first phase using the three-car trains capable of carrying 930 passengers and the following phase using six-carriage ones, which are all manufactured in Japan.

The first train arrived in Khanh Hoi Port in October last year and is at Long Binh Depot for an upcoming trial operation.

A 150-meter section of Le Loi Street between Nguyen Hue and Pasteur streets, a prime location in HCMC, was fully reopened on Wednesday after being blocked since 2014.

The station in front of the Opera House on Le Loi has been built for metro line No.1 which runs 19.7 kilometers from Ben Thanh Market in District 1 to Suoi Tien theme park in District 9.

It is one of three underground stations out of a total of 14, some of which are also elevated.

The reopened section of the street has been asphalted and had lane markings painted, the sidewalks have been paved with bricks and the underground drainage and electricity and telecom cables are shipshape.

A part of the construction site on the street remains, with workers now linking the Opera House and Ben Thanh underground stations.

The work is expected to be completed by the end of this year, and the street fully cleared.

Owners of shops on Le Loi are overjoyed that they can get their business back on track after seven years.

“For two weeks now I have been focusing on reorganizing the entire store since its street-front location has eventually been restored, and making plans to expand,” Nguyen Khanh Lan, who runs an art materials shop, said.

Work on the much-delayed line, which began in 2012, is more than 84 percent complete now.

The city had hoped to begin commercial operations by the end of this year, but that was delayed by the Covid-19 outbreak to next year.

It plans to build eight metro lines running a total of 220 km.

The station, located on Ton Duc Thang Street near the Saigon River in District 1, is 240 meters long, 34 meters wide and 17 meters deep. It has two basements, featuring a ticket lounge and a train platform.

The first floor has already been completed, with progress pushed forward by a month, said the investor, the HCMC Management Authority for Urban Railways (MAUR).

The station has five entrances, including two along Ton Duc Thang Street and one along the Saigon River bank.

Once the entire station is completed, it will also function as an important traffic hub in the city’s downtown area as it connects with several major streets including Ton Duc Thang, Nguyen Huu Canh, Le Thanh Ton and Ly Tu Trong.

For now, tracks have been laid underground to link Ba Son with the Opera House Station, which has been basically completed on Le Loi Street just in front of the city’s iconic Opera House. This connection is 781 meters long.

These are two of the three underground stations for the city’s first metro line, which will run 19.7 km from Ben Thanh Market in District 1 to Suoi Tien theme park in Thu Duc City with 14 stations in total.

The other underground station, Ben Thanh, is now 88 percent complete.

Work on the much-delayed line, which began in 2012, is more than 84 percent complete now.

The city had hoped to begin commercial operations by the end of this year, but this has been delayed by the Covid-19 outbreak to next year.

It plans to build eight metro lines running a total of 220 km.

Speaking at a recent city People’s Council meeting, Nguyen Thanh Phong, chairman of the city People’s Committee, said that two transport projects worth more than VND12 trillion (US$521.8 million) have been approved. 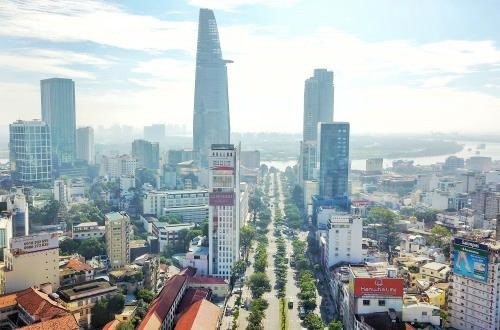 A view of HCMC. The city will focus on major transport projects, among other initiatives, to become a smart city by 2025. VNA/VNS Photo

These include An Phu Intersection in Thu Duc new city and the renovation of Tham Luong, Ben Cat and Nuoc Len canals, to be implemented from now to 2025, according to Phong.

It will cost VND3.926 trillion to build An Phu intersection, including VND1.8 trillion from the central State budget and VND2.126 trillion from the city budget.
The three-level intersection will have overpasses and a tunnel. It will start from the approach road to the HCM City-Long Thanh-Dau Giay expressway and end at the Luong Dinh Cua Street, which often sees serious congestion.
In addition, the upgrade of the Tham Luong, Ben Cat and Nuoc Len canals will need VND8.2 trillion, including VND4 trillion from the State budget and VND4.2 trillion from the city budget.
The 32km-long project goes through District 12, Binh Tan, Tan Phu, Tan Binh, Go Vap, Binh Thanh and Binh Chanh districts.
It is expected to help reduce flooding in the central business district and the northwestern part of the city. It will also improve waterway connections between the city and southern provinces.
‘Smart city’ status by 2025
Phong said the city would focus on “research and development of AI applications in HCMC” in order to become a smart city by 2025.
Under the programme to become a smart city by 2025, a database of all sectors, ranging from housing, transport and environment to healthcare, will share data with all of the city’s administrative departments.
This will help social organisations, businesses and residents have better access to public information and services online through mobile devices and other means, according to Phong.
The city will also focus on developing AI technologies and improving human resources by using AI in education and training, and enhancing academic communications with foreign AI professionals.
In addition, an innovative urban area in the eastern part of the city will continue to be built. The city has already approved the establishment of Thu Duc new city by merging the three eastern districts of 2, 9, and Thu Duc.
The new city will cover more than 211sq.km and be home to more than 1.1 million people. It is expected to promote economic growth in the city and the southern region.
It will serve as a center for three main functions: scientific and technological research and application; education and training of high-quality human resources; and production and trade of hi-tech products and services.
It is expected to contribute a third of the city’s GDP, accounting for 7 percent of national GDP.
The city has been working on the eastern innovative urban area project, including the Thu Thiem New Urban Area in District 2, the Northwest urban area, and the Can Gio sea tourist urban area, according to Phong.
Phong pointed out that the city needs more capital for public investment in infrastructure.
He said, for example, from 2016-2021, the city needed VND302.8 trillion to implement nearly 1,950 public transport projects, but the city only managed to allocate about half of that amount.
The city has asked the central government for permission to raise the budget-revenue retention ratio to 24 percent in the 2021-2025 period, and 33 percent in the 2026-2030 period. The latter ratio was granted to the city back in 2003. The ratio refers to revenue that the city gives to the central government.
“The new ratio will ensure that the city will achieve sustainable development,” according to Phong.
With a population of 13 million, HCMC, as the nation’s economic locomotive, contributes 24 percent of the country’s GDP and 27 percent of the national budget.