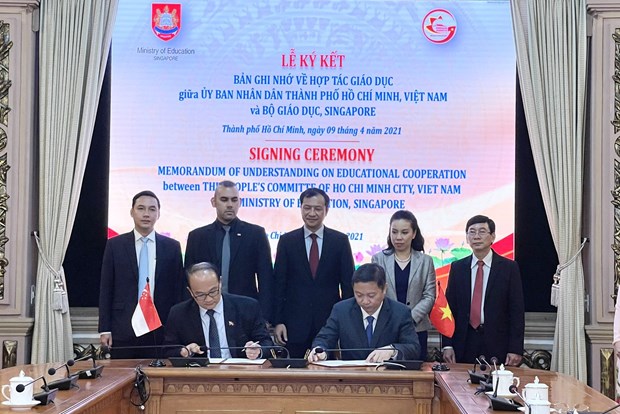 At the signing ceremony (Photo: VNA)


HCM City (VNA) – The People’s Committee of Ho Chi Minh City and the Singaporean Ministry of Education will cooperate in general and higher education under a memorandum of understanding ( MoU ) reached on April 9.

The document was signed by Vice Chairman of the municipal People’s Committee Duong Anh Duc and Singapore an Consul General in HCM City Ray Kho.

For general education, the two sides will exchange knowledge and work together to improve the quality of teachers and education managers, while stepping up IT applications in teaching.

They will also cooperate to raise the quality of higher education in HCM City and encourage joint research projects.

The MoU is set to take effect for five years and would be expanded for another five years with consensus of the two sides./. 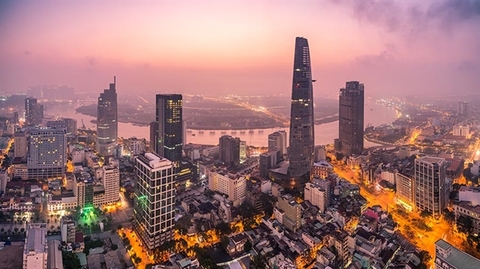 A view of the HCM City skyline. The city aims to become a leading start-up hub in Southeast Asia over the next five years. Photo Vietnam-briefing.com

HCM City has approved plans to develop 1,000 start-ups as part of its efforts to become a leading start-up hub in Southeast Asia over the next five years.

The plan envisages enabling 3,000 businesses to improve their innovation capacity and help 100 access venture capital by 2025.

To achieve the targets, the city will develop infrastructure and an eco-system that would enable start-ups to improve productivity and competitiveness and develop higher-quality products in order to go regional and, later, global.

In 2016 – 20 it assisted 650-700 businesses annually with improving their innovation capacity.

Last year, Viet Nam jumped 13 positions to rank 59th out of 100 economies with the best start-up ecosystems in the world, according to a ranking by StartupBlink, a global start-up ecosystem map and research centre.

According to Robert Tran, CEO of consulting firm RBNC for North America and Asia Pacific, Viet Nam has great potential to become a start-up hub in Southeast Asia due to a number of “good entrepreneurship ideas” that could be expanded regionally and even globally.

Viet Nam also has a population large enough for start-ups to experiment locally first before reaching out to the world.

But the success rate of start-ups remains low (at roughly 3 per cent) since many fail to clearly identify their long-term business goals.

He said the Government should put in place a comprehensive legal framework to ensure protection for investors and assistance and support for start-ups.

In 2016 the Government approved a plan to build a start-up eco-system for innovative and sustainable development of entrepreneurship by 2025.

In February this year it decided to build a network of innovation centres in Ha Noi, Da Nang and HCM City to support research and development by start-ups.

It wants to make the national start-up eco-system the 15th best in the Asia-Pacific in the near future.

According to Do Ventures, a HCM City-based venture capital firm, in the first half of last year the country accounted for 16 per cent of the total investment in tech start-ups in Southeast Asia to rank third behind only Singapore (37 per cent) and Indonesia (30 per cent).

HCM City accounts for more than 50 per cent of the country’s start-ups.

Located in the heart of Southeast Asia and Viet Nam’s most economically dynamic city, HCM City has also been chosen by expats as a base to build start-ups.

It is also an attractive destination for foreign entrepreneurs, experts have said.

It has a well developed infrastructure for online business, its online payment system works efficiently and its internet is reliable.

It has a high concentration of talented young people, who are ambitious, well educated, open-minded, and comfortable with trying new ideas and sharing experiences.

The city has a population of some 13 million, more than half under 35 years of age. Many young people are influenced by western culture and appreciate international brands with good quality.

The city contributes 20 per cent to national GDP.

It is home to more than 3,000 foreign representative offices from 60 countries and territories. — VNS A corner of HCM City

In the document, Phong said that HCM City was already Vietnam’s financial centre and had a prime location. Its population and size account for 9.35% of the country’s population and 0.63% of Vietnam’s landmass, while the city’s contribution accounted for 23% of GDP and 27% of the state budget. 33% of the FDI projects were in HCM City, not to mention venture capital funds and remittances.

This means financial activities and demand in HCM City are very high and a financial centre would help leverage new opportunities.

He went on to say that Vietnam is in a different time zone than the existing 21 international financial centres which can be an advantage to attract investments. HCM City is on the 3 flight hours away from Singapore, Malaysia, Thailand, India, China, Philippines, Japan, and South Korea.

The changes in the capital flows will attract investors and boost economic development, local infrastructure and living standards.

The HCM City People’s Committee has proposed developing a regional and international financial center project in the city.

According to municipal authorities, the proposal to the PM was made because the city meets all elements to form a regional and international financial center.

In addition, the city is only about three hours by air from Asian economies such as Singapore, Malaysia, Indonesia, Thailand, India, China… and further, to Japan, South Korea and Taiwan.

“Those are the best conditions for developing a regional and international financial center in the future,” the document stated.

According to the city People’s Committee, the formation of an international financial center is inevitable in a modern economy and an expression of a dynamic, developed and integrated country. It is a driving force for economic growth, making an important contribution to elevating the nation to a new position on the world map of developed financial centers.

The proposal to build a regional and international financial center has received the support of the Government and ministries, which defines the city as a special city, a leading economic-financial-service center in the country and the region.

On that basis, the HCM City People’s Committee asked the Prime Minister to approve the policy on the city’s regional and international financial center project.

If approved, the development of the financial center will be designed in three periods: short, medium and long term.

The Can Gio District in HCM City will be developed into a resort, ecotourism centre. HCM City to turn Can Gio District into tourism centre

During the meeting on April 1, Chairman of HCM City People’s Committee Nguyen Thanh Phong emphasised that they would give top priority to the urban planning in Can Gio District.

Can Gio Sea Encroachment Project is also known as Can Gio Tourism Urban Area Project. In June 2020, the PM approved to increase the size of the project from 600ha to 2,870ha with an investment of VND217trn (USD9.4bn). In February, HCM City People’s Committee issued four decisions and approved the 1/500 scale detailed planning for the Can Gio Tourism Urban Area Project inside Can Gio District.

Phong asked the Department of Planning and Architecture to collaborate with the authorities in Can Gio to speed up the work and further complete the planning by the final quarter. There must be a development plan for buffer zone and coastal urban areas and how to minimise the impacts on the existing biosphere reserves.

He went on to say that local authorities can hire independent consultants if necessary.

Can Gio District has many advantages. For example, it is a world biosphere reserve with a landmass similar to Singapore’s. With large areas of forest and islands, it is an ideal place for resorts and ecotourism.

A zoning and urban planning idea for Can Gio District contest was held a few years ago to find the most suitable idea and consultant company. In August 2018, the Department of Planning and Architecture was asked to work with the winner to start the plan. In September 2019, the city party committee approved the adjusted urban planning for Can Gio.

Anyone returning from Le Hong Phong street in Dang Giang ward in Ngo Quyen district in Hai Phong, and road D35 in the Vietnam-Singapore residential area in An Phu ward in Thuan An city in Binh Duong will be supervised by HCDC and tested for the SARS-CoV-2 virus.

Both localities are connected to two COVID-19 patients, the Ministry of Health said on March 26.

The two patients illegally entered the country from Cambodia via Phu Quoc Island in the southern province of Kien Giang, and then flew to Hanoi on Vietjet flight VJ458 before travelling to Hai Phong in a private car.

Another patient from Binh Duong went to the Moc Bai border gate in Tay Ninh province to purchase goods a few days ago.

Meanwhile, a patient in HCM City who travelled with the two patients in Hai Phong is under quarantine at Cu Chi field hospital.

HCDC said two sites in connection with the positive case have been locked down in HCM City, including Quoc Thai Hotel in Binh Chanh district and alley no 102 on Le Van Tho street in Go Vap district.

Further contact tracing is ongoing and eight of her direct contacts (F1) and 23 contacts of the F1 cases have tested negative for the virus.

According to HCDC, authorities have discovered that four people who illegally entered Vietnam on a fishing vessel from Cambodia on March 22 had accompanied the three previously confirmed patients.

One of them had stayed at a hostel in Go Vap district and two others at a hotel in District 1 in HCM City, and another in Hanoi. All of them have tested negative for the virus.

HCM City and Phu Quoc Island City are seeking three other people who were on the vessel.

Phu Quoc authorities are conducting contact tracing involving the three COVID-19 patients, and 26 of their direct contacts have been found.

The city said that anyone who was at the venues related to COVID-19 patients should contact local health agencies for support.

Nguyen Luu Trung, Vice Chairman of the Kien Giang Provincial People’s Committee, said that because of the situation in Cambodia, the number of Vietnamese returnees via official and illegal entry is expected to increase in the upcoming time.

He asked border guards to work closely with the coast guard and naval force to review and rearrange checkpoints at sea, and use more patrols to prevent people from illegally entering Vietnam./.