Hanoi (VNA) – Indonesia’s National Narcotics Agency (BNN) on May 5 said it has seized a total of 581.31 kg of crystal methamphetamine from three international syndicates and arrested seven suspects.

Based on the evidence the BNN had, the crystal meth comes from Pakistan, Malaysia, and the Golden Triangle’s Myanmar. The Golden Triangle is the largest drug-producing region in Southeast Asia located in Myanmar, Thailand, and Laos.

The Southeast Asian archipelago has become a key destination and transit point for international drug trafficking.

In 2018, Indonesia n police said two separate busts resulted in the seizure of about three tonnes of methamphetamine coming from Taiwan.

In April, 13 members of a trafficking ring, including three Iranians and a Pakistani, were sentenced to death for smuggling 400 kilograms of methamphetamine into Indonesia./.

The Quang Ngai Department of Home Affairs has found it difficult to claim back VND10 billion from four individuals who studied abroad with provincial funding but didn’t return to work for provincial agencies as they had previously committed. 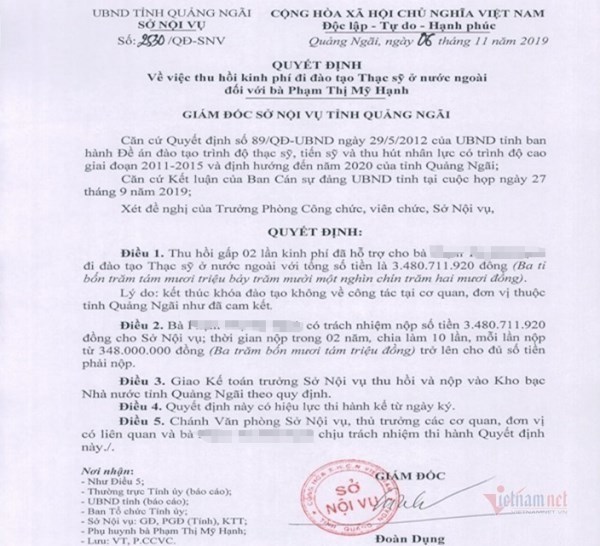 The director of the Department, Doan Dung, on April 28 told VietNamNet that the department twice sent documents to the four individuals, urging them to reimburse the funding because they did not return to the province to work in state agencies.

The individuals were sent overseas for a master’s degree program with the state’s money after they promised that they would return to Vietnam and take the jobs assigned to them.

However, they broke their commitments.

Dung said if the four individuals don’t pay back the money as requested by the end of the year, the department will advise the provincial people’s committee to take the cases to court.

In November 2019, the department released a decision asking individuals to pay twice as much as the amount used to fund their study overseas.

The decision clearly says that the individuals have to pay back the money within two years and pay in 10 installments. Each installment is one-tenth of total expenses at minimum.

By April 13, these individuals still had not paid back all the money per the decision of the Department of Home Affairs. They had paid VND2.78 billion out of the total VND9.8 billion they are obligated to pay.

On May 29, 2012, the Quang Ngai provincial People’s Committee released Decision 89 on sending some individuals to overseas training courses as part of a project on producing personnel with master’s and doctoral degrees and attracting highly qualified staff in the 2011-2015 period with a vision until 2020.

HCMC had two imported cases, including a woman residing in Nghe An Province that returned to the country from Germany on Flight VN10 on April 26 and an Indian expert flying to Vietnam on Flight EK392 on April 13. They were immediately quarantined after arriving at the Tan Son Nhat International Airport and are being treated at Cu Chi Field Hospital.

One imported case was reported in Tay Ninh Province. The woman, who resides in Dau Tieng District, Binh Duong Province, entered the country through the Moc Bai Border Gate on April 28. The patient has been sent to Ben Cau District Medical Center for treatment.

Two returnees from the Philippines became the latest Covid-19 cases in Soc Trang Province. They flew back to Vietnam on Flight QH9353 on April 28 and are undergoing treatment at April 30 Hospital.

Two of the four new domestic transmissions were detected in Ha Nam Province. They had close contact with the 2,908th and 2,899th patients. Both of them are being treated at Ha Nam Province General Hospital.

Two other locally transmitted cases were reported in Hanoi. They are workers of Bac Thang Long Industrial Zone and had close contact with the 2,911th patients. They are undergoing treatment at the National Hospital for Tropical Diseases. 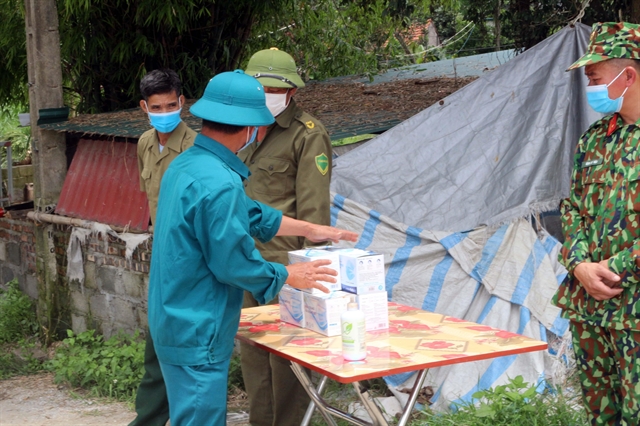 HÀ NỘI — Fourteen people were confirmed as positive for COVID-19 on Saturday evening, including three domestic infections in Hà Nam Province and 11 imported cases that have been quarantined.

The three new patients in Hà Nam are members of a family in Thọ Lão Town, Đạo Lý Commune, Lý Nhân District, who had contact with the 28-year-old male patient that came back from Japan (known as Patient 2899).

One of them, a 28-year-old man, had direct contact with Patient 2899, and the other two are his wife and grandfather.

All three patients are being treated at the National Hospital for Tropical Diseases in Đông Anh District.

All 352 households in Thọ Lão Town, with 1,166 residents, are being tested for COVID-19. Four checkpoints have been set up in the town and four others in the neighbouring Quan Nhân Town.

The Hà Nam People’s Committee has decided to close all schools in the province until May 9. Students will conduct online learning until further notice.

So far 10 people have been confirmed positive for COVID-19 in Hà Nam, including Patient 2899.

Of the 11 imported cases reported on Saturday, two are in Đà Nẵng, three in HCM City, three in Hà Tĩnh, and three in Quảng Ninh.

They were all taken into quarantine upon arrival in Việt Nam from Japan, UAE, Canada and Romania during April 13-29.

Thirty-three patients have also been declared recovered on Saturday night.