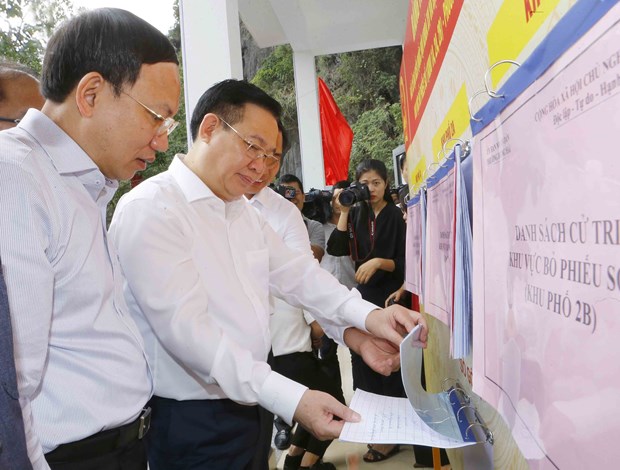 Quang Ninh (VNA) – National Assembly (NA) Chairman Vuong Dinh Hue on April 14 examined preparations for the elections of deputies to the 15th legislature and members of all-level People’s Councils for 2021-2026 in the northern coastal province of Quang Ninh.

Talking to local voters, Hue, who is also Chairman of the National Election Council (NEC), highlighted the important role of them in selecting NA deputies and People’s Councils members and asked them to make wise choices.

He and a delegation of the NA Standing Committee and the NEC also held an online working session with election committees at provincial and district levels. 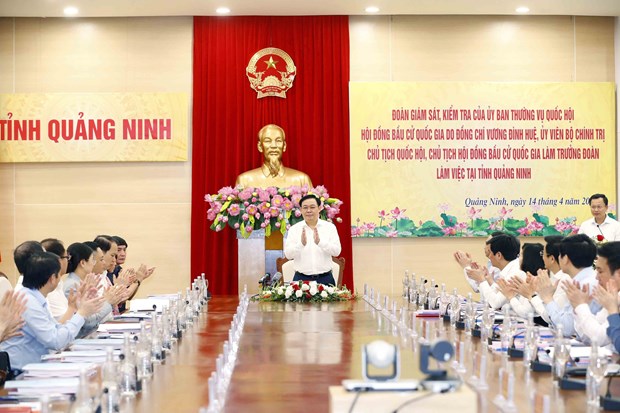 At the working session (Photo: VNA)

As heard at the event, Quang Ninh will hold the third political consultative conference at provincial level on April 16, and those at district and commune levels before April 18.

To date, the lists of constituents have been publicly posted in 177 communes, wards and towns as well as in 1,438 constituencies for voters to check.

After hearing reports at the function, the NA Chairman commended Quang Ninh’s preparations of the elections. He underscored that the elections must be held in line with regulations and bring into full play the people’s right to mastery, with publicity, transparency, and absolute safety ensured in all circumstances for people to exercise their citizens’ rights.

He suggested Quang Ninh continue to review and update the lists of constituents in accordance with the law to ensure citizens’ rights according to the Constitution.

Hue expressed his belief that the province will successfully host the elections./.

The arrest was made on March 28 while the four Chinese citizens was travelling by car on National Highway 18A in Cong Hoa commune of Cam Pha City.

Searching the vehicle, the police found the four Chinese suspects had not brought with them any legal immigration papers.

The Chinese nationals confessed that they had planned to enter Vietnam and then travel to Cambodia for employment.

The police moved swiftly to place the group into quarantine in an effort to prevent the possible spread of the novel coronavirus (COVID-19). In addition, the Chinese nationals were also fined VND4 million each.

CAN THO – Vietnam will face tough competition over shrimp exports from rivals such as Ecuador, India and Indonesia in the next three to five years if the shrimp farming and processing technology is not improved.

Speaking at the opening ceremony of the VietShrimp Aquaculture International Fair on April 14 in Can Tho City, Le Van Quang, chairman of Minh Phu Seafood Corporation, often referred to as “the shrimp king”, said that over the past few years, despite modern technology applied to shrimp farming, the prices of Vietnamese shrimp had remained uncompetitive compared with those in Ecuador, India and Indonesia. The export price of Vietnam’s shrimp is 30% higher than that of the three countries.

However, the advantage of the technology might gradually fade as Ecuador, India and Indonesia are also improving their technology and can produce value-added products and instant food just like Vietnam.

As such, in the next three to five years, these countries will catch up with Vietnam in terms of the shrimp industry.

Besides, the salary of workers active in the shrimp sector in India is one third of that in Vietnam, resulting in the lower price of its shrimp.

If Vietnam does not improve its technology and adopt new solutions and access methods, the country’s shrimp sector will face fierce competition in the next few years, said Quang.

Nguyen Viet Thang, chairman of the Vietnam Fisheries Society, said that shrimp was the main export product among Vietnam’s seafood, with export revenue reaching US$3.8 billion last year. The shrimp sector has significantly contributed to the growth of Vietnam’s agriculture industry and created jobs for millions of workers in Vietnam, mainly in the Mekong Delta region. 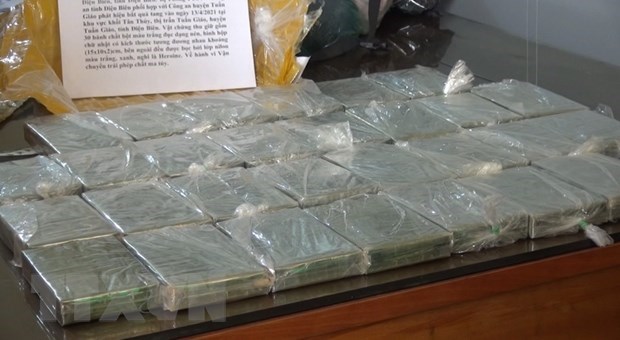 Exhibits of the case at the investigation agency (Photo: VNA)

Dien Bien (VNA) – A man was arrest ed on April 13 in the northern mountainous province of Dien Bien for smuggling 30 bricks of heroin weighing 10.5kg, according to the provincial police.

The provincial drug crime investigation police office in cooperation with police in Tuan Giao and Nam Po districts apprehended Ha Quang Hiep, 43, in Dien Bien district when he was transporting the drugs.

Hiep admitted he had bought the drugs from a person in the Vietnam-Laos border area.

Police also seized a 80cm-long sword and other related exhibits./.

Since 2018, PAPI has been co-funded by the Department of Foreign Affairs and Trade (DFAT) of Australia, the Embassy of Ireland and United Nations Development Programme (UNDP) in Vietnam.

The report, which assessed citizen experiences with national and local government performance in governance, public administration, and public service delivery, showed that the Control of Corruption in the Public Sector dimension has improved significantly each year since 2016.

The dimension on Vertical Accountability Towards Citizens also steadily improved during the 2016-2021 term, mainly because an increasing number of citizens have contacted local officials, in particular village heads and People’s Council delegates.

“New features of the 2020 PAPI Report include insightful findings on the performance of local governments across two terms (2011-2016 and 2016-2021); experience of internal migrants with accessing services in receiving provinces; and voter perception of women in leadership roles,” UNDP Resident Representative in Vietnam Caitlin Wiesen said in her opening remark at the report launch.

“As the Government embarks on a new term, PAPI provides rich and deep datasets on citizens’ perception of local government achievement in each of the 63 provinces and important metrics to review and further improve their performance across eight key dimensions of governance,” she noted.

Analysis in the 2020 PAPI Report shows that citizen engagement and anti-corruption efforts have a positive correlation with Vietnam’s ability to respond to the COVID-19 pandemic.

Australian Ambassador to Vietnam Robyn Mudie, acknowledged an improvement in provincial governance and public administration performance, which may have contributed to Vietnam’s successful response to the COVID-19 pandemic.

Findings from the 2020 PAPI Report show that there is a correlation between good governance and effective pandemic responses, she added.

Nguyen Huu Dung, Vice President of the Central Committee of the Vietnam Fatherland Front said he hope that PAPI will continue to serve as a reliable policy monitoring tool that helps promote government accountability and reforms, thereby furthering modern governance.

Over 14,700 citizens were interviewed for the 2020 PAPI Report. This is the largest number of citizens to participate since the survey was first conducted nationwide in 2011. For the first time, the survey also gathered responses from citizens with temporary residence registration status. Nearly 300 migrants were surveyed in six centrally governed municipalities and provinces (Hanoi, Ho Chi Minh City, Bac Ninh, Da Nang, Dong Nai and Binh Duong).