Such photos, together with infographics, give readers an insight into the NA’s performance in legislation, supervision, decision-making on the country’s major matters, and external affairs.

The book also devotes pages to introducing 494 deputies to the 14th NA, who are grouped in provincial and municipal delegations of NA deputies.

The book has been released at the end of the 14th legislature that created many hallmarks during the five-year tenure.

The 14th NA concluded its 11th session – the last of this tenure – in Hanoi on April 8, with many important contents on reviewing the tenure’s work, building laws, and handling personnel matters completed over the course of 12 days.

Inner sanctum: When did you first start dancing?

In middle school, I started doing K-pop dance covers by myself for fun. When I got to high school and was blown away by its dance club’s performance, I auditioned and won a place. I began taking lessons seriously at that time, and am still dancing.

Inner sanctum: And when did your teaching career get underway?

I joined Last Fire Crew as a freshman at university. It was a small, unknown crew back then. I started teaching and performing with the crew as we gained more recognition. I taught for no pay initially and only started earning a year or two into it. During my last two years at university, I realised I had become much more devoted to dancing than to my translation major. But I decided to finish my degree, and then applied to studios for teaching jobs as my main career, as well as dancing and choreographing.

Inner sanctum: What does a typical working week look like?

I’m pretty much free during the daytime. I teach three classes in the evening, which amounts to six times a week. I also teach private classes during the day. In my free time, I do research and study into the art of dance and practise with the crew three times a week. I try to keep my schedule empty on the weekend for performances and competitions, and I’m often invited to be a judge.

Inner sanctum: What do you like about what you do?

Besides getting to do what I love and am passionate about, I get positive energy from my students. Seeing how hard the beginners try, I feel even more motivated to do it well. I also get to meet people from many different walks of life and age groups, who are all happy and excited to learn how to dance. My advanced class choreographed their final performance recently. It really was wonderful.

Inner sanctum: Did you struggle with teaching at first?

Of course. I didn’t have enough knowledge to be teaching back then. At some point, I didn’t know what to teach next, and had a major growth slump. I believe that every teacher needs to constantly update their knowledge. For dance teachers, it’s important to stay abreast of trends, like teaching TikTok moves, which are well received by the younger audience.

Teaching kids was the most challenging thing I’ve ever done. I was really stressed out and couldn’t help but scream at them. Then I went to training and workshops and picked up the skills I lacked. It turned out that, with kids, you shouldn’t talk too much — you should just do it and show them.

Inner sanctum: Was it easy to approach hip hop culture despite not living abroad? Why is it important to learn about the culture when learning hip hop?

I only seriously looked into it when I started to teach, so I could give the students some basic knowledge. But self-research is not enough. I attended workshops and sought advice from professional international dancers I met at contests, to deepen my knowledge. Hip hop is an imported culture. It’s not our own. To know it well is to respect other people’s culture.

Inner sanctum: I see that you’re really detailed at giving cues. Is there a reason behind that?

As a student, I liked teachers who taught meticulously. Students sign up for classes so they can dance as well as the teacher. So it’s important to show them how to go about it.

Some teachers aren’t certain of what they are teaching, and come across as lost. But when they know what they’re doing, so will the students.

Inner sanctum: How does it feel to win teacher awards?

I’m actually a very competitive person in everything I do. As it was done by voting, I lobbied all of my students to vote for me. The award is also physical proof of a year of hard work as a teacher.

I’ve heard that hip hop abroad is divided into many different styles and crews who tend to compete against each other, since it revolves around the “battle” culture.

In Việt Nam, all of the crews are pretty much united and so free to create. Hip hop is also taught in studios, which gives more people the opportunity to learn and practise. VNS

Despite being born and bred in Nga Sơn, a rural district in the central province of Thanh Hóa famed for its traditional bed mats and other products made of sedge, Trần Doãn Hùng never wanted to follow the craft and becoming involved in a business endeavour relating to the material never even crossed his mind. 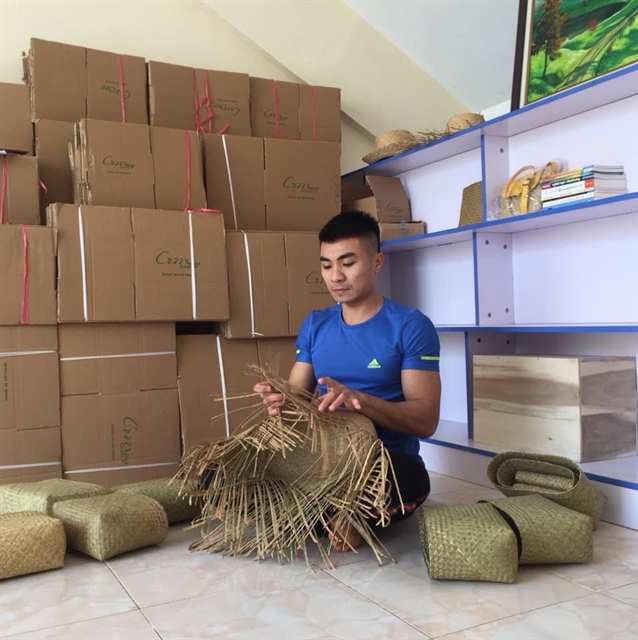 Like many in his village, after graduating from high school he headed to Hà Nội to attend university and then worked for a few years in the capital.

In 2017, he went to work at a resort in the beach city of Nha Trang on Việt Nam’s south-central coast, where by chance he found a new direction in life. A female co-worker showed Hùng her new handbag, made of sedge. Admiring its meticulous weaving, he began to think about his hometown’s famed craft.

“I wondered whether this was something I could do,” the now 28-year-old recalled. “After some restless nights, I decided to quit my job and return home and found a start-up.”

And so it was that in 2018 Hùng founded Cỏ May Craft (Gold Bear Grass Craft).

“Gold Bear grass, the local sedge, is flimsy but durable,” he said in explaining the company name.

“Like many people who were born and bred in a village, when I was living in the city I was always nostalgic for home, with its green pastures and sedge. It’s what brought me back.”

Without knowledge and experience, though, he had to start out from scratch. While studying and learning the craft, he was fortunate enough to meet a helpful craftsman in the central city of Huế who was willing to share his skills and experience.

He also decided, though, to focus on sedge products other than mats, which had been made in his home village for hundreds of years. 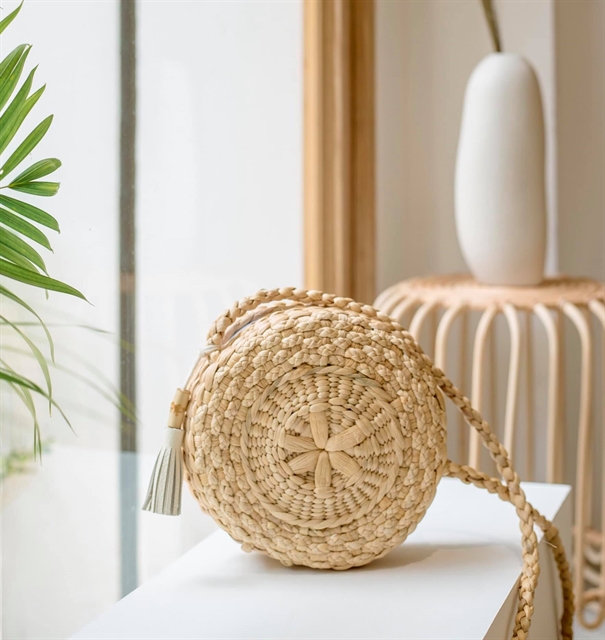 BEST SELLERS: About 1,000 bags from Cỏ May are sold each month on Amazon in the US.

Cỏ May, therefore, specialises in producing women’s handbags. Together with sedge, the company also makes bags using other natural materials such as rattan, bamboo, straw, and hyacinth.

“Customers only accepted our products once they met their requirements in quality and design,” he said. “This why I pay particular attention to such details.”

His bags are rounded out by leather straps, handles or flaps, which add a modern touch. They also come with a removable inner lining, so they can easily be kept clean. 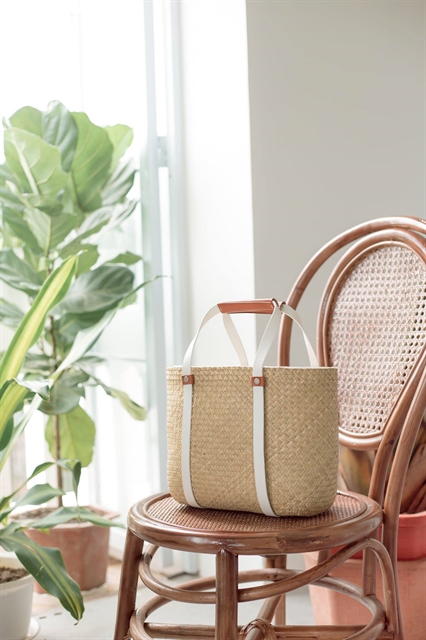 For the young and demanding entrepreneur, product quality isn’t just about durability but also about style and elegance.

“Quality must be seen in every detail,” he said. “The product must look nice, but this doesn’t mean you don’t have to care about every single knot and seam.

CARE & ATTENTION: Every detail is important, according to Hùng.

“Keeping an eye on such details requires that craftsmen be experienced in observation and be self-disciplined.”

Though any number of enterprises have been seriously hit by COVID-19, Cỏ May has come through it all largely unscathed.

“Sales have only been down slightly, as we mostly sell via online platforms,” he said. 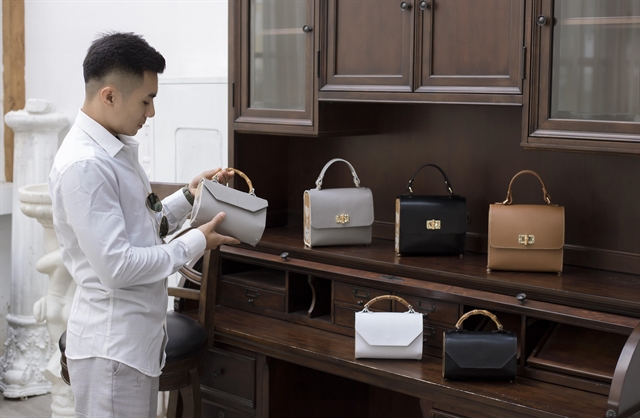 QUALITY IS KEY: Hùng casts his eye over one of his bags at a shop in HCM City.

COVID-19 did, however, give the young businessman a new idea.

“People weren’t able to go out during the pandemic, and instead spent more time at home,” he explained. “So the thought occurred to me: Why we don’t create decorative household items from sedge?” 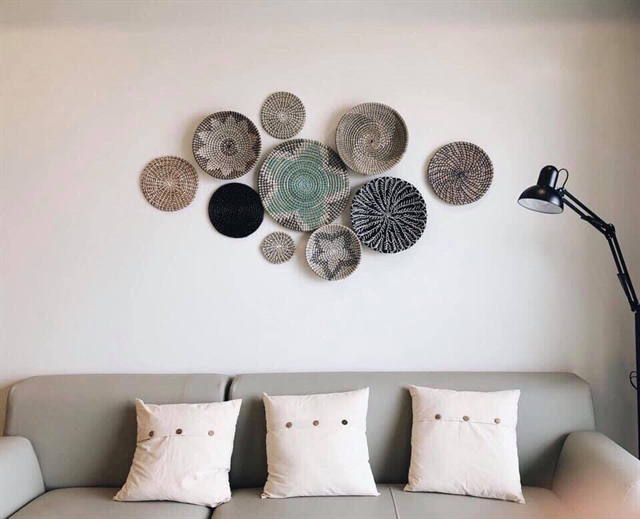 WALL TO WALL: Cỏ May has been selling wall hangings on Amazon since February.

Cỏ May Craft then started to introduce decorative wall hangings made of sedge on Amazon in February and feedback so far has been positive.

To create stable jobs for his fellow villagers, Hùng has begun a training course for a group of women aged 35-55.

“Once they become skilled weavers of our particular products, instead of employing people from elsewhere, such as Kim Sơn in Ninh Bình or others from Huế, we can recruit local villagers,” he said.

He feels happy whenever he receives a photo of customers with one of his sedge bags.

“That’s when I realise my products have travelled all over the world,” he said. “I feel proud to have contributed to promoting ‘Made in Việt Nam’ arts and crafts to international customers.”

His ambition continues, with plans to cooperate with Vietnamese fashion brands as well as foreign retailers in creating a new range of items. VNS