During online talks with Vietnamese ambassador to the U.S., Ha Kim Ngoc, on Wednesday, a Texan member of the House of Representatives and founding co-chair of the ASEAN Caucus in Congress, agreed to his suggestion he should work with his government to protect Vietnamese-Americans and also safeguard their right to healthcare, education and social welfare.

Over 2.1 million ethnic Vietnamese live in the U.S., mainly in California.

Ngoc thanked the U.S. for supporting Vietnam and ASEAN in their response to the Covid-19 pandemic.

He wanted it to help Southeast Asian countries, including Vietnam, access Covid-19 vaccines and provide Vietnam with technology and licensing for vaccine production.

Castro assured him he will work closely with the U.S. government on the proposals.

Minister of Health Nguyen Thanh Long has said Vietnam is seeking to acquire Covid-19 vaccines. It wants to secure 150 million doses to cover 70 percent of its population by next year. 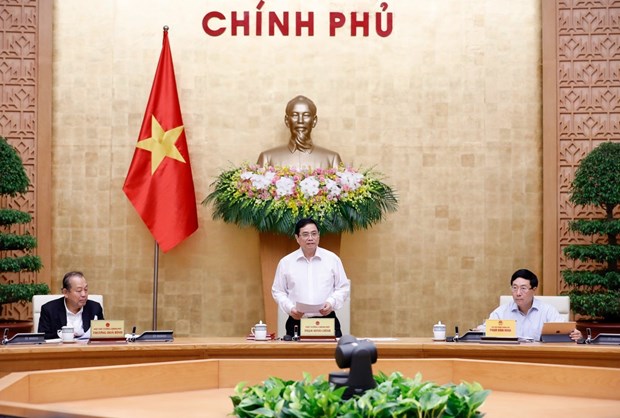 Hanoi (VNA) – Prime Minister Pham Minh Chinh chaired a Government meeting on April 15 to launch tasks for the time ahead.

This is the first Government meeting since new Cabinet members were elected at the 11th session of the 14th National Assembly earlier this month.

During the day-long event, participants are discussing the Government’s action plan to implement the resolution of the 13th National Party Congress, the Government’s working regulations, the disbursement of public investment, the COVID-19 prevention and control, and the COVID-19 vaccination.

The preparations for the elections of deputies to the 15th National Assembly and all-level People’s Councils for 2021-2026, along with the organisation of the national high school examinations, are also under consideration./.

Sexual violence in conflict becomes more serious in the face of Covid-19.

Conflict-related sexual violence became thorny at an open debate of the UN Security Council (UNSC) on April 14 as all participants took it a critical opportunity to take stock of the issue in order to eradicate the scourge of it.

The open debate, which was hosted by Vietnam, the UNSC President for the month of April, drew attention to the chronic underreporting of wartime sexual violence, especially at a time being compounded by Covid-19 containment measures.

The participants thanked Vietnam for keeping this important topic on the agenda of the Council.

Ambassador Dang Dinh Quy, Permanent Representative of Vietnam to the United Nations said the victims should be assisted to access psychological, medical, training and legal services, integrate into the community and seek livelihood sources.

He emphasized the need to take a comprehensive approach to the problem, noting the prevention and full and equal participation of women in decision-making and peace processes, much-needed development assistance, capacity-building, technical support and training.

Meanwhile, UN Under-Secretary-General Pramila Patten, Special Representative of the Secretary-General on Sexual Violence in Conflict, stressed the need of prevention, saying that “prevention is the best and only cure” to stem the multiple, devastating and enduring consequences faced by survivors of sexual violence in conflict, especially as a brutal tactic of war.

Citing over 2,500 UN-verified cases of conflict-related sexual violence in 18 countries last year alone, Patten said there was a “chasm between resolutions and reality”.

She mentioned the long litany of battles fought on the bodies of women and girls in Bosnia, Rwanda, Iraq, Syria and other places to remind others of what they did to honor their commitments to solving the problem.

The Delegation of the EU to UN said they owe this to all victims and survivors of conflict-related sexual violence who expect us to move urgently from commitments to action.

This thorny issue was mentioned one year ago by the UN Secretary General who called for a cessation of violence both on battlefields and in homes.

The UN latest report shows that sexual and gender-based violence has spiked globally during the Covid-19 crisis and that conflict-related sexual violence remains a cruel and rampant tactic of war, torture, terror, and political repression.

Representatives of the countries in the Council expressed concerns about the persisting threat and occurrence of sexual violence in conflict in many countries and called on the international community to do more and better to prevent these crimes and human rights violations, stop impunity and support the survivors and their families including children born out of rape.

Conducted every 10 years, the survey was a joint effort between the NIN and the Ministry of Planning and Investment’s General Statistics Office, with support from many international organizations.

Deputy Health Minister Do Xuan Tuyen said the survey is the largest of its kind on a nationwide scale and involved 22,400 households in 25 cities and provinces representing six ecological areas. It collected anthropometrical data as well as those on micro-nutrients, individual food portions, food security, and food hygiene and safety.

He added that the survey reveals the overall landscape of nutritional intake in Vietnam, progress made over the past decade, and the challenges in the time to come.

Malnutrition is still too common around the country, particularly in disadvantaged and ethnic minority areas. Excessive weight and obesity are rising in both urban and rural areas and among people of different ages, leading to an uncontrollable rise in non-communicable diseases relating to diet. Besides, there remain problems in quality and safety of food consumed by people in daily life.

The use of micro-nutrients and the rate of breastfeeding in the first six months of a new-born’s life improved significantly, from 19.6 percent in 2010 to 45.4 percent in 2020. The figure was 55.7 percent in urban areas, 40.3 percent in rural areas, and 42.7 percent in mountainous areas.

Up to 35.8 percent of respondents possessed good knowledge on food safety, while 55.6 percent had average knowledge and 8 percent low knowledge. The rate of people accessing official information on food safety has doubled since the previous survey in 2010.

Vietnamese also consumes more vegetable and fruits, averaging 231 grams and 140.7 grams  per person a day respectively compared to 190.4 grams and 60.9 grams in 2010. However, the consumption only reached 66.4-77.4 percent of the recommended amount. The daily consumption of meat rose rapidly to 136.4 grams per person from 84.0 grams 10 years ago, while consumption of rice decreased.

AppWorks is known for its investments in leading Southeast Asian companies such as Lalamove, Carousell, and ShopBack. Other investors that joined the round include Singapore-based Huat Ventures and biotech entrepreneur David Ma, according to TechinAsia .

Established in January 2020, Docosan is an app for searching and booking appointments online with doctors 24/7, checking price lists and reviews by real patients. Docosan has helped 50,000 patients in Vietnam book appointments with physicians across 35 specialties within less than a year of operations.

“Many clinics are frustrated after spending large amounts on social media marketing because these networks’ vast, opaque user bases are difficult to harness to reach new patients,” Docosan’s CEO and co-founder Beth Ann Lopez said in a press statement.

“Docosan’s proprietary booking software provides doctors an easier way to manage bookings compared to the crowded waiting rooms, which people are increasingly wary of amid the pandemic,” she added.

In press statement, AppWorks partner Andy Tsai said, “We noticed Docosan’s potential early on because of its participation in the AppWorks Accelerator. Docosan’s founders demonstrated strong experience and dedication to the healthcare issues in the region. We are proud to be supporting Docosan’s vision of better healthcare access for all.”

The potential for healthtech startups is huge as the healthcare market will double in the next 7-10 years. Digital healthcare makes up less than 1 per cent of the total market size currently, a figure which is projected to skyrocket. Many healthtech startups are ramping up operations in Vietnam including eDoctor, Zoop Care, Doctor Anywhere, MedPro, and Jio Health.

A report by Fitch Solutions identified great promise in digital healthcare in light of the current challenges faced by public hospitals in Vietnam and the COVID-19 pandemic. Internet access is widespread and the country has seen rapid development in 4G and 5G mobile communications technologies. Building on these foundations, the government of Vietnam is driving a digitalisation agenda in hospitals and clinics across the country. Smart solutions are being strongly encouraged that utilise big data, AI, cloud computing, and mobile technology to help alleviate Vietnam’s overcrowded public hospitals and increase the quality of care.

All of the new cases are Vietnamese who were sent to quarantine in the Mekong Delta province of Kien Giang and the central province of Khanh Hoa right upon their arrival.

The ministry said 2,445 COVID-19 patients have been given the all-clear, and the death toll remains at 35.

Among patients still under treatment, 16 have tested negative for the novel coronavirus once, 18 twice and 18 thrice.

A total 38,743 people who had close contact with COVID-19 patients or arrived from pandemic-hit areas are being quarantined across the country.

The ministry reported that an additional 1,767 people were vaccinated against the coronavirus on April 14, raising the total number of vaccinated people in the country to 62,028, mainly frontline medical workers, and members of community-based anti-COVID-19 groups and the steering committees for COVID-19 prevention and control in 19 cities and provinces.