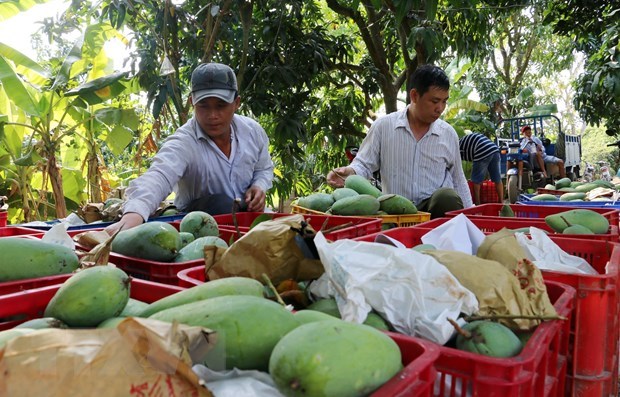 Hanoi (VNA) – Import-export value of agro-forestry-fisheries products hit nearly 11 billion USD in the first two months of 2021, resulting in 1.37 billion USD in trade surplus, up 28.4 percent year on year, according to the Ministry of Agriculture and Rural Development (MARD).

The ministry reported that a year-on-year rise was recorded in the export value of many products such as rubber , tea , cashew, vegetables and fruit and forestry products.

In the first two months of this year, the US remained the largest market of Vietnamese agro-forestry-fisheries products with 2.04 billion USD, up 57.3 percent year on year and accounting for 33.05 percent of the market share. It was followed by China, ASEAN, the EU, Japan and the Republic of Korea.

The export value of aquatic products reached 405 million USD in February, pushing the figure in the first two months of 2021 to over 1 billion USD, up 2.2 percent over the same period last year, reported the Vietnam Association of Seafood Exporters and Producers (VASEP).

According to the association, exports of tra fish saw positive signals since the beginning of this year after consecutive drops in 2020, with a 1.7 percent rise in the first two months of 2021 to 214 million USD.

In January, excepting for China and the EU, upturn was seen in the majority of markets of Vietnamese tra fish, including the US with 51 percent, Mexico 73 percent, Australia 45 percent and Canada 42 percent. Other markets such as Brazil, Colombia, the UK and Russia also experienced an increase of 37-129 percent.

Meanwhile, shrimp export in February was estimated at 160 million USD, down 18 percent year on year, resulting in over 380 million USD in the first two months of 2021, a slight annual fall of 0.8 percent.

The VASEP said that in the first two months of this year, exports of Vietnamese aquatic products were affected by demands of markets amidst COVID-19 pandemic.

The association forecast that aquatic export value in March will reach about 640 million USD, up 1.5 percent over the same period last year thanks to high demand in the US, EU and members of the Comprehensive and Progressive Agreement for Trans-Pacific Partnership (CPTPP)./.

Scheduled to begin at the upcoming Southern Liberation and National Reunification holiday (April 30), the programme will seek to create new distinctive tourism products so as to enhance the experience of tourists to the city.

The programme is the realisation of the city’s plan to develop its night-time economy and will be piloted from 2021 to 2023.

Da Nang by Night targets foreign tourists from key markets such as China, the Republic of Korea and Southeast Asia, as well as those from potential markets such as Russia, Australia and the US when the Covid-19 pandemic is brought under control and international routes are permitted to resume.

It will also aim to attract domestic tourists from places with direct flights to Da Nang, such as Hanoi, Ho Chi Minh City, Can Tho, the Central Highlands and neighbouring provinces.

The programme will include lighting shows, night-time tourism and service activities at selected places of interest, the night beach of My An, and cultural events along the Han River such as street dances, music, food and traditional arts.

There will also be night tours on the Han River and between Da Nang and Hoi An.

As part of the programme, there will be happy hours where tourists can enjoy special discounts at local shops, supermarkets, shopping centres and restaurants in order to boost demand after 10pm.