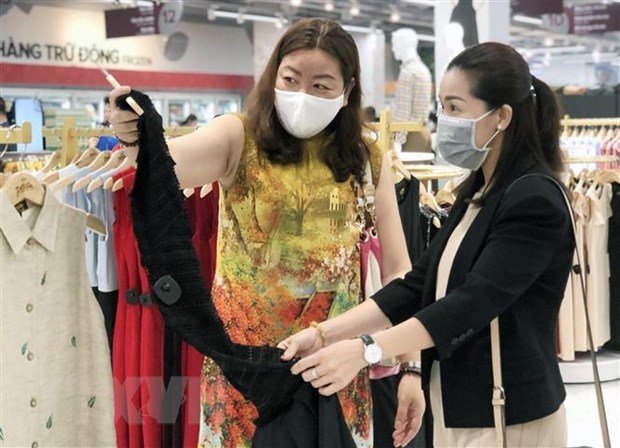 Hanoi (VNA) – An influx of foreign investment, the rise of e-commerce, and the sound containment of COVID-19 are believed to have driven growth in Ho Chi Minh City ’s retail sector despite the considerable impact of the pandemic, according to the Cong Thuong (Industry & Trade) newspaper.

Total retail and service revenue in the southern economic hub has bounced back compared to the same period last year, though has yet to return to pre-pandemic levels.

The city recorded more than 366.23 trillion VND (15.8 billion USD) in total retail and service revenue between January and April, up 7.9 percent year-on-year. Retail sales of key commodities such as food, garments, household appliances, and automobiles rose some 10 percent year-on-year.

Despite certain difficulties regarding space supply, its stable and diverse retail network and booming e-commerce have become growth drivers for the service sector in the city and the country as a whole.

Tu Thi Hong An, Director of Commercial Leasing at Savills Vietnam, said the pandemic has created numerous difficulties for retailers, noting that a number of businesses have been forced to shut down or scale down their operations, but added that this is normal.

In early March, Uniqlo opened its fourth shop in HCM City, at the Van Hanh Mall in District 10, while Decathlon opened its second store at the Thao Dien Mega Mall in Thu Duc city. Other international fashion brands, from the mid- to high-end segments, such as Balenciaga and Tiffany & Co, are also planning to make inroads into Vietnam, the newspaper reported.

An predicted that in the time ahead, clothing and accessory brands will continue to be the main lessees of retail space at shopping centres in the city’s outlying areas. In populous areas, meanwhile, food and convenience stores are expected to develop further.

Total retail sales will continue to rise as more e-commerce and international brands enter the market, she added.

Echoing this view, Lai Viet Anh, Deputy Director of the Vietnam E-Commerce and Digital Economy Agency at the Ministry of Industry and Trade, said the ongoing growth in e-commerce will continue to support the retail market, especially in major cities like Hanoi and HCM City.

With 67.6 points, HCM City retained its leading position in the Vietnam E-Business Index 2021, released by the Vietnam E-Commerce Association (VECOM), followed by Hanoi with 55.7 points.

The Trading Economics platform, meanwhile, forecast that retail sales in Vietnam will grow 11 percent this year, outpacing other Southeast Asian countries, and household spending up 9.6 percent, which will contribute to growth in the retail market./.