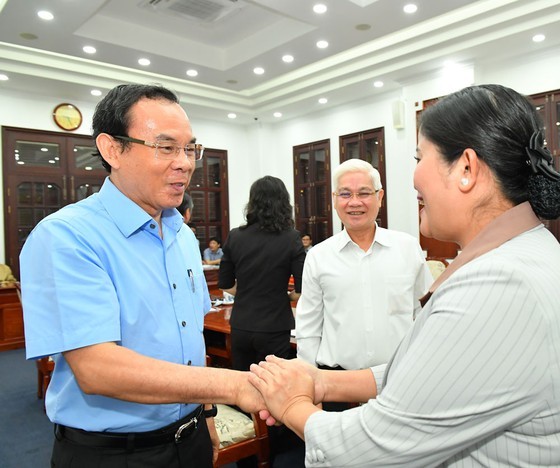 Secretary of the HCMC Party’s Committee, Nguyen Van Nen and Chairwoman of the Binh Phuoc Province People’s Committee, Tran Tue Hien
Speaking at the meeting, Director of the municipal Department of Transport Tran Quang Lam said that the HCMC-Thu Dau Mot-Chon Thanh expressway is 73 km long, connecting HCMC and the Southern provinces of Binh Duong and Binh Phuoc. The stretch in HCMC is 2km long, expected to link up to Ring Road No.2 at Go Dua Intersection in Thu Duc City. The section running through Binh Duong Province is 60km long while the section running through Binh Phuoc Province is 11km long.
The authorities of  the city and the province should continue to carry out virtual field trips based on the localities and complete a study report on the total investment capital and investment modes to submit to ministries of Transport, and Planning and Investment before reporting to the Prime Minister, he added.
After the discussion, leaders of HCMC and Binh Phuoc Province came to an agreement on soon implementing the construction project of the HCMC-Thu Dau Mot-Chon Thanh expressway that has been approved by the Prime Minister.
Binh Phuoc Province will take responsibility for carrying out the project; organizing working sessions on investment modes, capital resources, building the overall plan for the project with ministries, departments and localities.
On this occasion, the two sides agreed to establish a steering committee for the HCMC-Thu Dau Mot-Chon Thanh expressway project.
Secretary of the HCMC Party’s Committee, Nguyen Van Nen highly appreciated the co-organization of the meeting, aiming at enhancing the cooperation in planning and executing the project at the earliest.
HCMC-Thu Dau Mot-Chon Thanh is an important highway to ensure the transport connectivity of the main economic centers and create the driving force for the socio-economic development of HCMC, provinces and the region, he said.
The People’s Committees of HCMC, Binh Duong and Binh Phuoc provinces should closely cooperate to complete procedures and define the total capital investment. Project roles and responsibilities must be clearly defined, assigned and allocated to ensure successful results. The procedures of the project must finish to submit it on time to the 15th National Assembly, term 2021-2025, the city’s leader added.
Last December, consulting firms completed the pre-feasibility study report on the expressway project, HCMC-Thu Dau Mot-Chon Thanh connecting HCMC and the Southern province of Binh Phuoc to submit to competent agencies for approval.
According to the development plan on high speed road network of Vietnam to 2020, orientation to 2030 approved by the Prime Minister, the HCMC-Thu Dau Mot-Chon Thanh expressway is 73 km long with 6-8 lanes.
As proposed, the expressway will be built under the public–private partnership (PPP) and the build–operate–transfer (BOT) investment modes. The project’s construction is expected to be kicked off before 2030. 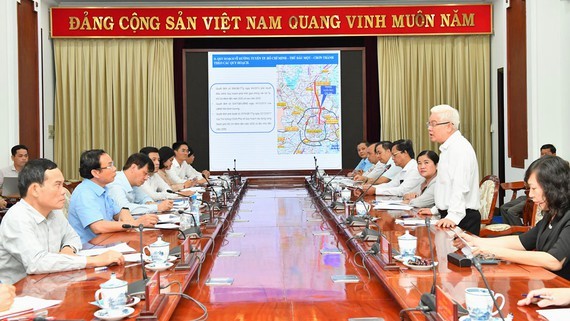 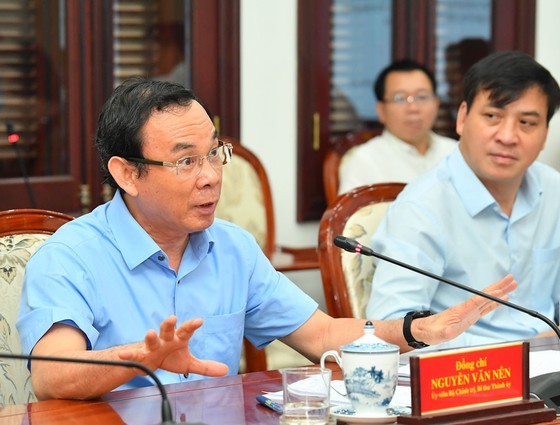 Secretary of the HCMC Party’s Committee, Nguyen Van Nen speaks at the event. 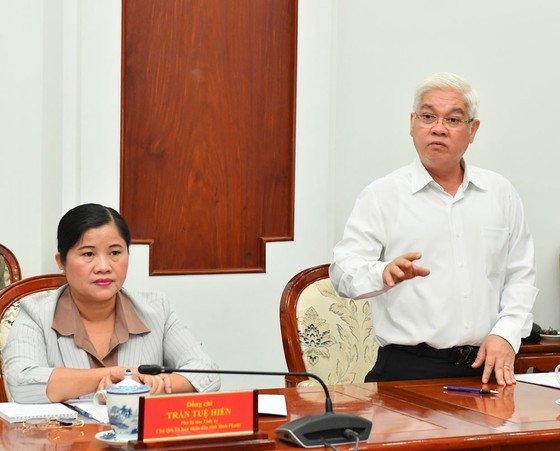 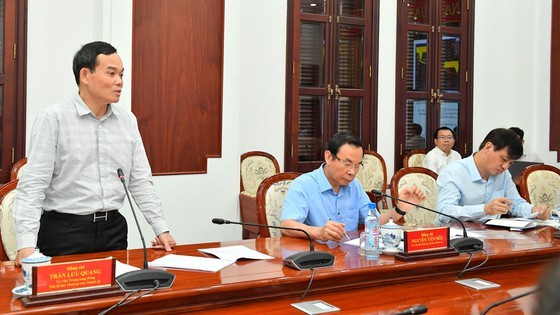 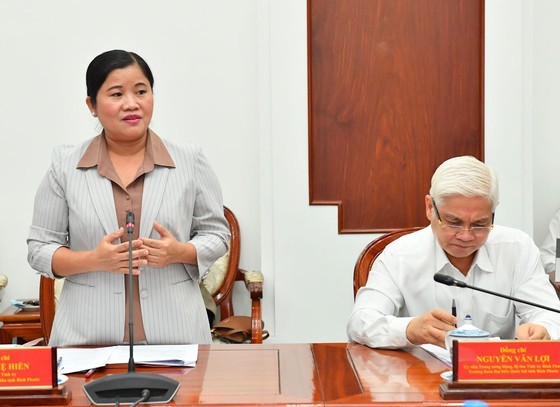 Leaders in Ho Chi Minh City and the southern province of Binh Phuoc on Thursday agreed on the construction of a VND36 trillion (US$1.5 billion) expressway linking the two localities.

The investment capital is estimated at VND36 trillion ($1.5 billion), of which 47 percent is expected to be funded by the state budget.

The expressway will consist of three main sections.

The second section spans 57 kilometers in Binh Duong Province, including 28 kilometers of elevated roads and 10 overpasses, which will cost VND30 trillion ($1.29 billion).

The third section is about 11.5 kilometers in Binh Phuoc Province, costing VND3 trillion ($130 million). This section will be designed with six lanes to facilitate the connection with the Dak Nong – Chon Thanh Expressway.

During a working session in January, Prime Minister Nguyen Xuan Phuc assigned Binh Phuoc People’s Committee to coordinate with relevant units to work on capital arrangement and construction format of the project.

The premier also requested the Ministry of Planning and Investment and related sides to map out a plan on channeling state budget into the implementation of the project.

Authorities in Ho Chi Minh City, Binh Duong, and Binh Phuoc will also submit their proposals regarding the construction of the expressway.

Once approved, the expressway is expected to be built within the 2021-30 period under the Public-Private Partnership (PPP) form.

Accordingly, the North-South Expressway to the East, the Eastern Expressway of Ho Chi Minh Road, Bien Hoa – Vung Tau Expressway, Expressway connecting to Huu Nghi Border Gate in Lang Son Province and Ring Roads of Hanoi and Ho Chi Minh City have not been implemented.
According to Minister of Transport Mr. Nguyen Van The, the delay was due to the slow site clearance progress.

Based on the actual situation, the transport sector set the target up to 2030 concentrating on construction of inter-regional expressway projects connecting to sea ports, air-ports, striving to complete 5,000 kilometers of expressway in 2030 and more than 9,000 kilometers in 2050.

To speed up the progress, Minister Nguyen Van The said that there should be a breakthrough mechanism for expressway infrastructure development in the coming time, a breakthrough in the way of implementing, selecting a portfolio, and submitting to the Government for approval of the whole site clearance to form the entire investment project of 5,000 kilometers of the expressway.

According to the Transport Engineering Construction and Quality Management Bureau, 13 localities where 11 sections of the expressway are now being built have handed over 630 kilometers out of the 652 km required.

The expressway will run a total of 1,799 kilometers between Hanoi and the southern city of Can Tho parallel to National Highway 1A. Over 300 km of it have been completed.

The delay in acquiring land is due to tardy construction of resettlement areas and relocation of infrastructure like power and telecommunications lines and water pipes.

Of 111 resettlement areas that need to be built, 91 are completed, 19 are under construction and one is still awaiting approval.

Once completed, the expressway is expected to reduce pressure on the overloaded National Highway 1A.

A truck has been caught on CCTV traveling in reverse along an expressway linking Hanoi and the northern city of Hai Phong.

The traffic police division under the Ministry of Public Security confirmed on Thursday it had received that CCTV footage from the management of Hanoi – Hai Phong Expressway.

In the video clip, the truck was running in reverse to reach the intersection between the expressway and National Highway No. 10 at around 10:00 am the same day.

The action posed high risks of accidents as other vehicles were traveling at very high speed on the expressway, while it was also foggy at the time, said the traffic police division.

Officers have contacted the owner of the truck and identified the driver.

The truck driver said it was his first time traveling along the route.

According to current regulations, backing a vehicle on an expressway is punishable by a fine worth VND16-18 million (US$692-778) and five- to seven-month revocation of the driver’s license.

In connecting the delta’s economic center with the southernmost tip of the country, the expressway will pass through provinces of Vinh Long, Hau Giang, Soc Trang, and Bac Lieu, boosting connectivity in Vietnam’s agriculture hub.

During the first phase of the project that is estimated to cost VND37.6 trillion ($1.63 billion), the expressway will be designed with two lanes that allow vehicles to travel at 80 kilometers per hour. In the second phase that would cost VND64 trillion, it would be upgraded into four lanes, allowing speeds of up to 100 km an hour.

Construction is set to be completed in 2025.

The first section, between Can Tho City and Bac Lieu Province, will be built using public funds, while the second, from Bac Lieu to the southernmost province of Ca Mau, will be built under the public-private-partnership (PPP) model.

The expressway is among several planned or being constructed in the Mekong Delta, home to Can Tho City and 12 provinces with over 17 million residents. The region is one of Vietnam’s most important economic zones, contributing 17.7 percent of the entire nation’s GDP.

In 2019, the region contributed 54 percent of rice, 70 percent of seafood and 60 percent of fruit output for the whole country.

Lawmakers and officials have been saying for years that the lack of infrastructural connectivity between Ho Chi Minh City and numerous Mekong Delta provinces was proving to be a development bottleneck for the region.