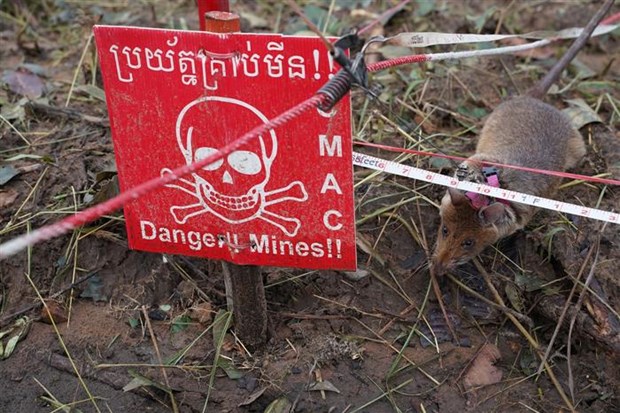 A mine detection rat sniffs for landmines in an area in Preah Vihear province, Cambodia.(Photo: Reuters)
Phnom Penh (VNA) – Cambodia has deployed a new team of mine sniffing rats to replace the “retired” ones in an effort to boost de-mining operations in the country.
The team comprises 20 African giant pouched rats which were imported from Tanzania and have undergone intense training.
According to APOPO – an international organisation that specialises in using rats to detect landmines and tuberculosis , among the “retired” mine detection rats, there is Magawa that has found 71 landmines and 38 UXO during its five-year career. In 2020, it was awarded a gold medal for “lifesaving bravery and devotion to duty” from Britain’s People’s Dispensary for Sick Animals.
So Malen, a handler said these rats have extraordinary sense of smell that guarantees results, and what has set Magawa apart from other rats is his work speed./.
VNA