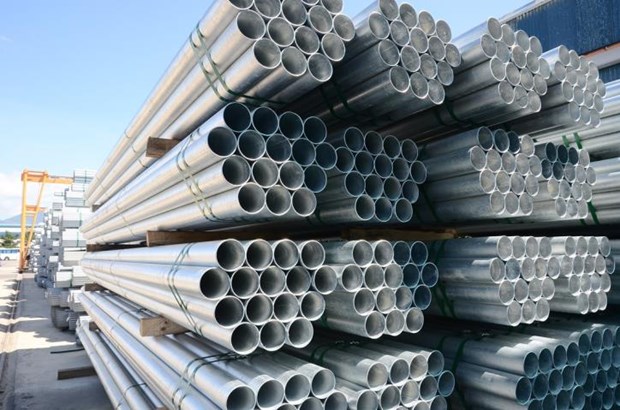 Hanoi (VNA) – Steel manufacturer Hoa Phat Group sold over 184,000 tonnes of steel pipes in the first three months of this year, a 27 percent increase against the same period last year and giving it the lead in market share, with 30.2 percent.

Nearly 7,000 tonnes of pipes were shipped to the US, Australia, and Canada during the period, a year-on-year rise of 31 percent.

Sales of its steel sheets, meanwhile, neared 74,000 tonnes in the first quarter, triple the figure posted in the same period last year.

Hoa Phat has to date inked deals to export products to the end of July, primarily to Europe, the US, and Mexico.

Of the figure, steel sheet exports doubled and neared 14,000 tonnes. 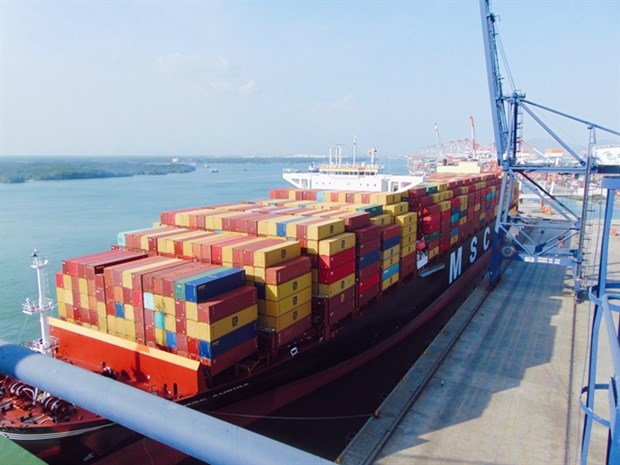 The ship, MSC Auriga, belonging to MSC shipping line offers direct container services to the US.

SP-SSA International Terminal is a joint venture established in 2006 by SSA Marine of Seattle in the US and two Vietnamese companies, Vinalines and Saigon Port.

Located in the downstream area of the Cai Mep River, it was built to handle large container vessels and is equipped with modern container handling equipment, including the largest STS cranes in Vietnam, a land area of 60 hectares and 600 metres of berth length.

It also has 445 metres of specialised berth for handling barges from inland container depots and ports in Ho Chi Minh City, Dong Nai and Binh Duong.

The Cai Mep – Thi Vai port complex is a group of deep-water seaports with a combined length of over 20km, which account for over 30 percent of the country’s exports by containers, which are expected to be a trade gateway in the south.

Gemalink is the biggest seaport in the Cai Mep-Thi Vai complex and one of the 19 big seaports in the world which is capable of receiving the world’s biggest cruise liners. Built at a total investment of 520 million USD in two phases, the port is equipped with ship-to-shore cranes designed and manufactured in Vietnam. When the first phase of the port is inaugurated in May, it will run at least 80 percent of its designed capacity this year and at full capacity from next year./.

Hanoi polytechnic lecturer has contributed to the Italian research on the fields by writing many articles published in prestigious specialized journals.

Associate Professor Ta Hai Tung, a lecturer at the Hanoi University of Science and Technology, has received the Italian Order of the Star, the noblest title bestowed on non-Italians for promoting sci-tech connections between Vietnam and Italy.

Italian Ambassador Antonio Alessandro on April 14 awarded the order of merit to Tung, head of the International Research Institute for Multimedia, Information, Communication and Applications (MICA) under the Hanoi University of Science and Technology.

The order, granted by Italian President Sergio Mattarella, is the noblest and most important reward, recognizing the contributions of non-Italian to the relations between Italy and other countries, Ambassador Antonio said.

He added that Tung obtained his master from the Polytechnic University of Turin, Italy before securing his PhD in Electronics and Telecommunications from the school in 2010.

Tung made continuous efforts during his master’s studies in “Positioning and related applications” and his doctorate’s research in Electronics and Telecommunication, the ambassador noted.

“Tung has also contributed to the Italian research on the fields by writing many articles published in prestigious specialized journals,” said the ambassador.

Tung was director of the International Collaboration Center for Research and Development on Satellite Navigation Technology in South East Asia (NAVIS) from 2011 to 2018. NAVIS is an international center specializing in studying and applying satellite navigation technologies.

Under Tung’s leadership, NAVIS center soon became an excellent research institute in Vietnam and Southeast Asia in the field of global satellite positioning.

Tung has contributed greatly to positioning technology transfer in Vietnam, focusing on the European Galileo technology promotion and the cooperation with leading Italian companies in this field.

Tung was also the Co-Chairman of the Asian Positioning Organization – the largest satellite-based positioning organization in Asia and Oceania (from 2016 to 2019). He was awarded the Golden Globe Awards in 2013 by the Central Youth Union and the Ministry of Science and Technology.

“We highly value Tung’s contributions in promoting international cooperation in science. It is a base to promote sustainable development and improve life quality in Vietnam and in any country that Tung has cooperation projects with,” said Ambassador Alessandro.

For his part, Tung said living, studying and working in Italy gave him the opportunity to appreciate and promote cooperation between the two countries in many fields, especially culture and education.

“When returning to Vietnam, my partners and I have done our best to promote cooperation between the two nations in high-level scientific research and training for mutual benefit,” Tung said.