The accident, in which a 200,000-tonne container vessel became wedged diagonally across the canal during a sandstorm, blocked a crucial shipping artery used for 10 percent or more of world trade.

But fears that it could take weeks to refloat the behemoth proved unfounded.

Six days into the crisis, after major operations involving a flotilla of tug boats and excavators dredging up sand, the Japanese-owned MV Ever Given was freed and taken to an unobtrusive anchorage.

“Anywhere else in the world, this operation would have taken three months,” boasted canal chief Osama Rabie, adding that “99 percent” of personnel working at the scene had been Egyptian.

Visibly relieved, he said he had been told by President Abdel Fattah Al-Sisi that “the reputation of Egypt rested on my shoulders”.

Sisi, who deposed Islamist president Mohamed Morsi in 2013, spent over $8 billion to widen and add a 35 kilometre (21 mile) second lane on a northern segment of the canal amid much pomp six years ago.

The country has emerged from the short crisis with credit, said Tony Munoz, editor-in-chief at trade publication Maritime Executive.

However, Munoz also pointed to the significant role played by the international salvage specialists who worked alongside Egyptian personnel.

Munoz cited in particular the crisis management expertise provided by Resolve Marine’s Captain Nick Sloane, who was also salvage master for the clear-up of the 2012 Costa Concordia cruise ship disaster off Italy.

“There was bound to be some domestic flag-waving about the success of the refloating… but it does not diminish the Dutch involvement,” said Angus Blair of the American University in Cairo, referring to Dutch firm Smit Salvage.

Both Blair and Munoz saw little or no impact from the canal blockage on Egypt’s share of shipping cargo traffic over the medium-term.

“In essence, this was only a traffic accident — (albeit) a big one,” said Blair.

“Airports have accidents, but within hours to a day the airport will reopen and then there is an investigation to determine the cause,” he added. “So, I do not think there is damage to Egypt’s reputation”.

Munoz noted that “the alternative of sailing around Africa is not reasonable”, emphasising that the whole “purpose of these mega-boxships is to reduce port calls and operational costs”.

But Yezid Sayigh, a senior fellow at the Carnegie Middle East Center, noted that “when oil prices drop below a certain level, the longer route around the Cape of Good Hope becomes cheaper”, referring to the route around southern Africa.

An expert on the enormous economic sway of Egypt’s military, Sayigh has long seen the costly 2014-15 expansion of the canal as ill-judged.

In a 2019 study, he noted that “Sisi’s demand that it be completed within one year rather than the three years it was estimated to require” contributed to the cost of the project more than doubling from initial estimates.

The 2014-15 expansion was driven by overly optimistic shipping traffic projections, amid competition for some Asia-Europe cargo traffic from the Panama canal and Arctic shipping route, he told AFP.

But the expansion project had anticipated annual transit fees would hit $13.5 billion by 2023.

Faced with this disappointing balance sheet, even Sisi was quick this week to rule out a costly widening of the southern section of the canal where the Ever Given got stuck.

While the immediate shipping traffic jams should clear before the end of the week, apportioning responsibility for losses suffered by the numerous parties is likely to play out through litigation, according to credit ratings agency DBRS Morningstar.

That could ensure uncomfortable scrutiny of Egypt extends well beyond the canal blockage.

“Egypt has resisted transparency” over a number of incidents, including “the murder of Italian PhD student Giulio Regeni in 2016,” noted Sayigh.

Regeni was researching Egyptian trade unions when he was abducted in January 2016; his mutilated body was found on Cairo’s outskirts, and Italian prosecutors want to put four Egyptian security officers on trial for the killing.

When it comes to the Suez probe, Egyptian authorities “would be well advised to be very transparent in this instance so as to avoid further reputational damage,” Sayigh told AFP.

Archaeologists near Luxor have unearthed just a portion of the “largest” ancient city ever found in Egypt and dating to a golden pharaonic age 3,000 years ago, officials said Saturday.

Famed Egyptologist Zahi Hawass had announced earlier this week the discovery of the “lost golden city”, saying the site was uncovered near Luxor, home of the legendary Valley of the Kings.

“We found one portion of the city only. But the city extends to the west and the north,” Hawass told AFP Saturday ahead of a press conference in the archaeologically rich area.

Betsy Bryan, professor of Egyptian art and archaeology at Johns Hopkins University, had said the find was the “second most important archeological discovery since the tomb of Tutankhamun” nearly a century ago, according to the excavation team’s statement on Thursday.

Items of jewellery have been unearthed, along with coloured pottery vessels, scarab beetle amulets and mud bricks bearing seals of Amenhotep III.

The team began excavations in September between the temples of Ramses III and Amenhotep III near Luxor, some 500 kilometres (300 miles) south of Cairo.

Amenhotep III inherited an empire that stretched from the Euphrates River in modern Iraq and Syria to Sudan and died around 1354 BC, ancient historians say.

He ruled for nearly four decades, a reign known for its opulence and the grandeur of its monuments, including the Colossi of Memnon — two massive stone statues near Luxor that represent him and his wife.

“It’s not only a city — we can see… economic activity, workshops and ovens,” Mostafa Waziri, head of the country’s Supreme Council of Antiquities, said Saturday.

Since the announcement, some scholars have disputed that Hawass and his team have succeeded where others had failed by locating the city.

Egyptologist Tarek Farag posted Friday on Facebook that the area was first excavated more than a century ago by a team from New York’s Metropolitan Museum.

But Waziri dismissed these concerns, saying previous digs had taken place further afield to the south the site.

The Republic of Egypt is located in northern Africa and has a population of 97 million. Since May 2014, President Abdel Fattah el-Sisi’s administration has taken various measures to reform the Egyptian economy, helping to quickly stabilise its performance after years of turmoil following the political events of 2011.

In 2017, the Egyptian economy grew by 4.1% with GDP reaching US$332 billion and GDP per capita at US$3,750. In the first months of 2018, its economy expanded by 5.4%. Egypt has risen to become the largest economy and one of the largest recipients of foreign direct investment in Africa. Egypt’s main economic sectors are tourism, oil, garments, agricultural processing, chemicals and construction.

As a country with a geostrategic role and location in the region, connecting Asia and Africa, Egypt has made a significant contribution to the African Union’s operational budget. Egypt also houses the headquarters of the Arab League and represents the Africa/Arab group for non-permanent membership of the UN Security Council in the 2016-2017 term.

Egypt used to be a pioneer of the national liberation movement during the 1950s and 1960s and is a co-founding member of the Non-Aligned Movement. President el-Sisi is continuing to push Egypt’s “look east” policy, aiming to expand relations with Asian countries, including Vietnam.

We are pleased to witness the ever growing fine traditional cooperation and friendship between Vietnam and Egypt. Egypt was one of the first Arab countries to forge relations with Vietnam. On September 1, 1963, the two countries formally established diplomatic ties. In the same year, Vietnam opened its embassy in Cairo and one year later Egypt opened its embassy in Hanoi.

The fine traditional friendship between the two countries has been marked by historic events, including President Ho Chi Minh’s setting foot in Egypt in 1911 and 1946. In May 2017, the Vietnamese Embassy in Egypt organised a live TV programme on President Ho Chi Minh to be shown by Egypt’s national TV broadcaster.

The fine relationship between the two countries is also marked by mutual visits of high-ranking leaders. Vietnam and Egypt have signed many cooperative agreements in such fields as diplomacy, trade, transport, agriculture and culture.

President Tran Dai Quang’s state visit to Egypt aims to promote cooperation in many fields, especially economic and trade cooperation, opening up the prospect for cooperation between Vietnam and Egypt as well as business opportunities for Vietnamese companies in Africa.

The visit is expected to help lift the multi-faceted cooperation between the two countries to new heights, contributing to peace, stability, cooperation and development in the world.

Events Magazine News posted a commentary produced by journalist Ahmed Hassan detailing the expectations ahead for the new Vietnamese Government.

The article reviews the outstanding performance of the Vietnamese Government during the 2016 to 2021 tenure, highlighting the country’s success in 2020 when overcoming the challenges caused by the global spread of the novel coronavirus (COVID-19) pandemic and maintaining strong economic growth. In doing so, the nation successfully met its dual goal of effectively combating the pandemic whilst simultaneously ensuring socio-economic development.

New Prime Minister Pham Minh Chinh, a Politburo member and member of the 13th Central Party Committee who had previously held many important positions with plenty of leadership experience, will lead the Government in facing future challenges in order to successfully fulfill the strategic goals set for the next five years, according to the article.

The election of both the State President and the Prime Minister by the Vietnamese National Assembly took place with a high rate of approval votes.

This will therefore serve to further promote Vietnamese foreign relations, including forging strong bilateral ties, with a target of trade exchanges exceeding US$1 billion. The article stated the publication’s belief that the new Vietnamese PM will be able to devise economic policies aimed towards the Middle East and Africa, including Egypt.

Meanwhile, many other Arabic-language newspapers based in Egypt, such as the Constitution (Dostor), Today’s Public (algomhorianow), and National Resonance (Sadaelomma), also widely covered the recent election results of the new high-ranking Vietnamese leadership. 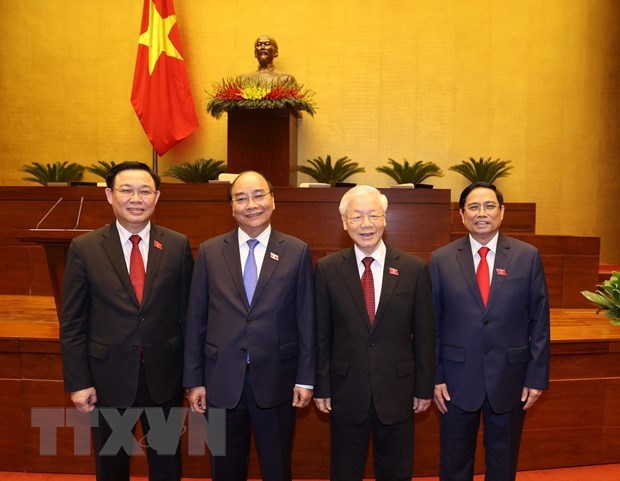 Cairo (VNA) – A number of Egypt ian newspapers on April 5 ran articles on Vietnam’s new leadership which, they said, will contribute to consolidating the relations between the two countries.

They believed that the bilateral relations will be further enhanced in the time ahead, with two-way trade expected to double last year’s figure to 1 billion USD soon.

The same day, Events Magazine News e-newspaper said President Phuc made imprints while serving as PM during the 2016-2020 period.

Author Ahmed Hassan highlighted Vietnam’s achievements last year, saying it is the only country among the six biggest economies in Southeast Asia to post a positive growth rate of 2.19 percent.

Hassan also expressed his belief that newly-elected PM Chinh will lead the Vietnam ese Government to overcome difficulties and challenges so as to outstandingly complete strategic targets set for the next five years.

Vietnam’s senior leaders have demonstrated their solidarity in efforts to create breakthrough reforms, creating a foundation for the country to make miracle steps in national development in the next decades, according to the article./.

Hieu has become the first Vietnamese to ever win a prize at an international microelectronics competition.

Last year, he took a national competition to earn the only berth to represent Vietnam in the global contest, which was held virtually last December as a result of COVID-19. The finale required candidates to answer 18 questions in three hours.

He said the hardest were questions related to integrated circuit design, which took him a lot of time to find answer as he has never learnt about this subject anywhere before.

“It is an important milestone in my university years,” Hieu said, “with this result, I feel more confident to continue pursuing and developing myself in the field of microelectronics ; and to find a good job after graduation.”

Organised by Synopsys, an American electronic design automation company, the AMO is held annually for computer engineers and students under 30.

A Serbian student won the first prize while the second prize went to Armenia. Hieu shared the third prize with two others from Armenia and Brazil./.