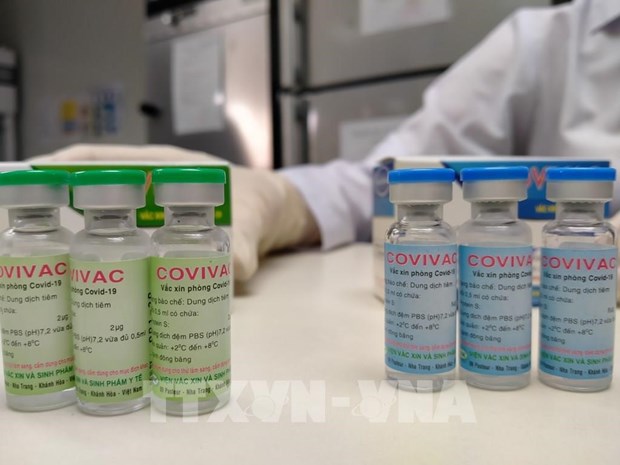 People, aged from 18-59 and residing in Hanoi , are encouraged to register for human trials of Vietnam’s second COVID-19 vaccine candidate COVIVAC (Photo: VNA)

In the first phase of the trials, 150 healthy volunteers will be injected with two doses of 0.5ml with an interval of 28 days.

They will be divided into five groups, including one group provided with placebo shots, and their health will be closely monitored within 24 hours after injections.

Each volunteer will have their health checked-up eight times in 12 months.

After 43 days since the first phase starts and shows good results, the second phase will be carried out at the medical centre of Thai Binh province’s Vu Thu district, with 300 volunteers.

The homegrown vaccine has been developed by the Nha Trang-based Institute of Vaccines and Medical Biologicals (IVAC) and the Hanoi Medical University since last May, using primary chicken embryo cell culture, a technique the institute used previously to successfully produce seasonal flu vaccines.

COVIVAC has undergone pre-clinical trials in India, the US, and Vietnam, said IVAC Director Dr. Duong Huu Thai, adding that results showed that it satisfies all conditions to be tested on humans.

The vaccine candidate demonstrated high immunogenicity during pre-clinical trials. It was created based on studies of new SARS-CoV-2 strains.

VNA
Winners of the Kovalevskaya Award 2020, a prize dedicated to outstanding female scientists, were announced at a ceremony held jointly by the Vietnam Academy of Science and Technology (VAST) and the Vietnam Women’s Union Central Committee.

A team of female scientists from the Institute of Natural Products Chemistry under VAST, and Associate Professor, Dr Truong Thanh Huong, Senior Lecturer at the Department of Cardiology at the Hanoi Medical University, were honoured this year.

The team studied and created many products with high applicability that have been used widely and served public healthcare, such as “Khuong Thao dan” (a drug for the treatment of arthritis, degenerative spine pain, and bone pain), Cordyceps Sinensis, and essential oils. The award is presented to Associate Professor, Dr Truong Thanh Huong, Senior Lecturer at the Department of Cardiology at the Hanoi Medical University (Photo: VNA)

Meanwhile, Huong has made contributions to Vietnam’s health sector by conducting many scientific studies to improve treatment relating to cardiovascular disease.

It is presented by a fund of the same name that operates in eight countries in Latin America, Africa, and Asia.

The award has been presented in Vietnam since 1985, during which 20 collectives and 49 female scientists have been honoured.