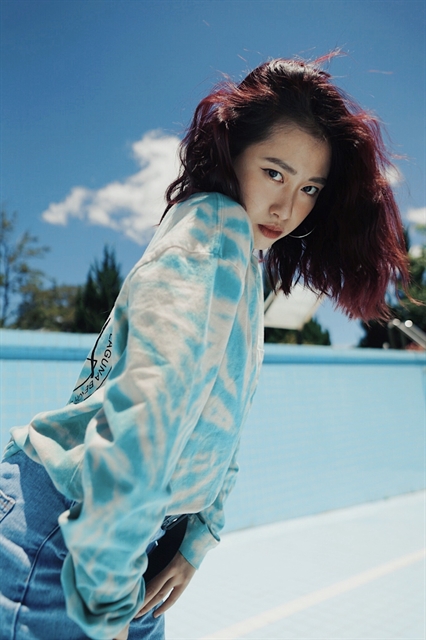 Inner sanctum: When did you first start dancing?

In middle school, I started doing K-pop dance covers by myself for fun. When I got to high school and was blown away by its dance club’s performance, I auditioned and won a place. I began taking lessons seriously at that time, and am still dancing.

Inner sanctum: And when did your teaching career get underway?

I joined Last Fire Crew as a freshman at university. It was a small, unknown crew back then. I started teaching and performing with the crew as we gained more recognition. I taught for no pay initially and only started earning a year or two into it. During my last two years at university, I realised I had become much more devoted to dancing than to my translation major. But I decided to finish my degree, and then applied to studios for teaching jobs as my main career, as well as dancing and choreographing.

Inner sanctum: What does a typical working week look like?

I’m pretty much free during the daytime. I teach three classes in the evening, which amounts to six times a week. I also teach private classes during the day. In my free time, I do research and study into the art of dance and practise with the crew three times a week. I try to keep my schedule empty on the weekend for performances and competitions, and I’m often invited to be a judge.

Inner sanctum: What do you like about what you do?

Besides getting to do what I love and am passionate about, I get positive energy from my students. Seeing how hard the beginners try, I feel even more motivated to do it well. I also get to meet people from many different walks of life and age groups, who are all happy and excited to learn how to dance. My advanced class choreographed their final performance recently. It really was wonderful.

Inner sanctum: Did you struggle with teaching at first?

Of course. I didn’t have enough knowledge to be teaching back then. At some point, I didn’t know what to teach next, and had a major growth slump. I believe that every teacher needs to constantly update their knowledge. For dance teachers, it’s important to stay abreast of trends, like teaching TikTok moves, which are well received by the younger audience.

Teaching kids was the most challenging thing I’ve ever done. I was really stressed out and couldn’t help but scream at them. Then I went to training and workshops and picked up the skills I lacked. It turned out that, with kids, you shouldn’t talk too much — you should just do it and show them.

Inner sanctum: Was it easy to approach hip hop culture despite not living abroad? Why is it important to learn about the culture when learning hip hop?

I only seriously looked into it when I started to teach, so I could give the students some basic knowledge. But self-research is not enough. I attended workshops and sought advice from professional international dancers I met at contests, to deepen my knowledge. Hip hop is an imported culture. It’s not our own. To know it well is to respect other people’s culture.

Inner sanctum: I see that you’re really detailed at giving cues. Is there a reason behind that?

As a student, I liked teachers who taught meticulously. Students sign up for classes so they can dance as well as the teacher. So it’s important to show them how to go about it.

Some teachers aren’t certain of what they are teaching, and come across as lost. But when they know what they’re doing, so will the students.

Inner sanctum: How does it feel to win teacher awards?

I’m actually a very competitive person in everything I do. As it was done by voting, I lobbied all of my students to vote for me. The award is also physical proof of a year of hard work as a teacher.

I’ve heard that hip hop abroad is divided into many different styles and crews who tend to compete against each other, since it revolves around the “battle” culture.

In Việt Nam, all of the crews are pretty much united and so free to create. Hip hop is also taught in studios, which gives more people the opportunity to learn and practise. VNS

Textbooks are no longer the only way to learn about history, as much can now be picked up via visuals like movies and photos or on social media groups.

Đặng Thanh Huyên actively uses all of these sources. She is the author of the colourful Vietnamese history artbook Việt sử diễn họa (Việt Nam History Through Drawings), is the artist behind the historical animation series Hào khí ngàn năm (Thousand years of pride), which aired on Việt Nam Television (VTV), and is the co-administrator of “Đại Việt cổ phong” (The Great Việt ancient customs), a Facebook group on historical research. 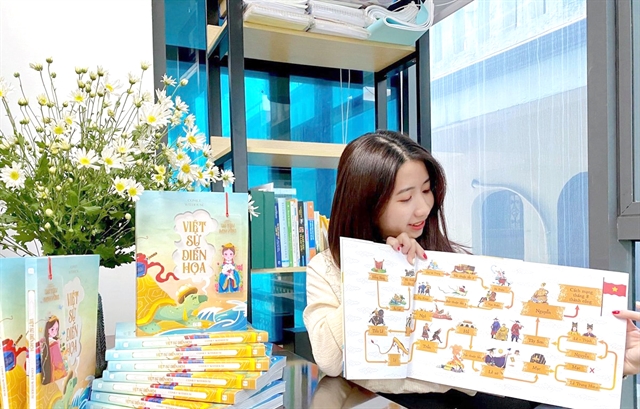 After the 2,000 episodes of Hào khí ngàn năm finished airing on VTV1 and VTV3 in 2018, most have since appeared in some shape or form on YouTube channels, where they always collect tens of thousands of views.

It was the first project Huyên participated in after graduating from university, creating a foundation of her passion for Vietnamese historical clothing and history. She also co-manages the “Đại Việt cổ phong” Facebook community of over 130,000 members.

The young woman studied land management, as her parents wanted her to have a stable occupation.

“I’ve loved drawing since the seventh grade and have never stopped,” she said. “I’m always drawing and drawing, despite my parents’ disapproval.”

DETAILED DESIGN: The background and characters in the series on the Trần Dynasty. Photo Đặng Thanh Huyên

She found a job in the arts industry that both pleased her parents and gave her a livelihood. It led to her drawing the background art for Hào khí ngàn năm , specifically those on Sỹ Nhiếp, Dương Thanh, and Dương Đình Nghệ (well-known figures during the northern dominated period) and some prominent emperors of the Lý and Trần dynasties.

Her role was to draw landscapes, interiors, battleships, and armour, among other things. It required meticulous research on the architecture and decorative items of the Lý and Trần dynasties, like curved roofs of palaces, which are different from those of the Lê and Nguyễn dynasties.

She feels fortunate to know what she wants to do in life.

“If you don’t know what you want to do, then I can’t really give you any advice, but I think you should keep doing what you already do well instead of daydreaming about something else,” she said. “Keep improving and following what you’re good at, and stay patient and be willing to learn.”

Nguyễn Đức Lộc, founder of Ỷ Vân Hiên, a project on traditional clothing and a clothing designer for historical movies and music videos, is excited about how young people are taking more of an interest in historical costumes.

“The more research I do the more I find clothing to be the quintessence of our entire country,” he said. “Vietnamese people have our own unique aesthetic.”

To gain a holistic understanding of her subject when writing Việt sử diễn họa , Huyên shied away from being overly creative and instead tried to remain true to the history of each period. The book covers the original establishment of the nation until the fall of feudalism.

An illustrated timeline of Việt Nam’s history by Huyên.

At times during her research, Huyên came upon inaccurate illustrations of certain periods, which helped her reflect on the subject matter and dig a little deeper.

When she researched and began drawing, she recognised that Vietnamese culture is very much different from Chinese. For instance, Chinese collars are higher and tighter to keep out the cold, and Chinese men during the Qing dynasty often shaved the front half of their head and braided the back, while upper class men in Việt Nam just let their hair grow or shaved it all.

“To encourage young people to be more enthusiastic about studying Vietnamese values, researchers, institutions, and the media need to point out our national identities and cultural values,” said Lý Tùng Hiếu, cultural researcher and professor of cultural studies at the HCM City University of Social Sciences and Humanities.

Huyên finished the book in just over a year, and also draws historical characters to post on Facebook.

She also shares short historical stories and illustrations on her Facebook page “Comet Withouse”. Her latest project takes a look at the jewellery and outfits of the Nguyễn Dynasty, as her passion for art and history lives on. VNS

Coc Coc, the Hanoi-headquartered browser and search engine, will develop new features to meet the demand of its targeted users in suburban and rural areas, in the context of the increasing mobile phones penetration in Vietnam and the expansion of digital technology in all areas of life, Ms. Dao Thu Phuong, Deputy CEO of Coc Coc told the media gathering on December 22 in Hanoi.

Rural Vietnam is a prime market for growth, projected to be twice as fast as metropolitan areas. This is where over half of the country’s population resides – an untapped market with rising internet penetration.

According to the latest report “Vietnam’s Search for Tomorrow” released in October by Google, 77% of rural people now have internet access, and 91% use the internet daily. The internet has become a bridge to resources, products, and services that these users are accessing for the first time.

The report showed that the rural users choose Search as the key tool when making purchase decisions, with 45% of rural consumers using it to find information on products vs. traditional media (24%) and social media (27%). In fact, 77% of Vietnam rural users clicked on a search ad because of a relevant headline.

Rural users are considered as the major driving force to materialize the goal of Made-in-Vietnam search engine in the coming time.

With the achievement of 13 million mobile users on both iOS and Android, Coc Coc has risen to the top four most popular mobile browsers in Vietnam and ranked 1st among the free apps on the App Store in November.

According to the report by Statcounter, a web traffic analysis website, the market share of Coc Coc doubled that of the same period in 2019 and gained a larger piece from the search engine’s share giant Google (a drop from 94.4% to 89.9%) in August. From a zero-market share in 2013, the Vietnamese browser and search engine company Coc Coc ranked second after 7 years.

This year, the engine has reached 25 million users including 4 million mobile ones. It missed its goal of 30 million mobile users for the whole year 2020, from 24 million in 2019, mainly due to the impacts of Covid-19.

Coc Cok is estimated to gain an estimated VND235 billion (US$10.1 million) in revenue, an increase of more than 13% compared to 2019, recording a pre-tax profit of VND30 billion ($1.3 million). “This year marks the highest revenue and profit of the company since 2017,” Deputy CEO of Coc Coc Nguyen Vu Anh said.

By 2021, Coc Coc plans to launch the project Coc Coc Audience Network, as a platform connecting publishers and advertisers based on numerous users and outstanding technology. It is expected to be one of the browser’s core activities for the coming years.