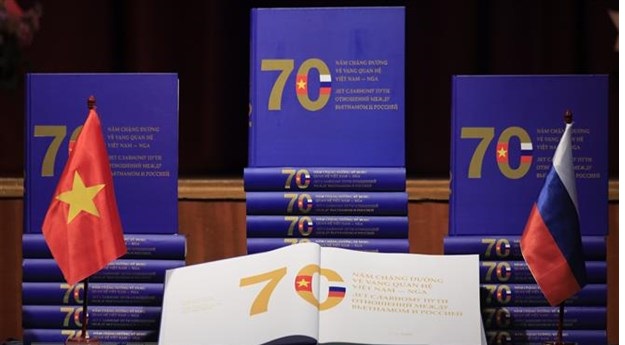 HÀ NỘI — A book on the 70 years of Việt Nam-Russia relations was launched in Moscow recently.

The book consists of five parts including 700 images and documents classified into diplomatic events and co-operation activities between the two countries in politics, economy, defence-security, culture, education, science, and people-to-people diplomacy.

The book was compiled by Vietnamese Ambassador to Russia Ngô Đức Mạnh to promote relations between the two countries.

“In my new position, I have favourable conditions to turn my wish into reality. I have collected, systematised and compiled the book,” said the ambassador at the book launching ceremony last weekend in Moscow.

Attending the ceremony were representatives of the Russian Ministry of Foreign Affairs, Federation Council, State Duma, administrations of Moscow, Saint Petersburg, and other localities, as well as local scholars, people and Vietnamese expatriates.

Speaking at the event, ambassador Mạnh said the book is a gift of gratitude for leaders, people, and readers of the two countries, which, he said, shared a traditional friendship of closeness, trust, mutual understanding and support during the wartime and in the current national construction cause.

The 624-page book gives an overview of the Việt Nam-Russia ties and introduces Vietnamese President Hồ Chí Minh’s activities in Russia, who set the foundation for bilateral relations.

In the book’s introduction, Vietnamese Deputy Prime Minister and Minister of Foreign Affair Phạm Bình Minh wrote today’s Việt Nam-Russia relations have inherited from the Việt Nam-Soviet Union relationship with the precious assets of sincere affection, and mutual support and assistance, forging a strong and loyal friendship between the two nations.

Chairwoman of the Federation Council Valentina Matviyenko stated the friendship, formed when Việt Nam was fighting to safeguard its independence years ago, has been fortified over the past years and become a common asset of both nations. — VNS

Myanmar is experiencing political instability after its army seized power and detained government leader Aung San Suu Kyi and much of her party leadership last month. Protests have broken out nationwide and at least 50 people have been killed.

Hunter Marston, a PhD researcher with the Australian National University, said that “Vietnam can play a constructive role within ASEAN to encourage Myanmar to return to stability and release political prisoners.”

He said Vietnam, chair of ASEAN last year, has shown that it values the rule of law, international peace and stability.

According to Marston, ASEAN might not really push for a diplomatic solution to Myanmar but the association could play an important role in negotiations with other countries that are capable of forcing the military to negotiate with the elected government and protesters. Among these, the key countries are Japan, Australia, and China.

Australia could push for a diplomatic solution because it has some communication with Myanmar’s military and may not adopt widespread sanctions like the U.S. Japan has a long history of providing aid and assistance to Myanmar, despite repeated military coups in the past, so Japan is a trusted partner and a major investor with a lot of influence over the country. China is probably the most important country for Myanmar’s military, and is likely to take a more active approach this time to pushing the military towards return to democracy.

Marston said he expected to see the key countries act together, sit down with Myanmar’s military generals and tell them that they need to restore democracy for peace in the country, failing which these countries will stop trading or investing in the country.

“Speaking with one voice, those external parties can influence Myanmar’s military thinking.”

He noted that Vietnam has good relationships with Australia, Japan, and the U.S., and therefore, was well placed to be an intermediary. Vietnam can also share some of its resources and expertise with Myanmar to combat the Covid-19 pandemic as a goodwill gesture.

Derek Mitchell, former U.S. Ambassador to Myanmar, said that within ASEAN, Vietnam was one of the most powerful nations with a strong economy, strategic mindset, and deep commitment to the viability of ASEAN.

Vietnam also has close economic and military ties with Myanmar, making it a trusted interlocutor of the Tatmadaw. Vietnam could choose to support the efforts of Indonesian Foreign Minister Retno Marsudi and others to strongly encourage the military, privately, to step back, avoid violence and consider a compromise solution in the near term, that could help improve the situation, Mitchell said.

“Vietnam’s leaders can help deliver important information and messages to the Defense Services Commander-in-Chief to enable a peaceful, just and sustainable resolution of the crisis,” he added.

Mitchell said Vietnam should recognize the fact that failure to find such a resolution soon will affect the strategic balance of ASEAN, and thus Vietnam’s interests as well.

Whatever Vietnam says on the situation will be taken very seriously by all the other members of the Security Council, he said adding that council members often looked to the ASEAN member of the council for guidance on issues with other ASEAN member states.

“Vietnam is in a very influential position on the Security Council with regard to this issue.”

Connelly said ASEAN members should engage Myanmar’s military to make sure that the military understands how isolated they are, that they don’t even have support from China, Japan, India, or Australia.

“Keeping open lines of communication with the military is a good step. But it has to be coupled with pressure.”

He said “a carrot and stick” policy of diplomacy and economic sanctions could have some effect. However, he added that resolution has to be pushed by the international community as a whole, that no one country can reverse things.

Connelly said what’s happening in Myanmar was a really big problem for Vietnam, because if the military remains in power there, countries like the U.S., European nations and New Zealand would be reluctant to work with ASEAN. This would affect Vietnam’s ability to manage diplomacy in the region in order to uphold ASEAN centrality.

“Anything that Vietnam can do, either unilaterally, bilaterally or multilaterally, to bring about an end to the coup is in Vietnam’s interest.”

Connelly said some ASEAN members had shown dissatisfaction and frustration with the lack of progress on the Myanmar situation at the online Informal ASEAN Ministerial Meeting (IAMM) on March 2, although the topic was not on the official agenda.

Connelly said the ASEAN plank of non-interference in each other’s affairs was not an absolute barrier to action.

In ASEAN history, there are many examples of political problems in a member state rising to the level of creating security challenges for others. Therefore, he said, the Myanmar crisis was no longer an internal issue, it had become an issue that is within ASEAN’s ambit.

Marty Natalegawa, former Foreign Minister of Indonesia, has often said that the norm of non-interference in ASEAN has to be earned through consultation. In this case, the coup and repression in Myanmar are serious problems, and it is very clear that the country has been uncooperative in terms of consulting with other ASEAN member states. It hasn’t earned non-interference in the eyes of Indonesia, Malaysia, Singapore, and the Philippines.

“They have to consult with fellow ASEAN member states in order to earn non-interference,” Connelly said.

On February 1, in its statement on Myanmar, Brunei as chair of ASEAN called for a return to normalcy in Myanmar.

“What ASEAN could do is it could make much clearer its objections to the coup, and to the Tatmadaw continuing in power.”

Leif Eric Easley, Associate Professor, Division of International Studies, Scranton College, Ewha Woman’s University in South Korea, noted that the crisis in Myanmar was of the type for which ASEAN is particularly ill-equipped because of its institutional deference to sovereignty and consensus.

Appeals regarding the ASEAN Charter are not going to free Aung San Suu Kyi and other civilian leaders nor deter Myanmar’s generals from committing further violence against the people. ASEAN could help by pressuring the Myanmar military to allow the U.N. special envoy to visit the country and meet with detainees, Easley said.

Daniel Sneider, an international policy lecturer with the Stanford University, said he hoped that ASEAN members and its Secretariat would make it clear that they oppose the illegal seizure of power by the Burmese military and the brutal repression of peaceful demonstrators.

Sneider said there should be some action to halt all foreign investment into Myanmar for now. The main goal should be to remind the military that they cannot profit from this situation.

Highlighting ASEAN’s role, Mitchell said the association could be a critical player in finding a reasonable solution to the situation in Myanmar. What is happening in Myanmar will affect the well-being and reputation of ASEAN as the instability caused by the coup will cross into neighboring states and the world is watching closely whether ASEAN can back up its stated principles with action, he said.

However, Mitchell, now president of the National Democratic Institute for International Affairs (NDI) in the U.S., said that given the ASEAN way of consensus and reluctance to impose costs or take decisive action on a member state for its internal affairs, he expected ASEAN’s efforts will be limited to occasional comments and meetings on the situation and quiet senior-level engagement of the junta by individual ASEAN states to press for a quick and peaceful resolution of the crisis.

Mitchell believed that if ASEAN could coordinate creatively with the U.S., Japan, India and perhaps others, such pressure could potentially have some effect on the Myanmar military’s calculations.

Sharing the views, Marston said ASEAN has a special relationship with Myanmar, because it’s membership gives the association access and influence over Myanmar that outside countries like Japan, China and the U.S. do not have.

Marston said: “ASEAN needs to be careful in managing its relationship with Myanmar. It needs to use pressure if it wants to change Myanmar behavior or military thinking.”