CellphoneS, which has 48 stores, said sales have been up five times in recent weeks.

Prices have risen by 10 percent due to low supply, and are set to rise further, it said.

GearVN, which has three outlets in Hanoi and Ho Chi Minh City, said sales have risen by 10-20 percent since the latest outbreak began.

FPT Shop, which accounts for around 30 percent of the gaming laptop market in Vietnam, said demand in the VND20 million segment has been rising this month.

Gaming laptops are not just for entertainment but also for tasks such as video editing, Nguyen The Kha, a spokesperson for the chain, said.

The chains attributed the rising demand to the latest Covid-19 outbreak in 27 localities that began on April 27, forcing students and adults to stay at home. Hanoi students have a near two-week early summer break starting May 15.

The shortage of laptop parts globally due to rising demand in Europe and the U.S. would hit imports to Vietnam this year, industry insiders said.

FIS is assigned to be Dell’s new strategic partner in and will be responsible for providing Dell products to enterprises. In ASEAN region, FIS will act as the provider of consultancy services and plan implementation for Dell.

Through this cooperation, Vietnam Dell can expand its business to the enterprise community; diversify its products and provide FIS solutions to customers in its globalization strategy.

Dell, in its turn, pledged to assist FIS establish a sale network and after-sale services throughout .

“The strategic cooperation agreement is an important mark in our process of globalization,” FIS General Director Do Cao Bao said, adding that FIS will have plenty of opportunities to expand its market outside . 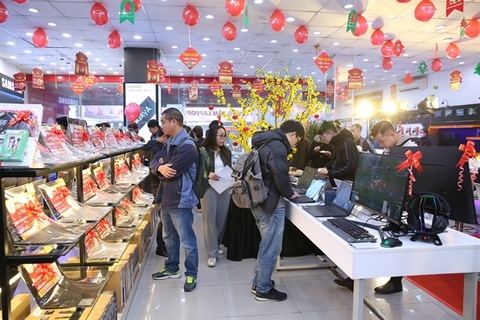 Due to the scarcity of goods and components, the price of laptops, computers and accessories has increased in local retail stores, and the trend looks set to continue.

A representative of The Gioi Di Dong (Mobile World) told VnEconomy online newspaper said that due to the scarcity of chips, it had slightly increased the price of some new models and might increase the price of other models in the near future.

A retailer said that normally, for many laptop and computer models, the price would gradually drop after three to six months after launching. But from the beginning of this year, the price of laptops and computers had increased.

In the short term, demand was very large in the low-price segment under VND16 million (US$696). Meanwhile, those in the segment above VND16 million were still enjoying promotions, he added.

Nguyen The Kha, Senior Director Mobility Groups of FPT Shop, said increased prices and the shortage of components did not affect the shop much as FPT Shop had taken careful preparations for changes amid the pandemic.

Key products have been forecasted and stocked, ensuring there were always enough supplies for 30-45 days while waiting for new shipments to arrive, said Kha.

Nguyen Ngoc Dat, CEO of the retail chain Di dong Viet (Viet Mobile), shared that in the context of insufficient supply and demand, product price increases were inevitable. However, he forecast that the scarcity could be quickly overcome.

If purchasing power increases, product prices from now to the last quarter of the year might increase slightly, ranging from 1-3 per cent, an insignificant increase.

Most retail systems in Viet Nam forecast that the laptop, computer and accessories segment would be able to meet market demand by the fourth quarter of this year.

This is a new record high for the global laptop market. It is forecasted that global laptop shipments will have a chance to reach 217 million this year. Thus, personal computer (PC) growth will be 8.1 per cent compared to last year.

Meanwhile, Gartner estimated the number of PCs (including desktops and laptops) sold rose by 32 per cent in the first quarter of this year compared to the same period last year.

With the potential for demand and the growth of the laptop and computer market, many retailers are racing to expand their business chains and take advantage of new opportunities despite the COVID-19 pandemic.

For example, Viet Mobile recently opened a new store in Bien Hoa City, Dong Nai Province. To date, this retail system has up to 18 stores in HCM City and 11 stores associated with the ‘shop in a shop model’ with network operator MobiFone.

Vietnam’s success in containing Covid-19 and applying Investment Law, which was passed in January 2021, are expected to further attract foreign investment.

Disbursement of foreign direct investment (FDI) to Vietnam rose by 6.8% year-on-year in the first four months of this year to US$5.5 billion, a report of the Foreign Investment Agency (FIA) under the Ministry of Planning and Investment has shown.

Meanwhile, FDI commitments to the country slightly declined by 0.7% year-on-year to US$12.25 billion.

“While the foreign capital inflow into Vietnam has not been as high as in previous years, those figures remain positive at a time of difficult economic environment as a result of the Covid-19 pandemic,” ADB’s Chief Economist Nguyen Minh Cuong told Hanoitimes .

“This showed the confidence and trust from foreign investors to Vietnam’s economic outlook and the government’s effective measures against the pandemic,” said Cuong.

Cuong expected increased investment will be a key growth driver for Vietnam this year and next.

“Vietnam’s success in containing Covid-19 and the Investment Law, passed in January 2021, to streamline business regulations are expected to further attract foreign investment,” he added.

During this period, 1,151 projects had nearly US$1 billion in capital contributed by foreign investors, down 64.1% in number of projects and 57.8% in value year-on-year.

Investors have poured money into 17 fields and sectors, in which manufacturing and processing led the pack with investment capital of nearly US$5.2 billion, accounting for 42.4% of total registered capital. Electricity production and distribution came second with US$5.1 billion, or 41.3%, followed by real estate with US$778 million.

FIA’s report added that out of 67 countries and territories having projects in Vietnam in the first four months of the year, Singapore took the lead with US$4.8 billion, or 39.6% of the total registered FDI for new projects, followed by Japan with US$2.5 billion, or 20.5% and South Korea with US$1.5 billion, or 12.1%.

Among 53 cities and provinces having received FDI in the January-April period, the southern province Long An has attracted the largest portion of capital commitments with US$3.3 billion, or 26.9% of the total. The southern city of Cantho came second with nearly US$1.3 billion (10.7%), followed by Ho Chi Minh City with US$1.1 billion (9.3%).

Big-ticket projects in January-April include the Long An liquefied natural gas (LNG) power plant project worth US$3.1 billion from Singaporean investors; US$1.31-billion O Mon II thermal power plant from Japanese investors; an additional injection worth US$750 million into LG Display Haiphong from South Korean investors; a tire manufacturing plant in the southern province of Tay Ninh with additional fund of US$312 million; and Kodi New Material Vietnam manufacturing plan from Singaporean investor worth US$270 million to make tablets and laptops in the northern province of Bac Giang.

‘Muon Roi Ma Sao Con’ (It’s Late, But…) was on YouTube Premiere one day before its release and attracted over 660,000 views.

It crossed one million views within seven minutes on air and 2.5 million views after 45 minutes to rocket to the top of YouTube Trending in Vietnam.

On Facebook and other forums, his fans shared the MV and exhorted people to replay it over and over to get more views for their idol. Fan groups even sought to break the record of his previous MV by playing the new one on multiple devices like laptops, tablets and phones.

The MV is about a guy who has a crush on a woman, which makes him stay up all night and daydream all the time.

Composed and mixed by Son Tung himself , it is a dreamy-catchy R&B and pop song.

In a livestream with fans on April 24, the 27-year-old singer performed the song live and spoke about the inspiration behind it, saying: “Everybody is a fool when they are in love and I’m no exception. It makes you lose control and think about the one you love all day.”

Tung has a slew of hits and many accolades under his belt, including an MTV Europe Music Award and inclusion in the 2018 Forbes 30 Under 30 list in Vietnam.

HCMC – The police of Vinh Phuc Province have discovered and detained 39 Chinese nationals who entered the country illegally.

The date when they entered Vietnam remains unknown as there was a contradiction in their statements, Thanh Nien Online reported.

After discovering the Chinese nationals who then had their samples taken for testing, local authorities quickly sprayed disinfectant at these sites and seized several laptops, smartphones and SIM cards.

The province is seeing complicated Covid-19 developments due to a group of five Chinese experts who arrived in Vinh Phuc Province on April 24, after they had ended their quarantine period in Yen Bai Province. They visited many places such as karaoke parlors, bars and beauty salons in Vinh Phuc Province. One of them tested positive for Covid-19 after returning to China from Vietnam.

After being notified of the case, the competent forces in Vinh Phuc immediately conducted contact tracing and found 14 people infected with the virus.