Ekwegbalu James Nzube, 45, said he got acquainted with another Nigerian, Jone, in China in 2014, and the latter had hired him to transport drugs from Cambodia to Vietnam.

In March he came to Ho Chi Minh City before going to Cambodia to fetch the drugs for which he was paid $2,000.

But while illegally crossing the border into Vietnam last July he was caught by border guards in Tay Ninh Province.

In his rucksack they found four plastic bags with nearly four kg of meth.

Vietnam has some of the world’s toughest drug laws. Those convicted of possessing or smuggling more than 600 g of heroin or over 2.5 kg of methamphetamine face death.

Ekwegbalu James Nzube, 45, was caught red handed by border guards at 08.00pm on July 20, 2020 while illegally crossing the border from Cambodia into Vietnam.

James Nzube admitted that he got acquainted with a man of Nigerian nationality named Jone in Guangdong (China) in 2014 when he traded in clothing in China. Johe transferred money and goods from China to Nigeria, and he often came to Nzube’s to carry out transactions.

Jone asked James Nzube to transport drugs from Cambodia to Vietnam in exchange for money, and the proposal was accepted.

On March 13, 2020 James Nzube entered Vietnam via Tan Son Nhat International Airport in Ho Chi Minh City, and then rented a room at Hoa Hong Hotel to stay. Jone later hired James Nzube to go to Cambodia and transport drugs to Vietnam for US$2,000.

He was then caught red handed transporting drugs from Cambodia to Vietnam by Vietnamese border guards stationed at Moc Bai International Border Gate. 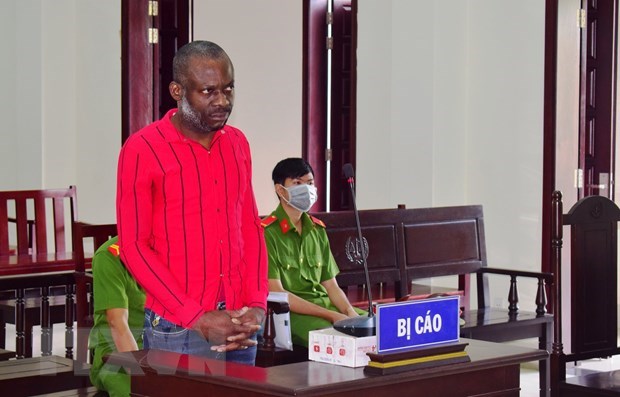 Tay Ninh (VNA) – The People’s Court of the southern border province of Tay Ninh on March 2 handed down the death penalty to a Nigeria n man for illegally transporting nearly 4kg of meth, in line with the 2015 Criminal Code.

According to the indictment, the man was caught illegally entering Vietnam from Cambodia by border guards at border marker No. 170/3 in Loi Thuan commune, Ben Cau district, Tay Ninh province, at 20:00 on July 30, 2020.

Four packages containing nearly 4kg of white crystals, later confirmed as meth, were found in his luggage. James Nzube confessed that he was hired by another Nigerian man, named Johe, with 2,000 USD to transport drug from Cambodia to Vietnam.

Nigerian man sentenced to death for transporting drugs to Vietnam

HCMC – The People’s Court of the southern province of Tay Ninh on March 2 handed down the death penalty to Ekwegbalu James Nzube, a 45-year-old Nigerian man, for transporting nearly 4kg of drugs from Cambodia to Vietnam.

Before the arrest, Nzube stayed at Hoa Hong Hotel on To Ky Street, Trung My Tay Ward, District 12, HCMC.

According to the indictment, Nzube was caught illegally entering Vietnam from Cambodia by border guards at border marker No. 170/3 in Loi Thuan Commune, Ben Cau District, at around 8 p.m. on July 30, 2020.

The border guards found four packages containing nearly 4kg of drugs in his luggage, which were later identified as Methamphetamine.

Nzube said he met another Nigerian man named Johe in Guangzhou, China, in 2014, who hired him to transport the drugs from Cambodia to Vietnam.

Nzube arrived at the Tan Son Nhat International Airport on March 13, 2020. He received a phone call from Johe on July 23 and agreed to transport the drugs from Cambodia to Vietnam for US$2,000.

Four days later, he took a taxi from HCMC to the Moc Bai International Border Gate in Tay Ninh Province and walked to Cambodia.

On July 29, he received four packages of drugs and US$1,100 from an unidentified man and was arrested while returning to Vietnam on July 30.