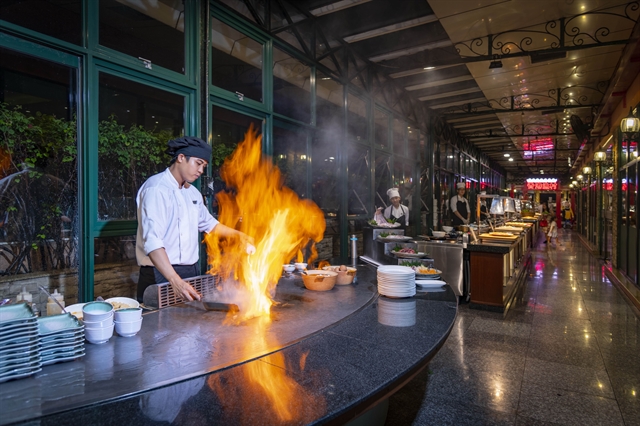 The outdoor cooking station at Café Central An Dong where diners can see food prepared before their eyes.VNSphoto.

HCM CITY– Windsor Plaza Hotel in HCM City has celebrated the arrival of Spring with exceptional deals and special events at its restaurants through March.

Kicking off the season, you can enjoy magnificent savings on Saigon’s favourite buffet at Café Central An Dong with up to 50 percent off when purchasing tickets online at  flashsale.cafecentral.vn.

Available March 1-5, each day presents a limited number of tickets for dining on a future date, so book quickly before tickets sell out. 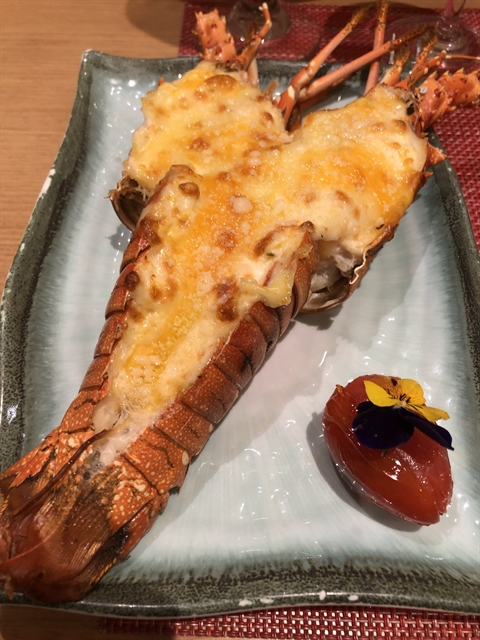 Lobster baked with creamy cheese is among the most favourites at Café Central An Dong buffet. Photo MinhPhi.

Then on March 8, the hotel will offer a special deal on International Women’s Day with a grand celebration for the family.

At Café Central An Dong gather around a dinner buffet of regional and international favourites alongside fresh seafood and an array of decadent desserts, while each woman receives one free gift.

From 6pm to 9:30pm, head to the Top of The Town rooftop restaurant & bar for the Women’s Day Retro Night filled with nostalgic fun featuring live music in bossa nova style alongside finger food and free flowing German beer. Priced at just VNĐ450,000 net per adult.

And at Ngan Dinh restaurant, delight in authentic Cantonese cuisine and enjoy one complimentary bird’s nest dessert for each woman during dinner.

The Hanoitimes – The deal between the Danish company with Viet-Uc Seafood aims to expand the market for high-end feed products, focusing on sustainability, traceability, quality and performance.

BioMar, the Denmark-headquartered feed company, has acquired a majority share in the Vietnamese Viet-Uc Seafood Corporation, with activities in shrimp hatcheries, fish hatcheries and shrimp farming.

The deal between the Danish company with Viet-Uc Seafood aims to expand the market for high-end feed products – focusing on sustainability, traceability, quality and performance, according to the Fish Site.

“Considering the performance and agility of the Vietnamese shrimp industry during the last decade, and not least during this last year of pandemic, I am sure the market holds great potential for growth,” said Carlos Diaz, CEO of BioMar Group.

Looking at market forecasts and the increasing consumer focus on healthy and sustainable seafood, the Danish group expects there will be an increasing market share for high-end feed, ensuring farmers can deliver certified products towards global retail channels.

Adding Vietnam into the equation will enable BioMar to build a strong relationship both to Vietnam and the nearby countries, as well as creating benefits from the relation between genetic and nutritional development.

“Partnering with one of the leading companies within this field to develop high performance feeds, concepts and value chain collaborations makes a lot of sense, in order to promote a positive development of the shrimp industry,” Diaz said.

Last year, BioMar signed a memorandum of understanding with Viet-Uc Seafood with the aim of establishing a partnership on aquafeed production in Vietnam, which will help Vietnam’s shrimp production be clean and traceable.

In 2020, Viet-Uc Seafood launched a high-tech shrimp farm in the northern province of Quang Ninh, and currently operates eight other hatchery facilities in the southern and central regions.

The Hanoitimes – Securities trading organizations should refrain from offering services in consulting, brokering, issuing or transacting crypto currencies, according to the State Securities Commission of Vietnam (SSC).

In a statement, the commission said the move is aimed at protecting investors as Vietnam currently does not have a legal framework to manage and deal with electronic money, virtual assets and currencies.

Deputy Prime Minister Vuong Dinh Hue has asked the Ministry of Justice and the State Bank of Vietnam (SBV) to quickly complete the legal framework and report to the government. The documents should be presented to the  government for consideration by the end of the month, according to the SBV.

The statement also referred to business activities of Fintech firms with regard to the fundraising method through initial coin offering (ICO), as well as other activities in relation to Vietnam’s stock market.

At present, there is a growing trend in Vietnam for Fintech firms to raise capital through ICO, crowdfunding or peer-to-peer lending. However, these activities pose high risks with no law available for protection.

Virtual currencies, especially bitcoin, have sparked fever worldwide. In Vietnam, the bitcoin drew significant market attention despite experts’ warning about its risks and the lack of a management framework.

On October 30, 2017, SBV said virtual currencies are not a lawful means of payment, therefore, “as from January 1, 2018, the act of issuing, providing and using illegal means of payment (including bitcoin and other similar virtual currency) may be subject to prosecution in accordance with the provision of Article 206 of the Penal Code 2015”, SBV said in a  statement released on October 28.

As a ministry-level body of  the government responsible for managing monetary policies, supervising financial institutions and keeping the country’s foreign reserves, SBV urged citizens and enterprises to refrain from making transactions in bitcoin and other crypto currencies.

Given its extreme volatility and lack of regulation, crypto currencies in general and bitcoin in particular can pose potential risks to investors. On the other hand, as explained by the SBV, bitcoin transactions are anonymous and can be used for money laundering, drug trafficking, tax evasion and illegal payments.

China and South Korea recently announced moves to tighten the management of bitcoin. Vietnam could be the next country to issue strict regulations on crypto currencies.

The Hanoitimes – The move ended a retail brand name that has been familiar with local customers for the past 22 years.

Central Group Vietnam, the owner of the retail chain Big C Vietnam, has announced its decision to rename the brand into GO! and Tops Market, officially ending a name that has been familiar with local customers for the past 22 years.

The change was actually delayed by nearly five years against Central Group’s original plan. In 2016, the Thai-based group had completed the acquisition of Big C Vietnam from France’s Casino Group.

Central Group is entitled to use the Big C brand in 10 years, but it wanted to change the name right after completing the deal. However, the transition was not easy due to the prestige of Big C brand among local customers.

In Hanoi, the four Big C super markets, including the Garden, Ha Dong, Nguyen Xien and Le Trong Tan, are scheduled to complete the change into Tops Market in this third quarter.

The Hanoitimes – In a difficult year amid the Covid-19 pandemic, exports remain a spotlight and lay a foundation for the economy to maintain its growth momentum coming into the next year.

While the Covid-19 pandemic continue to cause severe consequences on the economy as a whole and trade activities in particular, it could not stop Vietnam’s exports from attaining significant achievements.

Vice Minister of Industry and Trade Do Thang Hai shared the view at the Vietnam Export Promotion Forum 2020 held on December 16.

It is estimated that Vietnam’s export turnover could reach US$267 billion for 2020, representing an increase of 1% against the previous year, while imports are estimated at US$260 billion, up 2.6%. This would result in a trade surplus of US$7 billion for the year.

“In a difficult year amid the Covid-19 pandemic, exports remain a spotlight and lay a foundation for the economy to maintain its growth momentum coming into the next year,” stated Mr. Hai.

“As the pandemic is set to persist for a longer period, solutions are needed for Vietnam to ensure efficient utilization of free trade deals, including the EVFTA, CPTPP or RCEP, as well as to promote the Vietnamese brands globally,” he continued.

Vu Ba Phu, head of the Trade Promotion Agency under the Ministry of Industry and Trade (MoIT), said the agency plans to provide support for local traders in brand building and promoting e-commerce and IT application.

“The idea is to help them enhance resilience against the Covid-19 pandemic,” Mr. Phu said.

For Vietnam to maintain export growth of 5-10% during the 2021-25 period, the MoIT expected trade promotion activities to focus on Vietnam’s key export products, including seafood, fruits, coffee, tea, cashew, rice, rubber, textile, footwear and wooden products, among others.

“In addition to priority markets such as China, the US, EU, India, Japan, ASEAN, South Korea, Vietnam would look to penetrate new markets such as the Middle East or Africa,” he added.

The Hanoitimes – Vietnam’s trade turnover is expected to hit $540 billion this year, marking a year-on-year increase of $23 billion.

Vietnam posted a trade surplus of US$754 million in November, further expanding the cumulative surplus in the 11-month period to US$20.06 billion from US$19.5 billion recorded one month earlier, according to the General Department of Vietnam Customs (GDVC).

The government-run General Statistics Office last month estimated a trade surplus of US$20.01 billion for the January-November period.

In November, Vietnam recorded an export turnover of US$25 billion, down 7.4% month-on-month, while imports slightly increased by 1.5% to US$24.7 billion.

Revenue of some of Vietnam’s major export staples soared in the second half of November compared to the first half. They included computers, electronic devices and parts with an increase of 21.1%; textile (31.9%); machinery, equipment and parts (14.1%); footwear (24.6%); and wooden products (29.4%); among others.

Meanwhile, the domestic-invested sector recorded a trade value of US$156.42 billion, down 7% year-on-year.

The Ministry of Industry and Trade (MoIT) suggested Vietnam’s positive trade performance is thanks to a number of free trade agreements that the country is a part of, including the CPTPP and EVFTA.

“With such growth in export-import activities, there is a high chance that Vietnam’s trade turnover could soon hit US$540 billion for the whole year, US$23 billion higher than the figure in 2019,” stated the MoIT, adding this is an encouraging result amid the Covid-19 crisis.

“Vietnamese companies should take advantage of preferential treatment from FTAs to gain competitiveness against their foreign peers,” he noted.