Spring is the best time of the year to visit Gia Lai and Kon Tum provinces where travelers stroll in pine forests, explore local culture and enjoy the cold breeze there

The first destination we visited was the old pine forest which is 20 kilometers from Pleiku City. Locals named a path lined by hundred-year-old pine trees in the forest in Nghia Hung Commune “Love Street” because of its romantic setting. Strolling on the one-kilometer street in the warm spring sunshine and taking some photos with these ancient trees were the first great experiences to gain.

On the left of the street is a vast tea hill that used to be part of the first tea plantation in the French colonial time. We walked on the tea hill with bare foot and picked young tea buds, totally immersing ourselves in nature.

We then walked to Buu Minh Pagoda at the end of the “Love Street.” In fact, the religious complex surrounded by tea and coffee fields is the first of its kind in Gia Lai Province.

On the second day, we travelled to Mang Den Town in Kon Tum Province, which is 1,200 meters above sea level. The town is home to Dak Ke, also known as Toong Ro Poong Lake covering around three hectares. The big lake is associated with a legend of seven lakes and three cascades in Mang Den.

Given the all-year-round cool weather, Mang Den can be called a land of agricultural products. E Ban Farm in Mang Canh Commune behind Pa Sy Cascade is a place where travelers may witness how these products are planted and harvested. Moreover, the 30-hectare farm features mesmerizing scenery as it is sandwiched between two hills adjacent to a primary forest.

On the following day, we visited Bien Ho, a.k.a. T’Nung Lake. We travelers were enchanted by the crystal clear water giving charming views along a path leading to Bien Ho. We fully enjoyed the poetic beauty of Bien Ho when standing on stone steps at the end of the path. Since the statue of Avalokiteshvara was built in 2018 there, more and more tourists who are pilgrims have visited this destination.

Aside from the greenery spaces, local culture is one of the highlights in the two Central Highlands provinces. Our tour guide told us that to know more about the culture and rituals of ethnic groups, visitors should spend time in local charnel houses. During this leg of the trip, we visited Kep Village’s charnel houses. There, we were impressed by many statues of persons with sorrowful face, pregnant women, moms carrying children on their backs, and the like. Jrai ethnic people believe that death is not the end, but the start of a new life. That’s why the charnel house has such statues symbolizing the new life.

Apart from this unique cultural custom, Yaly hydropower plant and the Wooden Church were also worth an exploration.

The Wooden Church, a.k.a. the Kon Tum Cathedral, in Kon Tum Province was built in 1913. It is a wooden structure whose architecture mixes Roman style with that of Ba Na ethnic group. It took us a half day to take picture as every corner of the church has their own beauty.

It was such an interesting experience when traveling in the 600-meter tunnel passing through a mountain, which is in fact part of a modern hydropower plant. The underground tunnel is home to four giant generators and a ventilation system operating round the clock.

Then, we decided to finish this trip by traveling to the peak of Ham Rong Mountain. Unfortunately, we could not reach the peak because entering the mountainous area there was not permitted.

Also, on the same day, the Provincial Youth Union, Youth Federation, and the High Command of the Border Guards of the central province of Nghe An jointly organised a programme entitled “March in the Border” in the highland commune of Muong Ai, Ky Son District.

At the program, the organisers handed over a set of computers to the officers and soldiers of the Muong Ai Border Guard; over 3,000 notebooks to students living in difficult circumstances; medical equipment and 3,000 masks, 50 bottles of antiseptic solution to officers and soldiers at two COVID-19 anti-epidemic posts.

Also on March 5, in the district of Bat Xat in the northern mountainous province of Lao Cai, the Bat Xat District Youth Union organised activities in response to Youth Month 2021 with the participation of nearly 200 members and young people.

The union presented five gifts worth VND5 million each to needy households in the district; planted trees along border roads; donated five tonnes of cement and directly participated in the construction of more than 300 metres of rural roads; visited and presented gifts to two border guard posts protecting against the COVID-19 epidemic; and presented 100 national flags and gifts to the A Mu Sung Border Guard station.

With colours as words and patterns as metaphors, ethnic Chăm artisans in the Mekong Delta province of An Giang passionately create stories through weaving.

Saymah is working on a handloom when I visit her family’s craft shop. She is among the experienced weavers of the Chăm community in Phũm Soài Village in Tân Châu District. Her husband, Mohamad, is the third generation of a family pursuing traditional handloom weaving.

Their shop is small but full of handloom fabrics with colourful and charming patterns. Weaving is the language they use to create stories from threads.

Colours as words, patterns as metaphors

“Learning how to weave is like learning a language. You need to start with basic words,” the 58-year-old Saymah says.

By words she means colours. The five basic colours of Chăm fabric are red, white, yellow, blue, and black. Not only do Chăm weavers learn to remember and classify these colours as warm and cold tones, they also learn to dye the yarns themselves.

In the past, colour pigments were made from natural plants around their home: green from leaves, red from resin, yellow from tree bark, and black from ebony fruit (scientifically named Diospyros mollis ).

According to Saymah, what sets the Chăm traditional textile art apart from, say, its northern ethnic counterpart, is the dyeing technique. Chăm people have traditionally dyed their threads before setting up the looms, while weavers in the north have usually done it the other way around. 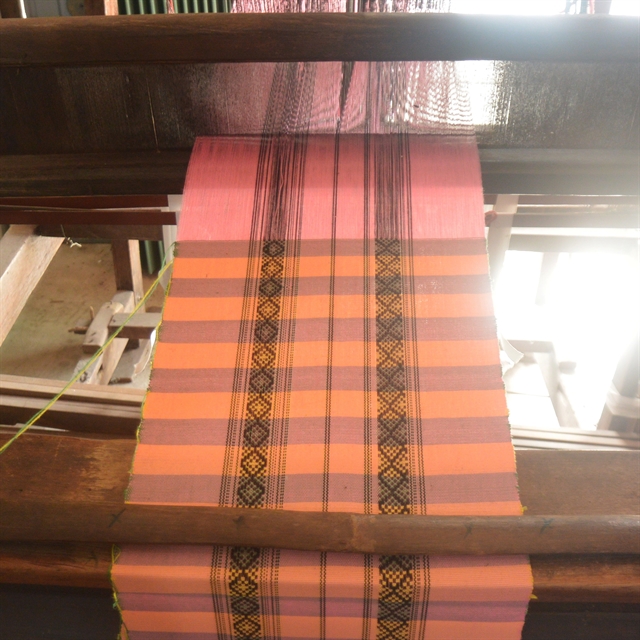 Nowadays, natural dyes are rare, with local people turning to colourants instead. But the lessons from hand-made colours help Chăm weavers select the right shades and blend them into their products.

Chăm weavers also speak through patterns as metaphors of their language.

“Chăm cloth patterns are somehow abstract,” Saymah says. “Common patterns include squares, suns, clouds, flowers, and animals. They depict nature and the daily working life and customs of the Chăm.”

However, just as languages change over time, with newly invented or borrowed words or meanings, Chăm fabric patterns have also evolved.

“We create complex shapes and patterns from simple motifs, such as four-pastel colours in a square,” she explains. “We also adopt new patterns and combine them with traditional ones to diversify our products, while still retaining the authenticity of Chăm handloom textiles.” 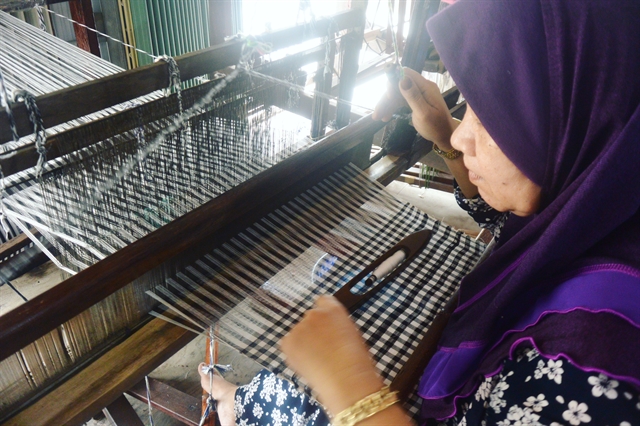 But weaving is the final step of the whole process, and there are several steps needed for Chăm weavers to tell their stories.

While writers need a plot, some characters, and imagery to compose their stories, “weavers must know what they are going to make, then structure the yarn cones , set up the looms, and create patterns,” Saymah says.

For weavers, threads and looms are like pen and paper. The equipment used in Chăm handloom weaving is, however, quite sophisticated and requires patience and attentiveness on the weavers. 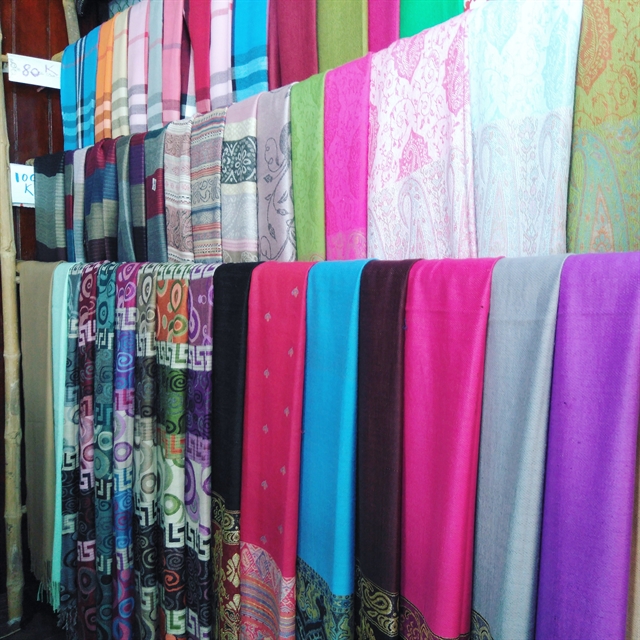 According to artisan Saymah, yarns are wound onto cones and framed on a warping mill. This step is done twice – the first time for measuring the size of the fabric and the second for creating patterns, usually taking three to five days to finish.

After that, weavers can start building their “characters”, or products, by creating patterns on the looms.

“Each craft is characterised by patterns, and the most striking feature of Chăm weaving is making patterns emerge on the fabric without being overshadowed by colour shades,” Saymah says.

The job of the weaver is to creatively and harmoniously manipulate colours and the density of the threads, making the “metaphors” echo, she adds.

Each product and its patterns require frames created from different numbers of poles. “Weavers therefore also need to prepare their poles accurately. Some patterns need 10 poles, while others might need 18 or even more,” the artisan explains.

Once all the materials are ready, it is time to weave, or write a story with the language of threads.

Passion last but not least

“There is no particular formula for weaving,” Saymah says, adding that it all boils down to the creativity, craftsmanship, and enthusiasm of the weavers.

Weavers are the artists who bring items to life. Without passion, products are emotionless and won’t be welcomed by customers, like a story that doesn’t touch the soul of the reader.

A passion for weaving and preserving its origin is what has kept the couple pursuing the tradition for more than 40 years, despite it being time-consuming and meticulous.

“We could afford a power loom, which would help us weave faster, but that’s not the characteristic of Chăm handloom fabrics,” Mohamad says.

“Handicraft weaving takes time, but the products are more authentic and durable. Running the business allows us to retain the tradition and do what we love.”

They have passed this love on to their family members and to others in the village. Mohamad has taught the craft to both their sons and their daughters, though the tradition is normally only handed down to girls.

With support from local authorities, the couple have also trained other local people to make traditional fabrics and become the next storytellers.

“We have a strong belief that our community’s stories on handloom fabric will be carried on,” Saymah says, smiling as brightly as the sun, whose light was dancing in sync with the sound of the loom she is working on. VNS 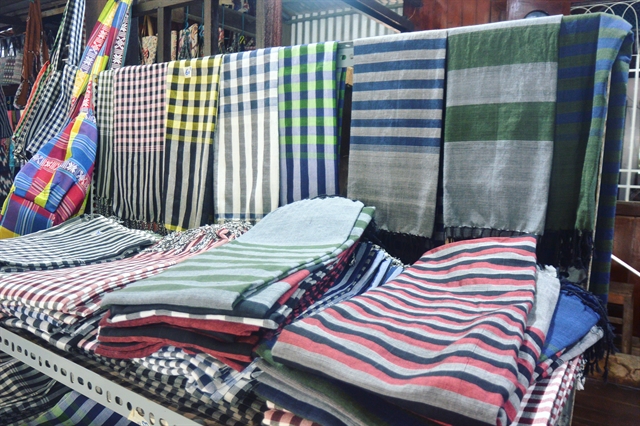