The recipients of the commendation include writer-translator Hoang Thuy Toan, translator Doan Danh Nghiep, in addition to teachers-translators Vu The Khoi and Le Duc Man.

According to information released by the Kazakh Embassy, translators Toan, Nghiep, and Man have contributed to increasing and developing cultural links between both sides through their involvement in a project aimed at translating the literary work “The Book of Words” of Abai Kunanbayev. This individual is renowned for being a philosopher, poet, civilizer, composer, and the founder of the new culture of the Kazakh nation.

Furthermore, Toan is a famous translator who has translated many literary works from Russian into Vietnamese. At present he is the director of the Fund for the Promotion of Vietnamese Literature and Russian Literature under the Vietnam Writers Association.

Teacher Khoi has also made contributions to the development of links between the two countries, as well as promoting the legacy of Kazakhstan’s sage-scholar Al-Farabi.

As an outstanding teacher, Khoi was formerly Dean of the Russian Language Department of Hanoi University of Languages and International Studies.

The awards ceremony took place on the premises of the Embassy of Kazakhstan in Hanoi to mark the the occasion of Kazakhstan’s traditional New Year Nauryz Meiramy. The event featured the participation of President of the Vietnam Union of Friendship Organizations (VUFO) Nguyen Phuong Nga, Russian Ambassador to Vietnam Konstantin Vnukov, and Armenian Ambassador to Vietnam Vahram Kazhoyan.

Kazakhstani Ambassador Baizhanov also gave a presentation to introduce traditional Kazakh instruments, various folk music genres of the Central Asian nation, and some folk and modern songs that are native of Kazakhstan.

Kazakhstan and Vietnam moved to officially establish diplomatic relations in 1992, with the Vietnamese side opening an embassy in the capital Astana, now renamed Nur-Sultan, in 2008. Following this, Kazakhstan opened an embassy in Hanoi in 2013. 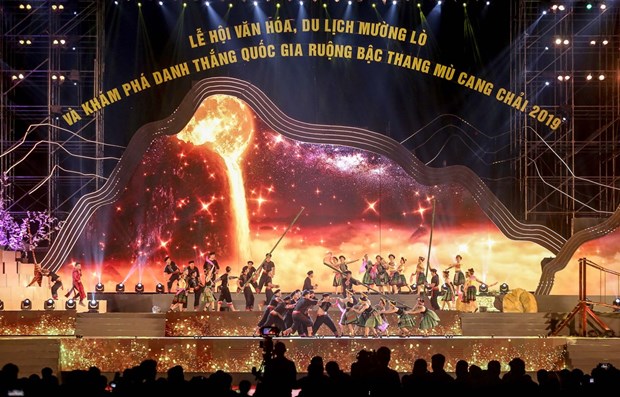 Hanoi (VNA) – Vietnam’s Newday Media JSC has recently won a gold prize in the Communications or PR Campaign of the Year – Travel & Tourism category of the 17th Stevie Awards for its organisation of the Muong Lo Culture & Tourism Festival 2019.

This is the first time a Vietnamese communication company has won the highest prize in one category of the US-based organisation.

A mass “Xoe” dance, which was performed by up to 5,000 people at the festival, secured a silver prize in the Community Involvement Programme of the Year category.

Due to the impact of the COVID-19 pandemic, female director Le Hai Yen, author of the script and general director of the programme, will receive the prizes at an online gala event on December 9, instead of receiving directly in the US.

The 2019 Muong Lo Tourism & Culture Festival was held in September 2019 in Nghia Lo township in the northern mountainous province of Yen Bai, attracting over 20,000 participants.

With the theme of “Quintessence from Legend,” the festival was a large-scale art programme which had been prepared for months.

Speaking at the opening ceremony, Chairman of the provincial People’s Committee Do Duc Duy highlighted that Yen Bai is endowed with spectacular natural landscape with high mountains and rivers, along with a long-standing history and great cultural diversity.

The Muong Lo Tourism & Culture Festival was held to highlight the beauty of local landscape and culture, inviting visitors to explore the unique values of the province.

This year’s festival started with a street parade staged by 600 performers from nine districts and towns and an art programme featuring 3D mapping technique.

A highlight of the event was a massive performance of Xoe dance involving 5,000 people of Yen Bai province.

Xoe is a unique type of traditional dance of Thai ethnic communities in the northern region of Vietnam. It depicts the daily life of Thai people and shows their wish for a peaceful and prosperous life.

The dance has been recognised as national intangible cultural heritage and is seeking the honour of being part of the intangible heritage of humanity. 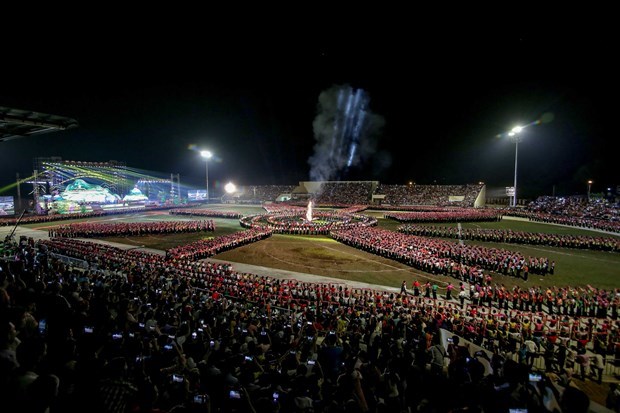 An overview of the Xoe dance performance (Photo: Newday Media)

To utilize the folk material, the organizing team made fact-finding tours to far-flung hamlets to understand more about the life and culture of ethnic minorities in Yen Bai, particularly the groups of Tay, Mong, Thai, Muong, Dao, Kho Mu and San Chay.

Meritorious artisan Lo Van Bien rewrote lyrics of a song in ancient Thai language to use in the special Xoe dance performance.

The programme concluded with the engagement of Party and State leaders in the dancing. Director Le Hai Yen said that this was the most beautiful image and memory in her career.

The event contributed to promoting Yen Bai province’s tourism with the number of tourists to the locality in the last quarter of 2019 rising by 30 percent year-on-year.

“I feels very happy as one more time our team is named in such big international awards as the Stevie Awards. Our aspiration to promote the image of Vietnam, and the country’s traditional history and culture to the world is recognized,” said Yen.

The Stevie Awards are a set of eight business awards competitions staged annually by Stevie Awards, Inc. They were created in 2002 to recognize accomplishments and contributions of companies and business people worldwide./.

A festival celebrating Ao Dai, the nation’s traditional long dress, is scheduled to open on Nguyen Dinh Chieu pedestrian street at 5:30 p.m. on December 18, with the event set to last through to December 20.

In addition to the Ao Dai fashion show, a space aimed at exhibiting collections of long dresses through various periods in the country’s history will also take place.

Elsewhere, Le Loi street will host a food festival from December 18 to December 23. On display will be approximately 80 booths showcasing a range of vegetarian food, royal food, and other traditional cuisine.

Phan Thanh Hai, director of Thua Thien-Hue province’s department of culture and sports, noted that the festivals are part of tourism products being launched at the end of the year in an effort to boost to appeal of Hue as an attractive tourism destination.

He added that travel agencies from Hanoi, Da Nang, and Ho Chi Minh City have also been invited to the event as a means of boosting tourism links among the localities.

These events aims to review the State management in protecting and promoting the values of the three heritages: the cultural space of gong in the Central Highlands, the “don ca tai tu” art form (southern amateur singing) in the southern region, and Vietnam’s traditional practice of “Tho Mau Tam Phu” (the Worship of Mother Goddesses).
Ways to improve personel capacity and management efficiency for Vietnam’s UNESCO-recognised heritages, and enhance coordination among agencies, localities in protecting heritages, will be under discussion.
Participants to the conferences will focus on assessing the current situation of heritage management, and the building of projects to protect heritages.
They will also share experience in heritage management and preservation and difficulties facing localities in the works, as well as proposed solutions to those issues.
As planned, representatives from localities boasting the heritages, experts, cultural researchers and those from relevant departments and sectors will gather together at the conferences.

Speaking at the event, Chairman Phong said it is not only an honour for himself, but the Ho Chi Minh City people too, adding that ties between Vietnam and the RoK have become closer via exchanges in diverse areas over the past years, notably the Gyeongju World Culture Expo 2017 which contributed to diversifying cultural exchanges between the two countries. 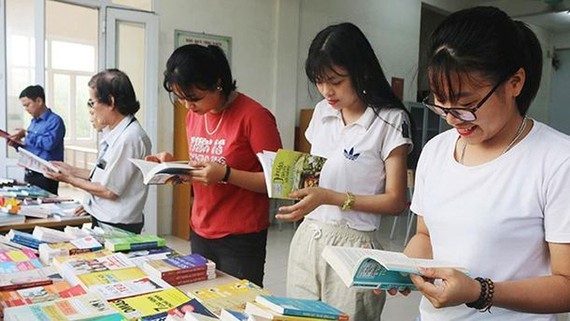 In 2021, the Ministry continued to launch the Reading Culture Ambassador Contest as it wishes to seek “reading ambassadors” , book lovers and to inspire the community. However, it is not simple to make reading movement to develop and sustain a reading culture in our society as well as become a good habit.

Sharing about this issue, the Editorial Director of Phu Nu Publishing House Khuc Thi Hoa Phuong said that presently, people take more heed of reading books but they don’t really go into the essence of the matter. Each person must consider reading book as having daily meals. reading habits should be inculcated in children at an early age. Parents and children can spend time every night reading a book at home and teachers also instruct them to read good ones at schools. It takes a long time to acquire the habit of reading, said the Editorial Director Hoa Phuong.
For years, the average number of books a Vietnamese reads a year is much lower than that in other countries in the world though many books have been published. The culprit of this is that many schools do not have reading sessions and reading is just an extracurricular activity. Worse, university students are lazy at reading books and research materials gradually losing interest in reading.
Additionally, parents don’t really pay much attention to encouraging their children’s to read book by purchasing books. Instead, they choose an easier way by letting their children use smartphones and tablets. Cultivation of book reading habit is not merely a slogan but it takes a lot of persistent efforts to improve awareness of families and the society.
In related news, the Library Department this month issued documents about administrative formalities of private library establishment to satisfy the community’s demand in a bid to promote reading culture. Currently, as some local authorities do not fully comprehend administrative formalities; as a result, they created barriers for the establishment and operation of private libraries and public libraries.
Encouraging measures are needed for the development of private libraries which will also positively contribute to promotion of reading culture.

By Mai An – Translated by Dan Thuy