PANO – Division 325 of Army Corps 2 on February 3rd celebrated the 84th founding anniversary of the Communist Party of Vietnam (CPV).

The unit’s cadres and soldiers praised the great role of the Party in the nation’s revolutionary cause over the past years, adding that thanks to the wise leadership of the Party and President Ho Chi Minh, Division 325’s troops have overcome difficulties to gain glorious achievements.

After that, they launched a tree planting festival. Last year, the unit planted over 18,000 trees and took good care of forests.

On January 8, 2021, at the National Convenience Centre (NCC) in Hanoi, the ceremony was held to announce the 50 best enterprises in 2020, top 10 reputable tourism and husbandry companies, and 500 largest businesses in Vietnam.

This is the 14th consecutive year that the VNR500 Ranking has been published to help build and promote the prestige and brands of local businesses. The VNR500 ranking is built by independent study and evaluation by Vietnam Report, based on criteria for revenue, profit, total assets, and labour force. The ranking complies with international standards and is compiled through independent, scientific evaluation.

This year, C.P. Vietnam has been selected as one of the top 50 best enterprises in 2020, ranking as well the first among animal feed producers.

2020 has been a year of fluctuations and challenges for the economy, including the husbandry sector. However, C.P. Vietnam has achieved strong improvements by inaugurating its CPV Food Binh Phuoc complex last month, which is providing high-quality and safe chicken (bred in a closed chain) with the annual capacity of 50 million chicken. The first batches of the factory were exported to Hong Kong, enabling C.P. Vietnam and Vietnam at large to be one of the world’s largest poultry food producers. 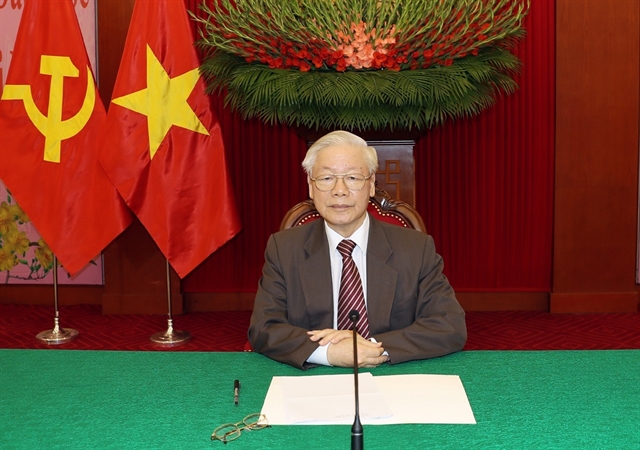 Medvedev relayed his congratulations for the 13th National Party Congress of the Communist Party of Viet Nam (CPV) and Trọng for being elected as General Secretary of the CPV Central Committee.

He also said that the congress was a very important milestone, setting out tasks to continue developing the national economy, for the happiness and prosperity of the Vietnamese people, contributing to maintaining peace and security in the region and the world.

Medvedev also conveyed the greetings of Russian President Vladimir Putin to General Secretary and President Trọng. He appreciated the relationship between the two parties and the two countries, saying that the Russian Federation attaches great importance to the traditional friendship and comprehensive strategic partnership with Việt Nam.

Trọng sincerely thanked him for the good sentiments from Russian President Vladimir Putin, Dmitry Medvedev, the United Russia Party and the Russian people for Việt Nam. They have proved the strength of the mutual trust, friendship and comprehensive co-operation between the two parties and two countries, he said.

General Secretary Trọng briefed Medvedev on the main results of the 13th Party Congress, affirming the Party and State of Việt Nam first and foremost always attach great importance to strengthening and bolstering the partnership with the Russian Federation.

The relationship between the Communist Party of Việt Nam and the United Russia Party creates an important foundation for deep and effective co-operation between the two countries, bringing practical benefits to both sides, contributing to peace in the region and around the world.

Trọng and Medvedev also discussed some measures for future co-operation. Medvedev said Russia is ready to work with Việt Nam in the fight against the COVID-19 pandemic, as well as in all other fields.— VNS

In a recent article published at moderndiplomacy.eu, he said that in the year 1986, the “Doi Moi” (Renewal) economic reform programmes were initiated. This paved the way for further reforms in the equity markets and disinvestment of the state-owned enterprises.

In 2021, the projected real GDP percentage growth would be around 6.7 percent while the inflation rate would remain stable at 3.8 percent.

“This is a fulfilling prophecy which clearly outlines that Vietnam has come out of the COVID-19 pandemic and there are signs of domestic recovery as well as consolidation of trade from the trading partners,” the scholar noted.

In fact, one of the achievements of the Communist Party of Vietnam (CPV) has been in reducing the budgetary deficit and outlining new restrictions with regard to government guarantees.

In the last five years, the CPV has taken active interest in reforms in terms of disinvestment of the state-owned large enterprises and also modernising the monetary and fiscal systems. The fight against corruption has paid dividends.

He added the reduction in the licensing procedures and active state intervention on administrative matters have facilitated the growth of the private sector in Vietnam. As a result of these initiatives, Vietnam is now enlisted as one of the fastest growing economies in Asia.

The country’s GDP has also increased to 300 billion USD in 2020 while the per capita GDP has now reached nearly 2,700 USD.

By the end of 2020, the World Bank stated that Vietnam has performed exceptionally well in containing the COVID-19 crisis and is on the way to recovery. The merchandise trade surplus as well as foreign exchange reserves are on the upswing.

Jha highlighted that the efforts had been made whilst Vietnam weathered floods and natural disasters. The country is on its way to realise its climate targets stated in the Paris Agreement as one of the first signatories, he added.

Incidentally, the world had experienced recession in the 2016-19, yet Vietnam was one of the exceptions.

The scholar said that Vietnam has woken up to the need of rapid urbanisation while at the same time catering to waste management and addressing environmental challenges.

This visionary approach undertaken by the CPV shows that the party is keen to project Vietnam as a middle-income country, and a middle power in Southeast Asia, he concluded./.

VNA
Vietnam not only successfully contained the pandemic but also posted a GDP growth of 2.91 percent, with the International Monetary Fund (IMF) saying it was among countries with the best economic achievements. (Photo: VNA)

The article reviewed the country’s economic development since it embarked on its “Doi moi” (Reform) cause, most notably in 2020 when the COVID-19 pandemic spread globally and economies shrank deeply.

Vietnam not only successfully contained the pandemic but also posted a GDP growth of 2.91 percent, with the International Monetary Fund (IMF) saying it was among countries with the best economic achievements.

The 13th National Congress of the Communist Party of Vietnam (CPV), meanwhile, set forth strategic targets for the short, mid, and long terms, specifically to 2025, 2030, and 2045, with a focus on foreign investment attraction, scientific-technological reform, and the transformation of the digital economy model.

Over the next two decades, Vietnam will concentrate on industrial modernisation and scientific-technological reform, while its FDI policy will shift the focus from quantity to quality, with attention paid to high-tech and high value-added projects.

Vietnam has therefore begun to conduct national digital transformation and set a task of developing digital economy, digital society and digital Government while closely combining digital Government with administrative reform, the article said, adding that transparency is considered a gauge of the efficiency of service and operational capacity of all-level agencies.

The article also quoted Professor Kenichi Ohno from Japan’s National Graduate Institute for Policy Studies (GRIPS), who is the Japanese Government’s advisor in its cooperation with Vietnam, as saying that although Vietnam’s economy has posted rapid growth over the past years, there remain limitations in policy making.

Vietnam would become the biggest investment magnet in Southeast Asia once its investment and business climate is further improved, he said./. 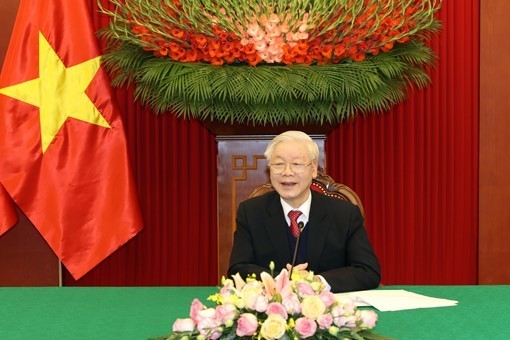 HÀ NỘI — The Vietnamese Party, State, and people always treasure the solidarity and whole-hearted support, both spiritually and materially, that Cuba has given to Việt Nam during the struggle for national liberation as well as the cause of national construction and defence over the past six decades and more.

The comments were made by Party General Secretary and State President Nguyễn Phú Trọng during his phone talks with First Secretary of the Communist Party of Cuba (PCC) Central Committee Raul Castro Ruz on Tuesday morning.

He thanked Raul Castro for his congratulations on the success of the 13th National Congress of the Communist Party of Việt Nam (CPV), the 91st founding anniversary of the CPV, and his re-election as the General Secretary of the 13th CPV Central Committee.

Congratulatory messages like these from Raul Castro and many Cuban agencies and organisations have vividly demonstrated the special friendship between the two countries as well as the close ties and mutual trust between Party and State leaders of the two countries, Trọng said.

He described the 13th National Party Congress as a milestone in the development of the CPV and Việt Nam.

The top Vietnamese leader shared the current difficulties facing Cuba and expressed his belief that under the leadership of the PCC, led by Raul Castro, the Cuban people will overcome all challenges, complete the socio-economic update policy set at the sixth and seventh National Party Congresses, and successfully organise the eighth National Party Congress of the PCC scheduled for April 2021.

For his part, Raul Castro praised the prestige, role, and major contributions of Party General Secretary and President Trọng to Việt Nam’s cause of national construction and defence and the Việt Nam-Cuba special friendship.

He noted his belief that under the leadership of the CPV, led by Trọng, the Vietnamese people will successfully materialise guidelines set at the 13th National Party Congress and reap more fruit in socialism building.

Raul Castro spoke highly of the valuable support of the Vietnamese Party, State, and people to their Cuban counterparts, especially in ensuring food security in Cuba through rice supplies and effective cooperation in agriculture and other spheres.

The Cuban Party, State, and people will make all-out efforts to preserve and promote the special friendship, he affirmed.

On this occasion, the two leaders also exchanged invitations to visit their respective countries. — VNS