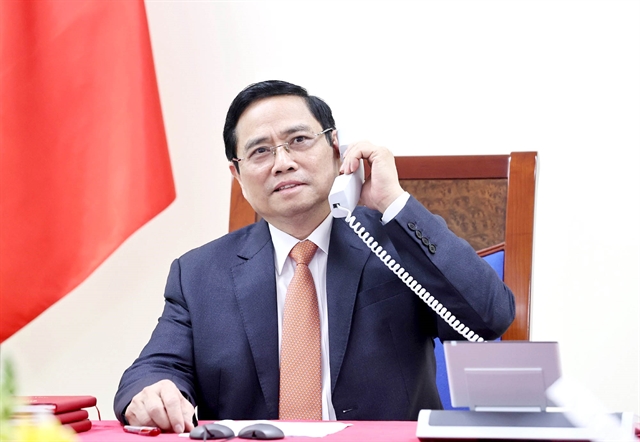 Calling Chính to congratulate him over his election as Prime Minister of Việt Nam, Lee also appreciated Việt Nam’s success in responding to the COVID-19 pandemic and in socio-economic development as well as external relations.

In reply, Chính said he hoped to work closely with the Singaporean PM to further promote the strategic partnership between the two countries across all fields.

The two government leaders rejoiced at the positive developments in bilateral cooperation despite difficulties brought by COVID-19. They noted that Singapore was the biggest investor in Việt Nam in 2020 and the first quarter of 2021.

They agreed to bolster joint work in fields of the countries’ potential and strength, such as finance, information technology, agro-fisheries, education-training, and infrastructure, while seeking to expand cooperation in areas related to the Fourth Industrial Revolution such as clean energy, smart city, innovation, digital economy, as well as the sharing of experience in management, economic development, and human resources training.

The two sides agreed to boost cooperation in responding to COVID-19 and facilitating the repatriation of each other’s citizens, and accelerate negotiations on travel preferential regulations between the two countries toward resuming safe commercial flights that suit the situation in each country and in the region to promote bilateral trade, investment and tourism ties.

Chính appreciated the close and effective cooperation between Việt Nam and Singapore at regional and international forums, and thanked Singapore for supporting Việt Nam as Chair of ASEAN in 2020. He asked Singapore to continue backing Việt Nam in its role as a non-permanent member of the UN Security Council for the remainder of 2021.

The two PMs affirmed their resolve to make active contributions to building a strong, united and resilient ASEAN Community with a central role and common voice in regional and international peace and security issues.

Chính invited the Singaporean PM to visit Việt Nam at a suitable time. Lee accepted the invitation and expressed his wish to welcome the Vietnamese PM to Singapore. — VNS

A view of the UN debate hosted by Việt Nam on Monday from Hà Nội. — VNA/VNS Photo

NEW YORK – Monday’s high-level open debate on ‘Cooperation between the UN and regional organisations in enhancing confidence-building and dialogue in conflict prevention and resolution’ chaired by Vietnamese President Nguyễn Xuân Phúc in his capacity as President of the United Nations Security Council (UNSC) in April has been praised by the international community.

Ambassador Olof Skoog, head of the EU Delegation to the UN, said: “It was a very good debate.”

The EU side is “very strongly supportive of the UN,” the ambassador told the Vietnam News Agency (VNA)’s correspondent in New York.

The UN needs support as it “cannot do everything everywhere by itself,” he said, highlighting the important role of regional organisations in conflict prevention and resolution since they have trust and confidence among parties in conflict.

“So as long as they always follow the UN Charter, respect the international law, I think that’s kind of locally driven diplomacy,” he said.

Ambassador Anouparb Vongnorkeo, Permanent Representative of Laos to the UN, said Việt Nam has played an increasingly important role in the UN, especially the UNSC.

According to the Lao Ambassador, the matters proposed by Việt Nam in the debate are significant as they look towards promoting co-operation within the UN as well as between the UN and regional and sub-regional organisations.

Hailing the smooth and effective collaboration between the UN and regional organisations, he said the two sides had made efforts to enhance ties.

In an interview with the VNA, Ambassador Fatima Kyari Mohammed, Permanent Observer of the African Union (AU) to the UN, appreciated Việt Nam for running the high-level open debate.

She said the role of regional organisations and regional co-operation as a whole is fundamental for building confidence and promoting dialogue in conflict prevention and resolution.

“From the AU perspective, we have signed a joint framework for enhanced partnership in peace and security as well as development with the UN over three years ago,” the ambassador said.

“And since then co-operation between the two organisations has been strengthened to the institutionalisation of our joint efforts, reinforcing our collaboration and coherence, and harmonising strategies and approaches.”

Quý also met with Ambassador Guillermo Fernández de Soto, Permanent Representative of Colombia to the UN, during which the two sides compared notes on activities of the UNSC regarding the implementation of the peace agreement signed by the Colombian government and the Revolutionary Armed Forces of Colombia (FARC) in 2016.

Quý affirmed Việt Nam’s support for the peace process in Colombia and its wish that all relevant sides will continue with dialogue to deal with the present challenges, especially through established mechanisms in accordance with the peace agreement.

Việt Nam will work with the UN and the international community to support the Colombian government, and promote peace, security and development in Colombia, he said.

Asked about the UNSC’s open debate, Quý told the VNA that the participating countries, both members and non-members of the UNSC, commended Việt Nam’s preparations for the event. VNS

The hospital will attract the cooperation of international hospitals and medical facilities as well as foreign experts.

Vietnam-German (Viet-Duc) Friendship Hospital has been recognized as a training center, which

The certification will expire in February 2024.

With nearly 2,500 employees, more than 1,500 beds and over 50 modern operating rooms, Vietnam-German Friendship Hospital is the country’s largest surgical center, performing about 70,000 surgeries each year.

Training facilities related to surgery not only in the UK but also in many other countries wish to be certified by the RCS to promote their ranking and prestige regarding the training and quality of their surgeons, the director added.

“With the RCS’s certificate, Vietnam-German Friendship Hospital will attract the cooperation of international hospitals and medical facilities as well as foreign experts,” Giang said.

“The hospital’s doctors train thousands of students every year and cooperated with major hospitals in the world, including those in France, the US, Japan, the UK, South Korea, Australia, Taiwan (China), among others.”

To help people in remote and mountainous areas access modern medical care, the hospital has officially launched the Telemedicine system, which is donated by the German government.

The RCS held an online assessment on December 11, 2020 which lauded the training at the hospital.

A new tour connecting Hanoi and Son La will take visitors to attractive destinations of the Northwestern province.

The Hanoi Tourism Association in cooperation with the its peer from the northern mountain province of Son La launched a new tourism product connecting Hanoi and Son La on April 20.

Accordingly, at the end of December 2020, the two associations conducted survey trips for tourist routes and destinations in Son La province to develop tour packages based on the strengths of local culture and ecology.

Son La is one of the attractive destinations in Northwest Vietnam. Besides well-known spots such as Moc Chau, Ta Xua, Bac Yen, there are destinations to discover.

Among them, Quynh Nhai Lake where is considered as “Ha Long Bay” of Northwest, is drawing the interest of many local enterprises to exploit and build new products.

Speaking at the launching ceremony, Mr. Hoang Chi Thuc, Chairman of Son La Tourism Association said in order to maintain and develop the tour in a long term, it was necessary to strengthen the cooperation among enterprises in the destinations to improve service quality, develop more products and services with the cultural identity of each locality, and invest in human resource training to form a team of tour guides and other tourist staff.

He also emphasized the cooperation between service providers and travel agents in Hanoi and other provinces to bring tourists to Son La.

Son La has a plan to develop the province’s tourism in the period of 2021-2023, which focuses on building 24 diversified and unique products. It will focus on tapping into local tourism resources such as Moc Chau National Tourist Area, Son La hydropower dam area including Quynh Nhai Lake, agrotourism and so on. 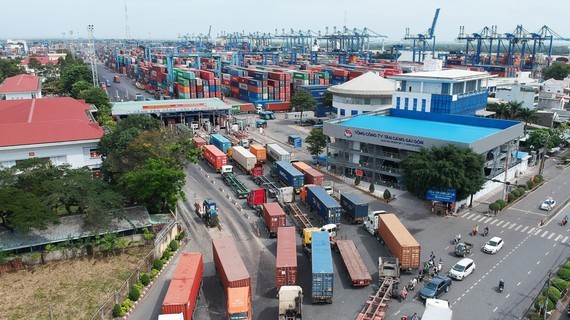 Cat Lai Port
Terminal infrastructure fees cost VND15, 000 (US$0.65) per ton of goods and VND4.4 million (US$191) per 40-foot container.
Revenue from collecting fees from businesses and individuals for use of infrastructure facilities and public services at seaport terminals for import-export activities will be used to upgrade transport infrastructure system and invest in technology and services in Cat Lai Port and other terminals in the city, helping reduce traffic congestion and accidents and enhance the capacity of maritime transport. The fee collection unit will receive a 1.5 percent deduction from the gross revenue.
According to the municipal Department of Transport, HCMC’s seaport system includes Cat Lai port complex on Dong Nai River with 7 terminals, Saigon port on Saigon River with 12 terminals, Hiep Phuoc port on Soai Rap River with 12 terminals, and Nha Be port on Nha Be River with 11 terminals, playing a key role in connecting the maritime transportation system of the South-eastern region and the Mekong Delta.
The total amount of goods through the city’s seaports was 170 million tons in 2019, accounted for a quarter of the country’s total output of goods of 600 million tons.
The ports are at risk of overload due to the high amount of containers, heavy traffic congestion on the roads around terminals, leading to an increase of logistics costs, environmental pollution and traffic accidents.
A fee collection software through the 24/7 system of Ho Chi Minh City Customs has been completed, allowing port business units to check and supervise the payment of charges.