State-run oil conglomerate has continued to seek the government’s approval for a fresh tax cut this year for locally refined oil products from the Dung Quat oil refinery, which is located in the central province of Quang Ngai.

Locally refined diesel and jet fuel cannot compete with imported goods due to the higher tax rates, said PetroVietnam in the document submitted to authorities.

Declining import taxes on fuel products following the realization of a regional free trade agreement has drastically cut the price of imported fuel products, making the prices of local products uncompetitive and resulting in mounting unsold stock, the firm said.

According to the ASEAN Trade in Goods Agreement (ATIGA) import duty on diesel and jet fuel from countries in the region will be cut from 20 percent to 10 percent from early 2016.

Meanwhile, the tariffs for the products churned out by Dung Quat remains at 20 percent, making them unable to compete with imported products, said PetroVietnam in the document signed by its deputy general director Nguyen Sinh Khang.

The preferential tax rate applied for South Korean products is realized in line with Circular 20 of the Ministry of Finance dated on December 16, 2015 on preferential import tariffs under the FTA reached earlier between the two countries.

Among Dung Quat Oil Refinery’s product lines, gasoline accounts for more than 90 percent, of which 50 percent are diesel and jet fuel.

The plant will have to be temporarily shut down if such large unsold inventory is not cleared, said PetroVietnam, in the third attempt so far to help its oil refining arm Binh Son Refining and Petrochemical Ltd (BSR), which manages the refinery.

In addition, PetroVietnam also concerned about difficulties BRS is facing in finding local distributors to sign long-term contracts for its petroleum products in 2016.

In the context of plummeting world oil prices and reducing import duties, many domestic petroleum wholesalers only want to sign short-term contracts, lasting from two to three months, to buy locally refined fuel with BSR, and are reducing the amount of their orders

Even the country’s largest wholesaler, Vietnam National Petroleum Group (Petrolimex), PetroVietnam’s largest buyer, signed contracts for only two months of the year and reduced the monthly volume it bought from 120,000 m3 tom 80,000 m3 of diesel to wait for the next moves in the world market, said PetroVietnam.

Such reduction in purchase volumes and the fact that those wholesalers only wanted to sign short-term deals have exposed the plant to more risks, affecting its plans in crude oil purchases, sales, as well as the objective of ensuring safe operation of the plant this year.

In 2015, PetroVietnam twice proposed tax cuts for fuel produced by Dung Quat Oil Refinery after the implementation of preferential tariffs following the ATIGA.

The Ministry of Finance decided to reduce tax on petroleum products from Dung Quat to 20 percent, the same levels as the rates imposed on fuel products imported from ASEAN countries.

The BSR last year earned VND6 trillion ($270 million) profit from a VND95 trillion revenue generated by its $3 billion plant, which became operational in 2009.

In mid-2015, work on a $1.82 billion expansion project for the plant to increase capacity to 8.5 million tons a year by 2012 started, bringing the total investment for the project to nearly $5 billion.

The People’s Committee of HCM City has directed all educational establishments in the city to remain closed and resume online study until Feb 28.


Under the city’s original plan, students would have returned to schools and universities on February 17. But, under the new directive, they will resume online study after the Tet holiday until February 28 to maintain the academic year schedule.

Schools will also continue to implement measures to prevent and control the spread of COVID-19, and students and teachers will have to submit health declarations when they return to school.

At the beginning of this month following the COVID-19 outbreak, the city authority directed schools to switch to online study for the week before Tết.

The HCM City Centre for Disease Control and Prevention announced today that most COVID-19 patients connected to the Tân Sơn Nhất International Airport cluster have had no symptoms or mild symptoms.

Many of those cases connected to the airport cluster have tested negative for COVID-19 after a short period of isolation and hospital treatment, the centre said. 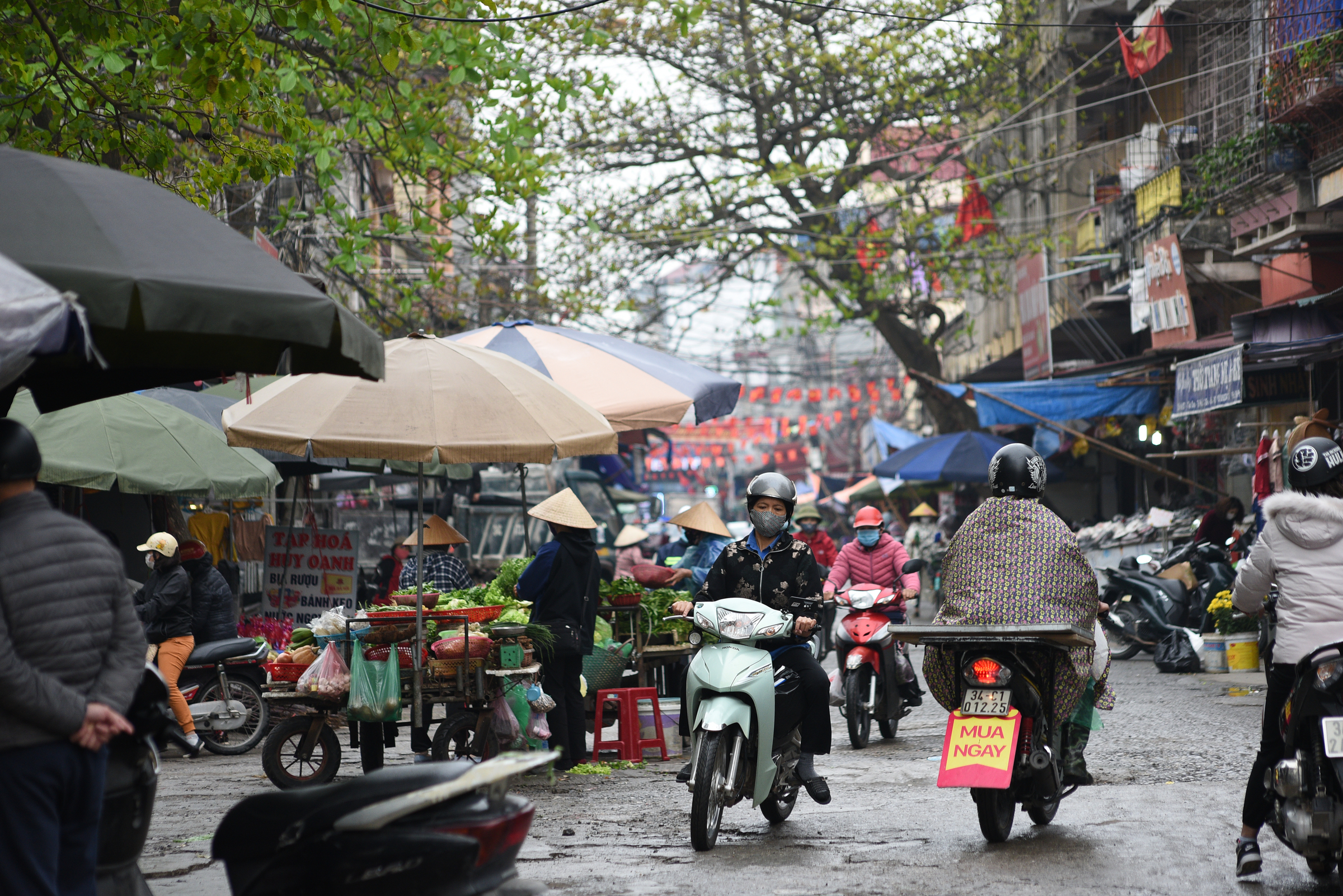 The Sao Do Market was full of people’s chatter and the sounds of motorbikes, a stark contrast to the desolation and closed shop signs during the lockdown.

The town, a hotspot of the country’s latest Covid-19 outbreak, went through two lockdown periods between January 28 and March 3, the longest of all localities within the northern province. 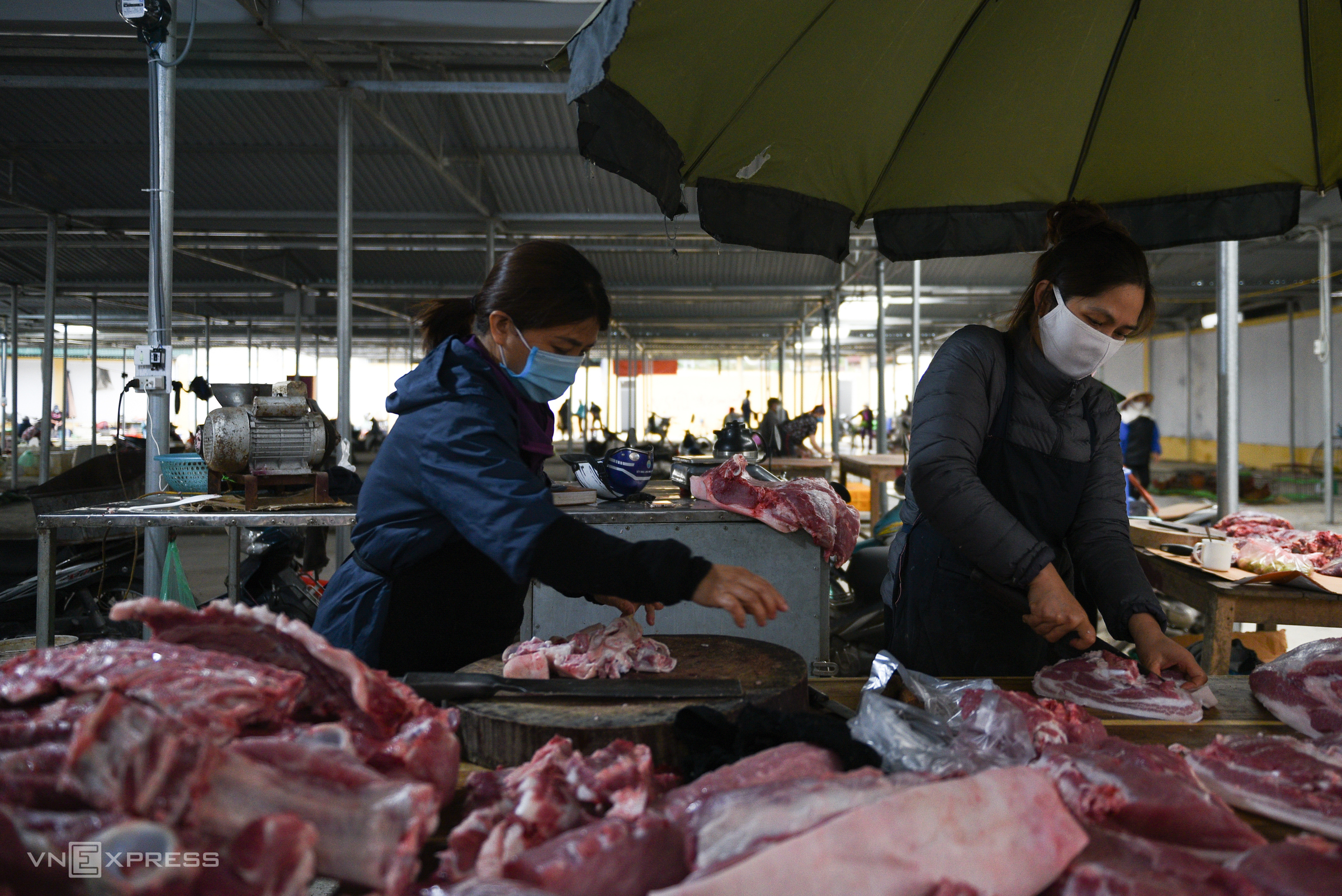 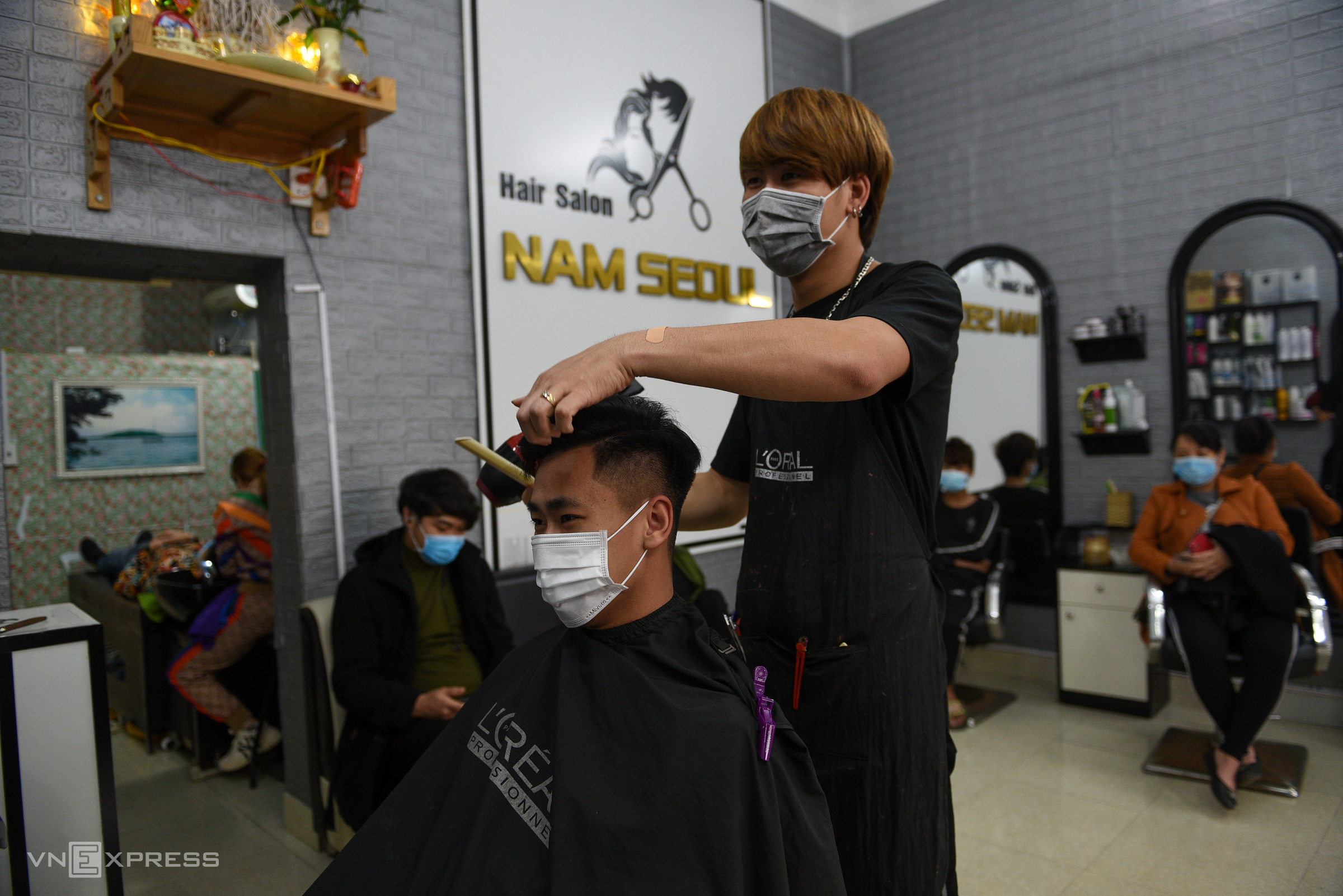 Nguyen Thanh Nam, a barber, said he has been working continuously since 8 a.m. without rest.

“Everyone wants to change their hairstyles after a month spent in lockdown. Some people had to wait for too long, so they decided to come back in the afternoon. I’m also excited to be able to work again,” he said. 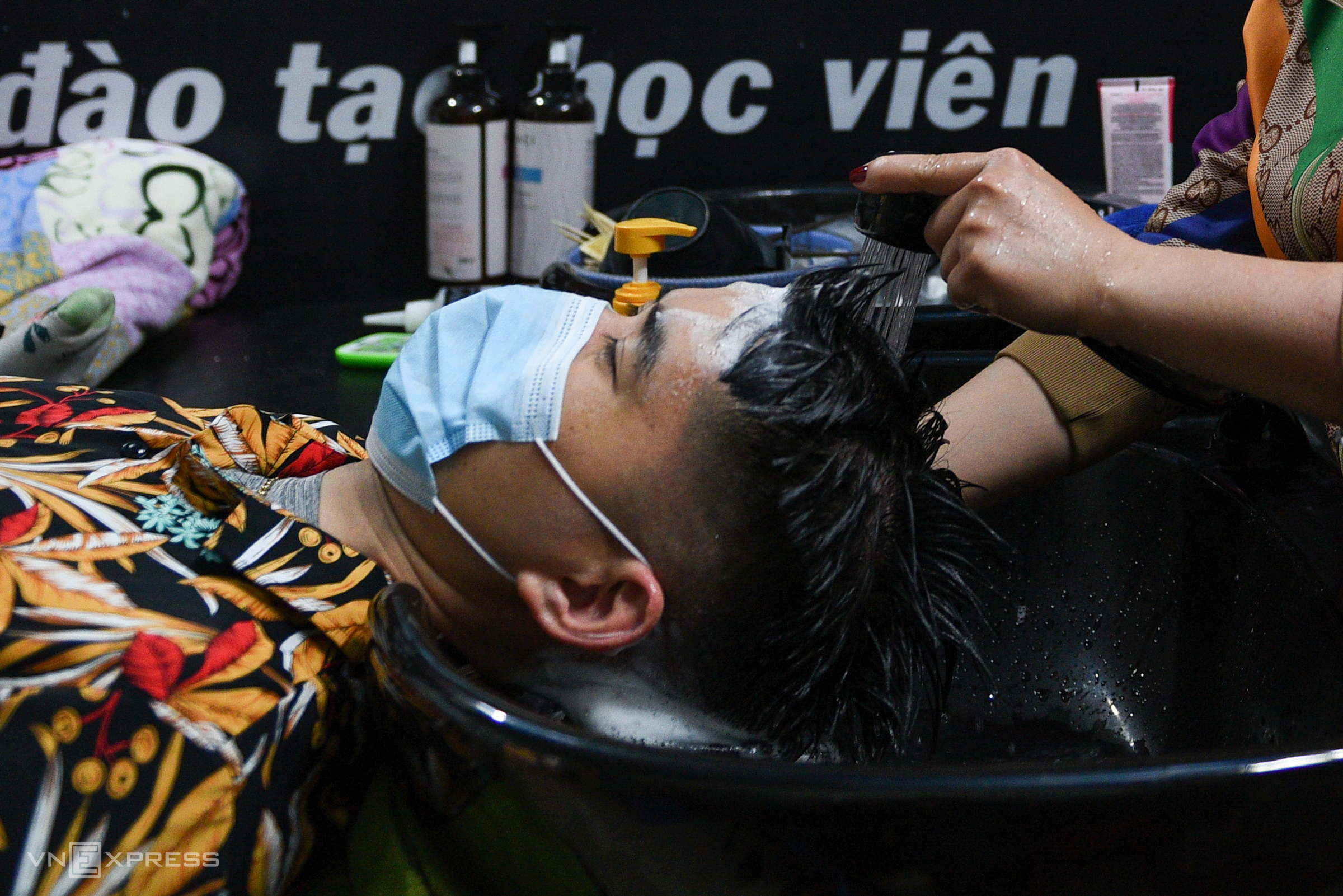 Tran Van Hien, 34, who works in marketing, said: “Today the shops are reopening, so I decided to cut my hair a bit to renew myself before getting back to work. I had to wait for nearly two hours but it was worth it.”

Hien said that as soon as he heard his hometown was going to be locked down, he rushed back from Hanoi to be able to enjoy the Tet festival with his family. 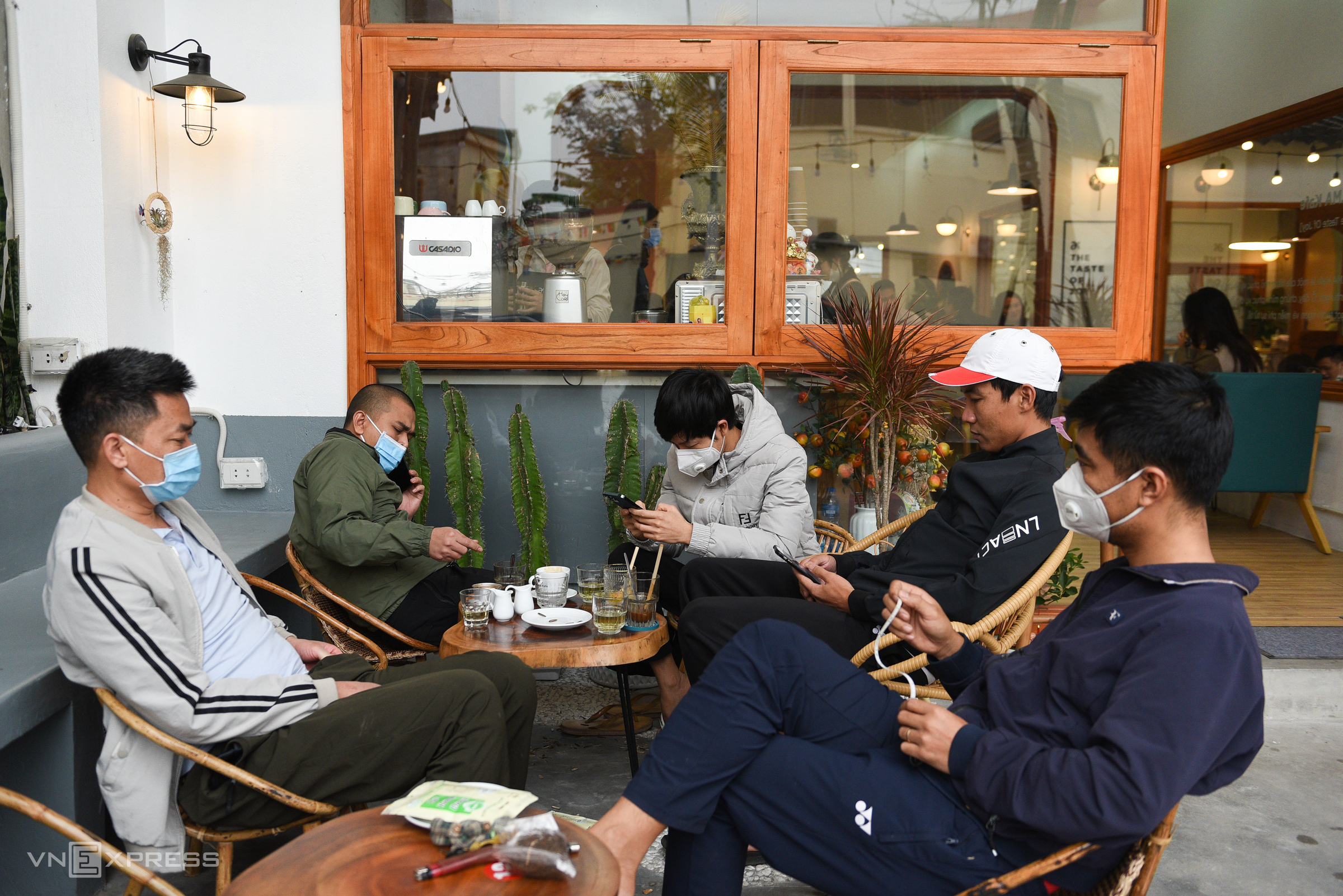 Coffee shops in the town are packed with customers again. 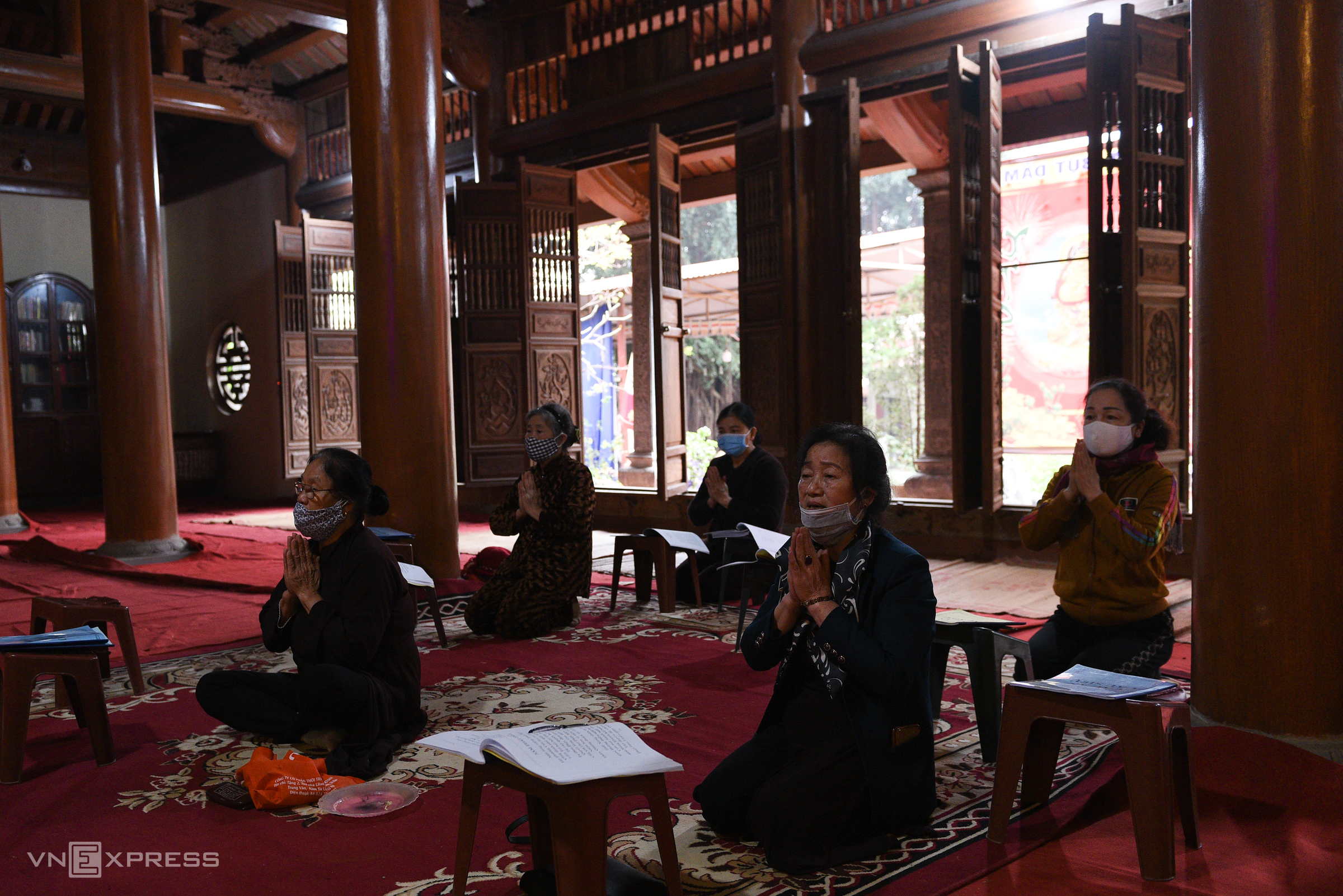 At the But Dam Pagoda, people returned to pray as soon as the monks said it would reopen after the lockdown.

“When I heard the pagoda was reopening, I was ecstatic. Praying is all about your inner intentions, but to be able to pray in front of Buddha, it makes me feel calm,” said Vu Thi Chuc, 73. 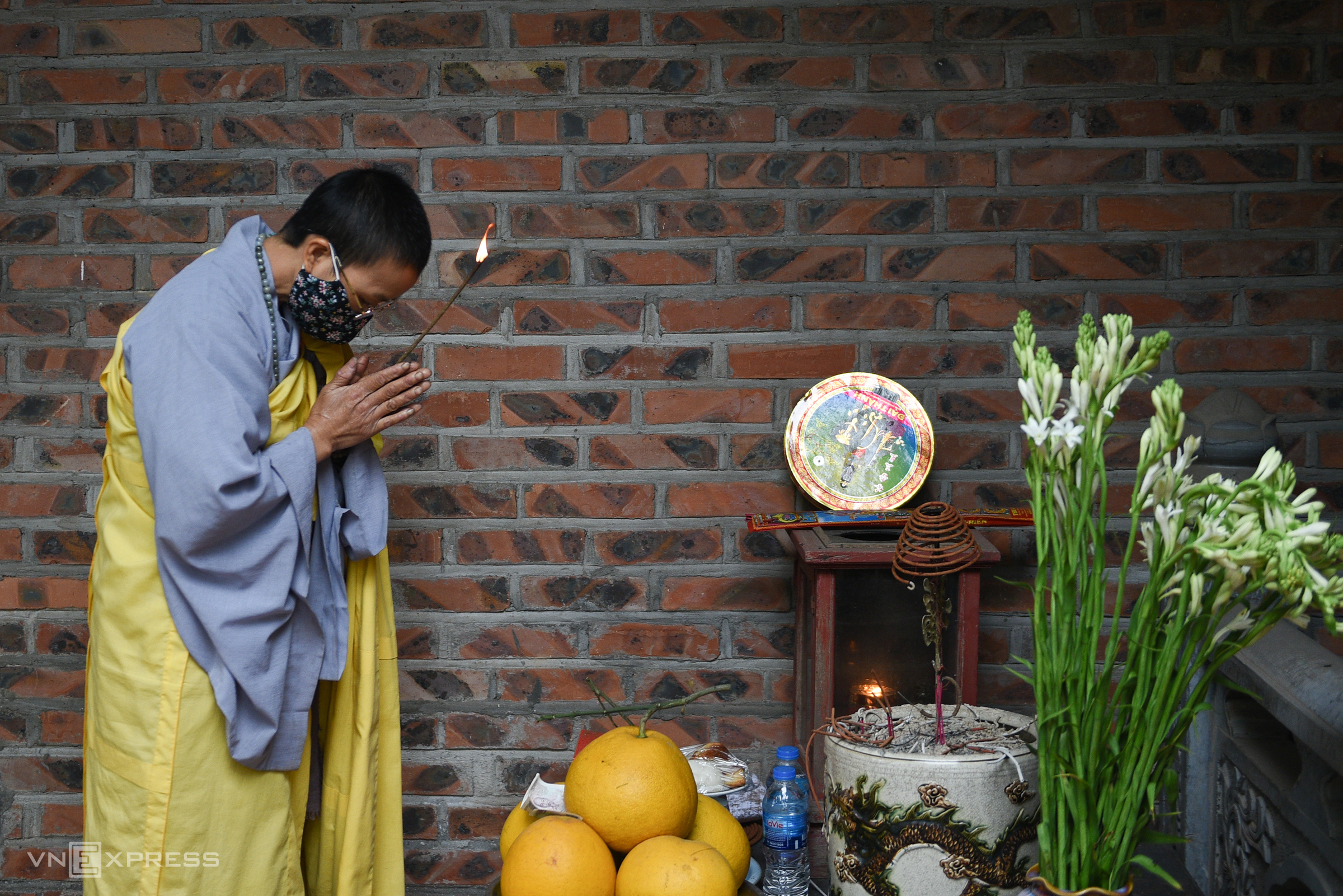 Thich Dieu Khai Doan, a monk at the pagoda, chants sutras and offers incense at an altar. 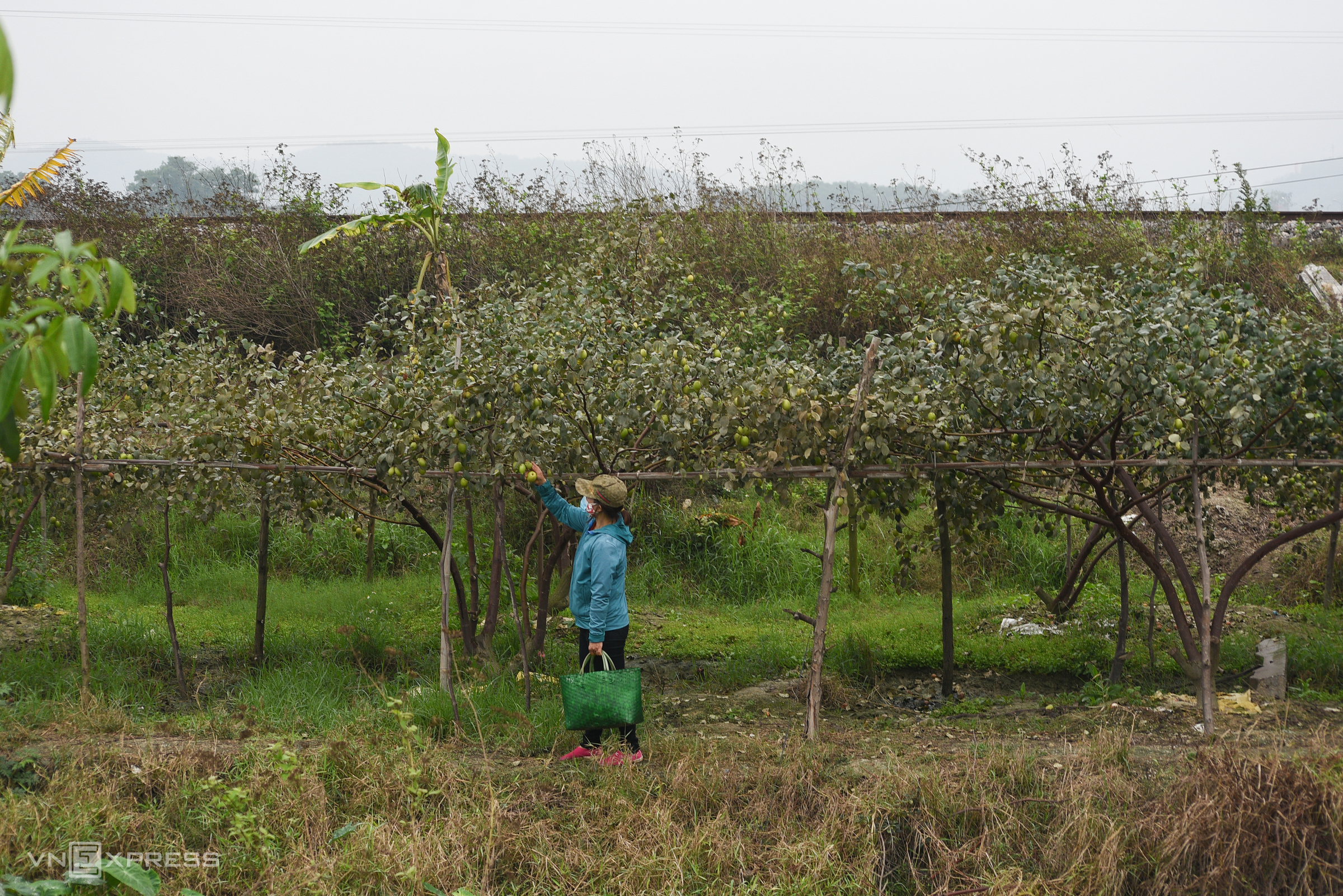 Over the past month, she had been carrying the harvested fruit to nearby Binh Bridge due to the lockdown, hoping vehicles would pass by and buy them. 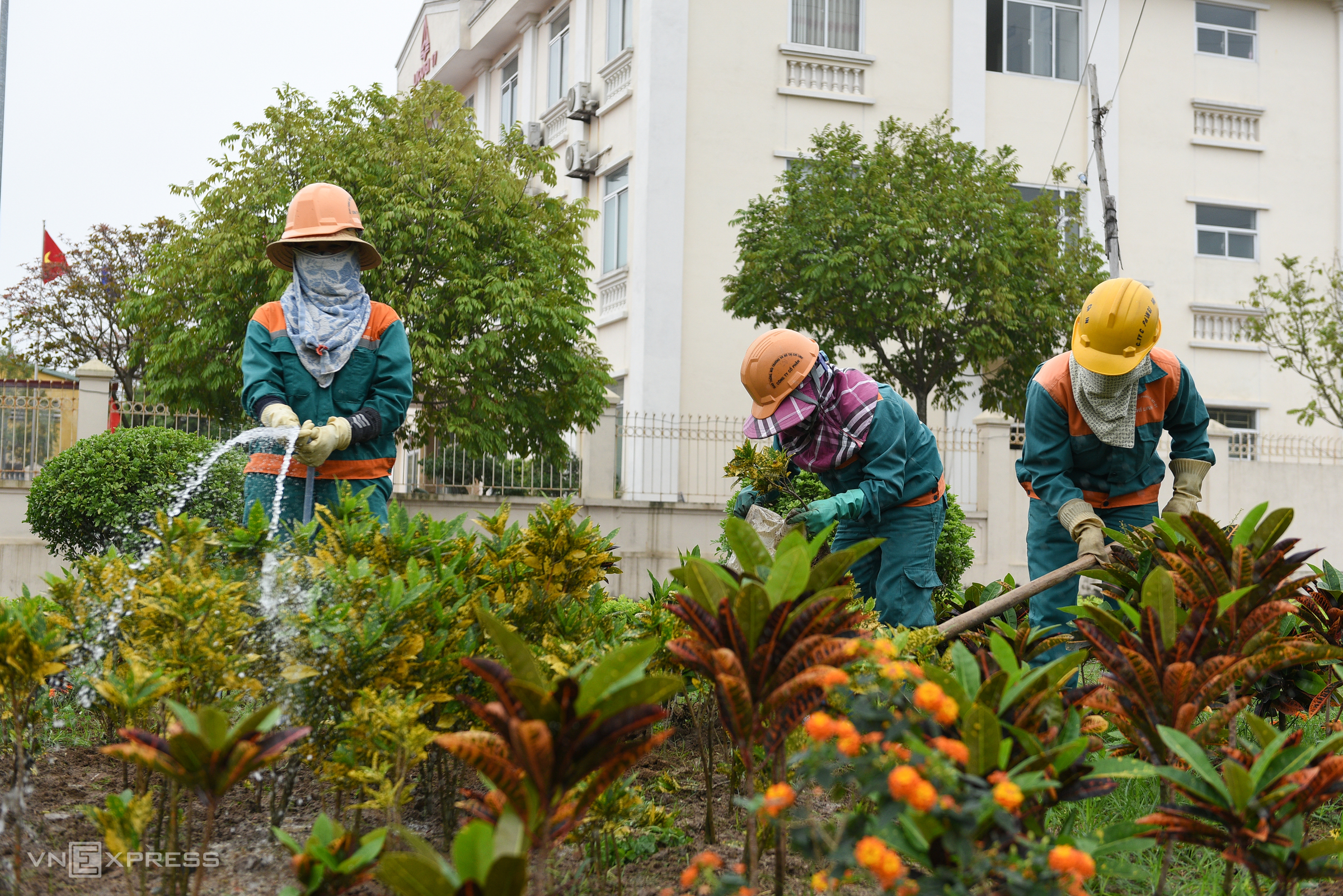 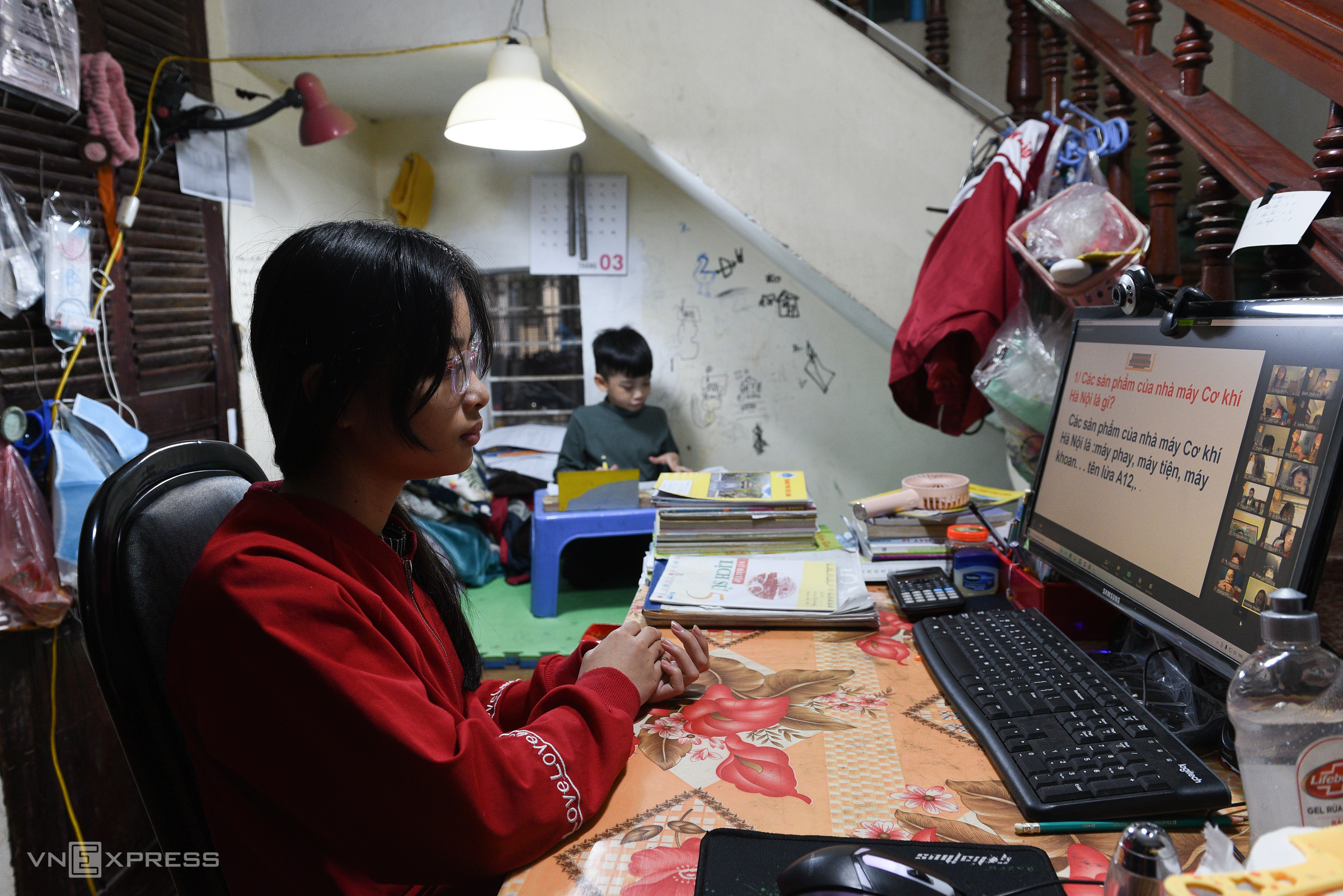 Nguyen Thi Ha Giang, 10 and her brother Nguyen Bao Long, 7, are taking online classes until March 17 like the rest of the students in Chi Linh.

With 695 community transmission cases, Hai Duong Province is the biggest Covid-19 hotspot in the country’s latest outbreak that was detected on Jan. 28.

Six of the cases were recorded in Hai Duong Province, the country’s epicenter now, the health ministry said, adding they were direct contacts of infected patients and had been put in quarantine beforehand.

The other three were registered in Hai Phong, with their epidemiological record being tracked back.

Vietnam had spent almost two months detecting no domestic infection before it found the first local case on January 27 and confirmed it one day later, the health ministry said.

A total of 800 local cases have been detected in 13 provinces and cities since then, making it the most serious wave to have struck Vietnam after the first-ever COVID-19 patient was recorded in the country on January 23, 2020.

More than 80 percent of these patients are asymptomatic while 14.7 percent exhibit mild symptoms, according to the health ministry’s analysis.

Daily new infections have been in decline over the past week thanks to social distancing, contact tracing, and targeted testing and lockdowns, the health ministry said, adding that community spread in the epicenter of Hai Duong has clearly slowed down.

Vietnam has recorded 2,392 coronavirus cases, including 1,493 local infections, as of Monday night, with 1,717 recoveries and 35 virus-related deaths, according to the Ministry of Health’s data.

The dead had suffered from comorbid health problems, including 31 in Da Nang, three in Quang Nam Province, and one in Quang Tri Province.

The country is currently quarantining almost 121,000 people who had contact with infected patients or made an entry from pathogen-hit regions.

The municipal People’s Committee has sent a document to relevant agencies regarding COVID-19 prevention and control measures in the coming time.

Other non-essential services and businesses will be allowed to reopen from March 1, but strict pandemic prevention and control measures will have to be applied.

All activities at these venues must ensure an at-least-one-meter distance between people.

Eateries and cafés must not serve over 30 people at a time.

Religious activities must not include more than 50 participants at a time, while a one-meter-distance rule must be kept.

The city recorded 36 community-based COVID-19 cases between February 6 and 11.

A total of 35 locations in 10 districts and Thu Duc City were sealed off to prevent the disease from spreading further into the community.

As of Tuesday afternoon, lockdown had been lifted from all of these locations.