The films will be screened from April 1 to December 31 in 11 cities and provinces nationwide.

Vietnamese audiences will have chance to watch 16 bespoke classic and modern French films that will be screened in 11 cities and provinces nationwide in 2021.

The Ministry of Culture, Sports and Tourism has authorized the Institut Francais Vietnam (IFV) to screen French films in Vietnam for the year of 2021.

This year IFV’s catalog of motion pictures include:

– Robert Doisneau: The Magic Behind The Camera

– Maid out of Work

– The Light of Truth in the City of Roubaix

– The Legend of the Red Box Called Cartier

– Isabel Marant: The Origins of the Collection

– Versailles – Palace of the Sun King

– 52 Minutes of Sublimation on the Catwalk

The films will be screened from April 1 to December 31 in 11 cities and provinces nationwide, including five centrally-run cities of Hanoi, Ho Chi Minh City, Danang, Haiphong and Cantho, the northern provinces of Thai Nguyen and Lao Cai, the central provinces of  Nghe An, Ha Tinh and Thua Thien-Hue, and Da Lat City in the southern province of Lam Dong.

Films are only screened after obtaining a license from the Cinema Department.

The ministry also noted that screenings will only take place once the Covid-19 pandemic is fully brought under control in the above localities. In addition, relevant preventive measures must also be strictly observed.

Built in 1899 and located at 75 Dinh Tien Hoang Street, this was one of the first French-style buildings to come up in Hanoi. It was designed by Heri Vildieu, the architect of many other buildings in the city such as the Supreme Court, Presidential Palace and Hoa Lo Prison.

Its French name, Maison Centrale, can still be seen at the entrance at 1 Hoa Lo Street. Hoa Lo Prison was used to incarcerate Vietnamese political prisoners but later housed American prisoners of war and was known in the U.S army as the “Hanoi Hilton” during the Vietnam War (1954-1975).

Built in 1899, it has been well maintained and is now a popular historical and architectural attraction for both locals and foreign visitors.

Built in 1875, the State Bank of Vietnam building used to be the Hanoi branch of Indochina Bank (Banque de l’Indochine) established in 1875 in France.

Situated at 49 Ly Thai To Street, it is behind Paul Bert Park, now known as Ly Thai To Flower Garden, not far from Hoan Kiem Lake.

Despite being a European-style building, its façade is decorated with oriental motifs usually seen on Vietnamese pagodas and temples like the seal script and octagon.

The Neo-Gothic style St. Joseph Cathedral, the oldest church in Hanoi, has many of the same design elements as Notre Dame Cathedral in Paris.

It is now not only a place of worship but also a hip hangout for young people from all over the country.

The Government Guest House, a classic French building at 12 Ngo Quyen Street (Henri Rivière Boulevard), used to be known as Tonkin Palace and housed the Tonkin Governor. It was designed by Adolphe Bussy with some style influences from the Napoleon III era.

The house, built in 1918, survived both the French and American wars. In 1945 President Ho Chi Minh moved into it and its name was changed to Bac Bo Phu.

Trang Tien Plaza at 24 Hai Ba Trung Street was originally called Maison Godard. It was taken over by the Vietnamese government in 1960 and renamed as Bach hoa tong hop (General store).

In 2002 the store, built in 1901, was renovated and has since been known as Trang Tien Plaza. It mostly sells luxury items.

The creators of the Hanoi Opera House, a neoclassic-style theater, were three French architects. The design was partly based on the Garnier Opera House in Paris.

It was built in 1901 and is now one of Hanoi’s most famous architectural landmarks. The theater at 1 Trang Tien Street has a capacity of 900 seats and is used for music programs, chamber music concerts and plays.

Dong Xuan Market, built in 1889, comprises five buildings with a total area of around 6,500 square meters. Behind five triangular arches on the façade is a corrugated roof.

The market at 15 Cau Dong Street used to be the biggest in the north and was burned down in a fire in 1994.

The next year it was rebuilt at a cost of nearly VND68 billion (nearly $3 million) into a three-story building with 14,000 square meters of floor area. It houses more than 2,000 stores now.

A special show featuring contemporary dances and ballets will be restaged by artists of the HCM City Ballet Symphony Orchestra (HBSO) on Saturday (April 10). NeoClassic Ballet is a 189-minute show featuring three contemporary dances and a ballet by French and Vietnamese choreographers. (Photo courtesy of HBSO)

The 180-minute event, NeoClassic Ballet, will feature three famous contemporary dances and a classical ballet by French and Vietnamese choreographers.

It tells the stories of a young woman, played by Lăng, who has a dream about sharing her feelings with strangers.

The artists will dance to music by Chopin, Faure, Beethoven, Satie and Albinoni.

He received a degree in ballet teaching from the Centre National de la Danse in Paris in 2005. He has worked for leading ballet troupes such as the English National Ballet and the Ballet of the Opera National de Bordeaux in France.

He has created and choreographed several famous ballets, including Somina Vertigo and Beaudelairean Souls.

The show will continue with Falling Angels and My Dream , contemporary dances by Vietnamese choreographers Nguyễn Phúc Hùng and Trần Hoàng Yến

The duo will perform to Vietnamese music.

My Dream is a story of youth choreographed by Meritorious Artist Yến. The dance highlights young people, and their dreams and hopes.

Audiences will see Lăng, who performs in Dépaysement, again as the lead dancer in this story.

The three dances, Dépaysement, Falling Angels and My Dream, have been staged several times, leaving a strong impression on audiences.

The event will close with In Your Black Eyes, a new production by choreographer Hùng. The ballet features Thanh Ngân, Thái Bình and Minh Hiếu.

“Through In Your Black Eyes, dancers will introduce neoclassical ballet, a 20th century style that takes from Russian dances and traditional ballet,” said choreographer Hùng, a graduate in choreography from the Fontys Dance Academy in the Netherlands.

“The dancing in neoclassic ballet is less rigid than in classical ballet. It is usually done at more extreme tempos and is more technical as well.”

The event, NeoClassic Ballet, will begin at 8pm on April 10 at the city’s Opera House, 7 Lam Sơn Square, in District 1. Tickets are available at the venue and at www.ticketbox.vn.

At the Indie Fest in the U.S., which promotes independent filmmakers and unique voices, the movie won the Award of Excellence for its art direction, and the Award of Merit (Asian Film Feature).

In the movie, directed by Chinese director Guo Xiang, Phuong plays Nguyen Thi Hoa, a nurse trying to find love but beset hit by tragedy as she falls in love with American doctor James Marquis (Kazy Tauginas) in the 1930’s French Indochina.

The film is a collaboration of filmmakers in Vietnam, China, and the U.S., with Chair of the Broadcast Journalism department at New York Film Academy, Bill Einreinhofer as executive producer, and a budget of around $500,000, according to IMDb, an online database of information related to films and television programs.

“The subtext of the film is the nature of colonialism, and the corrosive effect it has on both the colonizers as well as those colonized,” Einreinhofer explained.

Vi Kien Thanh, head of the Cinema Department under the Ministry of Culture, Sports and Tourism, said that “Tinh Yeu Vo Hinh” has been licensed for screening in Vietnam. Producers have said the move will hit domestic giant screens this year.

Among the films, “Yellowbird”, a heartwarming tale of an orphaned bird leading a migration across the world, is a special cinematic work. The film is the first 3D animation to be produced entirely in France with a talented team from Europe. French animator and director Benjamin Renner, co-director of Oscar-nominated “Ernest & Celestine” (2012), created the character designs for the film. The music is the work of British composer Stephen Warbeck, who won an Oscar for his soundtrack to “Shakespeare in Love” (1998).

The remaining films have all been recently made, with funny content close to children bringing messages close to life. Along with the desire to bring the audience warm and happy moments with family and friends, the organizing board also hopes the audience will take the opportunity to understand more about French cinema, in addition to the familiar Christmas works of Hollywood. 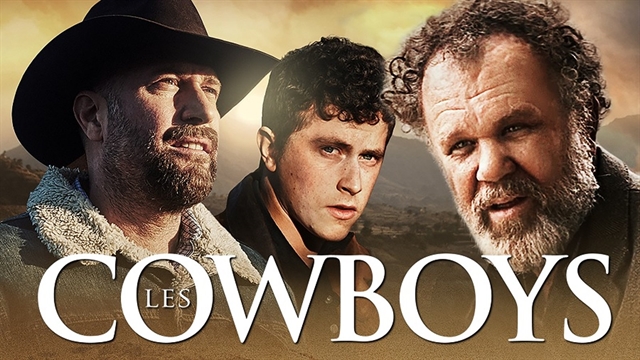 ‘Les Cowboys’  will be screening at L’Espace at 6pm on Sunday.

Inspired by A Monkey’s Tale made over 20 years ago by celebrated animator Laguionie, The Prince’s Voyage is about the old monkey Prince who runs aground on an unknown shore. Injured and lost, he is found by 12 year-old Tom, and taken in by his parents, a couple of scientists who were banished from their community because they believe in the existence of other monkey civilisations. With Tom’s help, Prince discovers a society he knows nothing about, while Tom’s parents decide to use him to prove that their theory was indeed correct.

Les Cowboys is a directorial debut of acclaimed French screenwriter Thomas Bidegain. The 2015 movie, which is about a father searching for his missing daughter with his son, was screened in the Directors’ Fortnight section at the 2015 Cannes Film Festival.

While Le voyage du Prince will be presented at 3.30pm, Les Cowboys will be screened at 6pm. Ticket costs VNĐ50,000 and available at L’espace, 24 Tràng Tiền Street. VNS