The number of vaccinated employees at a COVID-19 treatment hospital in Ho Chi Minh City diganosed with the respiratory disease jumped to 53 on Sunday after a score were detected a day before.

An additional 31 employees at the Ho Chi Minh City Hospital for Tropical Diseases tested positive for the novel coronavirus on Sunday as the institution finished screening all 887 staff members.

The hospital had found 22 infections among its employees on Saturday .

All 53 patients were already inoculated with two doses of AstraZeneca vaccine before their diagnosis, the hospital said, adding all but one case were asymptomatic.

The source of contagion may come from outside the hospital, according to an epidemiological investigation.

Contact tracing is underway to break this infection chain while 88 seriously-ill patients treated for tetanus, encephalitis, HIV/AIDS, and chronic liver disease have tested negative for the virus, according to the hospital.

The local health department decided to turn this hospital into a specialized COVID-19 treatment facility earlier this week.

The hospital, now locked down, is treating a total of 94 coronavirus patients, 35 of whom are in critical conditions.

Vietnam has been hit utterly hard by a fourth virus wave since April 27, with 7,230 local infections having been recorded in 39 of its 63 provinces and cities ever since, according to the Ministry of Health’s data.

Bac Giang Province in the north is leading the fourth round’s tally with 4,012 patients, followed by northern Bac Ninh Province with 1,327, Ho Chi Minh City with 745, and Hanoi with 459.

Recoveries have reached 3,827 while 59 patients have died, most with critical underlying medical conditions like cancer and chronic renal failure.

Almost 1.5 million AstraZeneca vaccine shots have been administered to medical staff and other frontline workers since inoculation was rolled out on March 8.

More than 54,000 people have been given two doses as of Sunday.

A COVID-19 patient linked to the cluster at a religious mission in Ho Chi Minh City has so far spread the disease to more than 90 people.

The patient – T.T.H. – resides at a tenanted house in Ward 3, Go Vap District and works at Thien Tu Company in Tan Binh District.

However, the chain of infections has been put under control, Dr. Hoa stated.

The outbreak is associated with 16 members of Revival Ekklesia Mission , a Christian congregation based in Go Vap.

The cluster was detected on May 26 and no longer causes any infection in the community, Hoa elaborated.

The number of local transmissions detected in the district on a daily basis is gradually decreasing thanks to rapid contact tracing and mass testing, the official added.

The biggest concern right now is that the district has recorded several community-based infections that are not related to the religious mission since June 3, he stated.

The district, along with Thanh Loc Ward in District 12, was required to follow strict social distancing measures for 15 days from May 31.

A social distancing drive with more relaxed regulations was implemented in the rest of the metropolis during the same period.

Vietnam has documented 10,435 COVID-19 cases as of Sunday afternoon, with 3,827 recoveries and 59 deaths, according to the health ministry.

The country has recorded 7,230 local infections in 39 provinces and cities since April 27, including 745 cases in Ho Chi Minh City.

One hundred-fifty people were evacuated following the deadly accident in the city of Shiyan in Hubei province, it said, of which 37 are critically injured.

Footage from CCTV shows wreckage and shattered glass covering the first floor of the collapsed building, where people were having breakfast and buying groceries when explosion happened.

People can be seen walking in a rubble-strewn street between damaged buildings.

Hospitals in Shiyan are asking residents to donate blood, as the injured are still under emergency treatment, CCTV said.

Police in Go Vap District, Ho Chi Minh City on Saturday launched criminal proceedings against a religious mission in the same district for spreading COVID-19 in the community.

The charge in the indictment includes “spreading dangerous infectious diseases to humans.”

Through an investigation into the recent outbreaks associated with Revival Ekklesia Mission, a Christian congregation based in Go Vap, the authorities determined that this religious mission did not comply with regulations on COVID-19 prevention, leading to the spread of the disease to many people.

A total of 142 infections that can be traced back to this mission have been detected since May 27, according to the municipal health department.

This number adds up to 157 COVID-19 patients logged in Ho Chi Minh City as of Monday morning.

Vietnam’s daily local infections rose by 68 cases on Monday noon, the health ministry said in a midday update. The agency will give another update at 6:00 pm.

Vietnam has detected 4,164 domestic infections in 34 provinces and cities since April 27, when the fourth wave broke out in the Southeast Asian country, according to the Ministry of Health’s data.

The nation has recorded 7,236 cumulative COVID-19 patients since the virus first emerged on January 23, 2020.

Recoveries have hit 2,950, while 47 virus-related fatalities have been documented so far.

Notably, 52 cases are asymptomatic and they have all been vaccinated against the virus, Dr Nguyen Van Vinh Chau, director of the hospital told local media outlets.

All the infected employees have been isolated for medical surveillance and treatment, said Dr Chau.

The HCM City Centre for Diseases Control is working closely with the hospital to carry out contact tracing, isolation, testing and disinfection.

“We are tracking down those in direct and indirect contact with the infected employees in an effort to break up the chain of transmission,” said Dr. Chau.

Preliminary epidemiological investigations show the cluster of infections is likely to originate from the community.

By June 13 afternoon, the hospital had completed rRT-PCR tests for 887 employees, with 834 samples coming back negative, and 53 positive for the SARS-CoV-2 virus.

The HCM City municipal Health Department on June 12 decided to lock down the hospital for contact tracing and disinfection.

During a working session with the hospital’s management on June 13, Deputy Minister of Health Nguyen Truong Son asked the Municipal Department of Health to arrange other hospitals to receive and treat COVID-19 patients.

Under the local health sector’s June 9 decision, the HCM City Hospital for Tropical Diseases has been transformed into a healthcare facility that specializes treatment for COVID-19 patients.

HCM City has confirmed more than 700 COVID-19 cases since the virus recurred in late April. Experts say though the fresh outbreak was brought under control, many cases have sporadically been detected in the community with unknown sources of infection.

The local administration has developed scenarios to receive up to 5,000 COVID-19 patients and place 10,000 people in quarantine. 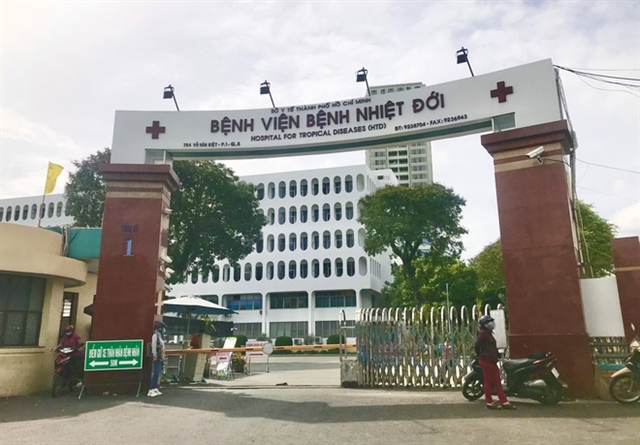 The HCM City Hospital for Tropical Diseases has been temporarily locked down. — Photo suckhoedoisong.vn

HCM CITY — The HCM City Hospital for Tropical Diseases has immediately begun preventive activities after a new case of COVID-19 was detected there.

The patient is an employee of the information technology department and tested positive for SARS-CoV-2 on Friday.

The hospital urgently implemented a rapid screening protocol and put plans in action to quarantine and take samples from all medical staff.

By Sunday morning, the hospital had completed RT-PCR tests for 887 employees and detected 53 positive cases for SARS-CoV-2.

The hospital also tested all 88 patients in severe departments such as tetanus, encephalitis, HIV/AIDS and chronic liver disease units. All of these tests were negative.

The 53 employees who are positive are currently quarantined and receiving treatment, with 52, who have been vaccinated, completely asymptomatic.

HCM City on Sunday loosened social distancing in Gò Vấp District after the COVID-19 situation there was put under control.

Leaders of the city requested the district authorities continue monitoring and ask people to make health declarations if they show symptoms of COVID-19. — VNS