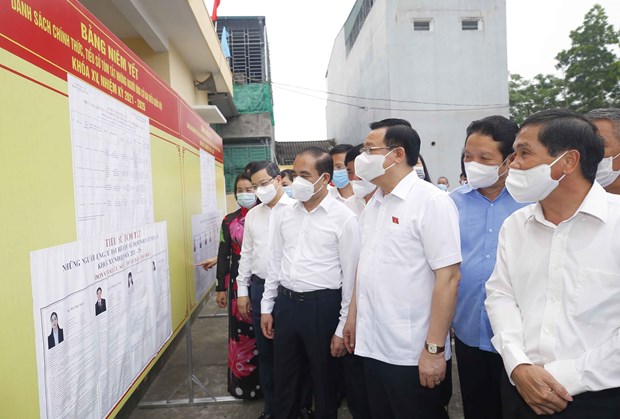 The elections of deputies to the 15th NA and all-level People’s Councils for the 2021-2026 tenure are slated for May 23.

The top legislator said Tuyen Quang province has been making good preparations and conforming with relevant legal regulations, noting that it must ensure absolute safety amid current complex developments of COVID-19.

He requested local authorities to finish handling complaints and denunciations related to candidates by May 13 while promoting IT application during the elections.

As the province is home to a large number of ethnic minority groups, Hue suggested it consider translating the documents related to the elections to the minorities’ languages.

At the working session with provincial leaders, the NA Chairman also recorded their proposals on public investment.

The same day, the leader, other members of the inspection delegation, and officials of Tuyen Quang province also presented gifts to 100 disadvantaged and low-income households in communes of Son Duong district./.

Local authorities are stepping up their preparation for the upcoming general elections, with public health being a priority amid serious Covid-19 situation in the city.

Every voter should exercise their responsibilities in casting ballots to ensure the worthy candidates are elected and able to contribute for the city’s socio-economic development.

Chairman of the Hanoi People’s Council and the city’s Head of Election Committee Nguyen Ngoc Tuan stressed the view while inspecting the preparation process for upcoming election of deputies for the 15 th National Assembly and all-level People’s Councils for the 2021-26 tenure at Hoan Kiem district today [May 6].

During the inspection, Vice Chairman of Hoan Kiem district People’s Council Nguyen Thi Phuong Chung said the total number of voters in the district is estimated at over 128,000, while a steering committee to oversee the preparation process has also been set up.

“From 96 polling stations in the locality, voters would choose 32 deputies for the Hoan Kiem district People’s Council,” Chung informed.

According to Chung, since May 3, all wards within the district have been publishing short bios of candidates running for the National Assembly and all-level People’s Councils for public review.

“Meetings between candidates and voters are set to take place from May 10-21 with strict anti-Covid-19 measures,” Chung stressed.

As the election day [May 23] is approaching, Chairman Tuan requested the local authorities to ensure a fair, transparent and successful process, so that only the right candidates should be elected.

On the same day, Vice Secretary of the Hanoi Party Committee and Deputy Head of the city’s election committee Nguyen Thi Tuyen also led an inspection team to check on the preparation process at Ba Dinh district.

“Every voter have rights to cast their ballots,” Tuyen noted, expecting the district’s authority to raise public’s awareness on the upcoming election.

“Strict measures against the Covid-19 pandemic are required to ensure election day – a great occasion for the society,” Tuyen added.

He is one of the 49 candidates distributed across the capital city’s ten constituencies, from which 29 will be selected for the 15th National Assembly.

President Nguyen Xuan Phuc will represent Ho Chi Minh City in a constituency that comprises the districts of Cu Chi and Hoc Mon while Prime Minister Pham Minh Chinh is a candidate in the Mekong Delta city of Can Tho.

Ho Chi Minh City will select 30 deputies for the 15th National Assembly from 50 candidates while Can Tho will pick 7 from 13 candidates.

In the meantime, National Assembly Chairman Vuong Dinh Hue will have the vote of constituents in the port city of Hai Phong, which will choose 9 deputies from 15 candidates.

Permanent member of the Secretariate Vo Van Thuong is one of the 10 candidates in Da Nang, from which six deputies will be elected.

The National Assembly election is scheduled to take place on Sunday May 23, when voters will also select their representatives for the People’s Councils at all levels.

In a guideline issued on May 4, Vice Chairman of the VFF Central Committee Ngo Sach Thuc urged standing boards of VFF chapters at all levels to coordinate with election committees at the same level to decide the number and the form for meetings with voters based on the situation in their respective localities.

Localities in normal state or under social distancing measures could hold conferences with voters either offline or online.

For localities under lockdown, local VFF committees should work with Party Committees and election committees at their corresponding levels to select the suitable methods to hold election campaigns, with priority given to campaigning via the mass media.

In case candidates are infected with COVID-19 or under quarantine, the standing boards must reach consensus with election committees on the way to organizing election campaigns, with priority given to campaigning via the mass media.

Throughout a five-step process with three rounds of close, democratic, cautious, and non-discriminatory consultations, the lists of candidates for the elections of deputies to the 15th legislature and all-level People’s Councils for the 2021-2026 tenure have been finalised.

Voters nationwide will cast their vote to choose 500 out of 868 candidates for the 15th National Assembly on May 23.

At a working session with leaders from Ha Giang and heads of the Election Committees of the province and Dong Van district, the top legislator lauded the efforts of the locality in preparing for the election, which have been conducted in line with regulations and made good progress.

He said he was impressed at the personnel work of Ha Giang, which meets requirements regarding the structure of candidates for election as deputies to the NA and People’s Councils at all levels.

The NA Chairman also suggested that Ha Giang carefully review its list of voters, thus ensuring the rights of all local residents, while providing a proper response to all complaints related to election activities and candidates.

He said from May 14, communications through mobile phones will be launched to remind voters to choose the best candidates to the NA and People’s Councils at all levels.

Along with preparing for the election, Ha Giang should also focus on boosting economic development and ensuring security-defence, especially along its shared border.

On the same day, Hue attended a flag hoisting ceremony at the Lung Cu flagpole.

He also visited the Lung Cu border post and witnessed the presentation of VND5 billion from the Bank for Investment and Development of Vietnam (BIDV) to Dong Van district’s General Hospital.

Earlier, on May 4, the top legislator and his entourage offered incense to martyrs at the Vi Xuyen National Cemetery for Martyrs, where 1,800 martyrs are laid to rest. He also presented gifts to 20 policy beneficiary families in Thanh Thuy commune, Vi Xuyen district.

Meanwhile, NA Vice Chairman Do Ba Ty on May 5 examined preparations for the upcoming elections in the south-central province of Phu Yen.

The province has also established election groups in localities, stepped up the communication work, and settled complaints and denunciations regarding the upcoming elections in line with regulations.

Candidates for the seats of deputies to the 15th National Assembly and all-level People’s Councils have met with voters. Meanwhile, the lists of candidates and voters have been announced.

Apart from measures to ensure security and order during the important political event, Kien Giang has drawn up a COVID-19 prevention and control plan.

Pointing out the high risk of COVID-19 infections as Kien Giang borders Cambodia that is facing a surge in cases, he the province to observe COVID-19 prevention and control regulations during the organisation of meetings between candidates and voters.