‘Bombs of seeds’ thrown by young people in the Central Highlands provinces of Dak Lak and Lam Dong carry the hope for reviving the deforested hills.

The initiative, kick-started in May, has become a new Internet sensation and inspired other people to follow suit in Vietnam.

According to Pham Quang Thai, a member of the Central Highlands Association for the Protection of Natural Resources and the Environment, each bomb contains soil mixed with organic fertilizer and rice husks wrapping seeds of plants with good vitality as well as high drought tolerance.

Before being thrown away, they are moistened to ensure seeds will germinate well, helping to recreate destroyed forests.

The group’s core members paid due attention to research and selected plants that could adapt to local soil before implementing the project.

They then carried seed bombs to drop at hills that were severely damaged by deforestation.

Based on local conditions, these seed carriers are spread by aircraft in some countries.

“In harsh areas, we dig holes to put seed bombs inside, creating favorable conditions for them to grow,” Thai explained.

Ha Vi, a 22-year-old from Dak Lak, said she found the activities interesting and meaningful.

“Wandering around hills to drop seed bombs is also a good way to exercise,” she said.

Pham Thanh Tuan, founder of Bo Cong Anh Social Enterprise in Dak Lak, said the project did not only help to revive forests but also sow good seeds of environmental protection to students and young people.

“Therefore, we want to integrate the activity into our tour packages to attract more people to participate,” he said.

Besides seed bombs, tourists also brought bare seeds and seedlings to grow plants under the guidance of local forest rangers.

“On each plant, we hang the ID code of the person who plants it,” said Tuan.

As the Central Highlands region has many indigenous fruit trees, the group plans to call for the contribution of local farmers to create a seed bank. Collected seeds will then be sown in forests.

“It is great that those seeds we plant today will grow strongly and cover bare hills,” said eleventh grader Phan Duy Nghia.

The company will have to prepare legal procedures regarding areas they can plant forests, Ta said.

However, he pinned high hopes on the activity’s positive impacts on local communities.

“I usually have forest trips to develop tour packages and get chances to work with forest owners and management boards,” he said.

“I look forward to bringing tourists to damaged forests to scatter seed bombs and lend a hand in re-growing them.”

Do Xuan Dung, deputy director of Dak Lak’s Department of Agriculture and Rural Development, said the initiative should be duplicated in different localities to save dying forests.

The integration of seed bomb spreading activity into tours also helps to spread this idea further.

“We have their back,” he said.

“If young people and enterprises want to approach forest owners and management boards, we can help them connect.” 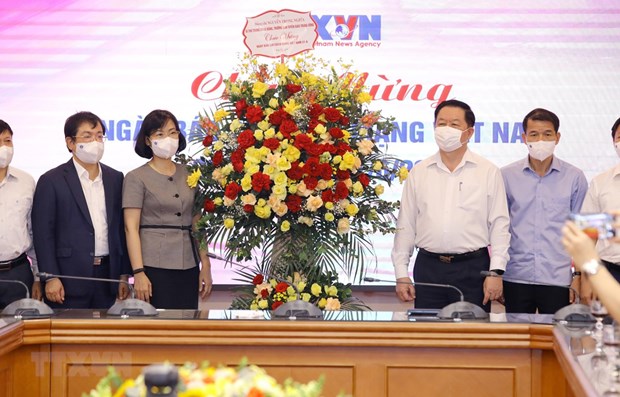 At the meetings with the agencies’ leading officials, Nghia lauded the press’s important contributions to the successful organization of major events of the country over the recent past such as the 13th National Party Congress, the elections of deputies to the 15th National Assembly and all-level People’s Councils in the 2021-2026 term, and the 131st birth anniversary of late President Ho Chi Minh.

Affirming the leading position of the four central-level press agencies in the Vietnamese revolutionary press system, Nghia appreciated their innovation efforts to enhance the quality of popularisation work.

He expressed his belief that the four agencies as well as other press outlets will continue promoting their glorious tradition, fulfilling their assigned tasks, contributing to building a modern, professional, humane and effective revolutionary journalism as the goal set out by the National Plan on Press Development and Management until 2025, and at the same time enhancing the country’s position and prestige in the international arena./.

The Secretariat of the Central Committee of the Communist Party of Vietnam has promulgated Directive 03, which has requested agencies financed by the State budget to priotize the use of Vietnamese goods.

The directive stated that, in order to further promote the implementation of the campaign “Vietnamese people use Vietnamese goods”, the Secretariat requests to further improve the responsibilities of party committees at all levels and organizations in leading and directing the implementation of this campaign; and to uphold the responsibility of setting an example of party members, especially leaders in using Vietnamese goods.

Agencies using state funding must prioritize the use of Vietnamese products, goods and services in accordance with international commitments and Vietnamese laws, the directive says.

Relevant agencies are responsible to review, amend, supplement and perfect policies and laws to create a favorable legal corridor to support Vietnamese enterprises – first of all, the small and medium ones and digital technology enterprises to participate in the production chain of high-quality goods and services; and to have policies to protect the domestic goods distribution market in line with international commitments.

IT application and e-commerce development

In the directive, the Secretariat asked for promotion of Vietnamese products and domestic enterprises in domestic and foreign markets, especially markets where Vietnam has signed a Free Trade Agreement (FTA); and the application of information technology, and development of e-commerce and modern trade channels. 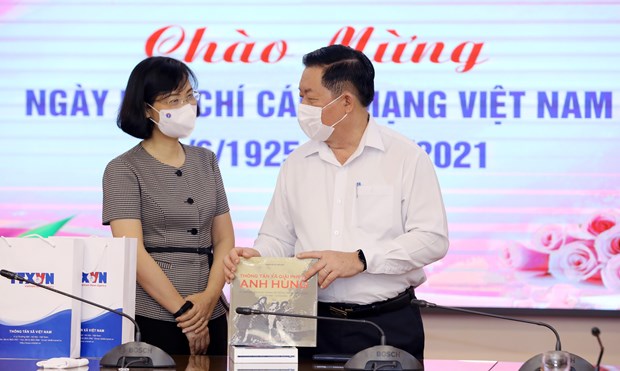 Visiting the VNA headquarters in Hanoi, Nghia, who is also Secretary of the Party Central Committee, commended the agency on its recent achievements, noting that it has always upheld its role as the leading news agency of Vietnam that is comparable with regional and international peers.

He expressed his hope that the VNA will remain one of the units taking the lead in implementing the Party’s guideline and the Government’s plan on the press planning and management.

Welcoming the Party official, VNA Deputy General Director Vu Viet Trang said throughout its 76-year history, the staff of the agency have stayed faithful to and upheld its responsibility towards the Party and the people, thereby contributing to the country’s revolution.

She noted that the VNA hopes to continue receiving attention and directions from the Information and Education Commission’s leader as well as press management agencies so as to better fulfill its assigned tasks and deserve the trust and noble rewards granted by the Party and the State./. 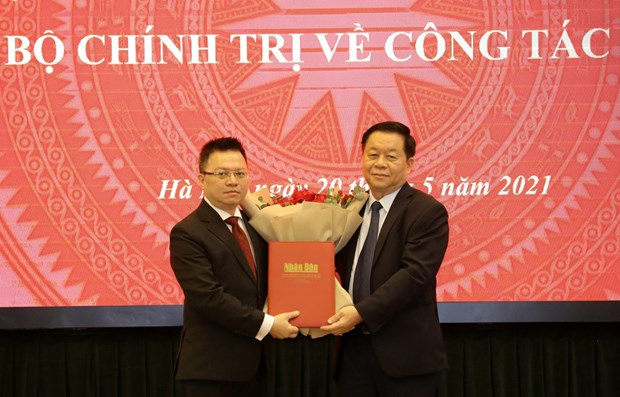 Chairman of the Party Central Committee’s Commission for Information and Education Nguyen Trong Nghia (R) hands over the Politburo’s decision to Le Quoc Minh on May 20 (Photo: VNA)

Hanoi (VNA) – Le Quoc Minh, member of the Party Central Committee, Secretary of the Party Committee and Deputy General Director of the Vietnam News Agency (VNA), has been appointed as Editor-in-Chief of the Nhan Dan (People) Newspaper.

The Politburo’s decision to relieve Minh from the post of VNA Deputy General Director and appoint him to the new position was handed over on May 20 by Nguyen Trong Nghia, Secretary of the Party Central Committee and Chairman of its Commission for Information and Education.

At the ceremony in Hanoi, Nghia said the Nhan Dan Newspaper is the central organ of the Communist Party of Vietnam and also the mouthpiece of the Party, State, and Vietnamese people.

It is one of the leading press agencies in the country that has always excellently fulfilled its tasks and been honoured with many noble rewards.

Those achievements are attributable to generations of its staff, including the editorial board, especially the Editor-in-Chief, he noted.

Nghia thanked former Editor-in-Chief Thuan Huu for his contributions to the revolutionary press of Vietnam as well as the Party’s popularisation and education work.

Congratulating Minh on his appointment, Nghia expressed his hope that the new Editor-in-Chief of Nhan Dan will build on the obtained achievements and join the newspaper’s editorial board to uphold its 70-year tradition and promote communication effectiveness.

For his part, Minh said he wishes to receive support from the editorial board and the entire staff of the newspaper so that Nhan Dan will remain the voice of the Party and State./. 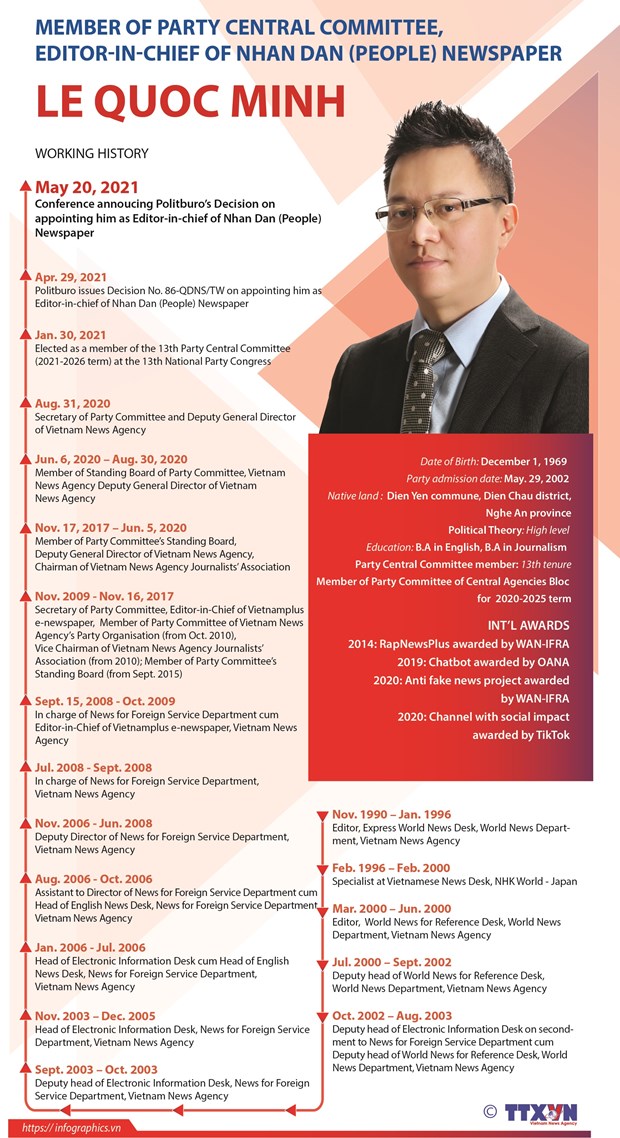 On the same day, the Ministry of National Defense, the Ministry of Public Security and the governments of provinces and cities also received a similar dispatch from the ministry that called on them to accelerate the vaccination.

The ministry asked the National Institute of Hygiene and Epidemiology to quickly allocate doses of Covid-19 vaccine to the relevant agencies prior to June 18 so that the inoculation program runs smoothly.

The provinces and cities were told to deploy the vaccination program as soon as they take delivery of the Covid-19 vaccine doses and get it done before August 15 this year.

The task force will be in charge of treating Covid-19 patients, keeping a close watch on the development of Covid-19 as well as testing and quarantining suspected cases in HCMC.

As of June 14, the total number of doses of Covid-19 vaccine administered to people nationwide had reached over 1.49 million, with some 55,270 people getting two shots.