Cement producers have increased prices by VND30,000-40,000 (US$1.31-1.74), according to Luong Duc Long, vice president and general secretary of the Vietnam Cement Association.

Sai Gon Food Joint Stock Company hiked prices by 5-15 per cent in the first and second quarters, and the rise in the third and fourth quarters might reach 25 per cent, its representative said.

Nguyen Quoc Anh, director of Duc Minh Rubber Company Limited and chairman of the HCM City Rubber and Plastic Association, said rubber prices are up 60 per cent, and enterprises are planning to hike product prices by 5-10 per cent, but if the cost rises continue in the next two months, 25-30 per cent hikes are likely.

“None of our orders in the first quarter was profitable. It is difficult to get foreign partners to agree to price hikes; they usually ask for further monitoring and renegotiation.”

With domestic supply only meeting 25-30 per cent of demand, the dependence on imported raw materials has lasted decades, according to Tran Viet Anh, vice chairman of the HCM City Association of Enterprises and general director of the Nam Thai Son Import – Export Joint Stock Company.

Many enterprises are working to cut costs and renegotiate contracts.

Some are hesitant about finalising prices for next year’s orders.

“Production cannot be interrupted, and enterprises must thus make use of all raw materials in stock while waiting for further developments,” Anh added.

The major increase in prices is merely due to a cyclical upturn in the commodity market, Deputy Minister of Industry and Trade Do Thang Hai said.

According to the latest survey from IHS Markit, Vietnam’s industrial output growth was at a 20-month high, with a sharp rise in new orders and export sales leading to stronger rises in employment and buying activity.

The Vietnam Manufacturing Purchasing Managers Index increased to 53.6 in March from 51.6 a month earlier, the fourth straight month of expansion in manufacturing sector and the strongest pace since December 2018.

Difficulties in sourcing raw materials persisted, with suppliers’ delivery times continuing to lengthen. But vendor performance fell the least in four months, and firms were able to expand their stocks.

Output prices rose at the sharpest pace in over four years.

This is the second year Vietnam exported such a record-high volume, listing itself a leading cement exporter.

Vietnam is estimated to have exported 34 million tons (Mt) of cement and clinker in 2019, up 6.25% from a year earlier, according to the Department of Import-Export under the Ministry of Industry and Trade (MOIT).

This is the second year Vietnam posted such record-high cement exports.

The exports have surpassed the Ministry of Construction (MOC)’s estimated figure at the beginning of 2019 by US$100 million-US$150 million.

In terms of capacity, the country will have two more cement production lines to raise the total to 86 with a combined installed capacity of 106Mt/year in 2020, according to the MOC.

The Ministry of Natural Resources and Environment has told local authorities to inventory land and report on land use.

The Vietnam Land Administration has been asked to inspect land management in 26 provinces and cities where prices for land have increased dramatically.

Specifically, inspectors will work with authorities in the 13 provinces of Dien Bien, Lai Chau, Hoa Binh, Ha Giang, Bac Ninh, Lang Son, Binh Dinh, Kon Tum, Kien Giang, An Giang, Vinh Long, Ba Ria – Vung Tau, and Long An on issues of management and use of land for rice cultivation; and the changing of land-use purposes, particularly the use of land for rice cultivation, protective forest land, and special-use forests to implement projects that were approved by the Prime Minister before July 1, 2014.

In Binh Thuan, the implementation of land valuation, acquisition, compensation, assistance, resettlement and land fund development will be examined.

In Hai Phong, the observance of the land law in land registration, grant of land-use right certificates, and change of land-use purpose will be inspected.

In Hanoi, the observance of the land law in land registration, granting of land-use right certificates, changing of land-use purpose, and use and management of land in a number of projects, works will be considered.

In Ho Chi Minh City, inspectors will examine the issues of management and use of land for rice cultivation; the changing of land-use purpose, particularly the use of land for rice cultivation, protective forest land, and special-use forests to implement projects that were approved by the Prime Minister before July 1, 2014; and the registration and issuance of certificates of land-use rights, ownership of houses and other land-attached assets in some housing development projects.

Regarding the sharp rise of land prices in many provinces recently, Phan said that the Land Administration had requested local governments to rectify land “fever”, through public information on land-use planning and land prices. After some provinces made public the information, the land fever showed signs of cooling.

On March 30, the Ministry of Natural Resources and Environment requested provinces and centrally-run cities to strengthen and reorganize the state management of land prices.

According to a recent survey by VnExpress , land prices in five districts of Binh Chanh, Nha Be, Hoc Mon, Cu Chi, and Can Gio in HCMC, have been moving sideways for the last four weeks or so after increasing by 3-20 percent in the first quarter.

In mid-April, a few transactions took place in Can Gio, Nha Be and Binh Chanh at prices higher than in late March, and otherwise they remained unchanged.

In the southern provinces of Long An, Binh Duong and Dong Nai, prices have remained the same since March-end. In Dong Nai the transactions mainly involved townhouses.

The three also saw a few deals at prices 2-3 percent lower than in late 2020.

In Binh Phuoc, the “fever” in late February and early March also cooled down within two weeks. In April, many real estate agents offered lands at 30-40 percent lower than during the peak period.

The market for lands and land-related assets in the coastal tourist destinations of Ba Ria – Vung Tau, Phan Thiet, Khanh Hoa, and Da Nang too did not change much in April.

In the north, land prices around Hanoi and its neighboring provinces remain flat as people become cautious.

Hoc, a property broker, said the number of phone inquiries about lands has reduced from dozens a day to just a few now. “Many people even took back their deposits.”

Nguyen Quoc Anh, deputy director of real estate site Batdongsan, said land prices are leveling off after the sharp rise in the first quarter caused by the shifting of cash flows from the stock market and the spread of rumors about development plans or status upgrade to town or city.

A “fever” like that only lasts one or two months usually, he added.

Nguyen Van Dinh, general secretary of the Vietnam Association of Realtors, said the market has stabilized again thanks to the government’s efforts.

“As the government monitored and issued warnings, investors started to calm down, causing the market to cool down,” he said.

The State Bank of Vietnam is tightening lending to the property sector.

The government is developing social housing to provide people with places to live, especially for workers in industrial zones.

The Ministry of Natural Resources and Environment has ordered the administration to examine land administration procedures in 26 provinces and cities.

The ministry has urged local governments to publicize information about the progress of housing and infrastructure projects to prevent rumors.

But experts said there would be no sell-off.

Anh pointed out: “Buying land is a long-term investment.” He was certain the market would continue to move sideways for the next two quarters. 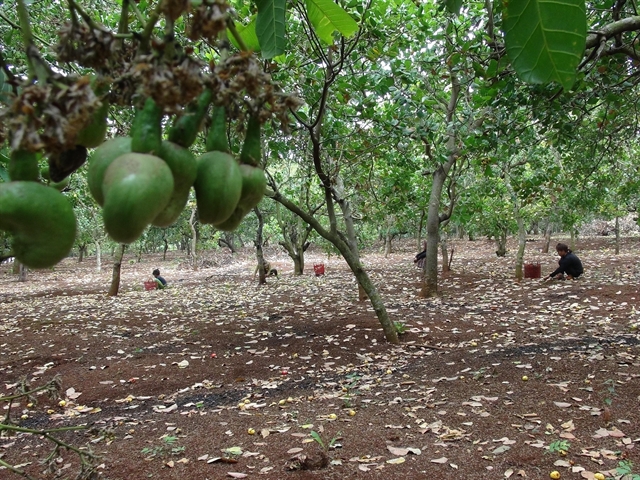 HCM CITY — Cashew farmers in the country are facing a poor harvest due to bad weather and low prices because of low international demand.

In the south-eastern province of Bình Phước, the country’s largest producer of the nut, yields are down significantly after heavy rains during the flowering period in February affected fruiting.

Her harvest was insignificant this year, she said.

Bù Đăng District accounts for a third of the province’s cashew growing area at nearly 59,000ha.

Nguyễn Huy Long, head of the district Bureau of Agriculture and Rural Development, said the yield was expected to be low this year at just 1.1 tonnes per hectare.

In the Tây Nguyên (Central Highlands) province of Gia Lai, cashew is a key crop in border districts like Đức Cơ and Ia Grai and provides a reliable income for farmers, especially ethnic.

But this year there too the harvest has been poor because of the weather and diseases.

According to Phan Đình Thắm, head of the Ia Grai Bureau of Agriculture and Rural Development, the cashew yield depends largely on the weather, especially at the time of flowering.

Due to the unseasonable rains the yield is expected to be 20-30 per cent down from last year.

Ia Grai has 5,700ha under cashew and plans to maintain this area in the coming years.

In the southern province of Bà Rịa-Vũng Tàu, farmers have harvested this year’s cashew later than normal and the yield is 30-50 per cent down because of hoar frost, cold weather and infestation by mosquito bugs, according to local farmers.

Besides, farmers are also facing low prices since traders have reduced buying because of off-season rains, which means they cannot dry the nuts and their quality will decline.

Besides, cashew processors have also reduced purchases because of a fall in export demand due to the COVID-19 pandemic.

The Bà Rịa-Vũng Tàu Department of Agriculture and Rural Development is working with the Southeastern Fruit Research Institute to create new strains to supply farmers.

It has organised training for farmers in disease management and advanced farming techniques.

Trần Xuân Khải, deputy head of the Gia Lai Sub-department of Plant Protection and Cultivation, said his agency had reviewed unproductive cashew areas and plans to switch to other suitable crops like fruits and medicinal plants there in consultation with farmers.

It would instruct farmers to grow 9,000-10,000ha of cashew using intensive methods.

Bình Phước Province has support policies to enable farmers to increase yields and set up co-operatives that link up with processors to produce high-quality cashew for exports.

It also helps processors build brand names, get soft loans and tie up with farmers to set up clean cashew growing areas. — VNS 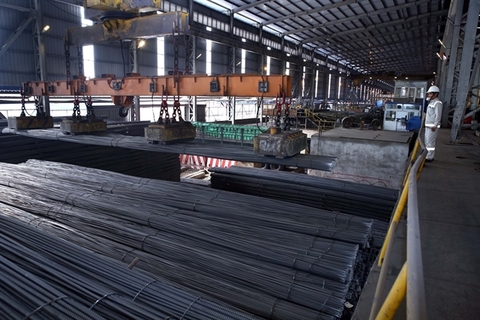 Prices of construction materials such as steel, bricks and sand are recovering post-pandemic, hitting contractors’ profits.

Cao Van Hong, a contractor, told Thanh Nien newspaper that the cost of construction materials had been rising for the last few months.

Associate Professor Ngo Trí Long, former rector of the Ministry of Finance’s Price and Market Research Institute, said prices were up by around 20 per cent year-on-year.

Steel, which accounts for 20 per cent of the cost of a building, has increased by 40 per cent.

Construction sand is becoming scarce in the Mekong Delta, a major supplier, and buyers wanting large quantities have to wait for a month and often pay more than the originally quoted price.

Le Nhu Thuy My, director of the Nhan Quoc Ceramic Tiles Company in Dong Nai Province, said there had been a slight increase in ceramic tile prices due to a rise in packaging costs and the rising electricity, petrol, coal, and transportation costs.

The spike in costs is forcing contractors to increase prices or delay work to prevent losses.

Nguyen Quoc Hiep, chairman of the Viet Nam Association of Construction Contractors, said many contractors signed fixed-price contracts and so took a hit when costs rise.