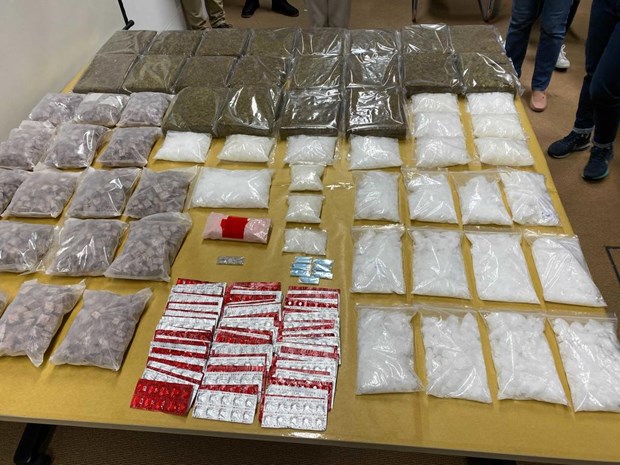 The drugs seized in the Central Narcotics Bureau’s latest bust were enough to feed more than 10,000 abusers for a week. (Photo: VNA)

Hanoi (VNA) – The Central Narcotics Bureau (CNB) of Singapore has recently announced that it had seized the biggest amount of cannabis in 14 years during this week’s drug bust.

The seizure is the biggest since the authorities confiscated 20.6kg of the illegal drug in 2007.

Aside from cannabis, the two-day operation netted about 8.3kg of heroin, 6.4kg of crystalline methamphetamine, 1,091 Ecstasy tablets, and 1,000 Erimin-5 tablets.

Three men aged from 27-33 were arrested during this operaion.

In Singapore , anyone who smuggles more than 500g of cannabis can be sentenced to dealth./.

Police are investigating a 54-year-old Canadian national who they say grew hundreds of cannabis plants at a home belonging to his Vietnamese wife.

On Wednesday afternoon, police officers in Phan Thiet City, Binh Thuan Province inspected the residence of Hoang My Hanh, 31, where they found 476 cannabis plants which she said had been planted by her Canadian husband Glen Jeffrey Evans.

Evans said he had been farming the plants for medicinal purposes and showed officials a permit issued by the Canadian government to grow no more than 25 cannabis plants.

The permit, however, holds no validity in Vietnam.

An investigation into the case is ongoing.

According to Vietnamese law, growing cannabis is punishable by a fine of VND2-5 million (US$84-211) if the number of trees is under 500.

A total 476 cannabis plants were seized as evidence, the tallest ones at around two meters, local media reported.

Evans said he had cultivated the plants as medicine, providing a slip issued by Canadian authorities stating he was allowed to plant no more than 25 cannabis trees for this purpose. However, the document holds no legal value in Vietnam.

An investigation is ongoing.

Cannabis is on the list of narcotics forbidden in Vietnam. Those growing cannabis in small scale could be fined VND2-5 million ($86.16-215.40). Farmers found cultivating 500 to 3,000 plants could face jail terms of six months to three years, while those working on bigger scale could spend up to seven years in jail.

Worldwide, increasing numbers of countries and localities are legalizing medical or recreational use of marijuana, including almost 40 states in the United States.

E-cigarettes, called Vape or new-generation cigarettes, will cause serious harm to young generation in Vietnam.

The use of e-cigarettes once again heated up the National Assembly agenda as policymakers emphasized the harmful effects and consequences of e-cigarettes, which are being widely circulated and used in Vietnam.

Giving a view at the 14th National Assembly’s final session in Hanoi on March 24, Nguyen Anh Tri, a delegate from the capital city, said there were many catastrophic accidents caused by drivers who were addicted to drug while driving vehicle.

“There should be specific provisions in law,” Tri said to National Assembly delegates who were discussing draft amended Law on Drug Prevention and Control.

Tri said that the use of e-cigarettes is spreading very quickly in the country, especially targeting to young people, thus causing serious harm to younger generations in the future. E-cigarettes are the fastest way leading the smokers to drugs “so it is necessary to ban it, do not let it grow and then deal with its consequences in the future.”

He said many countries in the world have condemned and proposed an absolute ban of e-cigarettes due to its harmful consequences, so that the Vietnamese National Assembly and Government should immediately ban the use and trading of e-cigarettes in the country for the shake of a better living.

“Please do not delay. If we are late, we will have to pay a heavy price by the people’s destroyed health and then a huge amount of money to stop such a kind of human killing called e-cigarettes,” Tri said.

Delegate Pham Trong Nhan from the southern province of Binh Duong said in some cases, the decisions given by authorities, not know whether accidentally or intentionally, have created more loopholes in the legislation while the country is facing with many difficulties in the fight against drug.

He showed a proof that the Ministry of Science and Technology last December issued Decision 3485 announcing the national standards for heated tobacco products (HTPs), a product combined between electronic equipment and tobacco products. The decision was made while there is not any assessment on the HTPs’ impacts on the society, especially people’s health and the possible mixture of e-cigarettes and drug.

“More importantly, the Government leader has not yet had any regulation allowing the circulation of HTPs, but it has been put into the national standards. “Is it just because of its ‘beautiful’ name as being the new-generation cigarettes, or is there any other reason?”, Nhan said.

He added that 24 countries have completely banned e-cigarettes, while 17 others prohibited HTPs and a majority of ASEAN countries have enacted regulations banning the new-generation cigarette products.

In Vietnam, although the smoking of e-cigarettes is a forbidden behavior by many schools, a number of students still smoke after getting out of the school gate, even at the school. They are interested in a new ‘experience’ and style rather than its harm to health.

He said the school has built a plan to prevent the use of cigarettes and Vape. Beside 37 surveillance security cameras installed throughout the school, teachers and staff are assigned to observe students. “In cases where there are signs of violation, we will work with families to educate students about the dangers of using drugs and tobacco in general, and Vape in particular.”

Vape firms have launched a lot of products with cheap prices to lure people.

A survey of Kinh te & Do thi Newspaper showed that people can easily find and buy Vape products on social networking sites. At some online stores, Vape products are disguised in the form of ballpoint pen, luminous pen, USB and lipstick with various flavors of strawberry, orange, mango, melon, watermelon and milk tea. They are publicly sold at the very cheap price of VND120,000-150,000 per unit.

According to WHO expert Nguyen Tuan Lam, almost Vape products contain poisonous substances such as nicotine, metal and formaldehyde. “As for adolescents, nicotine numbs the senses and causes loss of control, poor concentration and impaired memory.”

Lam said that the young people, who have tried vape, are possible to start using traditional cigarettes 3.5 times higher than those who do not. There are 15,000 flavors in Vape with some ingredients making addicted quickly, including cocaine and cannabis. “Vape is harmful to both users and surrounding people, in addition to a risk of serious injury due to battery explosion.”

A WHO global student health survey conducted in 21 cities and provinces of Vietnam in 2019 revealed that the rate of using Vape smoking among students aged 13-17 started to increase to 2.6% of the total, about 20 times higher than previous years.

— Vietnam’s newly-elected National Assembly chair is scheduled to take the oath of office during the legislature’s 11th sitting in Hanoi on Wednesday morning.

— No COVID-19 cases were reported in Vietnam on Wednesday morning, while more than 48,200 people have received COVID-19 vaccination so far in the country. The COVID-19 tally stood at 2,594, with 2,359 recoveries and 35 deaths, according to the Ministry of Health.

— An inferno engulfed a parking lot managed by traffic police officers in Thu Duc City, Ho Chi Minh City on Tuesday night. There were no casualties reported but many motorbikes were burned down.

— A 13-year-old girl from the Mekong Delta province of Long An attempted to commit suicide by drinking insecticide after she was boycotted and cyberbullied by her classmates.

— A 23-year-old man was sentenced to death on Tuesday for possessing and trading nearly four kilograms of crystal meth in the north-central province of Ha Tinh. He was also condemned to 18 years in prison for offering a VND3 billion (US$129,900) bribe to police officers.

— The Ministry of Public Security confirmed on Tuesday it had broken up an online gambling ring worth more than VND400 billion ($17.3 million) and arrested 15 suspects.

— Police in the northern province of Lang Son said on Tuesday they had initiated legal proceedings against a 72-year-old woman for growing over 600 cannabis trees at her son’s house.

— Three defendants from the south-central province of Khanh Hoa have been sentenced to five to nine years in jail for “making, storing, distributing, or disseminating information, documents, and items against the state,” according to the Vietnam News Agency.

— Vietnam’s state budget revenue managed by tax agencies was estimated at VND347.34 trillion VND ($15 billion) in the first quarter of 2021, equal to 31.1 percent of the target and down 1.2 percent year-on-year, according to the General Department of Taxation.

— Vietnam reported 11 imported cases of COVID-19 and seven recoveries on Wednesday afternoon, bringing the national tally to 2,659 infections, with 2,429 recoveries and 35 virus-related deaths, according to the Ministry of Health’s data.

— While the African swine fever situation remains complicated in Vietnam, many pig farmers in north-central Nghe An Province have been found dumping dead swine into local rivers and canals.

— The inspectors of the Hanoi Department of Agriculture and Rural Development recently found workers injecting impurities into raw shrimp at a shrimp processing facility in Hoang Mai District, which provides several metric tons of shrimp for restaurants in the city every month.

— Police in Phan Thiet City in south-central Binh Thuan Province have handled a 54-year-old Canadian man, who grew 476 cannabis plants at his Vietnamese wife’s house. The man said he farmed the prohibited plants to use them as medicine and showed a license allowing the planting of no more than 25 cannabis plants for treatment issued by authorities in Canada.

— The Ho Chi Minh City Department of Transport said it would ban traffic on Nguyen Binh Khiem and Le Duan Streets in District 1 from 12:00 pm April 10 to 12:00 pm the next day for the organization of the fourth edition of the Techcombank Ho Chi Minh City International Marathon.

— Vietnam’s electricity output mobilized from gas-fired and coal-fired thermal power plants must be cut by 12-21 percent in the first quarter of this year compared to 2020 because solar power production soared by up to 180 percent, state-run Vietnam Electricity (EVN) said in a press release on Wednesday.

— A VND42 billion (US$1.82 million) vegetable and fruit processing factory was put into operation in Muong Khuong District in northern Lao Cai Province on Wednesday, the Vietnam News Agency reported.

— The first World Press Photo Exhibition in Ho Chi Minh City presenting a selection of the most important events from 2018 to 2020 was opened by the Netherlands Consulate General in the city and the municipal authorities on Wednesday evening.