Nguyen Hong Trang’s family in Vinh My A commune in Bac Lieu province raises pigs. More than a year ago, her sow gave birth to 11 baby pigs, one of which weighed only two kilos. As it could not suckle much, it stayed small. 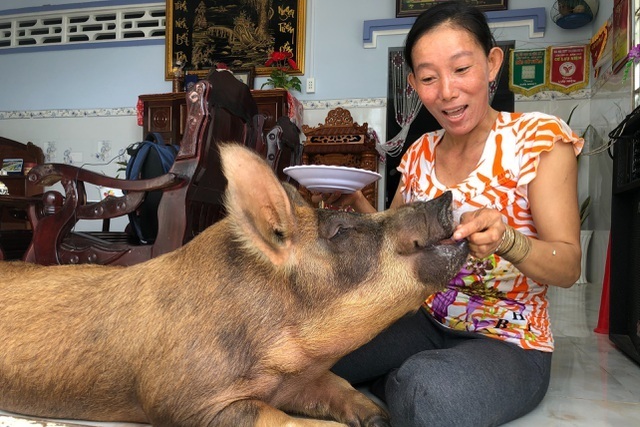 Trang felt sorry for the pig and decided to keep it beside her for better care. She named the pig Ut Det. The pig became close to Trang’s family and now weighs 50 kilos. It likes to sleep in a cool room with an electric fan. The pig eats fish, shrimp, sweets and fruits, and is bathed carefully by Trang and her husband with soap every day for 30 minutes.

Local farmers believe that shrimp with such a color is rare, saying that it will bring good luck. The shrimp is being kept by Hoang’s family.

In Binh Dinh province, ca nien, or Onychostoma gerlachi, can be found in only two mountainous districts An Lao and Vinh Thanh.

This fish lives in rivers, especially at the foot of waterfalls. It is very special: they only gather, live and breed in the upper area of swift-flowing rivers.

Ca nien has a flat body. The large fish is 20 cm long and is as big as two adult fingers. They only eat algae, so the flesh is delicious, clean and nutritious.

“Mong Coc dogs are loyal and agile, so they can work as guard dogs very effectively. These dogs are very precious and considered by Mong people as a ‘God of Wealth’,” Duong said.

His dog has attended competitions for rare and precious dogs in cities and provinces where it won first and second prizes.

Some people want to buy the dog for VND200 million. But Duong has kept it to develop a family-run precious-dog farm.

N.C.C. in Son Ham commune of Ha Tinh province is the owner of a deer with huge antlers weighing four kilograms.

C bought the deer from a farmer six years ago. In the first two years, the antlers grew normally but in recent years their weight increased very rapidly.

Easing monetary and fiscal policies in combination with institutional reforms are the way for Vietnam to ensure sustainable and rapid economic growth amid global uncertainties.

Breakthroughs in institutional reform along with easing monetary and fiscal policies would help Vietnam’s GDP growth to average 6.76% in the 2021-2023 period, with the growth rate this year of around 6.47%.

Head of the General Research Department under the Central Institute for Economic Management (CIEM) Nguyen Anh Duong revealed the first out of three growth scenarios set up by the agency in a conference under the Australia supports Vietnam’s economic reform program (Aus4Reform), discussing efforts to boost Vietnam’s economic growth in the post-Covid-19 pandemic on April 22.

“This is the best way for the country to ensure sustainable and rapid economic growth amid global uncertainties,” Duong noted.

In a second scenario when the government only focuses on easing monetary and fiscal policies, the economic growth would be 6.32% in 2021, slightly lower than that of the first scenario, and eventually reach the rate of 6.69% for the 2021-2023 period.

“However, inflation as a result of these policies would mean higher inflation, which is 3.78%,” Duong added.

For the least optimistic scenario with an assumption of minimizing intervention of fiscal and monetary policies, the CIEM forecast Vietnam to achieve a GDP growth of 5.98% for this year and around 6.35% for the next three-year period.

CIEM’s Director Tran Thi Hong Minh said while Vietnam is among the countries that have successfully reopened the economy on the back of effective Covid-19 containment, “it needs a long-term development plan to nurture driving forces for continuing reform.”

For this year, the CIEM’s expert suggested the necessity to maintain effective Covid-19 fight, address concern for businesses and people affected by the pandemic, and push for economic reforms.

In 2022, the government should combine economic recovery with institutional reform, and one year later, to gradually withdraw supporting policies for the economy and shift focus on reform.

Giving a more detailed proposal on economic reform, economist Le Dang Doanh told Hanoitimes that digital economy should be the priority for Vietnam in short-term.

“Institutional reform should go hand in hand with promoting digital economy, as e-government could minimize direct contacts and enhance transparency in the process of realizing administrative procedures,” Doanh noted.

“In a rapidly changing world, local enterprises without digital transformation would face difficulties in taking part in value chains of multinationals,” he suggested.