The Ministry of Health is still trying to secure more vaccine sources, he told a press meet Wednesday. Certain countries, for example Japan, have agreed to transfer Covid-19 vaccine production technologies to Vietnam, he added.

“I will visit Japan while the deputy minister Truong Quoc Cuong will go to Russia to negotiate over vaccines,” Thuan said, without sharing specific schedule.

The World Health Organization (WHO) and its partners have also agreed to transfer technologies for vaccine production to Vietnam, and the ministry is set to discuss the matter further with WHO within this month.

Domestically developed Nanocovax by Nanogen, set to enter its third phase of human trials, may receive the health ministry approval halfway through this trial should Covid-19 resurface in Vietnam, Thuan indicated.

Late last month, it was announced Nanocovax would undergo its third phase of human trials from May 5 to the end of June, involving around 10,000 volunteers.

“Some people believe vaccine passports should only be used once herd immunity is achieved by vaccination,” Thuan noted, adding the ministry would inform the government on what should be an appropriate timeline to apply such passports.

As of Thursday, over 675,000 people in 48 cities and provinces have been vaccinated. Vietnam has received about a million doses so far, either through commercial contracts or Covax.

The country aims to secure 150 million doses to cover 70 percent of its population by next year.

Deputy Health Minister Do Xuan Tuyen on Sunday warned local authorities about the rising number of new Covid-19 community transmission cases as well as infection threats in many localities, with tourists flocking to popular destinations amid the four-day national holiday (April 30-May 3).

Those that do run such events must ensure people strictly follow Covid-19 preventative measures, especially wearing masks in public. Those venturing out without masks should be punished, the ministry stated.

Many provinces and cities across the country like Tuyen Quang, Yen Bai, Nam Dinh, Hai Phong, Ha Nam, Hanoi in the north, and Ho Chi Minh City in the south have already closed non-essential services like bars, discotheques, internet stores, and karaoke parlors.

After over a month without new community transmissions, 16 new cases have been confirmed by the health ministry since Thursday in four localities including ten in Ha Nam Province, three in Hanoi, two in northern Hung Yen Province, and one in HCMC, all linked to a Ha Nam man who returned from Japan and tested positive two days after completing two-week quarantine.

Vietnam logged three domestic infections on Friday morning, all linked to a man who had returned from Japan and tested positive after finishing centralized quarantine.

Two of the new patients were logged in Hung Yen Province and one in Hanoi, the Ministry of Health said in a report the same morning, when the country starts celebrating Reunification Day.

The case in the capital city had come into direct contact with a 28-year-old man, coded patient No. 2,899, at a party in Ha Nam Province.

One of the two patients, a two-year-old girl, in Hung Yen had also been exposed to patient No. 2,899.

The other case is the girl’s grandmother, who frequently had direct contact with her.

Patient No. 2,899 was confirmed on Thursday, at a time when Vietnam had gone 33 days without any community transmission.

He landed in Da Nang on board flight VJ3613 on April 7 and was sent to centralized quarantine upon entry.

The patient finished his quarantine on April 21 after having tested negative for the novel coronavirus three times.

Two days later, he coughed, ran a fever, and had a sore throat before testing positive for the first time in the province on Wednesday.

His retest returned positive in Hanoi one day later.

His parents, wife, and daughter were diagnosed with COVID-19 on Thursday.

Another man who lives in Ho Chi Minh City and had come into close contact with him was also confirmed as a coronavirus case the same day.

Vietnam has registered 2,914 COVID-19 patients, including 1,580 locally-transmitted cases, since the pathogen first struck the nation on January 23, 2020, according to the health ministry’s data.

Recoveries have hit 2,516 while 35 patients have died, most having suffered critical pre-existing conditions.

The Southeast Asian country has administered the first shot of AstraZeneca vaccine to more than 504,000 people, including over 78,400 on Thursday, since it rolled out mass immunization on March 8.

On Friday, Vietnamese begin celebrating Reunification Day and International Workers’ Day (May 1) in a long holiday weekend that will stretch through Monday.

People from urban regions are coming back in droves to their hometowns as always, despite COVID-19 risks.

Health authorities have warned of a possible fourth wave of infections in Vietnam as the virus is taking a toll on its neighbors Cambodia, Laos, and Thailand.

As of January 3, 34 countries recorded the mutated SARS-CoV-2. The WHO announced that the new variant could spread about 50% to 70% faster than previous forms of the virus.

The Vietnamese Ministry of Health has proposed Prime Minister Nguyen Xuan Phuc to stop operating and restrict licensing flights to Vietnam from countries and territories infected with a new variant of SARS-CoV-2.

According to the Health Ministry’s report, Covid-19 pandemic keeps expanding in many countries. On December 18, 2020, the World Health Organization (WHO) announced a new variant of the SARS-CoV-2 in the UK could spread about 50% to 70% faster than previous forms of the virus. As of January 3, 34 countries recorded the new variants of SARS-CoV-2, according to the Ministry of Health.

So far, more than 40 countries have suspended travel to and from the UK, and countries that have recorded new variants of SARS-CoV-2.

In Vietnam, a Vietnamese woman returning from the UK was found to be infected with the mutated SARS-CoV-2. She arrived together with 305 passengers on Vietnam Airlines flight VN50 that landed in the southern city of Can Tho on December 22, 2020.

She was confirmed on January 2 as the first case of the new mutant coronavirus in Vietnam. She is in stable health condition after being quarantined at a hospital in the southern province of Tra Vinh.

Currently, Vietnam has only allowed arrivals of foreign diplomats, businesses and highly-skilled workers.

HÀ NỘI — Staff working at Sunny Club in the northern province of Vĩnh Phúc contracted the Indian variant of coronavirus, the health ministry said on Tuesday.

The National Institute of Hygiene and Epidemiology took samples of COVID-19 patients in Vĩnh Phúc, Hà Nam, Hưng Yên and Hà Tĩnh provinces to trace the origin of the virus.

Samples taken from three female staff of Sunny Club showed they had contracted B.1.617.2, the Indian variant, known as a ‘double mutant’, which has been found in at least 17 countries.

They are among six bar staff confirmed as having COVID-19 last week after being in close contact with a Chinese expert who came to the bar and tested positive earlier.

Six samples in Hà Nam, two in Hưng Yên and two in Hà Tĩnh (taken from two patients traveling from Laos to Việt Nam by road) showed they were infected with UK variant B.1.1.7.

The health ministry on Tuesday morning reported a man living in Hà Nội, who was on the same flight as two Chinese experts, tested positive for SARS-CoV-2.

Associate Professor Trần Đắc Phu, a senior advisor at the Public Health Emergency Operations Centre, said a case deemed to have had close contact with an infected person on a flight is someone sitting within two rows of that person. The man in Hà Nội indeed sat two rows from the two Chinese experts.

The environment on the plane is an enclosed space. If passengers do not strictly comply with protective measures, the risk of infection is high, he said.

Việt Nam has reported flight attendants infected with COVID-19. It is compulsory for passengers to wear masks on the plane, but sometimes they take off the masks. Coughing, talking, and sneezing on the place can spread the virus. Pathogens can be found on the surfaces of chairs and toilet door knobs. If a person touches those surfaces then touches their eyes, nose or mouth, they can be infected, he said.

In a related move, seven provinces and cities in Viet Nam have closed schools from Tuesday amid the high risk of COVID-19 community infection. 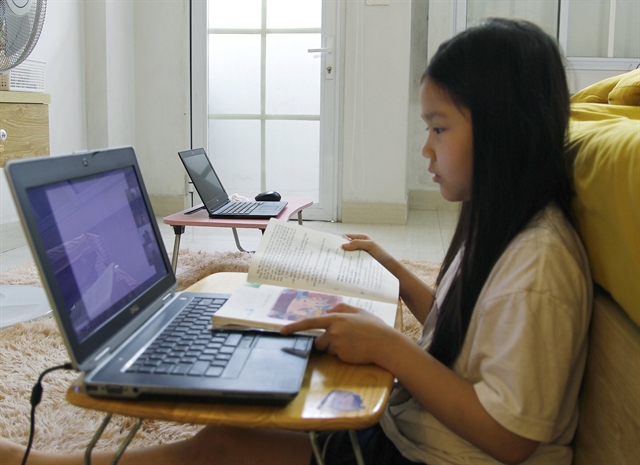 A student in Hà Nội learns from home on Tuesday as schools in the city remain closed, starting from Tuesday. — VNA/VNS Photo

Children at kindergarten and students at primary, secondary and high schools in Hà Nội, Đà Nẵng, Quảng Nam, Hưng Yên have been off from schools since Tuesday until further notice after community cases were detected in these areas.

Most universities in Hà Nội have turned to distance learning.

Schools in Vĩnh Phúc Province will be closed until May 8. — VNS