Many luxury hotels remain deserted with no foreign guests during Covid-19 and, as a result, hoteliers have slashed room rates to survive the difficult period. 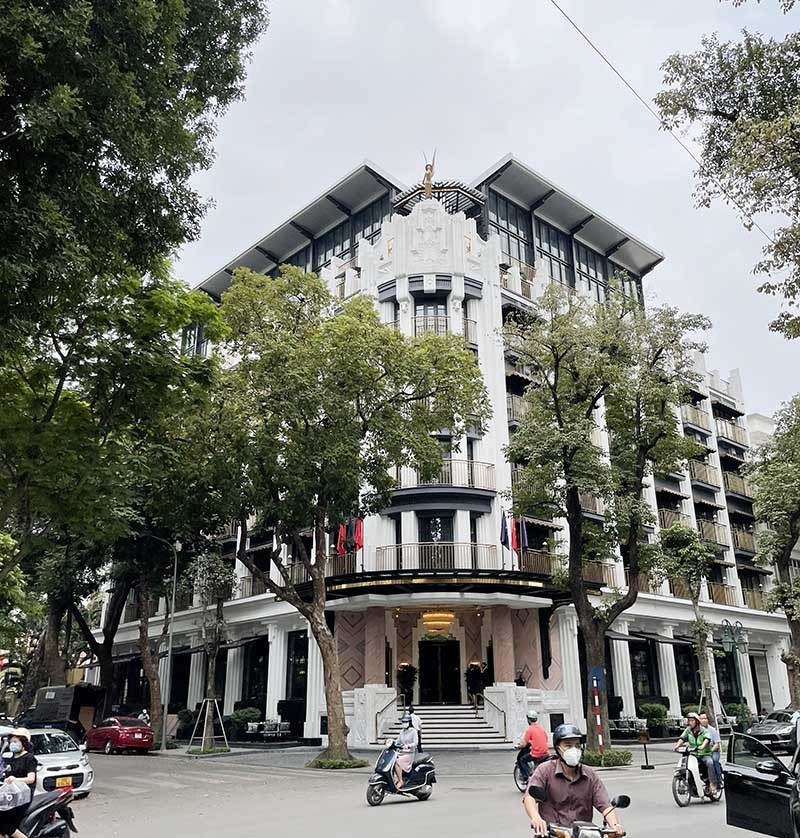 Located at the noisy Thai Ha – Tay Son Crossroads, a luxury hotel is deserted with only several security guards at the entrance door. The project has been facing bad luck since its opening. It initially was an office building but offices were in oversupply and the investor had to shift to another business model.

The building was then redesigned to turn it into a hotel. However, it once again met ill fortune when the Covid-19 pandemic broke out. Lockdowns and restricted travel policy have kept it deserted.

Even a gold-plated hotel is facing difficulties. With 360 rooms and many gold-plated items, the construction required investment capital of $100 million. The work was executed within 18 months and completed in March 2020, ready to serve the F1 tournament that was later postponed because of Covid-19. The hotel opening day was also delayed.

Other luxury hotels bearing international brands in Hanoi are in the same situation. Matthew Powell from Savills Hanoi said hotels in Hanoi had a difficult quarter because of the impact of another Covid-19 wave which decreased market capacity.

Meanwhile, Capella Hotel in Hoan Kiem was put into operation in Q1, but it has not been rated yet. Two 3-star hotels with 130 rooms had closed by the end of the last quarter.

The Covid-19 resurgence in January in Hanoi led to a reduction in hotel room occupancy rate in February and March to below 20 percent. Five-star hotels led the market in terms of revenue per available room in Q1 with $25/room/night.

According to the Hanoi Tourism Department, after the Covid-19 outbreak was controlled, tourism points in Hanoi reopened in March. About 685,000 travelers came to Hanoi, a 180 percent month-on-month and 360 percent year on year increase.

An OAG (Official Aviation Guide) report showed that the Hanoi-HCM City air route continued to be the second busiest route in the world in March with 980,000 passengers.

HCMC – Four Vietnamese citizens and two Indian experts who entered Vietnam from overseas have been confirmed as Vietnam’s latest Covid-19 patients, sending the total number of cases in the country to 2,791 as of this evening, April 19, said the Ministry of Health.

The fresh cases were taken to quarantine centers upon their arrival in the country.

Among them, one Indian expert traveled from Dubai to Vietnam through Noi Bai International Airport on April 18 and is under medical treatment at the National Hospital for Tropical Diseases in Hanoi.

The other Indian expert entered from Vietnam from India on April 10, transiting in Dubai. He is being treated and quarantined in HCMC.

As for the four Vietnamese citizens, a man returned home from Japan on April 16 and is under medical treatment in the central province of Phu Yen, while a Saigonese entered Vietnam through Moc Bai Border Gate in Tay Ninh Province on April 17 and is being quarantined and treated at a local medical center.

The two remaining cases arrived home from the U.S. and South Korea in April. They are under treatment at Cu Chi field hospital in HCMC.

To date, 2,475 coronavirus patients in the country have fully recovered, while 35 others had died of the respiratory disease.

In Vietnam, over half of businesses have turned to digital platforms to adapt to the new context amid the Covid-19 pandemic.

Vietnam’s economic transition from a middle-income to high-income economy requires growth based on labor productivity. Digital technology will be a tool for Vietnam to speed up corporate productivity, improve adaptability and develop new businesses.

Digital technology reduces information and transaction costs and provides goods and services more efficiently, with better quality and a larger customer base and new markets.

“Vietnam has a lot of potential to use the recovery process as an inflection point towards a model of greener, inclusive and competitive growth driven by innovation,” said Shawn Tan.

A report from a World Bank survey in Vietnam shows that, in 2020, about 48% of Vietnamese businesses turned to digital platforms in response to the pandemic. This increased to 59% in October 2020. Meanwhile, only 5% of firms invested in digital solutions and 7% reorganized product combinations.

Jaffar Al-Rikabi, World Bank economist, said that measuring the size of the digital economy faces many challenges: digital economy is a new concept with many different definitions; problems related to data quality; difficulty of measuring the consumption of digital products; the value of data investment in a modern economy is difficult to determine; measuring the sharing economy, and the challenges in understanding how the economy works when companies benefit from cross-border operations.

After exchanging experiences from a number of countries around the world, officials of the General Statistics Office said that measuring the digital economy is a technical problem and very complicated, especially because identifying and collecting information is still a new thing.

In some developed countries as well as countries that have identified digital transformation as a key industry, they have invested in information gathering to make decisions as well as investment direction for digital infrastructure and digital economy for economic development.

“Vietnam is choosing the digital economy as one of the top priorities. Therefore, we would like to have advice to be able to make decisions, especially to agree on how to understand and identify the current and forward-looking digital economy,” Huong said. 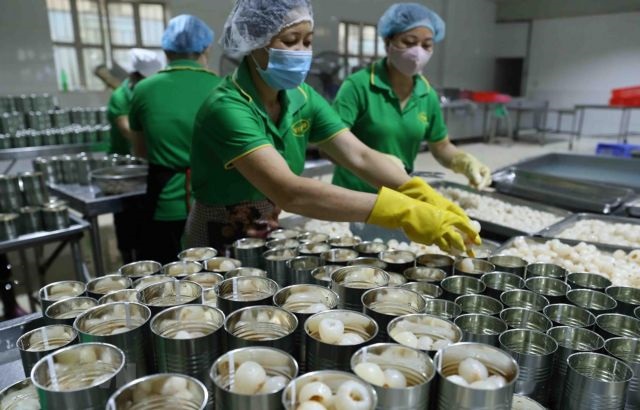 Lychee being canned for export to the US. Việt Nam’s exports to the US in the first two months of the year accounted for $13.83 billion or 28.4 per cent of total exports. VNA/VNS Photo Vũ Sinh

Exports for the year as of March 15 were worth US$62.01 billion, a year-on-year increase of 22.7 per cent, according to the General Department of Việt Nam Customs.

Exports to the US in the first two months of the year accounted for $13.83 billion or 28.4 per cent of total exports.

In recent years the US has become Việt Nam’s biggest market. Last year, for instance, at $76.4 billion it accounted for 27 per cent of the latter’s total exports.

Thân Đức Việt, general director of Garment 10 Joint Stock Company, said there were several factors behind Việt Nam’s rapid growth in exports including to the US.

Primarily, he said, the COVID-19 pandemic has gradually been controlled around the world, especially after several countries started vaccinating their populations, enabling many of them to reopen their borders and trade to resume.

Businesses in the country, hit badly for the last year or so by the pandemic, are making strenuous efforts to bounce back, he pointed out.

Many countries around the world have rolled out large stimulus packages to spend their way out of the economic slump, and this has revived trade, he added.

Many analysts concurred with these views, saying the US recently launched a $1.9 trillion package to make direct payments of $1,400 to individuals earning up to $75,000 a year starting in April.

This is the third and largest stimulus since the COVID-19 pandemic broke out.

Việt Nam, one of the US’s major exporters, supplying essential items like fisheries products and garments and electronics, is expected to benefit from this relief package.

Việt of Garment 10 told Đầu Tư Chứng Khoán magazine that Vietnamese exporters hope to get orders from the US.

Americans are known as big spenders, and if they get the money from the Government consumption would surely rise, he said.

His own company’s exports to the US saw relatively high growth in the first quarter and are expected to grow further due to the huge new stimulus package.

Bùi Việt Quang, general director of Red River Garment Joint Stock Company, said his company had enough export orders for until August this year, 80 per cent from the US.

“The US’s $1.9 trillion stimulus package will surely affect enterprises that export to the market. We expect to see robust growth [in US export orders] in the fourth quarter.”

Analysts said a recovery in the US economy would help Vietnamese exporters, especially those in the textile and garment industry.

However, analysts also sounded a warning saying while the US stimulus packages would benefit Việt Nam’s exporters in the short term, loose monetary policies could cause high inflation, which would increase their costs whereas they would not be able to increase prices immediately, affecting their margins.

Besides, the inflation would also hurt demand, they added.

Why property companies want to own banks

Nguyễn Tuấn Anh, director of the State Bank of Việt Nam’s department of credit for economic sectors, said growth in bank lending to the property sector in 2020 was 9.97 per cent, lower than the overall credit growth rate of 12.13 per cent.

This is becoming an emerging trend.

Enterprises in the sector have found it difficult to borrow from banks after the central bank issued a circular in 2019 prescribing limits and prudential ratios for banks.

This was aimed at controlling credit to high-risk sectors like real estate.

In the event, the only option real estate companies have is to themselves acquire stakes in banks.

They also target owning a piece of securities firms since that would enable them to mobilise capital from the market by issuing stocks and bonds.

Analysts said the finance and property sectors always have a symbiotic relationship since the latter is highly capital intensive with slow returns.

Thus, Vingroup has tied up with Techcombank, MIKGroup with VPBank, Đất Xanh Group with Viet A Bank, and TNR Holdings Việt Nam with MSB.

While the Government’s efforts to control lending to the property sector have had some effect, banks remain an important source of funding for real estate development projects.

This trend is expected continue in future, analysts said. VNS 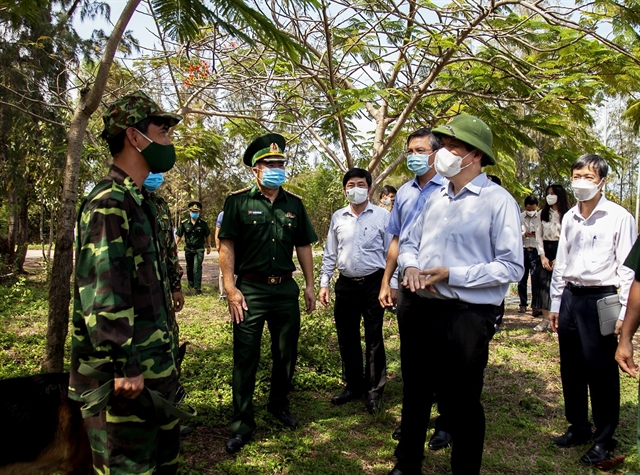 HCM CITY — The Ministry of Health has set up five inspection teams for COVID-19 prevention and control measures, including vaccinations, in the southwest from April 18-30.

On April 18, a team led by Minister of Health Nguyễn Thanh Long travelled to Kiên Giang Province to meet the local Steering Committee for COVID-19 Prevention and Control and checked activity at the international border gate and stations, quarantine areas, and a health centre in Hà Tiên city.

Speaking at the meeting, Hà Văn Phúc, head of the province’s Department of Health, said that COVID-19 prevention and control at the border has been very stressful because neighbouring countries are seeing an increase in cases.

The province is at high risk of community transmission, Phúc said.

The control of migration through trails, border crossings and the sea is difficult, he added.

The working conditions for soldiers at border stations are also difficult as they have to ensure strict control of migrants via the border and sea, he said.

All COVID-19 patients who enter the province are brought to Hà Tiên District Health Centre for treatment, he said, adding that the centre is small and can treat only 30 patients.

The province has three COVID-19 testing machines with the maximum capacity of 600 samples per day, but this number does not ensure rapid tracing as the ministry has required, he added.

Phúc also suggested that the ministry should give priority to providing COVID-19 vaccines in the next phase of the national vaccination drive.

Minister of Health Nguyễn Thanh Long said that the province should prepare for worst-case scenarios if COVID breaks out again.

He told the HCM City Pasteur Institute and relevant agencies to help the province upgrade its testing capacity. VNS