The cockpit voice recorder from a crashed Indonesian jet has been retrieved in “good condition”, officials said Wednesday, more than two months after the airliner plunged into the sea killing all 62 passengers and crew.

The CVR records flight crew conversations and could offer critical clues about why the Sriwijaya Air Boeing 737-500 dived around 3,000 metres (10,000 feet) into waters off Jakarta just minutes after takeoff on January 9.


The jet’s flight data recorder, which holds information about the speed, altitude and direction of the plane, was earlier plucked from the wreckage-littered Java Sea.

Authorities said Wednesday that the voice recorder unit was in good condition, despite having been in the water for months.

“So we’re confident that we will be able to download its data,” said Soerjanto Tjahjono, head of Indonesia’s National Transportation Safety Committee.

Investigators want to mine the recorder in the hopes of learning what the crew was saying when the flight from the capital to Pontianak in Borneo went down.

Cockpit voice and flight data recorders are known as black boxes and help explain nearly 90 percent of all crashes, according to aviation experts.

The voice device was found Tuesday evening on the last day of an operation that used dredging equipment to comb the muddy seabed, after the dive search failed to locate it, they said.

“It was like trying to find a needle in a haystack,” Tjahjono told reporters earlier Wednesday.

“But without the CVR, it would be very difficult to find the cause of the Sriwijaya Air accident.”

A preliminary report last month into the crash said crews on previous flights had described the jet’s throttle system as “unserviceable” and that it had been repaired several times before its fatal final flight.

The report said a catastrophic throttle malfunction and possible human error were among the factors being considered.

But investigators had said it was too early to pinpoint a cause.

The 737 had sharply deviated from its intended course just before its plunge.

Despite appeals from air traffic controllers, the crew — including an experienced captain — did not respond to questions about the sudden change of direction.

The 26-year-old plane was flown by US-based Continental Airlines and United Airlines before it was purchased by Sriwijaya, which flies to destinations in Indonesia and across Southeast Asia.

Indonesia, a vast archipelago that relies heavily on air transport to connect its thousands of islands, has suffered a string of deadly plane crashes in recent years.

That accident — and another in Ethiopia — led to the worldwide grounding of the 737 MAX over a faulty anti-stall system.

The 737 that crashed in January was not a MAX variant.

HANOI – Vietnam has allowed Boeing 737 Max planes to transit in the country after they were suspended in 2019 over safety concerns, state media reported on Tuesday, citing the Ministry of Transport.

The ministry has approved a proposal from the aviation authority following reports on safety and the resumption of the operations of the aircraft elsewhere in the world.

The Civil Aviation Authority Of Vietnam (CAAV) in March 2019 suspended issuing licenses to 737 MAX planes until the cause of an Ethiopian crash was determined.

The ministry has told CAAV to keep monitoring the situation and updating information from the aviation authorities of other countries before fully allowing the operations of the aircraft, the report added.

The United States lifted its own ban on the 737 MAX in November, followed by Brazil and Canada.

The decision was taken following a proposal made by the Civil Aviation Authority of Vietnam (CAAV) last month, citing Boeing’s efforts to address technical issues of the aircraft and assessments by aviation authorities in the U.S. and Europe.

However, the ministry has ordered CAAV to continue monitoring related issues and updating itself with information from peers in China, Australia and Russia, countries that have not yet opened up their airspace for this aircraft model.

The ministry also said that after these countries lift their respective bans on the aircraft and if it meets Vietnamese regulations, the CAAV can report it for the ministry to consider permission for the aircraft to operate in and be imported into Vietnam.

The U.S. allowed the Boeing 737 Max to resume operations in December and Europe did so in January.

The Boeing 737 Max aircraft was grounded worldwide in March 2019 after 346 people were killed in two crashes in the space of a few months in Indonesia and Ethiopia.

The Civil Aviation Authority of Vietnam (CAA) is responsible for assessing the prospect for the aircraft to be imported to Vietnam.

The Ministry of Transport (MoT) has announced its approval for Boeing B737Max airplanes to fly over Vietnam’s airspace.

The MoT, however, requested the Civil Aviation Authority of Vietnam (CAA) to follow and update information from its foreign peers in Russia, Australia and China regarding their decision over the aircraft model.

The CAA is also responsible for assessing the safety aspect of the Boeing B737 Max, a step that is required for later issuance of operational license for the aircraft to be imported to Vietnam.

The CAA previously proposed the MoT to allow B737 Max airplanes to enter or transit Vietnam’s airspace, citing Boeing’s efforts to address technical issues of the aircraft model and assessment from aviation authorities in the US, Canada, Europe and Brazil.

According to the US Federal Aviation Administration (FAA) and Boeing, countries around the world have all lifted their respective bans on Boeing 737 Max, excepting China, Russia, Australia and those in Southeast Asia.

Boeing 737 Max aircraft was grounded worldwide after the crash of two planes operated by Lion Air and Ethiopian Airlines in the 2018-19 period that killed 346 people, in which the main issue was related to the Maneuvering Characteristics Augmented System (MCAS).

In Vietnam, a number of local airlines have expressed interests in Boeing’s 737 Max model to reduce their dependence on Airbus’ A320 aircraft. 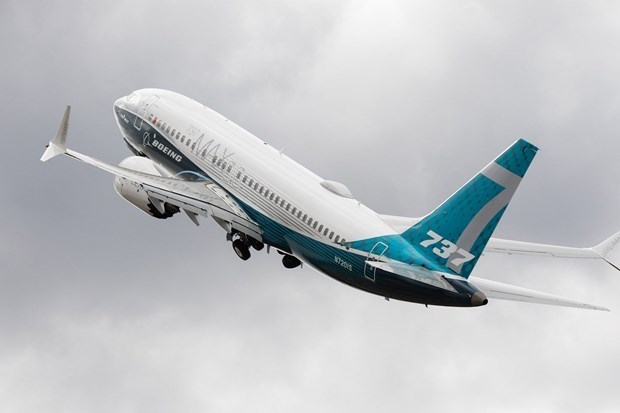 Hanoi (VNA) – The Ministry of Transport has agreed with a proposal from the Civil Aviation Authority of Vietnam (CAAV) to allow the Boeing 737 Max aircraft to transit through Vietnam’s airspace.

The proposal was made based on Boeing’s corrective work; assessments from major aviation authorities around the world, such as the US’s Federal Aviation Administration (FAA), the Transport Canada Civil Aviation, and the European Union Aviation Safety Agency (EASA); and the aircraft’s performance indicators.

The ministry also requested that CAAV update it on information from aviation authorities in Russia, Australia, and China.

In March 2019, the CAAV decided to nullify the granted licenses and not to grant new ones for flights using the Boeing 737 Max to operate in Vietnam’s airspace .

The move was made following the Ethiopian Airlines crash a few days before, which was the second involving the Boeing 737 Max in just several months.

However, the ban on the aircraft has been lifted by most of the countries worldwide, except for China, Russia, Australia and Southeast Asian nations, according to the FAA and Boeing./.

Bamboo Airways is planning to sell 5-7% of its share in the IPO this Q3 and seeking a valuation of at least US$4 billion after the listing.

“The IPO is a part of our efforts to expand services globally,” said FLC Group chairman Trinh Van Quyet. The airline has been working with an international auditing firm for the potential listing on the New York Stock Exchange.

Bamboo Airways last month announced it will list its share on the Vietnam Stock Exchange in Q3, however, Quyet told Reuters that “it was a backup plan, depending on market conditions”.

Bamboo Airways plans to increase its fleet from the current 30 to 40 by the end of this year, including two new Boeing 787-9 Dreamliners, Quyet added.

The airline is seeking to launch new routes to the U.S., Australia, Germany, Japan and the United Kingdom this year should COVID-19 pandemic improve.

It plans to conduct chartered flights to the U.S. in July, and launch non-stop commercial flights between Ho Chi Minh City and San Francisco in September, with an initial frequency of three flights per week.

This year, Bamboo Airways targets a 25% rise in pretax profit to VND500 billion.