The news site Porady published a feature on Vietnam’s new leaders and opportunities for Ukraine by Ruslan Bortnik, head of the Ukrainian Institute of Politics.

The author said an increasing number of IT start-ups in the nation has attracted a significant amount of foreign investment. The people and society, meanwhile, put enormous faith in the capacity of the new leadership to successfully carry out economic development tasks and strengthen the country’s position in the international arena.

In its recent article, from-ua.com said with achievements in the fight against COVID-19, Vietnam is planning to reopen its door to international visitors in July. The nation is also welcoming foreign investors in the context that it houses a large number of advanced production models and strong economic groups.

The article noted that high-ranking personnel changes taking place in stable political conditions and robust socio-economic development are a premise for strengthening local people’s confidence on the path of completing institution, promoting strong interactions between society and authorities, and improving the overall “happiness index”.

Other Ukrainian newswires, including Golos.ua, also posted articles analysing Vietnam’s reform experience and reviewing its growth, particularly the nation’s effective pandemic containment and economic development last year. They were confident in the new leadership’s capacity of steering the country toward sustainable growth and higher international positions.

The Ministry of Construction in coordination with the UN Human Settlements Program (UN-Habitat) and SECO organized a workshop on April 13 to launch the project.

According to Dr. Nguyen Quang, UN-Habitat Program Manager in Vietnam, of the total funding for the 2020-2025 project, 3.8 million CHF will be managed by UN-Habitat while 450,000 CHF will be under the management of SECO.

The main goal of the project is to strengthen the capacity of national and local institutions to promote, plan, and implement innovative and participatory solutions for sustainable urban development in Vietnam.

The project will be implemented over a period of five years by UN-Habitat in close coordination with the Ministry of Construction, the Ministry of Planning and Investment, and city governments.

Marcel Reymond, head of Development Cooperation at the Embassy of Switzerland in Vietnam, said Vietnam’s socio-economic growth will only be maintained if there are measures to enhance the economic potential and competitiveness of urban areas and to improve the living standards of urban residents.

He expressed his belief that the project will bring about great socio-economic and environmental benefits, thus facilitating the transformation of sustainable development models in Vietnamese cities.

Vietnam is among countries with the most rapid urbanization rates in Southeast Asia, with the number of urban areas jumping from 480 to 830 between 1986 and 2019.

Deputy Minister of Science and Technology Le Xuan Dinh reported at the meeting that science and technology has contributed greatly to national development, as seen in the growing contribution of the total factor productivity (TFP) to national economic growth, from an average 33.6 percent in the 2011-2015 period to 45.2 percent in the 2016-2020. The country’s Global Innovation Index (GII) was ranked 42nd among 131 countries and territories, third in ASEAN and topped the group of nations with the same level of income.

Investment in science-technology now comes from both the State budget (52 percent) and businesses (48 percent) instead of relying entirely on the State like 10 years ago.

All new technology has its own story that goes hand in hand with research and development, yet taking more than two decades for R&D like BlueScope’s Activate ® technology is barely seen in the industry. Surprisingly, the ‘abnormality’ in the Activate® R&D enables this unique technology to set a ‘new norm’ in Viet Nam’s alloy-coated steel industry. The story of researching and developing Activate® told by Mr. Daniel Parker, Process Development Manager, BlueScope Innovation unveils underlying know-how of this very technology.

It is common sense that the market is constantly changing and so is technology. What inspired BlueScope to develop Activate® – a technology that can still claim “best-of-the-best” regardless of more than 20 years of testing?

At BlueScope, we understand that our success depends on our customers choosing us. That’s why we work closely with them to create value and trust, share ideas and bring the benefits of innovative, sustainable products and services to their own businesses and projects.

We have manufacturing operations in 18 countries, and sales offices in other locations around the world. Through this supply network, around 14,000 BlueScope people serve thousands of customers worldwide. That’s to say we have in-depth understanding of customers’ needs and our customers, as end users, have always been looking for ways to expand the lifespan of their plant/workshops/buildings, maximising their investment. This is where our Activate technology fits in.

So why did it take BlueScope more than 20 years to invent the Activate® technology?

In order to ensure the new generation of COLORBOND® steel and ZINCALUME® steel with Activate® coating technology lives up to the highest expectations in durability, we conducted a comprehensive testing programme that included accelerated laboratory corrosion tests, as well as real-world outdoor exposure tests. Over a 20-year period, more than 8,000 profile panels have undergone Q-Fog cyclic testing and salt spray testing in laboratories. A further 10,000 panels have been tested in 22 different exposure sites in Australia and around the world. The Activate technology is covered by over 20 patent applications that have been filed worldwide, related to the unique and effective microstructure in our new technology that differentiates it from any other product on the market.

Additionally, during the product development stage, 50 building sites comprising a wide range of applications, as well as five purpose-built test structures, have been tested in real-world conditions and in severe marine environment. The new technology has also been validated by 3rd party testing and benchmarked against the latest coated products around the world through the French Corrosion Institute, proving that COLORBOND® steel with Activate® technology is highly durable, especially at the cut edge, and more resilient to scratches and scuffs during construction.

What makes Activate ® technology corrosion resistant? Is this technology is a good fit for challenging environments in the industrial or coastal context?

The key factor behind BlueScope’s patented ACTIVATE® technology lies in the unique composition and microstructure of 4 phases including Aluminium – Zinc and two strategically positioned magnesium compounds.

With the unique composition and microstructure of the 4 phases, our new generation COLORBOND® steel and ZINCALUME® steel create a self-sealing effect that greatly improves corrosion resistance at cut edges, screw holes, and scratches. This mechanism improves the protection of projects in difficult environments such as marine and polluted industrial sites, enabling them to withstand the test of time. And of course it’s a good “candidate” for any projects in Viet Nam from benign environments to more challenging environments close to marine or industrial areas.

Since its launch in 2019, has Activate been widely applied by investors?

Our Activate® technology was launched in Australia in 2013. After six years of presence in a variety of global projects, NS BlueScope Vietnam made a business decision to introduce this very technology to Viet Nam’s market as a breakthrough to improve our product quality, thereby accelerate the growth of the country’s construction industry. 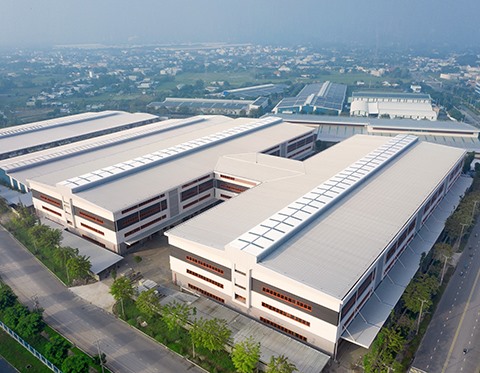 Kizuna IZ has experience in using Colorbond® steel for their ready serviced factories for more 10 years. When Activate technology was launched in 2019, they confidently chose new generation COLORBOND® steel for their new project Kizuna 3 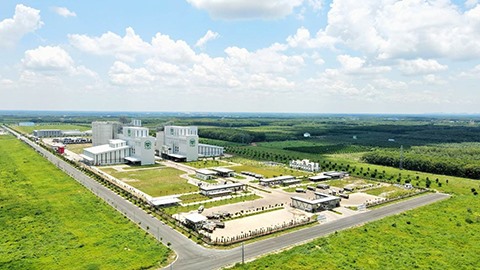 As our Activate® technology sets a new standard in Viet Nam’s alloy-coated steel industry, it is welcome by prestigious investors across several sectors. We are now having big world-class factories such as Vinfast, Kizuna, FM Logistic, C.P., Masan applying our new coating technology in Colorbond® steel or Zincalume® steel. We believe they will be the trend setters in the industry with our solutions.

HCMC – The strong cash flow pushed the VN-Index of the Hochiminh Stock Exchange up today, April 14, to its highest-ever level of 1,255.87 points.

With winners outnumbering losers by 263 to 153, the main index added 7.54 points, or 0.6%, from the session earlier. The southern market saw nearly 862 million shares worth over VND19.3 trillion changing hands, declining by 16% in volume and 18% in value compared with the previous session. Some 48.5 million shares worth over VND1.6 trillion were traded in block deals.

Besides Vingroup stocks, a few blue-chip stocks ended in the red but their decline was mainly below 1% each.

Real estate stocks HQC and DLG were not outsiders to the trend, rising to VND4,450 and VND4,000, respectively. There were 30 million HQC shares and 26 million DLG shares changing hands.

FLC’s affiliates, AMD and HAI, also rocketed to their ceiling prices of VND5,940 and VND5,390, respectively.

Developments on the Hanoi Stock Exchange were similar to those on the southern bourse as the HNX-Index also increased from the beginning of the session and closed at its highest level of the day.

FLC’s associated firms, trading and food service firm KLF and securities enterprise ART, hit their ceiling prices of VND5,800 and VND11,400, respectively. KLF was the best performer in terms of liquidity on the northern bourse with 18.54 million shares transacted.

Mining group ACM also ended the day at its ceiling price of VND4,400.

The index continued Tuesday’s dip in the morning, falling to the 1,230 range, before gradually climbing throughout the day and ending with a near 8-point gain. The index has surpassed the 2018 level by 4.3 percent.

The VN30 basket, comprising the 30 largest capped stocks, saw 20 in the green, led by MSN of conglomerate Masan Group with a ceiling rise of 6.9 percent, hitting a new peak this year.

MSN, however, has only gained 13 percent this year, roughly the same as VN-Index, while many blue chips have recorded a 30 percent increase or higher thanks to the bull market.

HPG of steelmaker Hoa Phat Group rose to a new historic peak with a 5.8 percent gain, as news of the group set to begin building its container plant in June amid a global shortage of the metal box stirs investor hopes.

NVL of real estate developer Novaland Group rose for the 10th consecutive session to a new all-time peak, up 3.6 percent.

Foreign investors turned net sellers to the tune of VND1 trillion, the highest in the last 18 sessions. Selling pressure was strongest on VHM and VNM of dairy giant Vinamilk.

The HNX-Index for stocks on the Hanoi Stock Exchange, home to mid and small caps, rose 0.9 percent, while the UPCoM-Index for the Unlisted Public Companies Market added 0.32 percent.