Thailand’s Central Retail, its owner, began the process on March 1 by changing the names of three Big C outlets in HCM City, in An Phu and Thao Dien in District 2 and Au Co in Tan Phu District, to Tops Market.

The four stores in Hanoi in Tu Liem, Ha Dong, Thanh Tri, and Thanh Xuan districts will be renamed soon.

By the end of last year five Big C hypermarkets in Nha Trang City, Can Tho and Ha Long cities and Binh Duong and Vinh Phuc provinces had their names changed to GO!.

The company said the rebranding is meant to create a new look and upgrade its shopping space.

From 2022, the Big C brand will only exist in Thailand, where it is owned by TCC Group led by tycoon Charoen Sirivadhanabhakdi.

Focusing on the home market is one of the important solutions that will help enterprises restore production and business after Covid-19 ends, experts say.

Having just launched smoked eggs, a new product, Vinh Thanh Dat now wants to increase the proportion of Vfood-brand processed food products sold in the market to 30 percent of total products by 2021, from less than 20 percent currently. 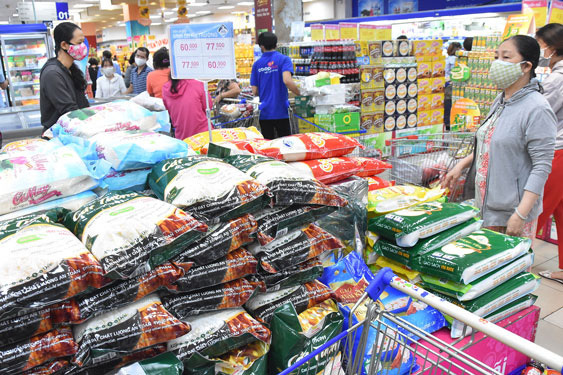 Thien said the three-month time of ‘living together with the epidemic’ was the time for Vinh Thanh Dat to design new products. Some of them will be marketed soon in a plan to develop the domestic market.

Vietnamese automaker VinFast, a subsidiary of conglomerate Vingroup, plans to build an automobile factory in the US with the aim of selling electric cars in California in 2022.

The Vietnamese automaker declined to provide details about investment, timing and location. However, the company will develop high-end models for the market in the immediate term and open 35 showrooms and service centers this year.

California authorities have granted the Vietnamese company a license to test autonomous vehicles on public streets. Last September, the US state’s Governor Gavin Newson set a roadmap to stop selling gasoline cars by 2035 in order to make it a “zero-emissions” state. This policy is considered  the driving force for VinFast to strongly invest in electric car fabrication and distribution in the US market, according to VinFast CEO Thai Thanh Hai.

The  market for electric cars in North America will not be easy for any  automaker, according to foreign experts. Ford Motor Co. and General Motors Co. are investing billions of dollars in electric cars, while other investors are also pouring  money to bring electric vehicle startups into North America through reverse mergers, typically Lucid Motors Inc., Lordstown Motors Corp., Fisker Inc., Canoo Inc., Xos.

“VinFast’s vision is to become a global smart electric car company and the US market is one of the first international markets that we will focus on,” Hai said, adding that the company is also planning sales in Canada and Europe next year. In January, VinFast introduced two luxury electric SUV models which will be sold in the US, Canada and Europe.

Entering the auto industry three years ago, the company has an auto plant in the northern province of Hai Phong and research and development centers in Australia, Germany and the US.

Previously, billionaire Pham Nhat Vuong, Chairman of Vingroup, in an interview with Bloomberg said that he would pour US$2 billion into VinFast to export cars to the US market.

HCMC – If the Hochiminh Stock Exchange (HoSE) proceeds with its plan to raise the minimum volume of shares that can be traded in an order from 100 to 1,000 to address its trading system overload, it could leave huge negative impacts on small investors and prompt many of them to leave the bourse, according to experts and investors in the field.

Thao, the owner of an eatery in HCMC’s Thu Duc City, told VnExpress that she has topped-up VND20 million to her online trading account, which she opened just a couple of days ago and she planned to start trading on the southern bourse today, March 3.

However, last night, she learned that HoSE is weighing extending the size of the standard lot.

She originally wanted to purchase the stocks of four major businesses, namely Vinamilk, The Gioi Di Dong, Vingroup and Novaland. But if HoSE effects the change, she as an inexperienced investor could only buy stocks priced below VND20,000 with the amount of money, or has to have at least VND78 million to buy shares of the real estate developer Novaland or even over VND100 million for each of the other big stocks.

“Such amounts are too huge for new investors like me,” she told the paper.

Commenting on the issue, Dr. Tran Xuan Nam, chairman of Saonam Consulting Company, said that HoSE’s plan was going against a common trend under which the stock market is set to become a platform channeling long- and medium-term capital from the widespread public into the economy.

Nam added that the local stock market could experience a strong sell-off before the plan is executed. Further, the stock market operators would need a long time to regain the trust of and entice investors to rejoin the market.

Earlier, Le Hai Tra, general director of HoSE, shared the plan with the local media, saying that once the plan takes effect, small investors would receive better protection by investing in exchanged traded funds. Also, this would promote the growth of the fund management sector and increase the number of professional investors in line with the Government’s goal.

Further, the change in the standard trading lot could reduce some 50% in the number of trading orders, paving the way for the market turnover to reach higher levels, Tra said.

HCMC – Many investors rushed to pour money into small and medium stocks, leaving many of them flying high today, March 3, as they seemed to worry about the Hochiminh Stock Exchange’s plan to raise the minimum volume of shares that can be traded in an order from 100 to 1,000 to deal with its system overload.

Among speculative stocks, property group FLC stole the limelight of the market, as it soared to its upper limit and ranked second by liquidity on the southern bourse, with 21.6 million shares changing hands.

Especially, steelmaker HPG reversed course to end higher and was the most actively traded stock on the southern bourse, with 22.3 million shares transacted.

Overall, the benchmark VN-Index rose 0.34 point, or 0.03% over the session earlier at 1,186.95, with 270 advancers and 168 decliners. Trading volume on the southern bourse improved 9.5% but value remained the same as that of the previous session, at more than 630 million shares and over VND15 trillion. Block deals contributed some VND1.5 trillion to the total value.

Twelve outlets of Big C, the long-standing supermarket brand run by Thailand’s Central Group, has had its brand identity changed after 22 years in Vietnam.

According to the announcement of Central Retail, which is Central Group’s retail subsidiary, seven Big C supermarkets inside apartment buildings were renamed Tops Market, while five Big C hypermarkets were changed to GO!

Among that, three Big C supermarkets inside apartment complexes in Ho Chi Minh City, including Big C An Phu, Big C Thao Dien, and Big C Au Co, were the first to have been relabeled.

Meanwhile, all five Big C hypermarkets have been rebranded since the end of December last year.

The brand identity change took place nearly five years behind the Thai retail giant’s schedule as the firm had originally planned to do so immediately after its acquisition of Big C Vietnam from France’s Groupe Casino in 2016.

However, the transition was not easy as Big C was a familiar brand name that had given Vietnamese consumers a long-lasting and trustworthy impression.

It also marked the disappearance of the Big C brand after 22 years of existence in Vietnam.

Big C started its presence in Vietnam in 1998 as a subsidiary of Groupe Casino.

Big C was founded by Central Group in 1993. It has operations in four countries, namely Thailand, Vietnam, Laos, and Cambodia.