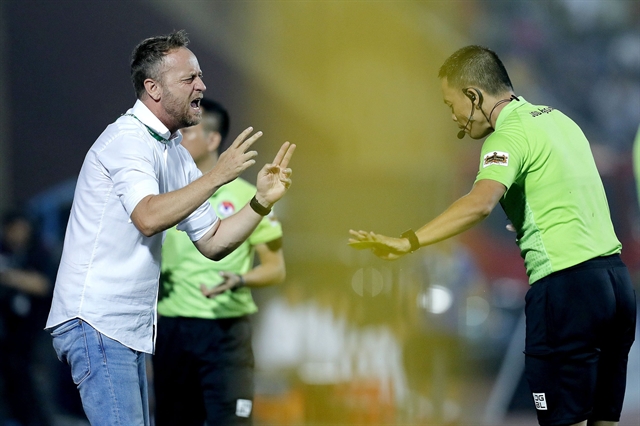 NAM ĐỊNH — HCM City FC coach Alexandre Polking slammed Nam Định for time-wasting at the end of his side’s 3-2 defeat on Sunday, but Nam Định coach Nguyễn Văn Sỹ insisted what his side did was within the limits of fair play.

At Thiên Trường stadium in Nam Định, the home team won thanks to two goals by Ossou Konan and one from Rodrigo Dias while Lâm Ti Phông’s brace wasn’t enough for HCM City to take anything.

The turning point came after a beautiful free-kick from Rodrigo Dias in the 67th minute to make the score 3-2. Tempers flared in the dying minutes and Phan Văn Hiếu of Nam Định and City star Lee Nguyễn received red cards in extra time.

After the match, Polking said he wasn’t happy to see the home team wasting time by committing fouls to preserve their lead.

“What I saw here today in the last 12 minutes is not good for the league at all. It’s a shame for me to see that. I would never do that for a team to win a game. Never,” he said, referring to time-wasting from Nam Định.

Polking congratulated Nam Định’s players and said the referee did the right thing in adding on a lot of extra time but lambasted the home team’s efforts to slow the game by throwing the ball away when it went out of play and players staying down.

Nam Định’s coach Nguyễn Văn Sỹ disagreed with Polking’s statement and said his opponents would have done the same thing if roles were reversed.

“HCM City would have done that too if they had been in the same situation,” Sỹ said.

“The dedication of the players in this match was amazing. I hope they keep their determination in the next matches. This is a worthy result for the club and the fans of Nam Định.

“They said my team bought time, but they also have to look in the mirror. HCM City also injured my players. What we did to preserve the score is completely within the limits of football,” said the 49-year-old.

Nam Định currently sit sixth in the table with 15 points after 10 games, while HCM City are in 12th place with only 10 points – only one point away from bottom.

In the next match, Nam Định will meet Than Quảng Ninh, while HCM City will face defending champions Viettel. VNS 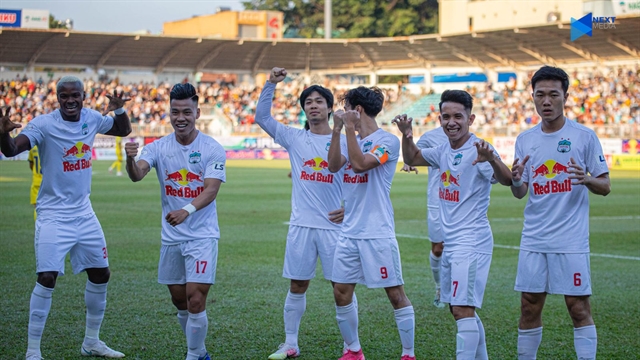 For a long time, the huge support Hoàng Anh Gia Lai (HAGL) have here in Việt Nam baffled me.

Since I arrived in the country, they haven’t finished any higher than seventh place in the V.League 1 and play in the Central Highlands city of Pleiku, not exactly one of the country’s biggest or most bustling cities.

Sure, I understood many of the national team’s top youngsters have been moulded at the club, but still, this is the country’s second-best supported team? A team made up of prodigious talents who always seem to fall short of their potential? Playing for a team literally named after a large corporation?

This season though, it’s finally starting to make sense to me.

Those talents are finally living up to the hype and HAGL sit atop the V.League 1 table, three points clear of second-placed Viettel after defeating Hà Nội FC 1-0 in Pleiku on Sunday.

Yes, Hà Nội are languishing in eighth place and barring a miracle are out of the title race, but the match was still seen as an important yardstick for HAGL due to the capital side’s dominance of domestic football in recent years.

Tickets were in such hot demand that some fans reportedly queued up from Saturday night just to get theirs, while some tickets reportedly sold on the black market for VNĐ1.5 million, a huge markup and frankly something the league shouldn’t let happen, but still an indicator of how big this game was.

As is so often the way with much-hyped matches, the actual product on the pitch failed to live up to expectations to a degree and we weren’t treated to the free-scoring spectacle many had hoped for.

That being said though, HAGL’s ability to grind out the goal to nil victory shows how this season they can actually go all the way.

Part of why HAGL are so loved is the brand of football they have played over the years or at least the brand they have espoused.

While they have never tried to walk it in like Arsenal circa mid 2000s, the Pleiku based side have been renowned for being sticklers for style and aesthetics over everything, sometimes to the cost of winning.

At the start of the 2020 season, South Korean coach Lee Tae-hoon proclaimed that his HAGL team would put aside this focus on beauty in favour of playing “like warriors” and with a “stronger spirit”.

Things didn’t quite work out for Lee, who was shown the door last November, but his replacement has shown that you don’t have to follow the Sam Allardyce school of management to produce a winning team.

Kiatisuk ‘Zico’ Senamuang has moulded essentially the same group of players Lee and several of his predecessors struggled to do anything with into a cohesive, exciting and, most importantly, winning team.

HAGL may still ship more goals than they would like, but under Senamuang they can outscore anyone and have just enough nous to hold onto leads.

Best of all, the attacking success is being driven by Vietnamese players Nguyễn Công Phượng, Nguyễn Văn Toàn, Vũ Văn Thanh and Lương Xuân Trường, who scored an absolute peach of a winner on Sunday.

While Brazilian forward Washington Brandao has had a great season so far for HAGL, it’s those Vietnamese stars who have been at the heart of the team’s attacking verve, with Toàn, in particular, showing huge strides in his development from a mere speed merchant to a canny forward.

While personally, I’ll never be able to cheer too loudly for a team named after a company, this season has finally shown me what all the fuss about HAGL is. Now they just have to go on and win the whole thing. VNS

The event opened with a series of traditional games and sports, and cooking competitions at the Hung Kings memorial area located in the Park of Culture and National History in Thu Duc City.

The main ceremony commemorating the anniversary of the kings’ death will be organised on the 10th day of the third month of the lunar calendar, which falls on Wednesday this year.

It will include incense-offering rituals dedicated to the Hung Kings, the National Father Lac Long Quan and National Mother Au Co, hosted by officials from the People’s Party Committee, People’s Committee and Motherland Front Committee.

A special exhibition of pictures and ancient objects featuring the country’s history and culture in different periods is being held.

Folk music and martial arts performances, staged by artists of leading traditional art troupes in the region, will be organised during the ceremony.

Vietnamese songs and instrumental music pieces will be performed. Patriotism, peace, love, youth and spring will be the shows’ themes.

In HCM City, a youth camp called Tự Hào Nòi Giống Tiên Rồng (Proudly Our Legends) with university students will open at 8am on Thursday at the Tao Dan Cultural Park in District 3.

As per tradition, Suoi Tien and Dam Sen parks in districts 9 and 11 will hold events for visitors to pay tribute to the Hung Kings.

Many books will feature topics on Vietnamese history and culture.

“I always visit Tao Dan Park on Hung Kings Memorial Festival every year to offer flowers and incense to commemorate the kings. I wish good health for my family members and prosperity for the whole country,” said Ly Van Chung, a resident of HCM City.

According to Vietnamese legend, Lac Long Quan, the son of Kinh Duong Vuong, married Au Co, the daughter of King De Lai. Au Co then gave birth to a sack containing 100 eggs from which 100 children were born.

The couple then decided to separate in order to populate the land. Half of the children followed their mother to the highlands, while the rest went with their father to the sea.

The first child went with his mother Au Co to Phong Chau, now Phu Tho Province. He then became King Hung I and founded Van Lang, the first recorded state in the history of Vietnam.

Ruling the country for 18 generations, the Hung Kings taught the people how to grow wet rice. They chose Nghia Linh Mountain, the highest in the region, to perform rituals devoted to rice and sun deities to pray for lush crops.

In Phu Tho, the annual Hung Kings Memorial Festival or Hung KingsTemple Festival, hosted by the province’s government, is organised from the 6th to 10th day of the third month of the lunar year.

The event consists of various ceremonies and entertaining activities for tourists and pilgrims nationwide.