Dang Dong Shrine (Thach Ban District, Long Bien District, Hanoi) is defined as a popular cultural heritage identified with the rural life of the capital. However, it is falling into oblivion and deteriorating.

Archeologists, historians, and ethnologists have recently worked with the local people to discuss the plan to restore it.

Vestige of the relic

Secluded deep in a neighborhood in Co Linh Street, shrine Dang Dong is a familiar place of worship for locals. It used to be  dedicated to the worship of a genie of Cu Linh village (renamed as Thach Ban from 1955).

Today, the Dang Dong Shrine is surrounded by fallow fields, ponds and lakes. When the ancient architecture nearly collapsed, the locals erected a makeshift structure as a place of worship.

The ancient relic is left forgotten by cultural researchers, according to Professor Tran Lam Bien, a local cultural expert. In fact, there have been many seminars to discuss the reconstruction of communal houses, pagodas, and temples but nghe or shrine is of little known and paid little attention.

Nghe or shrine used to play an important role in the cultural and religious life of the local people because it is the place to worship the supreme deity of a village, according to professor Bien.

Although the structure of nghe Dang Dong collapsed, it is still one of the three nghe – shrines of Cu Linh village. Moreover, it is a typical relic of the country’s resistance wars, according to historian Le Van Lan.

From the end of the 19th century until the August Revolution of 1945 and in the wars against France, nghe Dang Dong was where the patriots took refuge. Therefore, it is qualified to be classified as the typical revolutionary war relic.

Keeping the village spirit for the city

According to Dr. Bui The Quan, Deputy Head of Culture and Information Department of Long Bien District, the locals look forward to rebuilding nghe Dang Dong as a way to make cultural life thrive.

It is the fact that Vietnam’s countryside is changing strongly in the process of urbanization today. All the ancient villages and communes are now urbanized. That’s way, the folk spirit needs to be kept as well as the preservation of rural heritages such as temples, pagodas and folk games.

In fact, the residents still keep in mind nghe Dang Dong ’s foundation, scale, and architecture. Apart from worshiping the God Linh Hue Dai Vuonge, other religious items for worship are still kept at the place. The God is now venerated in nearby Tran Vu temple.

“Based on what we have in the place at the moment and in the memory of the local people, scientists can totally restore a full foundation, scale and architecture of nghe Dang Dong”, Dr. Nguyen Duc Nhue, Deputy Director of the Institute of History affirmed.

The local authority also said that they would consult with cultural experts to complete documents and submit to higher-level agencies for the restoration proposal of nghe Dang Dong in the coming time.

Continuing to fulfil the commitments of the Government of Vietnam with UNESCO on the conservation and promotion of the value of the Thang Long Imperial Citadel, the Thang Long – Hanoi Heritage Conservation Centre has coordinated with the Vietnam Institute of Archaeology to conduct excavation and exploration Kinh Thien Palace area covering a total area of nearly 1,000 square metres.

The excavation results continued to clarify the cultural layer, monuments and archaeological relics dating from the 7th-9th century to the 19th -20th century.

For preliminary evaluation of the exploration results at the Kinh Thien Palace area in 2021, scientists said that the highlight of the cultural layer discovered at this excavation are the artifacts of the Tran Dynasty and Le Dynasty and the Le Trung Hung (Restored Le) Era.

For the first time at Thang Long Imperial Citadel, scientists found a very unique architectural vestige of the Tran Dynasty. It is a circular architectural vestige with a diameter of more than five metres, surrounded by traces of underground culverts and a dense cultural layer of bricks and fire traces and marine mollusc shells. Next to that is a beautifully decorated terracotta pot, up to 1.2 metre in diameter.

According to scientists and experts, architectural vestiges and relic systems discovered in the excavation in 2021 continue to reflect the complex evolution of Thang Long – Hanoi historical and cultural relics.

Thereby, it has contributed more documents to help clarify the great, rich and diverse values with three globally prominent criteria of the Thang Long Imperial Citadel – a world cultural heritage site. At the same time, it also contributed some valuable materials to serve the research on restoring the main space of Kinh Thien Palace in the Le Dynasty.

Artifacts of different periods have been unearthed in the Thang Long Imperial Citadel, corroborating the great historical and cultural values of the UNESCO heritage site.

Thang Long Hanoi Heritage Conservation Center and the Vietnam Institute of Archeology have announced new discoveries, which contribute important facts for the research of the citadel.

In the excavation area of nearly 1,000 square meters in the Northeast of the Kinh Thien Palace, five cultural layers have been found about 3.3 meters underground with the nearest to the surface belongs to the Nguyen Dynasty (1802-1945), then the Le Trung Hung Dynasty (1533-1789), the Later Le Dynasty (1428-1527), the Tran Dynasty (1225-1400), the Ly Dynasty (1009-1225) and the period before Thang Long Imperial Citadel was built, according to Dr. Tong Trung Tin, Director of the Vietnam Archeology Association.

Outstanding among these findings is the deepest well ever found by local archaeologists, measuring nearly seven meters. The last time that Dr. Tin found a deep well was in 1952, with 5.9 meter. The newly found well is estimated to be deeper than the average depth of the Red River.

It is also very wide, about three meter in diameter. Its bottom is paved with flat rocks, including many layers of green rocks and large-sized pebbles, to make it leveled and add aesthetic traits to the well. This is a construction work typical of  the Tran Dynasty. The well is assumed to be built to supply water to those working at Can Chanh Palace, the workplace of the king and his court.

In the well, copper coins under King Canh Thinh (1783-1802) were found as well, giving way to the assumption that  the well was still not filled in this period.

Also in this area, archaeologists found a large pot with 1.2 meters in diameter and 55 centimeters in height. Its opening is decorated with patterns of ochnas, lotus, among others. This is possibly the largest terracotta pot under the Tran Dynasty, which is almost intact.

At the bottom-most part of the site at 4.8 meters, the archaeological team also found traces of different periods.

Particularly, the largest findings of the excavation is two arched tombs built with bricks in the pre-Thang Long period. They are  parallel to the northeast, built in an arched style. In the tombs, three ceramic pots and copper coins were found.

“This is the core zone of the citadel so we wonder why there were two tombs here?” said Dr. Tin, “it can be assumed that they had been there before the citadel was built. Found in the deepest  layer, it shows vestiges of early human settlement here, from the fourth to the sixth centuries.”

According to Associate Professor-Dr. Bui Minh Tri, Director of the Institute of Imperial Citadel Studies,  in the years between 2011-2020, the institute has completed  much of the project of revising, studying and assessing the value and making a scientific record of the Thang Long Imperial Citadel relic site with many scientific achievements.

Among them, the most prominent and important is the successful recodifications of the mysteries of the palatial architecture in the citadel based on archaeological vestiges and historical documents.

This 2020-2021 excavation has revealed a lot of new information, substantiating the value of the Thang Long Imperial Citadel of thousands of years of history.

In particular, there are many unknowns to study more thoroughly, such as a large circular architecture, which was popular in the Tran Dynasty’s constructions, but its function remains a question to archaeologists.

There are very few capitals in the world that preserve a complex of relics of a long history and culture which represented by superimposition of  layers like the Thang Long Imperial Citadel. This is an outstanding feature that contributes to the great value and uniqueness of the site that has been recognized by UNESCO, according to Tri.

Participating in the archaeological excavation at the Thang Long Imperial Citadel from the first days, Dr. Tin claimed that more historical truths of the relic site have been exposed year after year.

Local scientists expect to be able to draw the whole picture of the citadel over different periods of time soon. “Currently, only about 7% of the citadel has been excavated. Further research is necessary to restore a part of the ancient palace,” said Dr. Tin.

Addressing the event, General Phuong affirmed that the 3D travel simulator with new and modern technological software contains the land, people, culture, landscapes, typical historical sites of Binh Phuoc province, architectural works and 11 attractions at the National special relic site of the Ta Thiet military base – the Command Headquarters for the Liberation Army of South Vietnam during 1972 and 1975.

The software enables visitors to experience an interactive 3D solution, and enjoy movies, photos, traditional songs, and historical figures of the Command Headquarters for the Liberation Army of South Vietnam.

Earlier, the delegation offered incense at a memorial temple dedicated to President Ho Chi Minh and late leaders of the Command Headquarters of the Liberation Army of South Vietnam.

On this occasion, they also visited and presented gifts to local policy households and scholarships to poor children with good academic results. 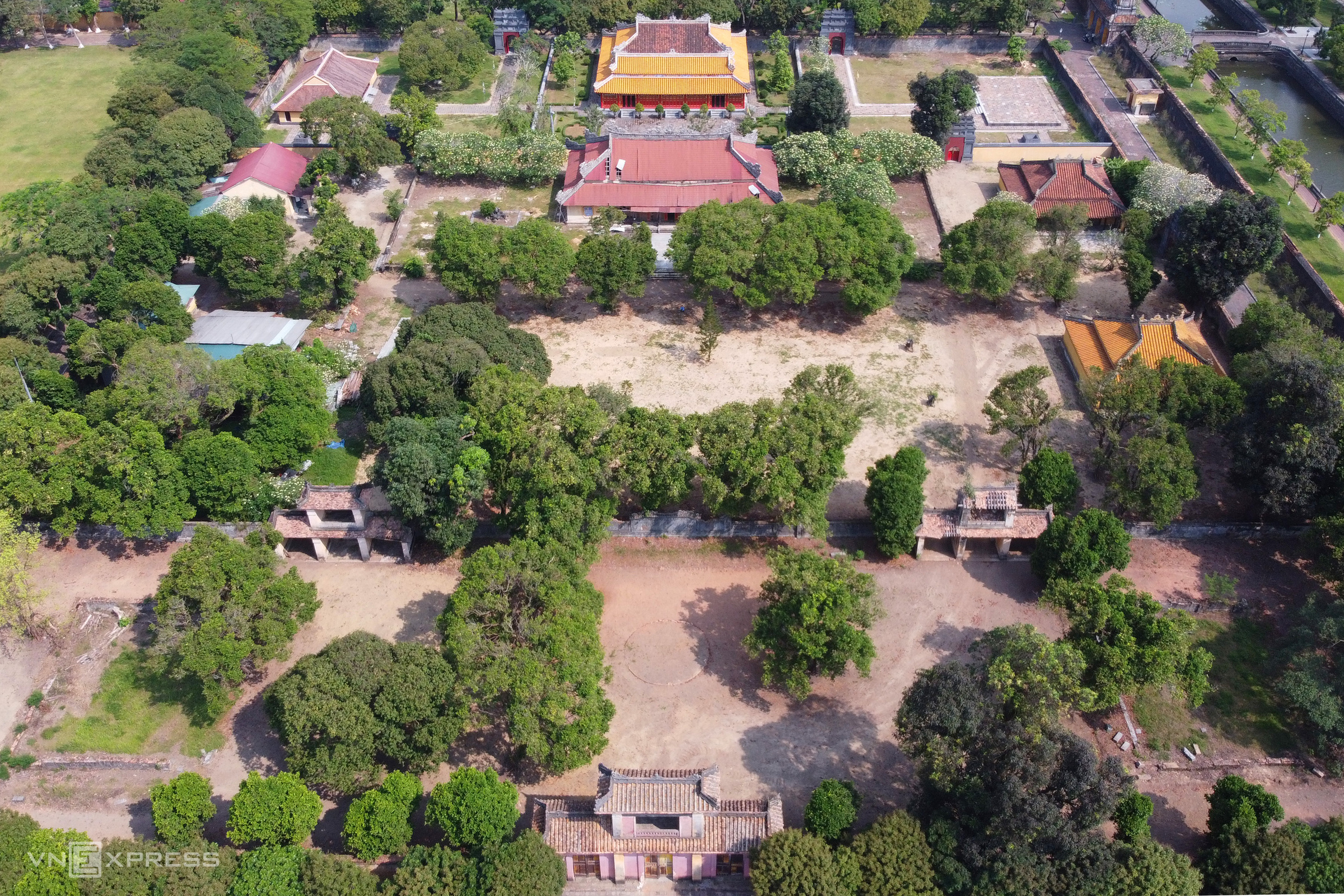 The temple complex, located in the southwest corner of the Imperial Citadel in Hue, was built in 1804 under King Gia Long of Nguyen Dynasty, Vietnam’s last royal family (1802-1945).

The complex covers an area of 15,000 square meters and is used to worship nine Nguyen lords, ancestors of the Nguyen Dynasty emperors. 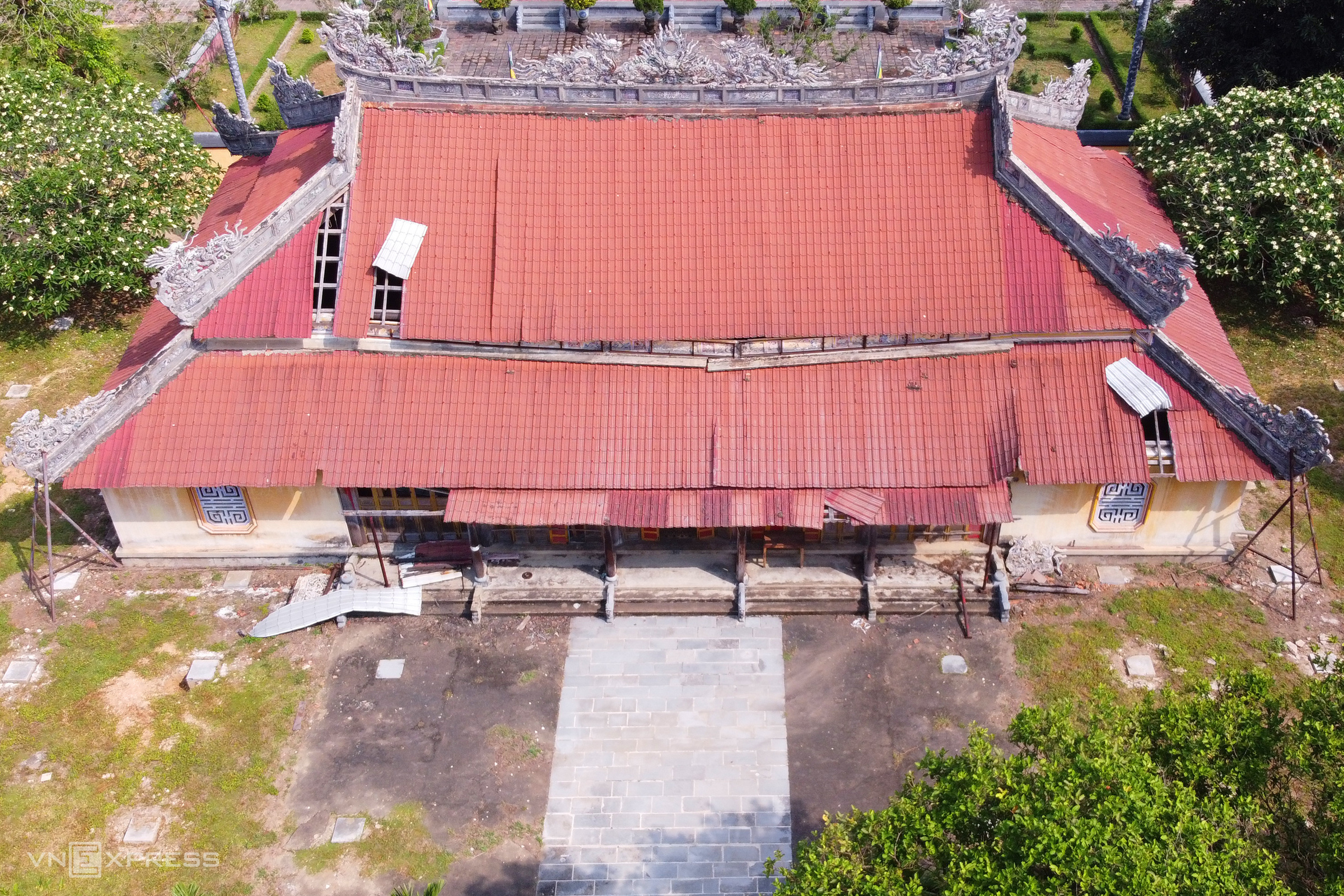 In 1947, much of the complex was burned down. In order to have a place to worship the Nguyen Dynasty lords, in 1971, Queen Mother Tu Cung and Prince Bao Long, son of Vietnam’s last king Bao Dai, contributed to rebuilding the complex in the same location. 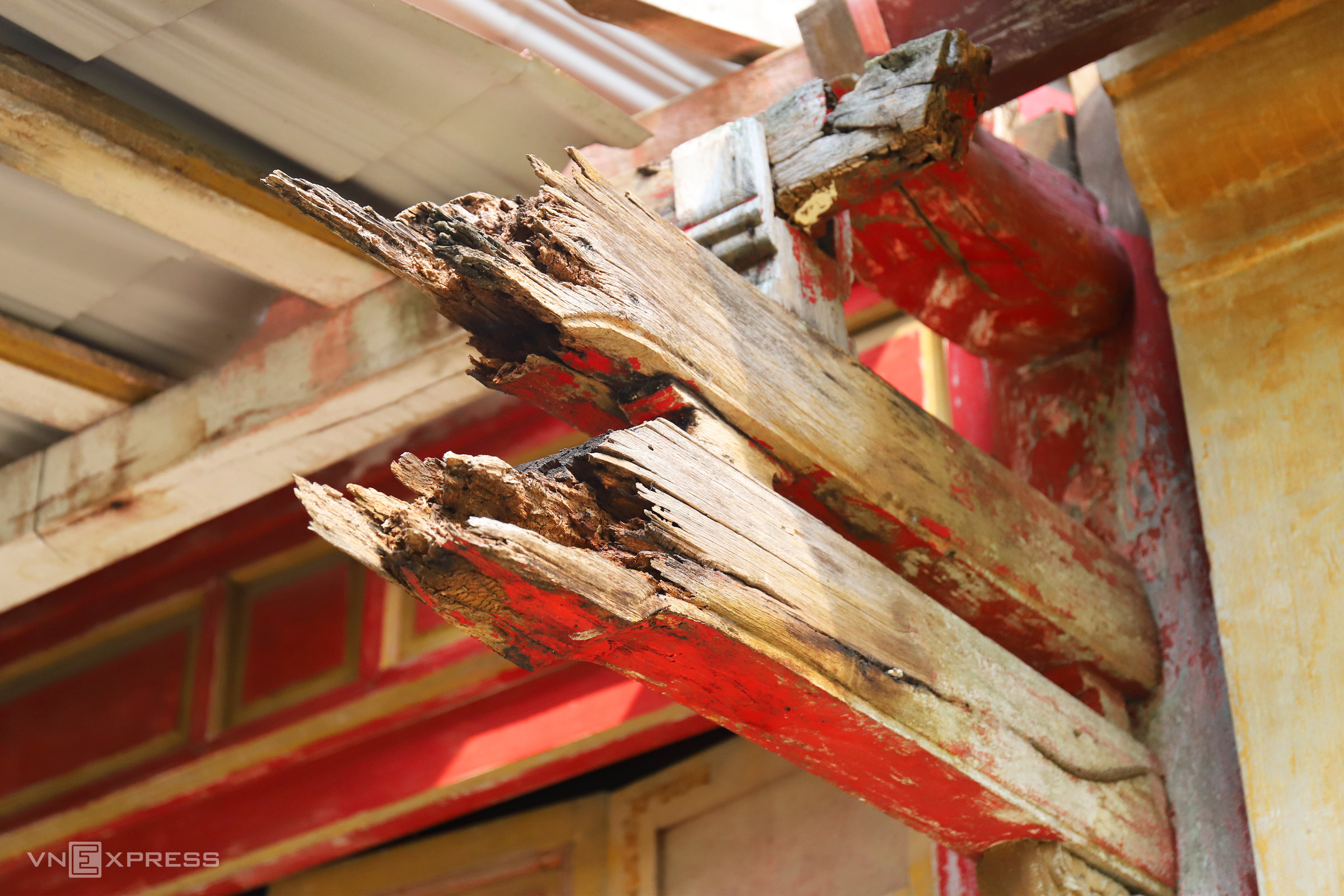 Wooden rafters have been heavily damaged by termites after years of abandonment. 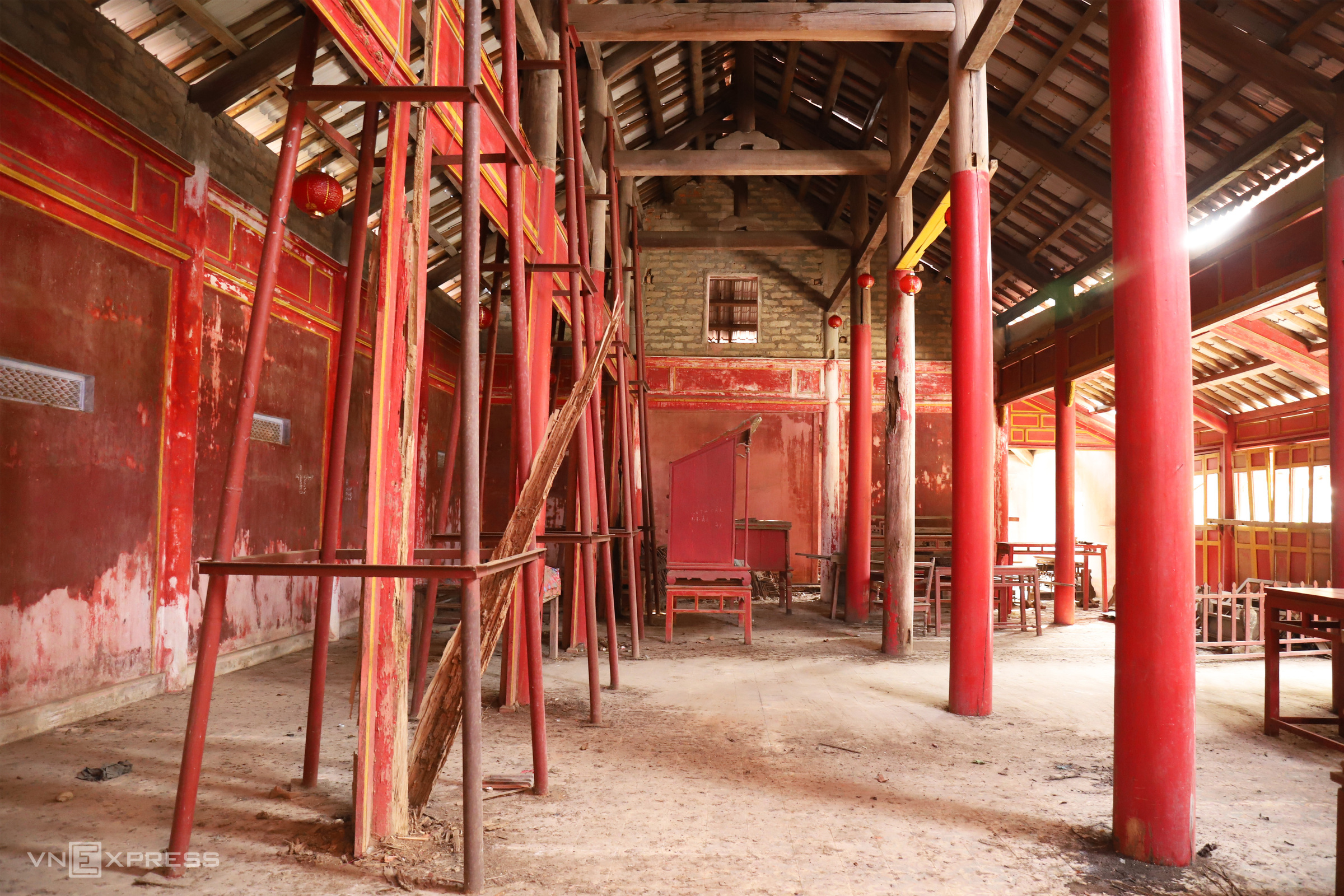 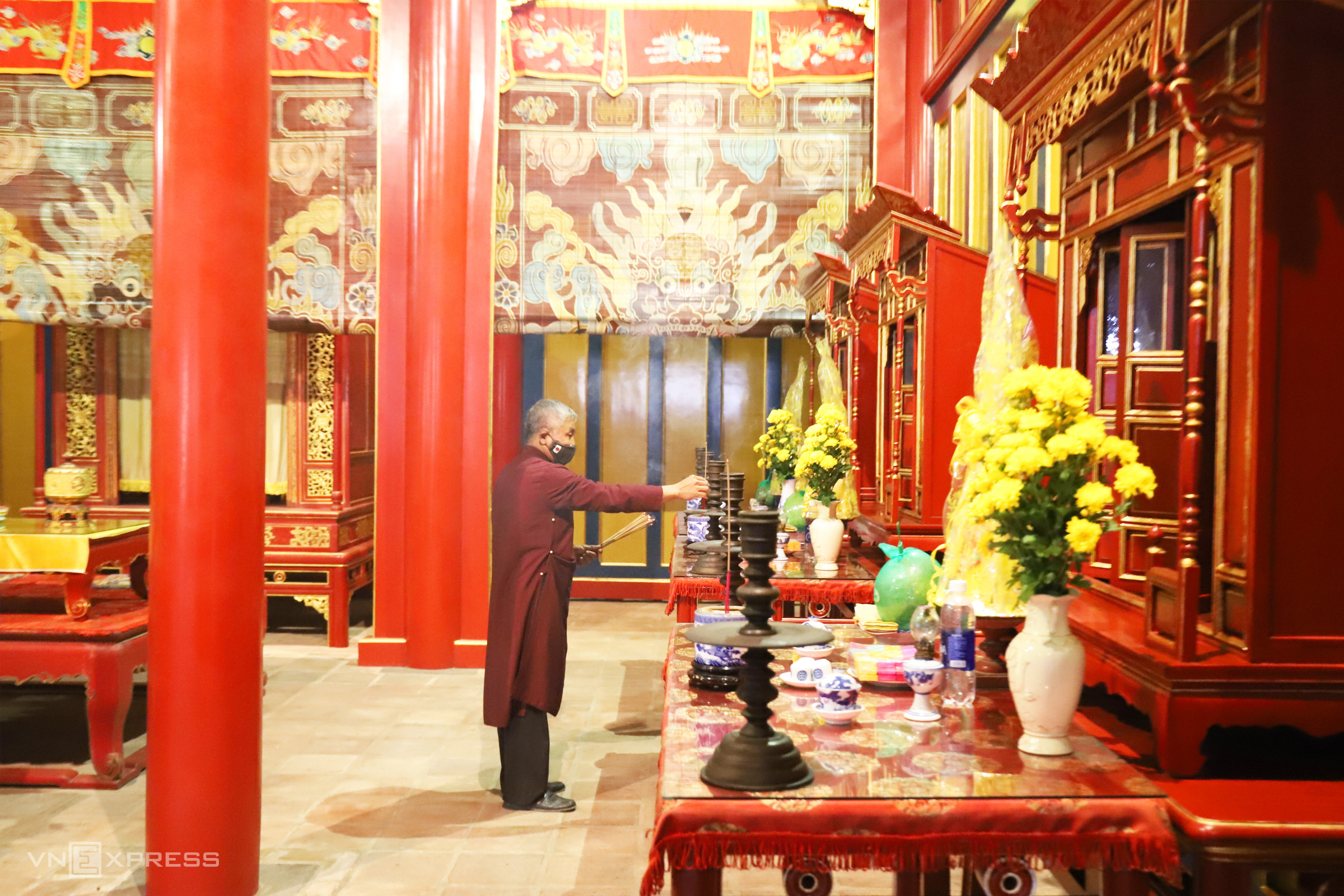 For safety, the nine Nguyen lord altars were temporarily relocated to Trieu To Temple located behind the complex.

Trieu To Temple serves to worship Nguyen Kim, father of Nguyen Hoang, the first of the Nguyen lords to rule the southern provinces between 1558 and 1613. 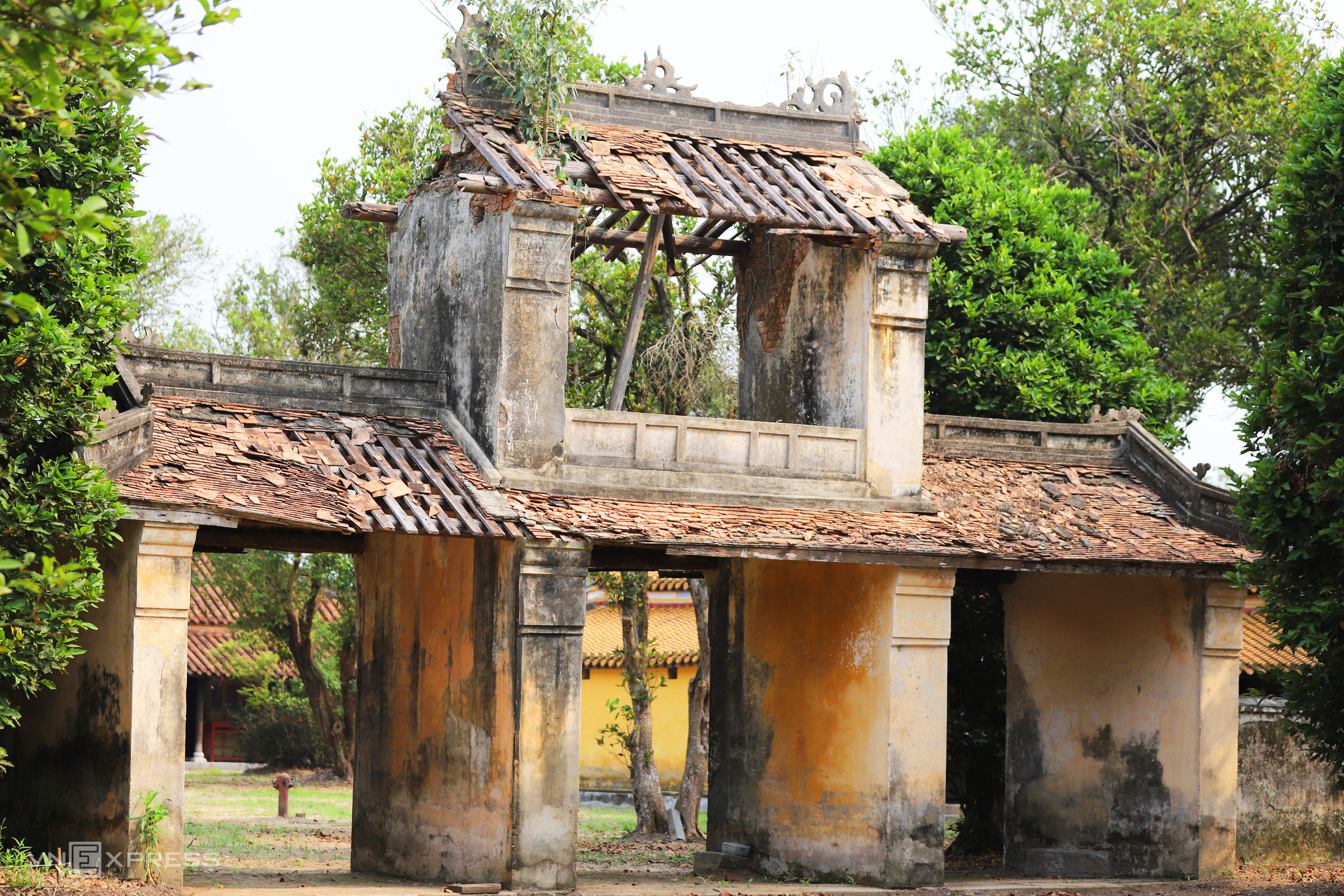 The complex is closed to tourists for safety reasons.

Hue is home to royal tombs, ancient palaces and pagodas that attract millions of foreign visitors every year. 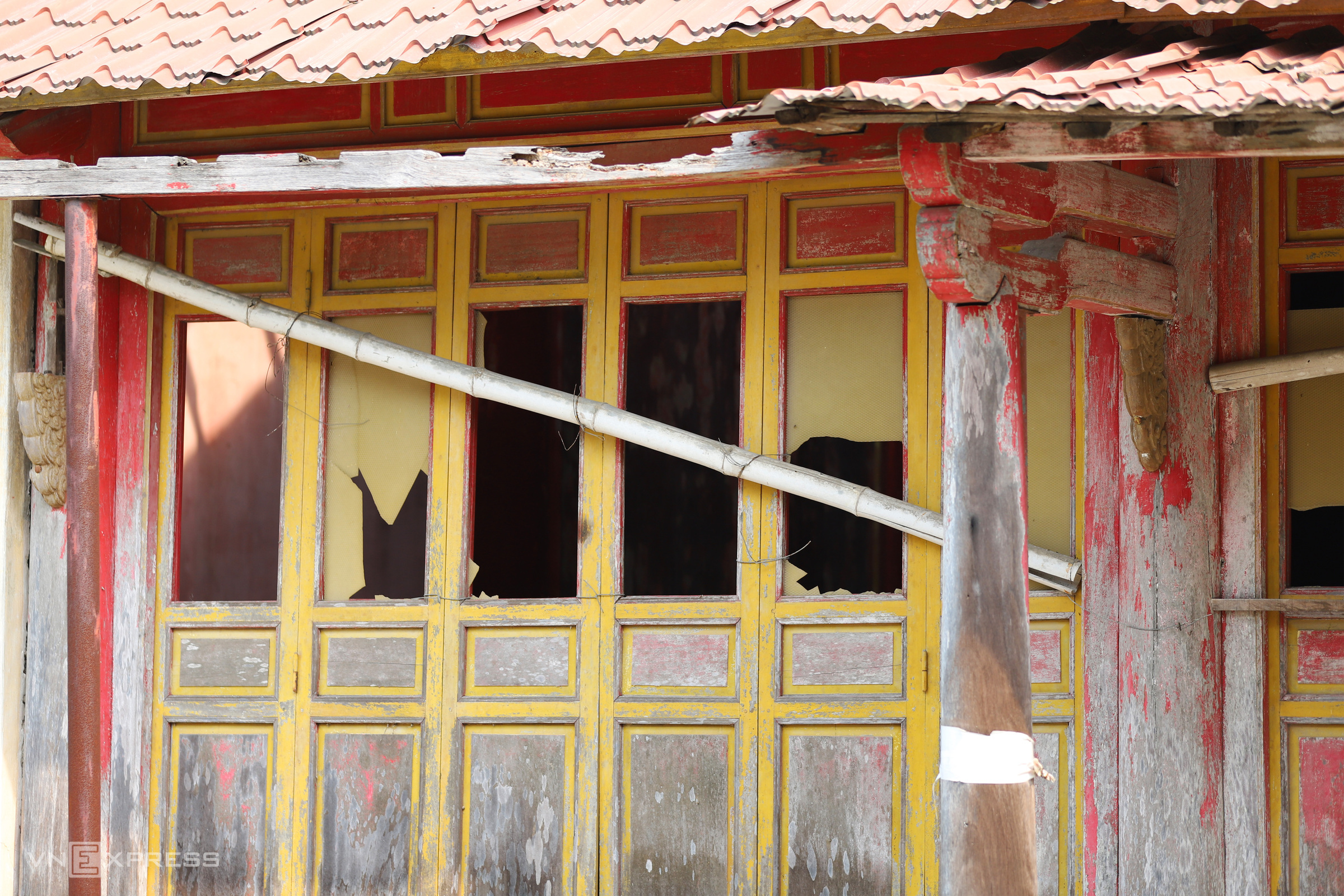 Broken windows inside the complex. 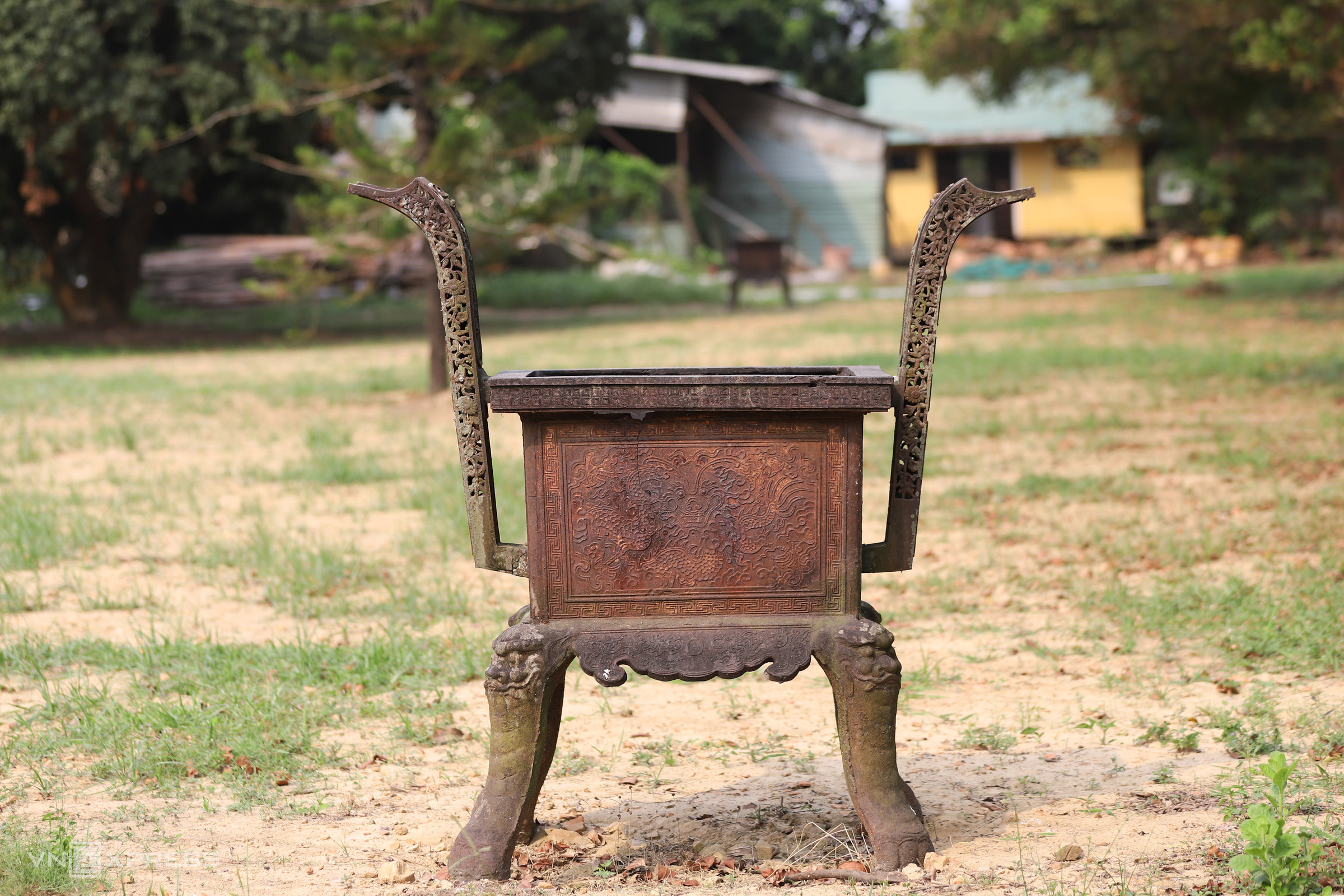 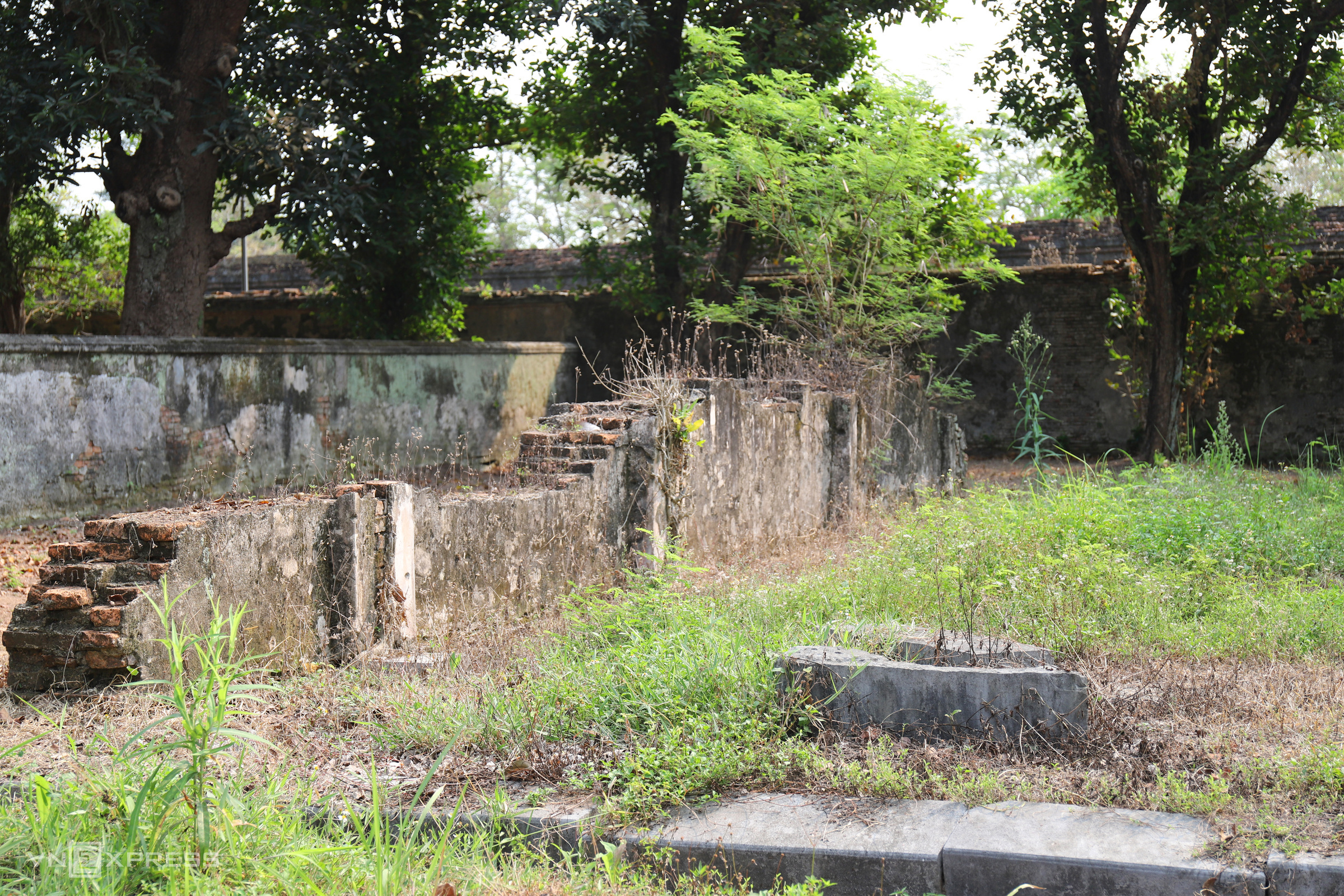